Free Gacha Games Like Genshin Impact Are Designed to Get You to Spend More: Here's How to Take Back Control

Free Gacha Games Like Genshin Impact Are Designed to Get You to Spend More: Here's How to Take Back Control

For the longest time, the global gaming industry has been saturated with games that use the Gacha or loot box system.

FYI: The Gacha or loot box system is where players use real money to roll for a chance to get the ‘best in-game character or items.’

Most of these games are free to play, and yet, there are players that spend hundreds to thousands of dollars on games like Honor of Kings, Fate/Grand Order and Genshin Impact. As such, we cannot not talk about Gacha games without mentioning Genshin Impact; a multi-platform free to play Role-Playing Game (RPG) from Shanghai-based game company miHoYo Limited has taken the world by storm.

According to SensorTower estimates, players around the world have spent about US$245 million (S$330.7 million) on the game in its first month; making it the top-grossing mobile game worldwide since its release.

To put this into context, TikTok’s total worldwide mobile app revenue worldwide in October 2020 was only about US$88m (S$118.8 million).

Out of these paying gamers, 80 per cent of them have spent money on microtransactions, buying in-game items or virtual goods in the past six months.

Why are these players spending so much?

And how do you take back control if you find yourself spending too much on these games?

To start off, we have to understand a little bit more about the Gacha or loot box system and the psychology behind it.

How Free to Play Games Like Genshin Impact Make Money

To start, we need to understand how these free-to-play games make money.

For free to play games, microtransactions are the main revenue source for the publishers.

There are two main types of microtransactions for games.

Some games have non-predatory microtransactions which are generally for decorative purposes and do not have an impact on gameplay or the player’s game experience.

On the other hand, some games have predatory microtransactions as they implement a Gacha or loot box system where you are pressured to buy these items.

This is because developers tend to design these games in a way to make it harder for you to progress without spending money on these Gacha items or loot boxes.

But, buying these Gacha items are no guarantee of you getting the item you desire, only a chance to win it.

The items that you get is derived randomly. which makes effectively makes the microtransaction an investment in luck and probability.

For example, according to PC Gamer, the odds of getting a top-tier character from a ‘wish’ or loot box in Genshin Impact is only 0.6 per cent.

But on balance, you still can enjoy the game without having to spend a single cent like many of my friends have done.

The Allure of Gacha

So what is the Gacha system I was talking about?

The Gacha (loot box) system is where players use real money to roll for a chance to get the ‘best in-game character or items.’

Games that use this system are at times referred to as ‘Gacha’ games, with the name derived from Gashapon or Gachapon machines: Japanese vending machines that dispense toy capsules.

The word ‘Gacha’ originates from the sound the machine makes when you insert a coin and turn the handle to release a capsule toy.

I would hazard a guess to say that the idea behind it is to get people to keep spending money until you get the toy you want.

Here’s how the Gacha system in video games work.

Players spend real money in exchange for a specific amount of in-game currency to ‘roll’ in the Gacha, which will give a player a random character or item.

Personally, I have no qualms about spending money on video games to support the developers of the game.

I see no harm in non-predatory microtransactions for players who want to buy skins to make their in-game character look cooler.

After all, if you enjoy playing the game and spending money on it brings you happiness; more power to you. Just as long as the spending on your games does not exceed your personal budget.

But, the problem lies with the Gacha system which has long been described as ‘predatory.’

There is currently no international consensus on whether the idea of Gacha or loot boxes can be defined as gambling.

In Belgium, the Belgian Gaming Commission has banned loot boxes in games as they were considered games of chance and subject to Belgium’s gambling laws.

In China, the Government announced legislation in 2017, requiring online game publishers to disclose the ‘draw probability of all virtual items and services.’ Subsequently in 2019, the Chinese Government banned the sale of loot boxes to those 8 years or younger and set a maximum monthly spending limit on loot boxes for those under the age of 18.

In Singapore, the Government passed The Remote Gambling Act which bans unlicensed gambling websites and slaps hefty fines on those who do not comply.

The bill also defined gambling as the act of staking “virtual credits, virtual coins, virtual tokens, virtual objects or any similar thing that is purchased…in relation to a game of chance”

But, the then home affairs minister S. Iswaran also clarified the law in parliament stating that:

“the Bill does not intend to cover social games in which players do not play to acquire a chance of winning money and where the game design does not allow the player to convert in-game credits to money or real merchandise outside the game.”

However, the bill’s legislation is cast broadly, which means it could be possibly tweaked to regulate loot boxes in the future.

Whatever the definition, there are concerns about the addictive nature of Gacha or loot boxes.

The Addictive Nature of Loot Boxes

According to Science in The News, a publication from Harvard University, Dopamine is a chemical (neurotransmitter) made by our bodies that plays a key role in motivating behaviour.

Our brains release dopamine to train our brains to avoid bad experiences and seek out desirable and rewarding ones.

As such, it is not being rewarded that causes our body to produce dopamine, but it’s the anticipation of rewarding behaviours like progressing in a game or attaining a top-tier hero is what releases dopamine into many parts of the brain.

Psychologists have raised concerns about the addictiveness of loot boxes, stating that the loot boxes system works on our dopamine system with what they call ‘variable rate reinforcement.’

According to Dr Luke Clark, director at the Center for Gambling Research at the University of British Columbia:

“The player is basically working for reward by making a series of responses, but the rewards are delivered unpredictably,”

He added that “We know that the dopamine system, which is targeted by drugs of abuse, is also very interested in unpredictable rewards. Dopamine cells are most active when there is maximum uncertainty, and the dopamine system responds more to an uncertain reward than the same reward delivered on a predictable basis.”

In other words, the highly unpredictable nature of loot boxes sends our dopamine system into overdrive, as our brains crave the chance of obtaining the uncertain reward.

This creates a reward-seeking feedback loop, as it causes us to want to repeatedly seek out the chance to obtain the feel-good reward.

This feedback loop can be strong, creating a hard to control urge which is also an important factor that leads to the development of addiction.

This is problematic as the odds of getting any top-tier items is really low.

In a bid to obtain that dopamine high, players will keep buying loot boxes until they get what they desire or run out of money.

There is also external pressure, as your friends or twitch streamers might be getting lucky with loot boxes, which might cause you to FOMO.

This may cause you to have the belief that you could get lucky to with the next loot box.

But in reality, the odds are not in your favour.

Generally, players who produce a low level of dopamine naturally might be more prone to the siren song of loot boxes.

This could explain why even though only a small percentage (~two per cent) of the total player base spends on free-to-play games, these game companies still can profit.

These customers are known as ‘whales’, an unflattering term obtained from the world of gambling and casinos. These players spend a lot more than other players, propping up these game companies revenue.

How to Take Back Control

Does this mean you should stop playing these free-to-play games?

Here are some tips for you to enjoy these games responsibly.

A good way to avoid the dopamine feedback loop is for you to think about Murphy’s Law whenever you spend money on a Gacha or loot box microtransaction.

The law states that “Whatever can go wrong, will go wrong.” This is also likely to be true most of the time, due to the low odds associated with Gacha and loot boxes.

Even if you get lucky, you will need to convict yourself to quit while you are winning.

You will need to be content with the belief that spending money on loot boxes will lead to the worst possible result.

After all, repeatedly spending money to obtain that rare one in a million result is a gamble that few if any win.

To prevent overspending, you can set a tight budget for spending on the game.

You will need to religiously track the amount you are spending on the game and make sure that it does not exceed your budget.

This may be a bit extreme, but you might want to create a separate bank account and deposit the amount that you have budgeted for the game.

You can then link the debit card to the game account and also use it for other games you play.

Often, these free to play games are well versed in using manipulative copywriting and marketing tactics to get to spend more.

An example of this would be the massive deals with limited time offers, that are shoved into your face when you open a Gacha game, tempting you with a chance to get the top-tier item you always wanted.

But, they are technically not wrong as a chance is what they are offering. For this, Murphy’s Law applies.

Ultimately, I am not encouraging you to ‘never spend money’ on the game, because if everybody did that, the games will not survive.

Not to mention the amount of time you will have to spend to grind to progress in the game. After all, time is money. 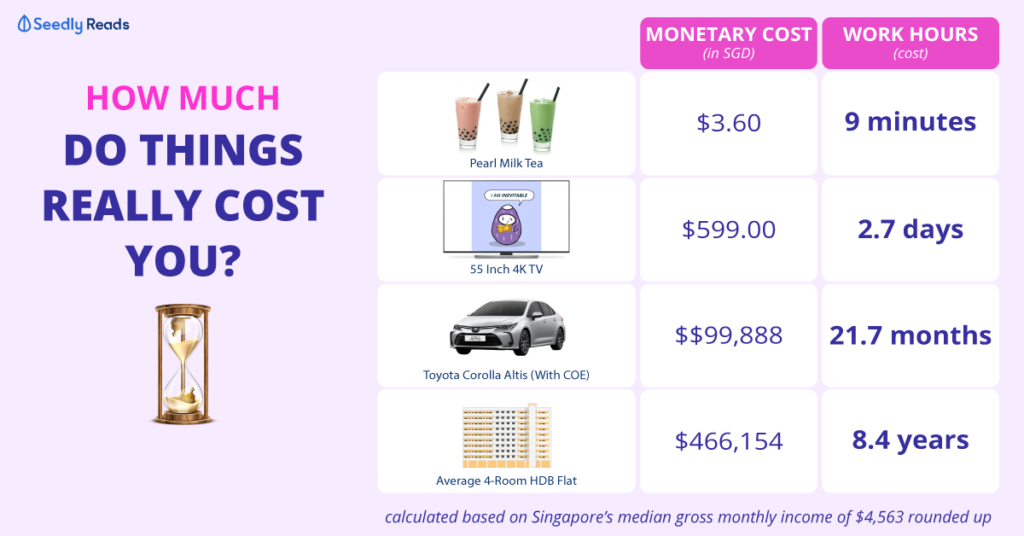 I’m also not encouraging you to spend money either because that feeds the addictive nature of the Gacha game model which remains one of its biggest problems.

Thus, it is important for you to know yourself and follow these tips when playing these games so that you can enjoy them healthily.

Want to Get Good Gaming Lobangs?

Why not join the discussion over at our Seedly Community to connect with fellow savvy gamers!