GE2020 GST Proposals: A Look Into GST Over the Years
39
shares 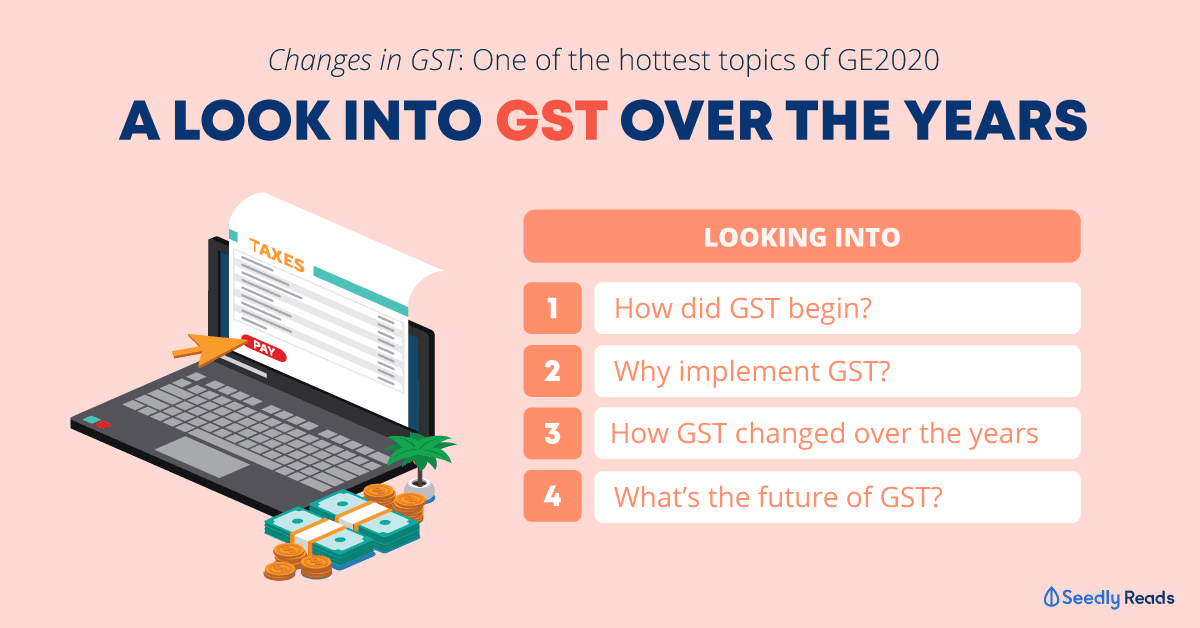 This is one topic that Singaporeans love joking about.

“Whoa, I rather meet a ghost than hear GST increase ah!”

In fact, one of the most common sentences we see amongst Facebook commenters whenever there are government payouts is:

Realising that this is a concern amongst most Singaporeans, most political parties have drafted manifestos which included their take on GST and its future.

Have you ever thought of what GST actually is?

Or how has GST been like over the years?

Let us take you through the journey of GST, and how it has evolved over time.

The Goods and Services Tax (GST) is the broad-based tax levied on the consumption of goods and services in Singapore.

In some countries, this is known as the Value-Added Tax (VAT).

For most items that we buy in the stores, GST is already included in the advertised price.

A few of our favourite online services started including GST earlier this year as well.

There are some GST exemptions too.

This includes the provision of most financial services, the supply of digital payment tokens, the sale and lease of residential properties, and the importation and local supply of investment precious metals.

The Beginning of GST

GST was first introduced in Singapore on 1 April 1994.

This introduction was part of a government reform that intended to shift taxes from an income-based to a consumption-based system in order to boost Singapore’s international competitiveness.

The revenue collected from GST helps to reduce individual and corporate income tax rates, as well as in property tax rates.

By having a consumption-based tax system, it also helps in creating a more resilient tax base as the population ages.

To help Singaporeans cope, the government introduced various measures between 1993 and 1994.

These measures included reductions to existing taxes such as the personal income tax rate and taxes on motor vehicles.

It also included increased grants for lower-income households, and increased subsidies for some public services such as health and education.

The introduction of GST also meant an increase in indirect taxes.

This help Singapore shift from direct to indirect taxes, to maintain its international competitiveness in attracting investments/

GST as Part of a Fair System

As GST is based on the consumption of goods and services, this meant that people would be taxed fairly.

This is solely based on the fact that the person who spends more, pays more taxes.

Over the years, the GST rates saw some changes.

This rate was one of the lowest in the world, as its focus was not to generate substantial revenue but to allow people to be adjusted to the tax.

To help Singaporeans cope with the increases in GST, the government would usually accompany these changes with support packages to mitigate the cost impact of the GST.

Support packages such as government subsidies and GST vouchers are frequently put in place to help keep the cost of living manageable.

While GST increases might seem purely to us as our goods and services becoming more expensive, these increases are often not without rhyme or reason.

During the Budget speech earlier this year, Deputy Prime Minister Heng Swee Keat mentioned that the upcoming increase is mainly to raise the national revenue to support Singapore’s growing spending, particularly for healthcare.

How Would the GST Change in the Future?

The future rates of GST is one of the hot topics for the General Election this year.

All contesting parties had to create the best balance between addressing the concerns of the public, as well as the sustainability of their future plans.

Here’s an overview of what the parties feel towards the issue of GST.

As we can already see, different political parties have different views when it comes to the topic of GST.

So, what would the future of GST be?

Only time will tell.