Glove Manufacturing Stocks in Singapore: What's Next for Them? (Top Glove, Riverstone, and UG Healthcare) 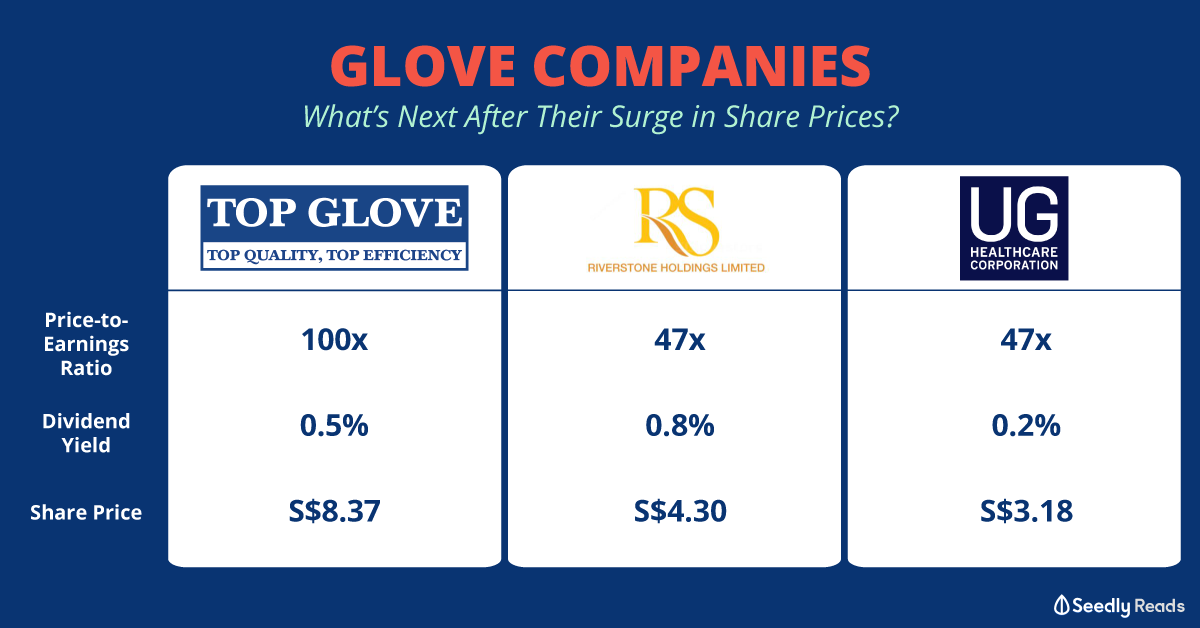 Glove Manufacturing Stocks in Singapore: What's Next for Them? (Top Glove, Riverstone, and UG Healthcare)

Companies involved in glove manufacturing have become extremely popular amid the COVID-19 pandemic.

The market capitalisation of one of the glove manufacturers says it all.

Top Glove Corporation Bhd (SGX: BVA), the world’s largest glove manufacturer, became one of Singapore’s top 10 companies by market cap, as of the end of July 2020.

Apart from Top Glove, there are two other glove manufacturers listed in Singapore.

The Singapore-listed glove manufacturers have seen dazzling returns year-to-date, despite their share price plunge on 12 August reportedly due to Russia rolling out a COVID-19 vaccine.

Here, let’s take a look at each company’s financial results and whether there’s still room for business growth for them.

Top Glove, which was founded in 1991, is a leader in the glove manufacturing industry. It caters to the medical, food and general industrial sectors, and exports its gloves to 195 countries worldwide.

Over the past five years, Top Glove has produced decent growth as seen below (the company has a 31 August year-end):

In its most recent third quarter, the company’s growth ballooned due to the pandemic and increased demand for gloves.

Revenue surged 42% year-on-year to RM 1.69 billion, the highest ever on a quarterly basis, while net profit more than quadrupled to RM 347.9 million.

Top Glove explained that monthly sales orders went up by 180%, resulting in long lead times, which went up from 40 days to around 400 days.

That means that the latest orders placed would only be delivered over a year later.

With strong business growth, Top Glove’s financial position improved significantly, with a net cash position of RM 279 million, as of 31 May 2020, compared with net borrowings in the second quarter of FY2020.

The strengthening of its balance sheet also helped to increase its interim dividend per share to 10 sen, up from 3.5 sen the previous year.

Looking ahead, Top Glove said (emphases are mine):

“Top Glove will continue to expand its capacity to ensure it is well-positioned to fulfil global glove demand, which is expected to grow from a pre-COVID level of 8% to 10% per annum, to 12% to 15% per annum post-COVID, on the back of increased usage in both the medical and non-medical sectors, as well as heightened hygiene awareness.”

Riverstone Holdings, which started in 1989, specialises in the production of cleanroom and healthcare gloves, finger cots, cleanroom packaging bags, and face masks. Its products are widely used in the healthcare, semiconductor, manufacturing, biotechnology and pharmaceutical sectors.

Riverstone has a financial year that ends on 31 December each year. Let’s explore its past financial performance now:

Just like Top Glove, Riverstone increased its interim dividend per share, up from 1.55 sen a year ago to 4.0 sen.

As for its outlook, Riverstone’s executive chairman and chief executive, Wong Teek Son, commented (emphases are mine):

“[O]ur in-house R&D team continues to monitor industry trends closely and develop new products that will allow us to venture into untapped markets including the food processing, pharmaceutical and surgical glove segments. …

There has been a rise in awareness of hygienic practices globally which has led to a higher usage of gloves in the medical as well as other non-medical sectors such as F&B and retail.”

Due to the bright industry outlook and to capture future growth, Riverstone is launching a new three-year expansion plan at a new production site in Taiping, Malaysia.

The expansion is projected to bring Riverstone’s total manufacturing capacity to 14 to 15 billion pieces of gloves by FY2023.

Last but not the least is UG Healthcare, whose gloves are used in industries such as healthcare, food and beverage, and automotive.

The company attributed the strong financial growth to higher volume and selling price of gloves amid the coronavirus pandemic.

With the surge in demand, it is bringing forward its production capacity expansion plans from June 2021 to March 2021.

It is also expediting a further expansion to bring its total production capacity to 4.6 billion gloves per year by either FY2021 or the beginning of the first quarter of FY2022.

What’s Next for the Glove Companies?

While the glove manufacturers have seen robust growth in their businesses in the past few months, in my opinion, it is highly unlikely to be sustained for the long-term.

Once demand tapers off, revenue would tumble.

And I don’t think the demand for gloves from the rise in awareness of hygienic practices post-pandemic would make up for the demand directly due to COVID-19.

Right now, shares of Top Glove, Riverstone, and UG Healthcare look like they are priced for perfection, with valuations more than double their five-year averages.

When business growth tapers off, their share prices could come crumbling down to Earth.

And may never recover.

So investors have to be aware of the valuation risk for these glove companies.