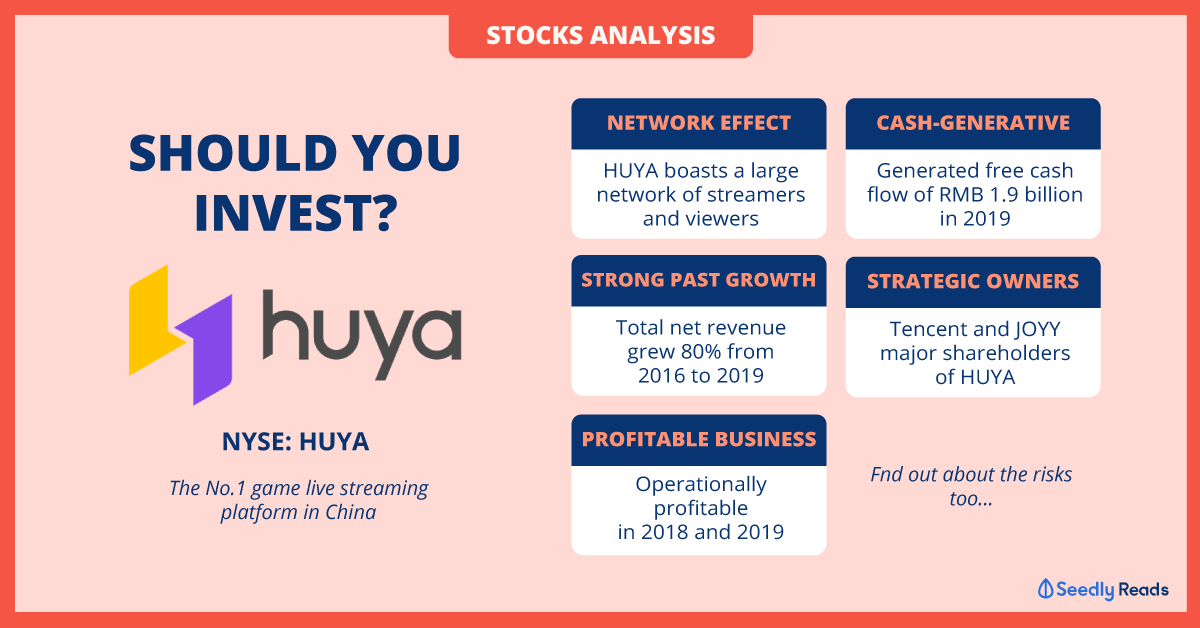 One company that is likely to benefit from this is HUYA Inc (NYSE: HUYA).

Instead of competing directly with other gaming companies, HUYA Inc is a gaming streaming platform where gaming fans can watch live video game content.

It earns money by selling advertising space, and virtual items to users.

HUYA is one of two (the other being DouYu) dominant live-game streaming platforms in China.

As a leading player in the Chinese game streaming industry, HUYA boasts a large network of streamers and viewers. This has resulted in a network effect.

Streamers create content for viewers, which leads to more viewers.

The ability to reach a larger audience attracts more streamers to choose HUYA as their streaming platform.

More streamers lead to more content for viewers, and round and round the flywheel goes.

HUYA has demonstrated that it has been able to use its industry-lead to great effect.

The monthly average users on its platform, HUYA Live, grew 28.8% to 150.2 million in the fourth quarter of 2019 compared to the same period a year ago.

The number of paying users increased fairly proportionately by 27.6% to 13.4 million.

Putting everything together, HUYA’s revenue from live streaming (virtual gifts) spiked by 79.5% in 2019.

The strong growth is nothing new for HUYA as it merely extends its winning streak of growth since 2016.

Source: Author compilation of data from F-1 and 2019 annual report

HUYA’s amazing growth is one thing but, to me, the most important aspect of any business is whether it has cost structures that enable it to turn a profit. HUYA ticks this box.

The Chinese live gaming streaming platform was operationally profitable in 2018 and 2019.

Margins have also started to widen as HUYA starts to enjoy economies of scale.

In the first quarter of 2020, HUYA reported an operating profit margin of 5.8% compared to just 1.8% in the same quarter last year.

As HUYA continues to increase its topline, I expect margins to improve substantially as its operating expenses increase much slower than revenue.

As of 31 March 2020, HUYA had no debt, and RMB 10.3 billion (US$1.45 billion) in cash, cash equivalents, restricted cash, short-term deposits, and short-term investments.

It also generated around RMB 1.9 billion in free cash flow in 2019.

HUYA has been producing positive operating cash flow and free cash flow since 2017.

With its strong cash position and the ability to generate cash from its core business, HUYA has the financial muscle to continue spending on expanding its product offering and to grow its user and streamer base.

Another thing that HUYA has going for it is that Tencent Holdings (SEHK: 0700) is its majority shareholder.

In April this year, Tencent exercised its option to acquire an additional 16.5% of shares from HUYA’s previous owner, JOYY.

After the transfer of shares, JOYY Inc (NASDAQ: YY) has 43% total voting power, while Tencent has 50.9% of the voting rights.

It owns some of the biggest game developers in the world such as Riot Games, which owns League of Legends.

Tencent also has strategic stakes in game developers such as Supercell (the makers of Clash of Clans) and Epic Games (whose platform was used to develop Fortnite).

I think that HUYA can leverage its relationship with Tencent to further consolidate its position as one of the top video game live streaming platforms in China.

A discussion about any company will not be complete without talking about the risks.

As a Chinese company listed in America, the big risk that everyone is talking about is the possibility that Chinese companies may be forced to delist from the US stock market.

On top of that, Chinese companies listed in America do so via American depository receipts (ADRs), which in turn own an interest in a variable interest entity (VIE).

This VIE has contractual rights to participate in the economic interests of the actual operating company in China.

The structure is really complex, and there could be potential loopholes where certain parties can use to exploit owners of the ADRs.

Although this has not been done before for HUYA, there is that possibility that investors need to be aware of.

Moreover, if China’s regulatory authorities should deem the VIE contracts to be invalid in the future, owners of the ADRs could be wiped out.

There is execution risk too. HUYA is still a relatively young company and was only listed in 2018.

In addition, Chinese companies face regulatory risks that could derail its growth.

The Chinese government has been known to implement very strict rules on internet companies – that could potentially disrupt HUYA’s business.

Competition is another factor to keep in mind.

For now, HUYA enjoys a strong position as one of two big players in this space in China.

But things could change if new entrants emerge that somehow have a better platform and are able to attract streamers.

I’m keeping an eye on HUYA.

It operates in a fast-growing market and I expect to see double-digit growth for at least a few years.

In addition, the company is already profitable, has enough cash on its balance sheet for expansion, and has strategic shareholders that it can leverage.

On HUYA’s valuation, the company currently trades at around 3.3 times 2019’s revenue.

Based on its current gross margin of around 18% and the potential economies of scale as it grows, I think HUYA can easily settle at a 10% operating margin.