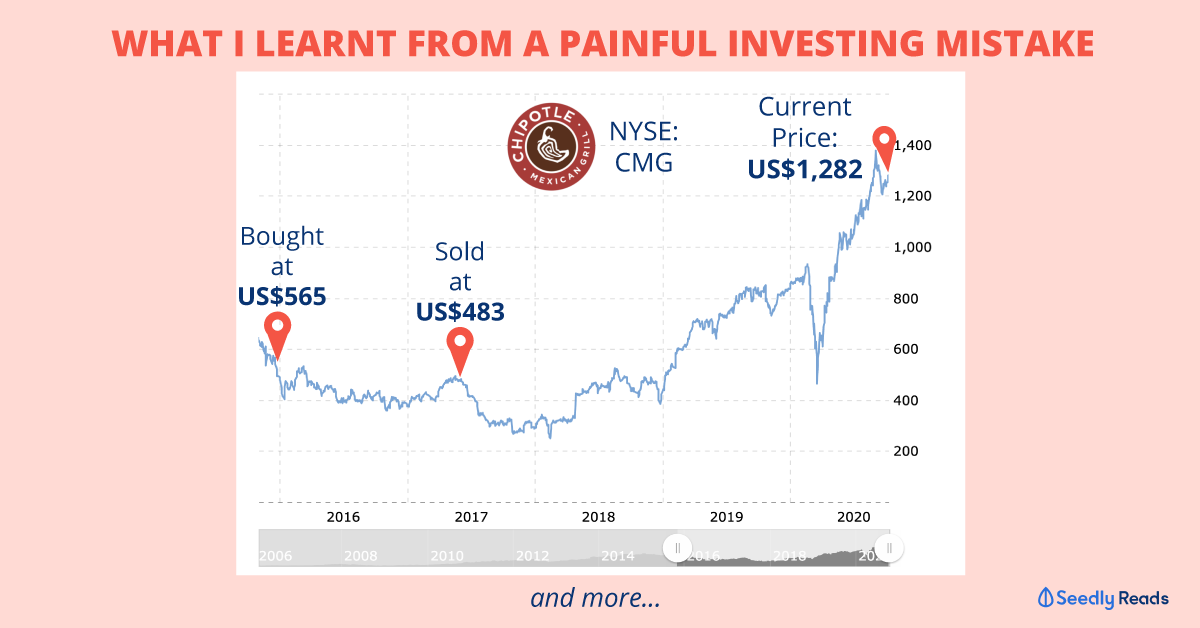 I’ve made my share of mistakes while investing that ended up as expensive lessons.

In this article, I share one particularly painful mistake and three lessons that I took from it.

At that time, Chipotle’s share price had fallen 25% from its peak following a Salmonella outbreak at one of its outlets. As such, I managed to pick up shares at US$565 per share, compared to the previous high of US$749.

I had been eyeing Chipotle for some time and thought that it was a great opportunity to buy shares.

Chipotle was a fast-growing fast-casual restaurant chain in the US that still had a huge market opportunity to expand into.

Its food – Mexican fare- were popular and its comparable sales stores were consistently in the mid-to-high single digits or higher.

The company was ambitiously expanding its store footprint in North America.

I also thought the decline in its share price was unwarranted and that its sales would not be that greatly impacted due to an isolated food-safety incident.

Unfortunately, Chipotle suffered a few more setbacks shortly after I bought my shares. The company reported another four separate E- Coli and norovirus outbreaks at its restaurants.

The news spread across the country and customers started being cautious about going to Chipotle.

A Challenging Period for Chipotle and Selling My Shares

What I thought was going to be a mild bump on the road for Chipotle, ended up being an extended period of depressed sales.

The effects of negative publicity hurt Chipotle’s bottom line hard. Chipotle reported its first quarterly loss as a public-listed company in the first quarter of 2016.

Same-store sales declined 30% from a year ago. Marketing campaigns to get customers back in stores were not cheap either.

Stores that once had long queues were now empty and Chipotle had to resort to country-wide marketing campaigns and offering 1-for-1 burrito deals to bring customers back. The efforts had minimal impact and I was getting worried that customers will not come back.

Unsurprisingly, investors were getting nervous too. Chipotle’s share price fell from the price I bought to a low of US$370 in mid-2016.

Chipotle’s share price eventually climbed to US$483 in May 2017 and I took the opportunity to sell my shares.

At that time, Chipotle’s shares – despite having a price 15% lower than my purchase – still seemed too expensive for me.

Chipotle’s shares traded at 48 times forward earnings (due to the depressed earnings at that time) and I lost confidence in the company’s growth prospects.

A Turn of Fortunes

This is not a story of me buying a company that ended up a poor investment. It actually is a tale about me not giving my investment time to fulfil its potential.

I knew from the get-go that Chipotle was well-loved by customers. An American friend of mine who was living in Europe at that time constantly told me the thing he missed most about the US was Chipotle.

Chipotle was a brand that was loved – and its customers would eventually come back. After a change in CEO in March 2018, Chipotle’s fortunes changed dramatically. Its marketing efforts started to pay dividends. The company grew its online sales channels, and drive-throughs fueled an increase in sales.

You can probably guess what has happened to its share price. Chipotle’s shares today trade at around US$1,282 apiece, almost three times the price I sold my shares at.

Although I technically lost only 15% of my investment in Chipotle, I had in fact missed out on a more than 162% gain by selling early.

That’s an extremely expensive mistake, especially when I consider that I would have been much better off doing nothing, rather than actively trying to manage my portfolio.

From this experience, I took away three important lessons.

Customers love Chipotle. That’s an important reason why Chipotle was well-placed to recover from the bad press after the food-safety outbreaks at its restaurants.

In addition, Chipotle was determined to improve its food safety and the steps taken also regained customer confidence.

Lesson 2: Give Companies Time to Prove Their Worth

I held Chipotle’s shares for a mere one-and-a-half years.

That’s not enough time to allow a company to prove itself. I should have been more patient and given management more time to turn the company around. Given that Chipotle was a brand that customers loved, it was only a matter of time before queues started returning.

“Time is the friend of the wonderful company, the enemy of the mediocre.”

Wall Street’s focus on quarterly results can lead to wild gyrations in the stock prices of companies. This miss by a penny, beat by a penny compulsion can lead to a significant price-value mismatch between a company’s long term value and its share price.

Clearly, my decision to sell Chipotle’s shares was because I was focused on the company reporting negative same-store sales growth over a year, rather than looking much further into the future.

“The trick is, when there is nothing to do, do nothing.”

It is often tempting to actively manage our portfolios. But moving in and out of stocks due to short-term gyrations in price and earnings is a fool’s game.

It is not only time-consuming but may also end up as expensive mistakes. I certainly learnt that the hard way with Chipotle.

I hope that by sharing some of the lessons I learnt from this mistake, other investors will not fall victim to the same expensive mistake that I made.