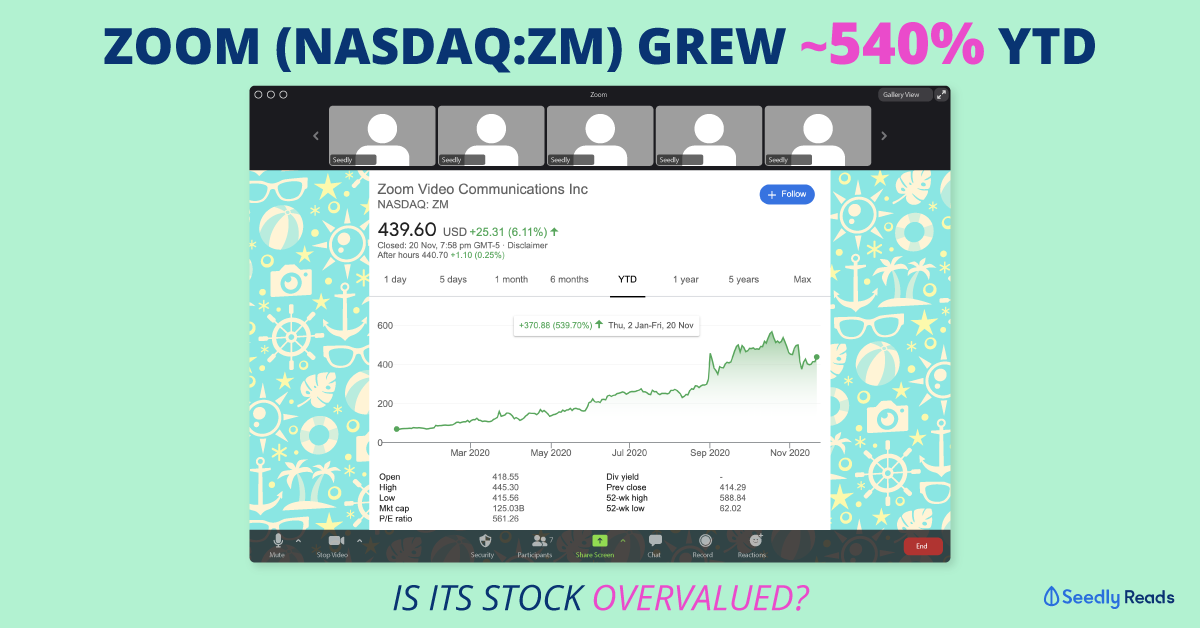 Zoom Video Communications Inc (NASDAQ: ZM) is one of the hottest stocks this year and is up by about 540 per cent year-to-date (20 Nov 2020 close). 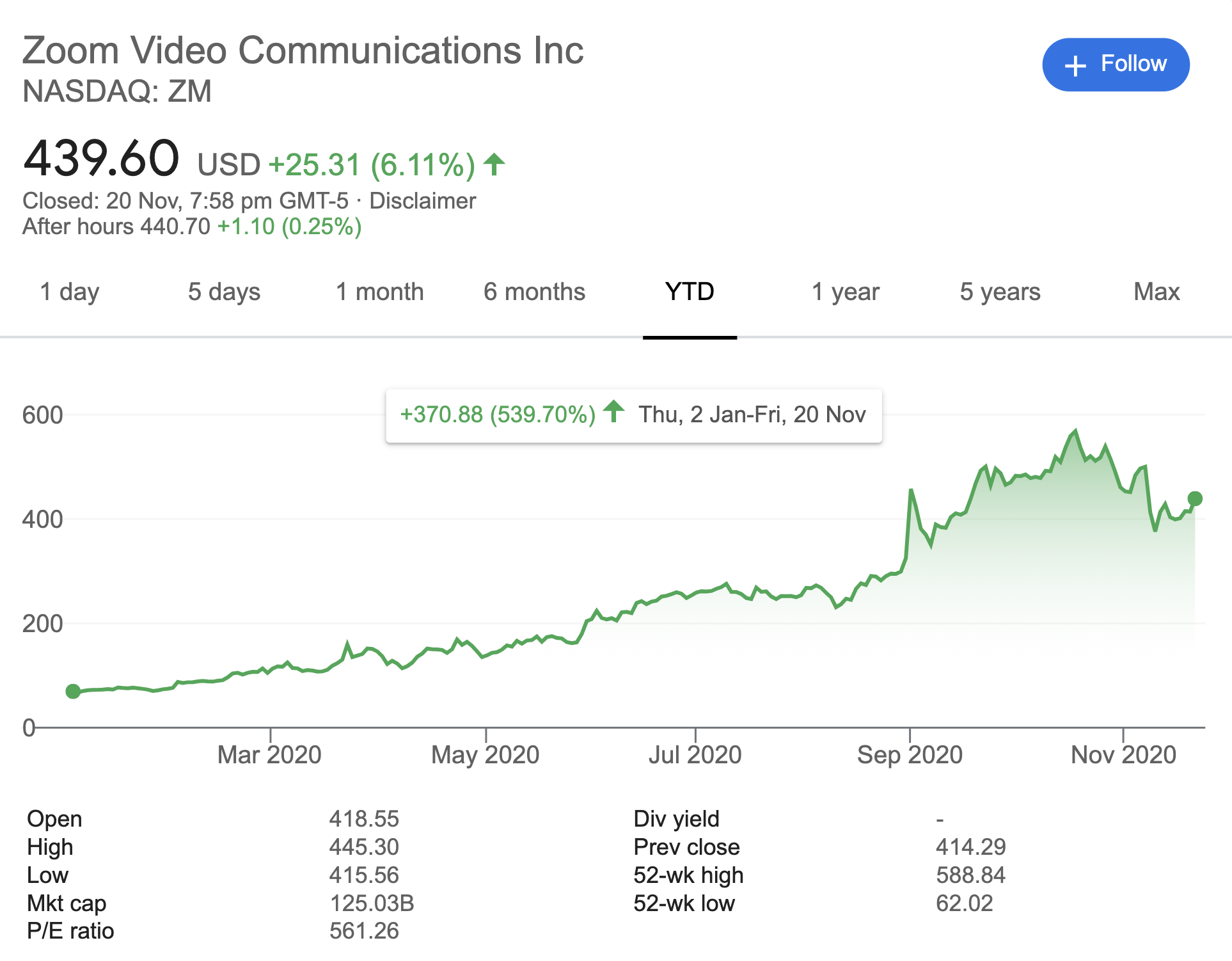 Does it still have legs to run?

Zoom Video Communications Inc has been on a roll this year. The video conferencing software-as-a-service (SaaS) company has been one of the main benefactors of the COVID-19 pandemic.

In the quarter ended 30 April 2020, Zoom’s revenue increased by a mind-boggling 169 per cent from the corresponding period a year ago.

But that wasn’t all. In the very next quarter ended 31 July 2020, Zoom again blew past expectations, reporting a 355 per cent increase in revenue.

Unsurprisingly, investors have reacted sharply to the news, sending Zoom’s stock price up by about 540 per cent since the turn of the year.

To put that in perspective, the Singapore stock market’s largest company by market capitalisation, DBS Group Holdings Ltd (SGX: D05), is only valued at S$61 billion.

Zoom was born just nine years ago in 2011 while DBS took 52 years to get to where it is today.

The question now for investors is this: is Zoom overvalued?

In March this year, I preached conservatism when it came to Zoom. The company, then, had a market cap of around US$38 billion (S$51 billion). It had just doubled in value and I was concerned that investors were getting too optimistic.

Looking back, I was way too conservative in my growth projections.

Zoom went on to blow past consensus expectations in the two quarters after that, as I had described earlier, far exceeding what some of the biggest bulls had expected.

Zoom has become more than just a company, it has become a verb. Even my non-techy parents use “Zoom” as a synonym for video conferencing.

Since my article, Zoom has more than quintupled in value.

After seeing the quick pace of adoption, my blogging partner, Ser Jing, and I decided that Zoom was worthy of a place in our investment fund’s portfolio.

We bought our first tranche of shares at US$254, which was then close to an all-time high and have added more since. Today, Zoom’s shares trade at around US$401.

From Skeptic to Believer

I used to be one of the sceptics when it came to Zoom’s valuation but I am now firmly in the opposite camp.

In fact, I think that even after the recent run-up in its share price, Zoom can still provide significant value for long-term investors.

Even after accounting for any one-off jump in collections for the quarter, I think Zoom can settle at a free cash flow margin of close to 40 per cent at its steady state.

By most accounts that seems like a high multiple to pay. But let’s not forget that Zoom has immense business momentum in its favour.

The company just grew by a staggering 355 per cent in the last quarter and in its recent Zoomtopia customer and investor day event, the company let slip that usage is up since then.

Can Zoom Continue To Grow?

Zoom has undoubtedly been one of the benefactors of shelter-in-place measures enacted by governments around the world to combat COVID-19.

But even after life returns to normal, I believe Zoom will still be a mainstay for most companies. Video conferencing has become a norm due to the ease and practicality of its use.

In fact, many companies have announced that they will permanently adopt work-from-home or hybrid work settings, allowing employees to spend either all or part of their time working from home.

Although Zoom’s growth will understandably slow when the pandemic passes, I believe the company will still see decent growth well into the future as video conferencing becomes even more prevalent for businesses and individuals alike.

Zoom is also barely scratching the surface of its total addressable market.

In its IPO prospectus released last year, Zoom stated that it is addressing a US$42 billion (S$56.3 billion) communications market, according to independent market researcher International Data Corporation.

But I believe the US$42 billion (S$56.3 billion) figure understates the increasing number of use cases that video conferencing addresses.

The pandemic has demonstrated that video conferencing software can be used for education, telemedicine, fitness classes, and many more purposes than previously imagined.

Given the momentum in video conferencing, I think it is not beyond Zoom to quadruple its annual revenue and free cash flow run rate in five years to north of US$10 billion and US$4 billion respectively.

More importantly, I don’t see its growth stopping there. Zoom’s CEO, Eric Yuan, and his crew are highly innovative and have already recently released new products such as Zoom Phone and Zoom hardware to expand its addressable market.

However, for a company that is growing as fast as Zoom is, the next 12 months will look very different from the last 12, so we certainly shouldn’t be looking backwards to come up with a valuation.

Looking beyond the next 12 months, Zoom’s growth will likely endure as it seeks to win its share of the more than US$42 billion (S$56.3 billion) market opportunity ahead of it.

Competition remains a threat to Zoom, given that Zoom users can just as easily switch to an alternate software.

But, I believe that Zoom’s relentless pursuit of customer satisfaction and its superior product gives it a big leg up over its competitors. Zoom boasts a net promoter score of 62, the highest among video conferencing software that I’ve seen.

Zoom’s branding is also remarkably strong at the moment. Like Google, Zoom has become a verb, which is a fact that shouldn’t be underestimated.

Although there is invariably a chance that Zoom can lose its focus on satisfying customers, and competition can erode growth, the pie is large enough for multiple winners in this space.

Given all this, and the momentum behind Zoom, I think that the odds of its success far outweigh the risks.

If you have any questions about this stock and other stocks in general, why not head over to the Seedly to discuss them with like-minded individuals?