This Investing Great Produced an Annual Return of 23% Over 47 Years: Here Are 3 Lessons From How He Invests 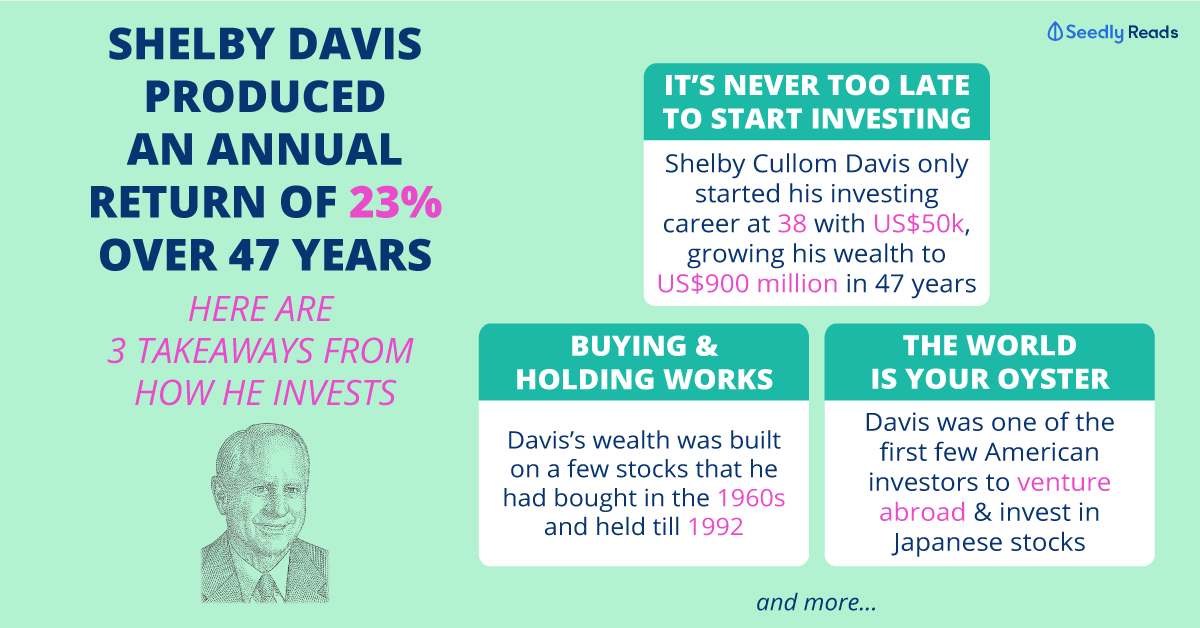 This Investing Great Produced an Annual Return of 23% Over 47 Years: Here Are 3 Lessons From How He Invests

Since then, I’ve realised that he’s seldom mentioned when people talk about the greatest investors.

This is a pity because I think he deserves a spot on the podium alongside the often-mentioned giants such as Warren Buffett, Benjamin Graham, Charlie Munger, and Peter Lynch.

Davis’s story is well-chronicled by John Rothchild in the book, The Davis Dynasty.

In a span of 47 years, Davis managed to grow his wealth at a stunning rate of 23% annually by investing in stocks.

There are wonderful investing lessons found in The Davis Dynasty and there are three that I want to share in this article.

1. It’s Never Too Late To Start Investing if You Do It Correctly

Warren Buffett was a whiz kid. He started his own investment partnership at the ripe “old” age of 26 in 1956.

But not everyone starts young like Buffett. If you think you’re too old to start investing because you need to draw upon your savings as you approach retirement, take heed.

Davis only started his investing career at 38 – without prior experience – and went on to build an immense fortune.

The secret of Davis’s success is that he started investing with a sound process.

He was an admirer of Benjamin Graham, Buffett’s revered investing mentor.

Just like Graham, Davis subscribed to the discipline of “value investing”, where investors look at stocks as part-ownership of businesses and sought to invest in stocks that are selling for less than their true economic worth.

Davis’s preference was to invest in growing and profitable companies that carried low price-to-earnings (P/E) ratios.

He called his approach the ‘Davis Double Play’ – by investing in growing companies with low P/E ratios, he could benefit from both the growth in the company’s business as well as the expansion of the company’s P/E ratio in the future.

Davis also recognised the importance of having the right behaviour.

He ignored market volatility and never gave in to excessive fear or euphoria. He took the long-term approach and stayed invested in his companies for years – even decades, as you’ll see later – through bull and bear markets.

Davis’s experience shows that it is a person’s behaviour and investing process that matters in investing, not their age.

For those who are 65 at the moment, the average life expectancy is 21.1 years.

So, most people approaching retirement, or even those who are already retirees, will likely still have decades to invest. 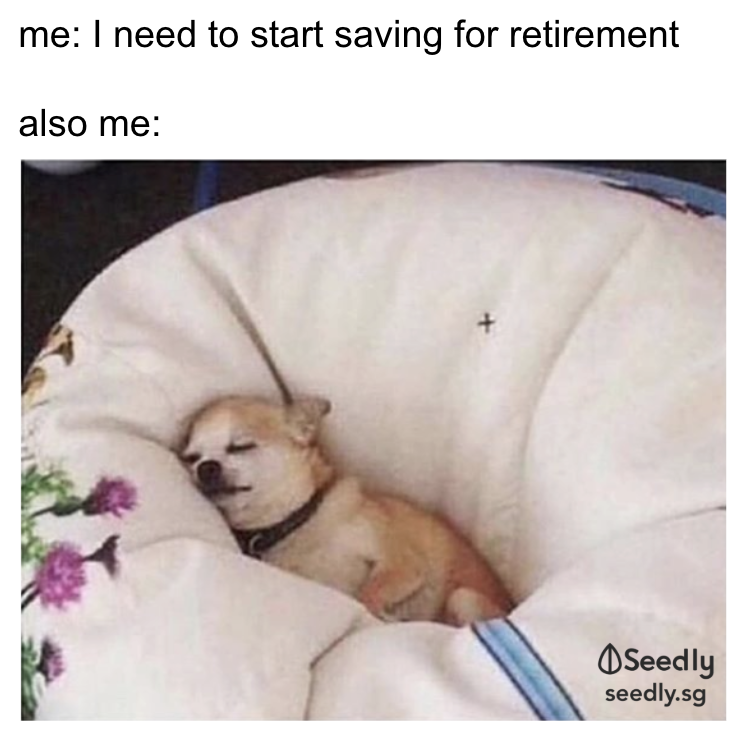 If they can use a portion of their retirement savings (and only just a portion!) to invest in stocks with the right behaviour and process, the investments could provide an additional income stream through dividends and/or a better tomorrow through capital appreciation.

The stock market will almost surely decline steeply from time to time (volatility is normal!).

But investors with a sound process, regardless of age, should still stand a great chance of coming out ahead.

In The Davis Dynasty, John Rothchild wrote that the foundation for Davis’s wealth was built on a few stocks that he had bought in the 1960s and held till 1992.

The journey was rough for Davis. His portfolio shrunk from US$50 million to US$20 million during the vicious bear market that US stocks experienced in the early 1970s.

But he watched unmoved. Instead of selling, Davis bought shares of undervalued companies very aggressively during the bear market, while holding on to the stalwarts he had purchased in the 1960s.

Davis knew that the companies he had invested in were still solidly profitable with bright growth prospects.

He saw no reason to sell their shares during the bear market. 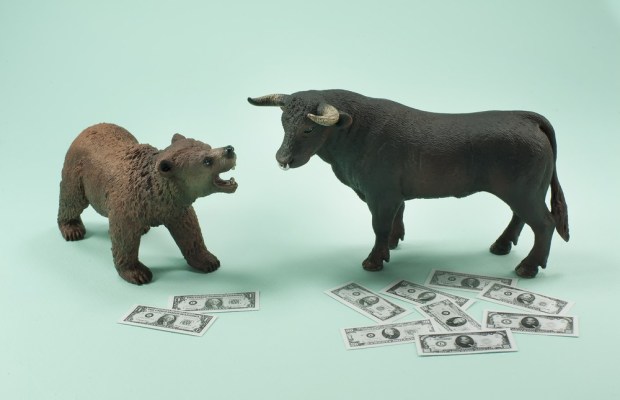 He was confident that their value would be far greater in the future because his investment focus was on companies with excellent management, good returns on capital, and a strong balance sheet.

These are attractive company-traits for long-term investors.

His experience during the 1970s bear market, and the eventual wealth he built, is a great reminder that a long-term buy-and-hold approach to investing will work if your investing process is sound.

3. The World is Your Oyster

In 1962, Davis travelled to Japan and learnt about Japanese insurance companies that had solid operations because of governmental support.

He used the knowledge gained from his investing experience in the US to analyse the Japanese insurance companies.

At the time, American investors only had eyes for American companies. Their thinking was that investing in foreign stocks was too risky. But Davis thought differently. He saw value in the Japanese insurance companies.

He ended up investing in four insurers for around US$2 million in total. They are:

Davis held them for more than three decades. By 1992, they were worth a combined US$75 million.

Davis was not the only American investor, decades ago, who dared to venture abroad. Sir John Templeton, an investing legend who achieved a 15.4 per cent annualised return from 1955 to 1992, was also a renowned global stock picker.

In my recent article, What COVID-19 Hasn’t Changed, I wrote:

“The concept of geographical diversification is particularly important for Singapore investors. Look at the stocks in our local stock market benchmark, the Straits Times Index. There’s no good exposure to some of the important growth industries of tomorrow, such as cloud computing, DNA analysis, precision medicine, e-commerce, digital advertising, and more.”

There are risks associated with international investing and we should not be blind to them. Understanding an overseas-based company may be tougher. Currency fluctuations can also hurt our returns.

But these risks can be mitigated by finding great companies to invest in.

We shouldn’t constrain our investing activities by geography.

There’s so much more about investing that we can learn from Shelby Cullom Davis’s life experiences than what I’ve covered here.

But if I were to summarise what I’ve shared in one short sentence, it will be this: Invest for the long run with the right process, and never let age or geography dictate your investing opportunities.

If you have any questions about investing, why not head over to the Seedly to discuss them with like-minded individuals?