Should You Short the Stock Market? 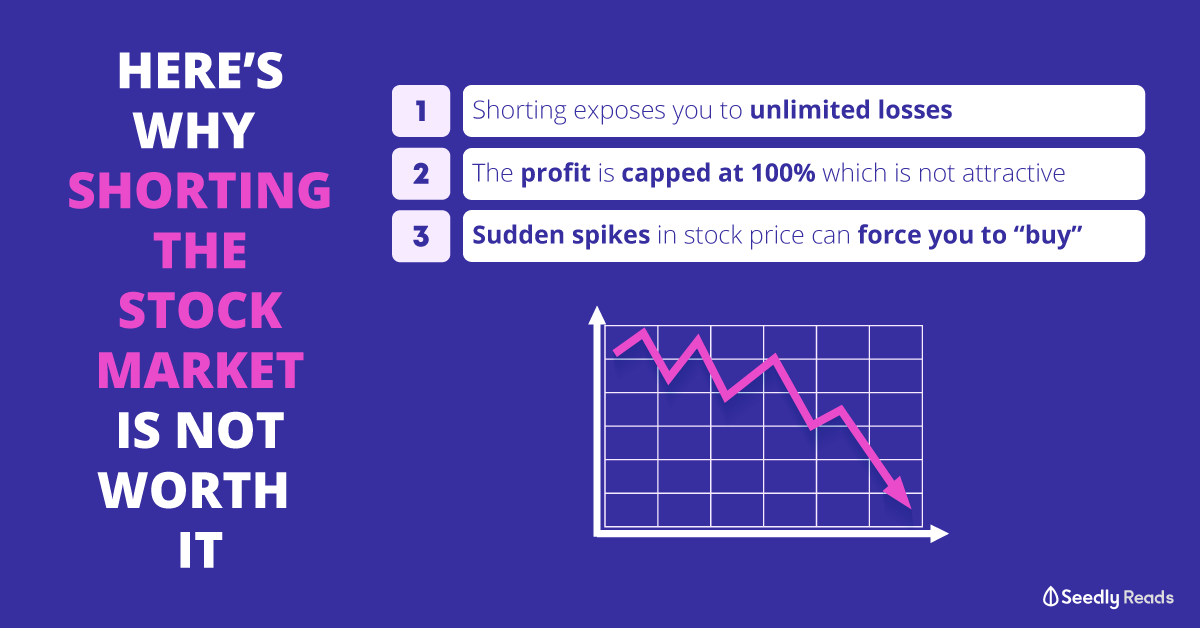 Should You Short the Stock Market?

[Editor’s note: The article originally appeared on The Good Investors blog on 11 June 2020.]

There’s a big mismatch between what is going on in the American stock market and economy, so some investors may be asking if now’s a good time to short stocks.

(To short a stock means to invest with the view that its price will fall.)

These are unprecedented times.

But before you start shorting stocks, here is a reminder of the risks of shorting.

“The market can remain irrational longer than you can remain solvent”

I think its important to remind ourselves that shorting a stock can provide an upside gain of 100%, but it has unlimited downside risk.

If you short a stock and it climbs by more than 100%, you would have lost more than 100% of your starting capital. And that may happen more often than you imagine.

Hertz, the car rental company that filed for bankruptcy protection last month, has seen its share price climb by more than 600% from its 26 May 2020 low.

Let’s also not forget that even if your short position ultimately ends up correct, you will need to endure stomach-churning volatility. This could cause you to have to put up much more capital – to maintain the short position – in order to earn a small return.

In addition, if the stock climbs and you run out of cash to back your position, your broker could force-close your position, leaving you with a loss.

It may also take years for a short position to eventually pay off, giving investors a very small annualised return if the stock does fall.

Professional Investors Are Not Immune to Huge Losses

Herbalife is a company that sells nutritional products through a multi-level marketing scheme. In this marketing model, consumers can earn a commission by referring friends to purchase the company’s products.

Ackman believed that Herbalife was so aggressive in recruiting sellers that most of its sales came from people who wanted to earn from the commissions, and not because they wanted to use the products they bought.

These “customers” simply bought the products so that they could try to sell them and earn commissions.

Ackman started his short on Herbalife in 2012 and gave a now-infamous 3-hour long presentation in 2014 on why he believes the company is a pyramid scheme.

A pyramid scheme is effectively a scheme where only the top of the pyramid gets rich at the expense of those at the bottom of the pyramid.

Although I [Jeremy Chia of The Good Investors] personally believe that Herbalife’s marketing methods were aggressive and could be labelled as unethical, it wasn’t illegal.

Ackman’s Herbalife bet was also made more complicated when billionaire investor Carl Ichan took a long position and snapped up over a quarter of the company’s shares.

First of all, it is extremely difficult for Ackman or the authorities to prove that Herbalife was operating a pyramid scheme as long as there was a product at the end of it all.

In this case, even though many Herbalife distributors ended up buying nutritional products that they did not consume, the company can say it was legitimately selling the products to them.

It may not be an ethical business (in my eyes) but the authorities did not think it was a fraudulent one either.

Ackman’s fund, Pershing Square, ended up losing US$1 billion on its short bet on Herbalife.

Short positions may also face sudden spikes in a stock’s price arising from a short squeeze.

The spike in price can be sudden and swift, and many short sellers will have no choice but to close their positions with a hefty loss.

An example that comes to mind is Tesla’s stock.

Tesla has been one of the most shorted stocks in recent years. However, there have been numerous days when Tesla’s stock has seen a sharp and swift rise in price.

Some of these sharp rises were due to good news coming from the company. But it’s likely that the increases also had contributions from short sellers being forced to close their positions.

We are living in strange times.

The S&P 500 is now showing a positive return so far in 2020, while the NASDAQ is above its pre-COVID-19-crisis level.

With many economies still in partial lockdown, investors are wondering why stock prices are not reflecting the current economic contraction.

However, if you are tempted to short the market, it is important to know the risks involved.

Shorting can be a profitable activity, but is also filled with risks.

Personally, as a long-term investor, instead of trying to make a little money shorting stocks, I prefer buying quality stocks for the long term where the odds of success are much more heavily stacked in my favour.