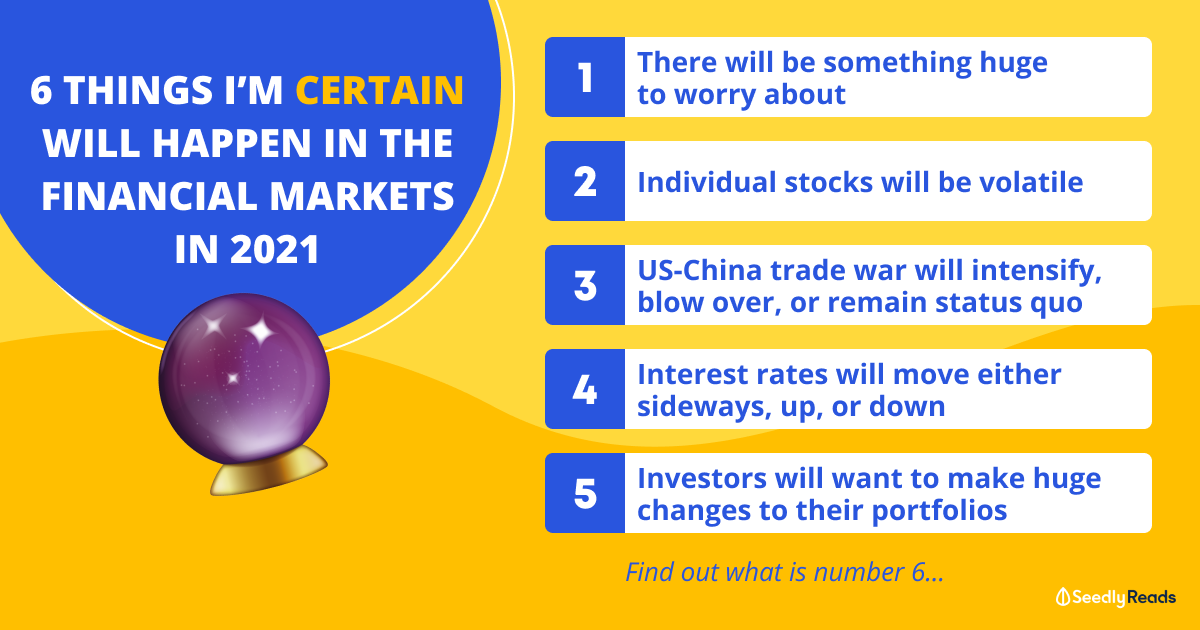 There are so many things that can happen, but here are six things that I’m certain will happen in the financial markets in 2021. In December 2019, I published 6 Things I’m Certain Will Happen In The Financial Markets in 2020.

The content of the article is a little cheeky because it describes incredibly obvious things, such as “interest rates will move in one of three ways: sideways, up, or down.”

But I wrote the article in the way I did for a good reason.

A lot of seemingly important things in finance, things with outcomes that financial market participants obsess over and try to predict, actually turn out to be mostly inconsequential for long-term investors.

I thought the article is important to help investors develop perspective on what’s going on in the markets, so I shall write one again for 2021! If you’ve read the 2020 version, you’ll find a lot of the content to be similar – but you can treat it as a refresher anyway!

If this is new to you, then let me introduce you to my absolutely broken but still useful crystal ball…

Here are six things I’m certain will happen in the financial markets in 2021:

1. There Will Be Something Huge to Worry About

Peter Lynch is the legendary manager of the Fidelity Magellan Fund who earned a 29% annual return during his 13-year tenure from 1977 to 1990.

“There is always something to worry about. Avoid weekend thinking and ignore the latest dire predictions of the newscasters. Sell a stock because the company’s fundamentals deteriorate, not because the sky is falling.”

Imagine a year in which all the following happened:

(1) The US enters a recession;

(3) the price of oil doubles in three months.

Well, there’s no need to imagine: They all happened in 1990.

And what about the S&P 500? It has increased by nearly 950% from the start of 1990 to today, even without counting dividends.

And as a reminder, 2020 has been a year of upheavals in the global economy.

Nearly the entire world is currently struggling with COVID-19 and the pandemic has caused significant contractions in economic activity in many countries, with unemployment also being a serious problem.

The USA is one of the worst-hit countries, yet the US stock market has risen.

The gain from the start of 1990 to December 2020, as I showed just above, has increased to 950% – in the midst of an unprecedented pandemic.

There will always be things to worry about. But that doesn’t mean we shouldn’t invest.

2. Individual Stocks Will Be Volatile

In other words, Amazon’s stock price had suffered a double-digit fall every single year.

If you’re investing in individual stocks, be prepared for a wild ride. Volatility is a feature of the stock market – it’s not a sign that things are broken.

3. The Us-China Trade War Will Either Remain Status Quo, Intensify, or Blow Over

“Seriously!?” I can hear your thoughts.

But I’m stating the obvious for a good reason: We should not let our views on geopolitical events dictate our investment actions.

But, don’t just take my words for it. Warren Buffett himself said so.

In his 1994 Berkshire Hathaway shareholders’ letter, Buffett wrote (emphases are mine):

“We will continue to ignore political and economic forecasts, which are an expensive distraction for many investors and businessmen.

Thirty years ago, no one could have foreseen the huge expansion of the Vietnam War, wage and price controls, two oil shocks, the resignation of a president, the dissolution of the Soviet Union, a one-day drop in the Dow of 508 points, or treasury bill yields fluctuating between 2.8% and 17.4%.

But, surprise – none of these blockbuster events made the slightest dent in Ben Graham’s investment principles. Nor did they render unsound the negotiated purchases of fine businesses at sensible prices.

Imagine the cost to us, then, if we had let a fear of unknowns cause us to defer or alter the deployment of capital. Indeed, we have usually made our best purchases when apprehensions about some macro event were at a peak. Fear is the foe of the faddist, but the friend of the fundamentalist.

A different set of major shocks is sure to occur in the next 30 years. We will neither try to predict these nor to profit from them. If we can identify businesses similar to those we have purchased in the past, external surprises will have little effect on our long-term results.”

Buffett’s disciplined focus on long-term business fundamentals – while ignoring the distractions of political and economic forecasts – has worked out just fine.

4. Interest Rates Will Move in One of Three Ways: Sideways, Up, or Down

“Again, Captain Obvious!?” Please bear with me. There is a good reason why I’m stating the obvious again.

Much ado has been made about what central banks have been doing and would do, with their respective economies’ benchmark interest rates. This is because of the theoretical link between interest rates and stock prices.

In theory, when interest rates are high, the valuation of stocks should be low, since the alternative to stocks – bonds – are providing a good return. On the other hand, when interest rates are low, the valuation of stocks should be high, since the alternative – again, bonds – are providing a poor return.

But if we’re long-term investors in the stock market, I think we really do not need to pay much attention to what central banks are doing with interest rates.

There’s an amazing free repository of long-term US financial market data that is maintained by economics professor and Nobel Prize winner Robert Shiller.

His data contains long-term interest rates in the US as well as US stock market valuations going back to the 1870s.

The S&P 500 index is used as the representation for US stocks while the cyclically adjusted price earnings (CAPE) ratio is the valuation measure. The CAPE ratio divides a stock’s price by its inflation-adjusted average earnings over a 10-year period.

The chart below shows US long-term interest rates and the CAPE ratio of the S&P 500 since the 1880s:

To me, Shiller’s data shows how changes in interest rates alone can’t tell us much about the movement of stocks. In fact, relationships in finance are seldom clear-cut. “If A happens, then B will occur” is rarely seen.

Time that’s spent watching central banks’ decisions regarding interest rates will be better spent studying business fundamentals. The quality of a company’s business and the growth opportunities it has matter far more to its stock price over the long run than interest rates.

Sears is a case in point. In the 1980s, the US-based company was the dominant retailer in the country.

“No one has to tell you you’ve come to the right place. The look of merchandising authority is complete and unmistakable,” The New York Times wrote of Sears in 1983.

But Sears filed for bankruptcy in October 2018, leaving its shareholders with an empty bag. In his blog post mentioned earlier, Housel also wrote:

“Growing income inequality pushed consumers to either bargain or luxury goods, leaving Sears in the shrinking middle. Competition from Wal-Mart and Target – younger and hungrier – took off.

By the late 2000s Sears was a shell of its former self. “YES, WE ARE OPEN” a sign outside my local Sears read – a reminder to customers who had all but written it off.”

If you’re investing for the long run, there are far more important things to watch than interest rates.

5. Investors Will Want To Make Huge Changes To Their Portfolios

Ofer Azar is a behavioural economist.

He once studied more than 300 penalty kicks in professional football (or soccer) games.

The goalkeepers who jumped left made a save 14.2% of the time while those who jumped right had a 12.6% success rate. Those who stayed in the centre of the goal saved a penalty 33.3% of the time.

Interestingly, only 6% of the keepers whom Azar studied chose to stay put in the centre. Azar concluded that the keepers’ moves highlight the action bias in us, where we think doing something is better than doing nothing.

First is a paper published by finance professors Brad Barber and Terry Odean in 2000.

They analysed the trading records of more than 66,000 US households over a five-year period from 1991 to 1996. They found out that the most frequent traders generated the lowest returns – and the difference is stark. The average household earned 16.4% per year for the timeframe under study but the active traders only made 11.4% per year.

Second, finance professor Jeremy Siegel discovered something fascinating in the mid-2000s. In an interview with Wharton, Siegel said:

“If you bought the original S&P 500 stocks, and held them until today—simple buy and hold, reinvesting dividends—you outpaced the S&P 500 index itself, which adds about 20 new stocks every year and has added almost 1,000 new stocks since its inception in 1957.”

Doing nothing beats doing something.

The caveat here is that we must be adequately diversified, and we must not be holding a portfolio that is full of poor quality companies. Such a portfolio burns our wealth the longer we stay invested, because value is being actively destroyed.

6. The Vast Majority of Humans Will Want To Improve Their Lives and the World

There are 7.8 billion individuals in the world today, and the vast majority of us will wake up every morning wanting to improve the world and our own lot in life.

This is ultimately what fuels the global economy and financial markets. Miscreants and Mother Nature will wreak havoc from time to time.

But I have faith in the collective positivity of humanity. When things are in a mess, humanity can clean it up. This has been the story of mankind’s and civilisation’s long histories. And I won’t bet against it.

Mother Nature threw us a huge problem this year with COVID-19.

Even though vaccines against the virus have been successfully developed, it is still a major global health threat.

But we – mankind – managed to build a vaccine against COVID-19 in record time. Moderna, one of the frontrunners in the vaccine race, even managed to design its vaccine for COVID-19 in just two days.

This is a great example of the ingenuity of humanity at work.

To me, investing in stocks is the same as having the long-term view that we humans are always striving, collectively, to improve the world.

If you have any questions about these stocks and other stocks in general, why not head over to the SeedlyCommunity to discuss them with like-minded individuals?

Disclaimer: The information provided by Seedly serves as an educational piece and is not intended to be personalised investment advice. ​Readers should always do their own due diligence and consider their financial goals before investing in any stock. The Information does not constitute an offer or solicitation to buy or sell any investment product(s).