Confirmed: The New Google Pixel 4 Is Cheaper Than The iPhone 11 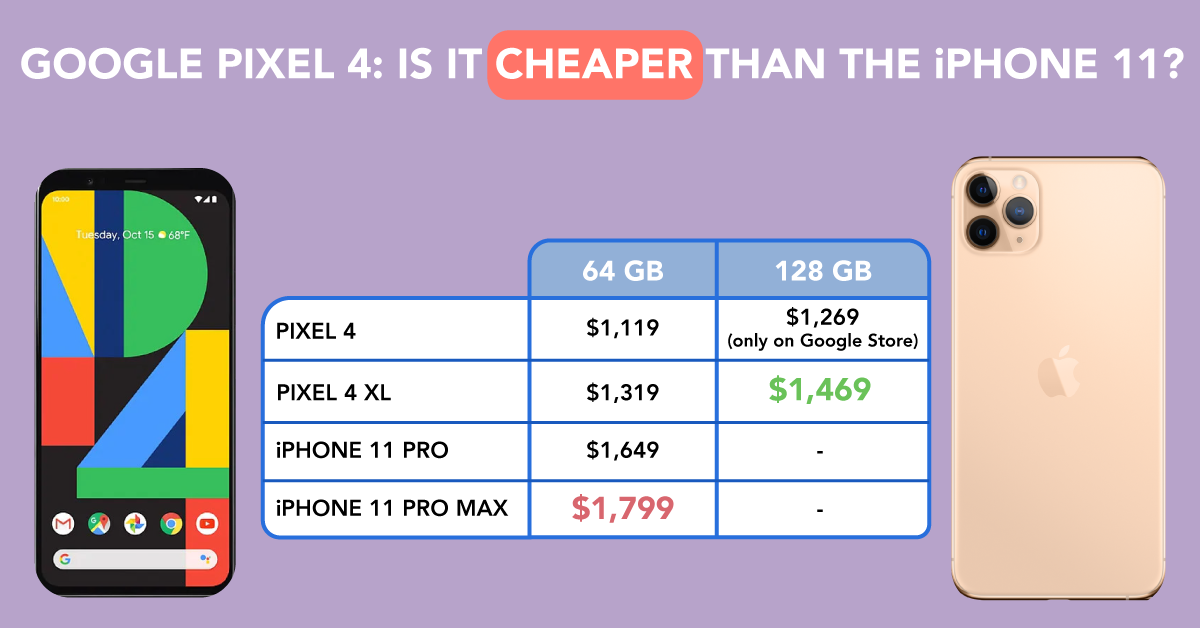 Confirmed: The New Google Pixel 4 Is Cheaper Than The iPhone 11

If you aren’t an Apple fan, then you probably didn’t care too much about it.

But if you use smartphones and are looking to get a new phone to replace your current one, then you would please to know that I did a little math and confirmed that even for a ridiculously overpriced device like the iPhone 11, a SIM-only plan + buy your device separately option is still (usually) the most economical option.

Now that the long queue for the iPhone 11 outside Apple Orchard Road is over, it’s Google’s turn to turn heads with the latest iteration of their Pixel smartphone: the Pixel 4 and Pixel 4 XL.

Being Seedly‘s resident bargain tech hunter, you know that I’ll be looking at the prices closely.

When Will The Google Pixel 4 Be Available In Singapore?

Google has already unveiled the Pixel 4 and Pixel 4 XL at this year’s Made by Google event.

The Pixel 4 and Pixel 4XL are available for pre-order on the Google Store, Challenger and Courts right now.

If you plan to get yours with a telco, only Starhub will carry the Pixel 4.

Here’s what’s under the hood of the Pixel 4 and Pixel 4 XL:

Apart from the very obvious fact that this Pixel is the first in the series to have dual back cameras, here’s what else to expect.

This new iteration of the Pixel will see the introduction of a new colour as teased by this billboard ad in Times Square:

And like all the other colours which Google released so far, this orange colourway is whimsically named ‘Oh So Orange’.

FYI: according to the Google Store (as well as Challenger and Courts) the ‘Oh So Orange’ is only available in 64GB only.

One of the potentially biggest bugbears for most Pixel users would be the fact that Google has removed the fingerprint scanner.

In its place is something Apple users would be familiar with: facial recognition.

Google’s not calling it Face ID or anything fancy. It’s just going with Face Unlock.

The biggest thing that most people are looking forward to in the new Pixel 4 is Motion Sense.

This is built into the bezel of the phone (see the Soli radar chip?) along with a lot of tech to enable Face Unlock.

More importantly, here’s what it looks like in action:

It’s basically a radar that deciphers your hand movements and gestures to allow you to do stuff like:

So… How Much Does The Google Pixel 4 Cost?

Here are the prices (from Google Store) as compared to the Pixel 3:

It’s worth noting that the Pixel 4 is actually cheaper than its predecessor.

Which is strange as it’s common practice for most brands to drop the prices on an earlier iteration of a line of smartphones whenever a newer one is announced.

Note: I’m making this comparison based on the fact that these are the respective companies’ flagship models. I am not going into whether the price difference is because of the difference between the A13 Bionic and Snapdragon 855, or the fact that the Pixel 4 doesn’t have a wide-angle lens.

Well, we now know that Starhub is the only telco that will carry the Pixel 4 and Pixel 4 XL.

I’ll update this space again when they release their prices.