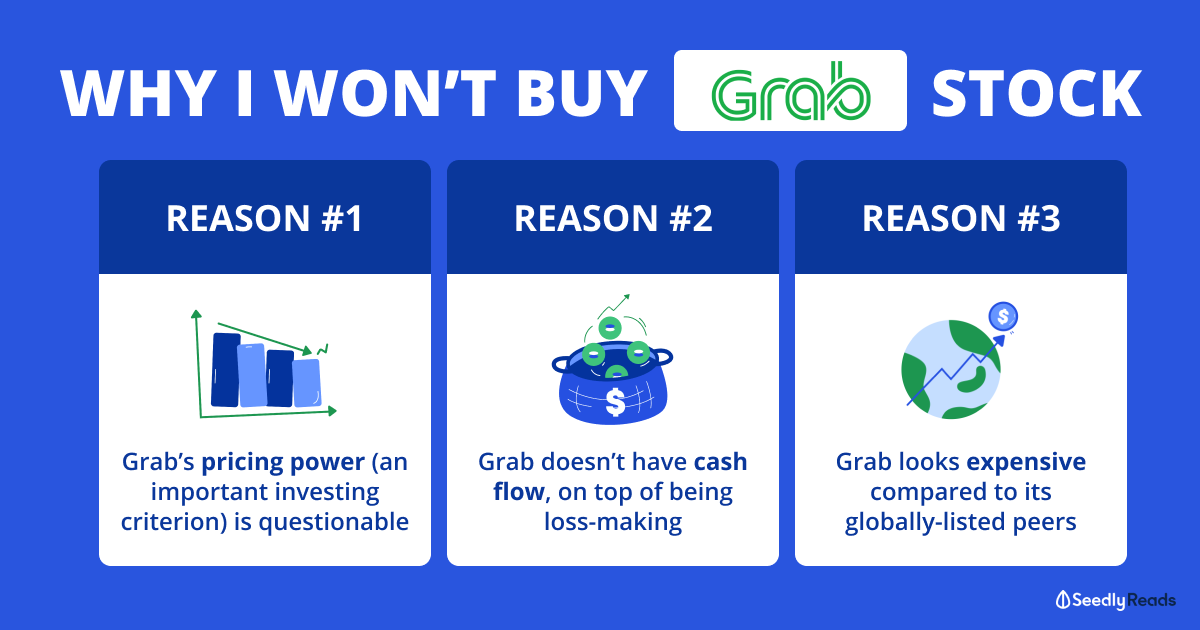 You would’ve probably heard by now that Grab will become a listed company through a merger with Altimeter Growth Corp (NASDAQ: AGC), a special purpose acquisition company (SPAC).

The merger is expected to be completed by July 2021. Once the deal goes through, Grab will trade under the ticker “GRAB” on the Nasdaq stock exchange.

There seems to be a long growth runway for Grab too, attracting many investors.

According to the company, Grab’s market opportunity in this part of the region is huge, with its total addressable market (TAM) set to grow to US$180 billion by 2025, up 28% annually from US$52 billion in 2020.

Despite the growth potential of Grab, I’ll skip investing in the company.

Here are some reasons why I won’t buy Grab shares:

World-renowned investor Warren Buffett once mentioned that he judges businesses on their ability to raise prices (emphases are mine):

It looks to me like Grab doesn’t have pricing power.

Definition: Adjusted net revenue is defined by Grab as gross billing minus base incentives given to its drivers and merchant partners.

Most of Grab’s revenue now comes from its deliveries (of which food delivery is part of) and mobility (which includes ride-hailing) businesses, so I’ll focus on those segments when evaluating the company.

In my opinion, there’s not much differentiation when it comes to Grab and its food delivery competitors such as Deliveroo, foodpanda, WhyQ and airasia food.

The same goes for Grab and its competitors in the ride-hailing space like Gojek, Ryde, and ComfortDelGro.

Consumers tend to gravitate towards a provider that gives them the best value, and most often it’s the one with the lowest cost. In other words, users can be sensitive to price increases, as a recent episode has shown.

On 25 May 2021, Grab announced that it’s increasing its base fares by $1 from June to “make it sustainable for our driver-partners to continue to be on the road”. This marks Grab’s first adjustment to its fare structure since 2017.

But that move drew plenty of flak from the public, if Grab’s Facebook page is anything to go by.

Grab’s fare hike announcement post drew 424 reactions (as of the time of writing), with the majority of them (331 to be exact) being “angry”.

Drivers were not happy as well.

According to a TODAYonline report published the next day, private-hire car drivers said it would be better for Grab to reduce the 20% commission it takes from their earnings.

The same report mentioned that Yeo Wan Ling, an advisor to the National Private Hire Vehicles Association and a Member of Parliament, called on Grab to relook its commission formula.

With the fare increase, Singaporeans can easily turn to Grab’s competitors to move them from point A to B. With a lower demand for its ride-hailing services, its drivers would also look elsewhere for jobs.

If Grab cannot successfully raise its fares and is pressured to reduce its commissions as well, it will affect its take rate projections, which ultimately will hinder its profitability.

Definition: Take rate is the amount of adjusted net revenue Grab makes out of the value of products and services sold on its platform (or gross merchandise value, GMV).

This will bring Grab’s overall projected take rate to 13% to 14% (highlighted in red box below).

I believe the overall take rate projection is aggressive given the sensitivity involved around fare increases and commissions for its key businesses.

We also have to bear in mind that Grab’s food-delivery business got a boost last year, with many people hunkering down in their homes amid the pandemic. But questions remain if it can maintain the 15% take rate on a sustained basis without stepping on the toes of its food delivery partners.

Show Me the Cash Flow

If I were to invest in a loss-making company, I would like it to produce cash flow at the very least.

Jeff Bezos, in his letter to Amazon.com (NASDAQ: AMZN) shareholders in 2001, explained why cash flows are important:

“Why focus on cash flows? Because a share of stock is a share of a company’s future cash flows, and, as a result, cash flows more than any other single variable seem to do the best job of explaining a company’s stock price over the long term.”

Without cash flow, a company has to borrow money from banks and/or undertake equity fundraising to sustain its daily operations over the long run.

As for Grab, it hasn’t been producing cash flows over the past few years.

Grab didn’t provide its cash flow projections in its investor presentation, so we cannot know when it expects to be cash flow positive.

Amazon became cash flow positive in 2002 and profitable the next year. Its cash flow grew at an annualised pace of 39% from 2002 to 2020. Of course, we all know how the e-commerce giant performed stock price-wise during that time frame.

I’ll be looking out for Grab’s cash flow and whether it can become positive in the coming years.

Not Hailing the Grab Stock

Valuing companies can take many forms, including doing sophisticated projections using spreadsheets. However, I like to keep things simple when it comes to valuation.

Grab’s valuation certainly looks expensive as compared to some of its listed peers.

It’s not exactly an apple-to-apple comparison, but the quick valuation exercise does give me a sense of where Grab stands in terms of its valuation.

With a business that doesn’t seem to have the ability to raise prices and an expensive valuation, Grab seems like a risky investment.

Therefore, I’d avoid investing in Grab and rather be on the sidelines for now.

Would You Invest in Grab Shares?

Does Grab look like a viable investment to you? Let us know your thoughts in our Seedly community!