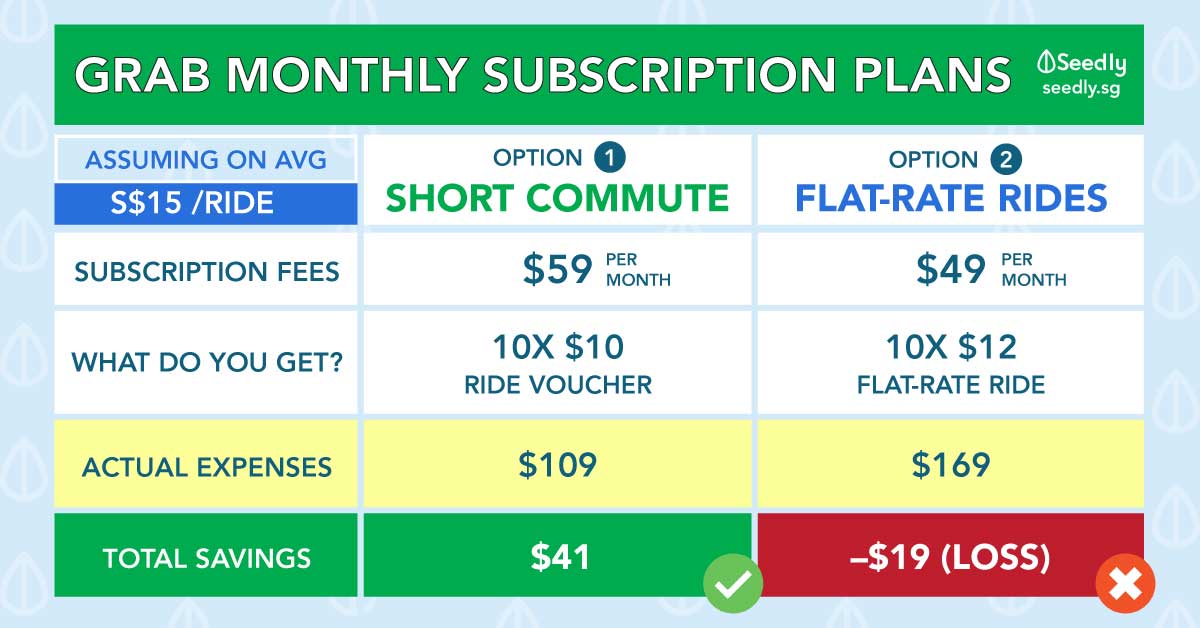 GrabClub consists of 4 elements which Grab tries to cater to everyone in Singapore possible (well except those that don’t cab).

As promised in the last quarter of 2018, Grab released additional passes such as short commute pass and flat-fare pass.

The 4 types of GrabClub passes are:

TL;DR: An Overview of how much GrabClub Passes cost Each Month

Read more on the other passes: GrabClub, Grab’s Subscription Service in Singapore, is it worth it?

In this article, we will be going through:

Disclaimer: While we are affiliated with ShopBack… we select and review products and services independently in line with our Seedly Code of Ethics.

Which Pass Should I Opt For?

Main takeaways before committing to each pass, you should opt for:

The possibilities are endless, use the analysis provided below to check if GrabClub Passes are worth the money for you!

I don’t Grab often, I can’t even get a ride using Grab as a Gold member but I would say that by setting aside S$59 a month would give me $100 Grab vouchers is quite enticing.

I don’t think it is transferrable though unless you book rides for your friends!

Things to Note on GrabClub Passes:

Short commute passes allow you to save on short-distance trips preferably less than S$10 per trip which you can nullify with your S$10 ride voucher.

Breaking Down An Example: Your average Grab Ride costs S$10

Assuming your average cost each ride is S$10 on Grab, which is covered by your S$10 voucher.

Here are the Actual Expenses and your Total Savings with Short Commute pass:

From the above analysis, if your Grab fare does not amount to S$6, you will not breakeven your cost.

“Kuek Jinhua – Although the long distance one is sold out, the short commute one is still useful since it gives $10 off, which results in ~20% savings for those with higher fares…”

Here are the Actual Expenses and your Total Savings with the Flat-Fare Rides pass:

The more expensive your Grab rides usually are, the more you save by using the flat-fare passes.

Breaking Down An Example: Your average Grab Ride costs S$15

Assuming your average cost each ride is S$15 on Grab, but you only had to pay S$12 for each of your rides.

In comparison with the Actual Expenses if holding onto the Short Commute Pass would be S$109 or S$209 respectively.

From the above analysis, you will not breakeven your cost even if your average Grab ride costs about S$15.

If you are keen to look at the full breakeven analysis, do refer to it here.

Here’s what the Community has to say

For more details, you can refer to their FAQ here.

Other Alternatives to GrabClub Passes

Too many passes, can’t seem to make up your mind? It’s okay, that’s all of us.

Not sure where Grab is trying to drive the market towards, with so many choices, how could a consumer decide? Just go with a one-off Grab voucher then.

If neither of these passes has convinced you to put more money aside in Grab, or you do not wish to have your money locked up, you can look at Lazada or Shopee for Grab vouchers at 13% off its original price!

Don’t forget to use ShopBack to get cashback!

Where Do I Get GrabClub?