HDB BTO November 2021 Launch: Which One Should You Apply For? 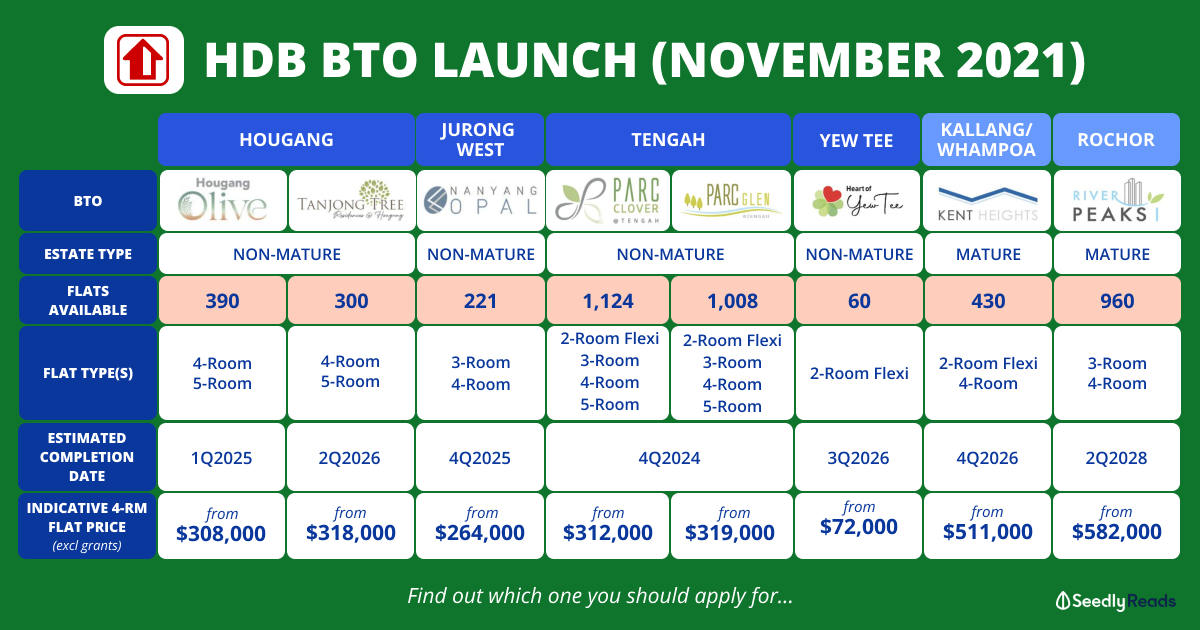 HDB BTO November 2021 Launch: Which One Should You Apply For?

Are you planning to get your first flat?

I’ve talked to so many friends and securing an HDB BTO flat seems almost impossible today.

Just like camping for the next Black Friday sale, we camp for BTO launches now as well.

If you’ve missed that one or nothing caught your eye back then, fret not!

For the upcoming November HDB BTO launch, there will 8 projects available to choose from.

And this launch will see an estimated total of 4,501 new flats.

The mature estates include Kallang/Whampoa and Rochor.

The non-mature estates include areas like Hougang, Jurong West, Tengah and Yew Tee.

Applications for the flats are now open and will close next Tuesday (Nov 23) at 11:59pm on the HDB flat portal.

Should you try for a unit during the HDB BTO November 2021 launch?

There will be two HDB BTO projects offered in Hougang.

Hougang Olive will be located beside Hougang Avenue 3, featuring 390 units of 4-Room and 5-Room flats.

Tanjong Tree Residences will be located beside Hougang Avenue 1, featuring 300 units of 4-Room and 5-Room flats.

Both of them are located near Hougang Citrine, one of the projects in the recent August HDB BTO launch.

Which means that they are a distance away from Bartley MRT station.

Nevertheless, Hougang is a location filled with amenities that are easily accessible by residents, with healthcare institutions, schools and neighbour parks in the area.

There will be a total of 221 units of 3-Room and 4-Room flats available for the Jurong West project.

While this project is slightly further in the West of Singapore, we are hopeful that the upcoming Jurong Region Line will improve the accessibility of this area.

It’ll be located right an NTUC Health Nursing Home (Jurong West) which might be convenient for those who are looking for such amenities.

There will also be a temple nearby, so do note the possibility of congestion during major festivities.

Jurong West Jewel is also located a distance away from Pioneer MRT Station, similar to this upcoming BTO project.

Given that the Jurong West BTO launch is slightly further from Pioneer MRT station as compared to this, we are expecting the price to be slightly lower.

Which is why the price of a 4-Room HDB BTO flat starts from $264,000, which is pretty affordable in today’s terms.

There will be two upcoming HDB BTO launches at the new Tengah town featuring over 2,120 units.

This will be the largest offering for the November HDB BTO launch.

However, in terms of location, these two upcoming BTO projects are closer to Parc Residences, which was launched a year ago in August 2020.

West Mall can be a distance away, but with the up and coming neighbourhood centre in Tengah, residents do not have to worry about travelling far and wide for groceries and daily necessities.

There will be about 68 units released for the Choa Chu Kang project.

For this project, there’ll only be 2-Room Flexi flats to choose from. 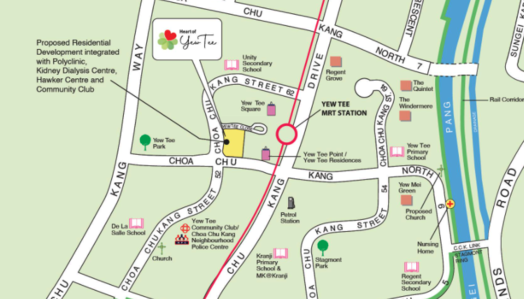 Located at Hardcourt @ Yew Tee Close, it will be part of the new integrated development, consisting of a community club facility, a polyclinic, a kidney dialysis centre, and a hawker centre.

How Much Will Heart of Yew Tee @ Yew Tee HDB BTO Flats Cost?

This project will be located just beside Yew Tee MRT Station, making it a very convenient location.

The last BTO launch in the vicinity was Keat Hong Verge, which is located right beside Keat Hong LRT station.

Even though Choa Chu Kang is a non-mature estate, that project saw a subscription rate of 3.4 for its 2-Room Flexi flats.

Given the convenience of this upcoming HDB BTO project, it’s surprising that a 2-room Flexi flat (Type 1) starts from just $72,000.

Besides being within the new integrated development, residents will also be able to enjoy the newly refurbished Limbang Shopping Centre by end-2022.

Other nearest shopping centres would include:

For those who prefer the convenience and development of a mature estate, there will be just one project available in the upcoming HDB BTO launch.

And it will be located at Kallang/Whampoa.

HDB BTO launches have been quite frequent at the Kallang/Whampoa area.

We recently saw two launches in the vicinity, namely the Towner Residences project launched recently in August, and the McNair Heights project earlier in February this year.

This time round, there will be 430 units of 2-Room Flexi and 4-Room flats available.

Pretty sure it’s gonna be a competitive one.

The McNair Heights project saw an application rate of 7.4 previously.

There are also plenty of dining options in the area, along with medical facilities like Kallang Polyclinic, Kwong Wai Shiu Hospital and KK Women’s and Children’s Hospital.

However, as it is located right next to the Central Expressway (CTE), the noise level might be an area of concern to some.

Nevertheless, the location of this project and its surrounding amenities makes it an attractive one.

With a further distance from MRT stations this time round, 4-Room HDB BTO flat costs about $511,000.

The Rochor BTO is the latest addition to the list of HDB BTO November projects, after the announcement of the newly established Prime Location Public Housing (PLH) model.

This model will ensure that new flats located at prime locations such as the city centre and the Great Southern Waterfront will remain affordable and accessible to everyone.

This project will be the first to be launched under this model, and will see 960 units of 3-room and 4-room flats, and also 40 units of 2-room rental flats.

How Much Will River Peaks I & II @ Rochor HDB BTO Flats Cost?

These flats are well-located and surrounded by various amenities, including MRT stations, food centres and schools.

If you’re familiar with that area, you would know that it is one of the hippiest districts in town, with cafes and popular food spots sprinkled across the neighbourhood.

Its location makes it a very attractive one, and being under the PLH model guarantees a higher price tag.

Based on past transaction data, we can see that a 3-Room HDB flat cost about $450,000 at Kelantan Road.