Is Your HDB Flat Potentially Worth $0?
907
shares 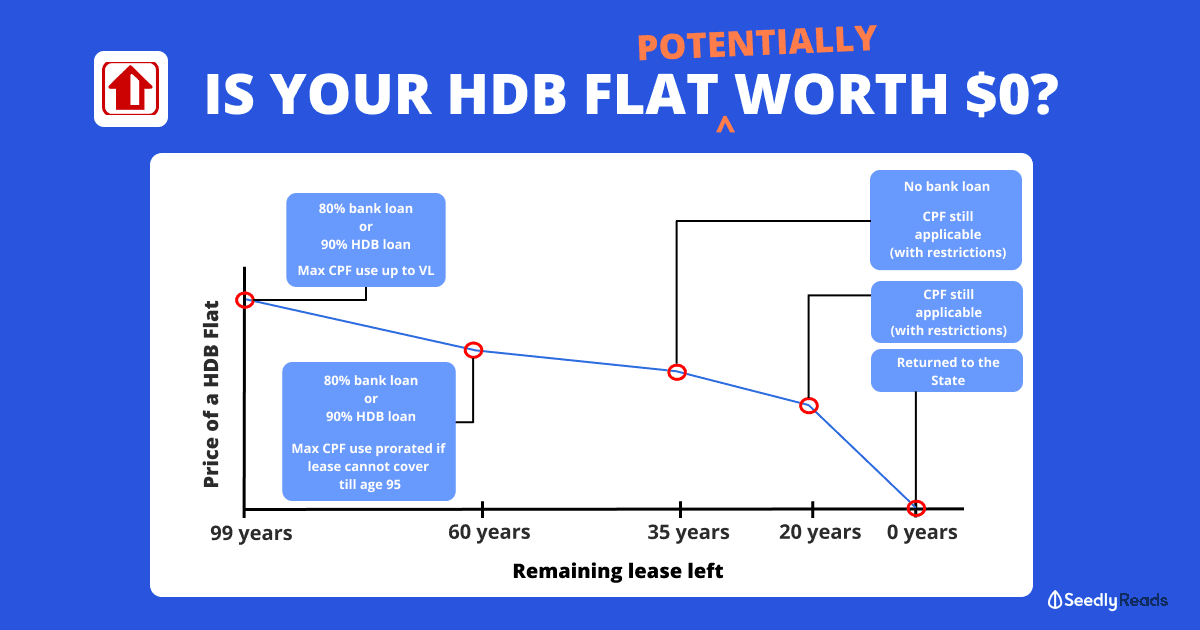 Over the weekend, I had a couple of friends over for tea and the conversation somehow turned into an argument over whether an HDB flat can be considered an investment.

When it reached the point where it seemed like it was going to become this:

They asked me for my opinion.

One of my friends asked, “Simi yes and no? Don’t act like you some pro debater leh...”

After I took a long sip of my tea, I said quietly, “Lease decay.”

Seated at the other end of the sofa, another one of my friends dropped his cookie (in what I can only presume is surprise and disbelief).

Is An HDB Flat An Investment?

The concept of an HDB flat as an investment is simple and there are two ways to look at it.

First, rental yield. This is where you choose to rent out say… one bedroom in your 4-room HDB flat and collect rent for it.

Of course, this is only after you’ve met your 5-year Minimum Occupation Period (MOP) and the other conditions as stipulated by HDB.

Secondly, capital appreciation. Where you purchase your HDB flat for a certain price and sell it later for a much higher price.

With examples like the Pinnacle @ Duxton 5-room HDB flat selling for $1.12 million back in 2016 and the most recent City View @ Boon Keng 5-room HDB flat which sold for a record $1.2 million, this is probably the narrative that most of us are familiar with.

And even though these are outliers, many still believe in the idea of capital appreciation which PM Lee Hsien Loong shared during his National Day Rally Speech in 2018, where he highlighted how a resident who bought his Ang Mo Kio flat 40 years ago at $25,000 can potentially sell it for $400,000, and in “a good location, probably more”.

However, the reality is that young couples buying a flat today probably will not see such a huge appreciation because “our economy is maturing and it cannot grow as fast anymore”.

Unfortunately for most Singaporeans, we’ve also forgotten that we will only own our HDB flat for 99 years.

Which means that at some point in time, our property will depreciate in value. Or as some property experts call it, lease decay.

An HDB Flat Is Only A 99 Years Leasehold Property

Now that we’re all reminded that an HDB flat has a lease of 99 years. What does it mean for us when the lease runs down to 0?

Well, the answer was given by Mr Khaw Boon Wan – then Minister for National Development – during the 12th Parliamentary Debate in 2014.

Simply put, your HDB flat will depreciate to $0 at the end of the 99-year lease.

HDB will surrender the land back to the State and it will be recycled to build newer HDB flats for future Singaporeans.

For those who are crying foul, it’s stated clearly on the HDB website, the contracts you sign when buying or taking over an HDB flat, as well as the price guides of all BTO/HDB launches:

For those who’re going, “But what if I sell my flat before the lease runs out?”

But consider this. Unless your HDB flat:

There’s a chance that the value of your property might not appreciate enough for you to see the kind of returns that you’re expecting from this ‘investment’ of your capital.

Also, unless you actually sell your HDB flat in order to reap the kind of capital appreciation that you want. Otherwise, any appreciation of your property is merely a paper gain.

And the longer you hold your HDB flat, there’s also a chance that it’ll reach the point where potential sellers might not want to consider your property anymore because of the remaining lease.

Especially if your HDB flat lease is 60 years or less.

For those going, “Walao. First, you tell me my property is potentially worth $0. Now you say my house when less than 60 years lease left got daiji (Hokkien: problem)?!”

Yeah… Sorry to be the bearer of bad news.

When your property has less than 60 years lease left, it gets harder to sell because CPF usage is restricted and bank loans are tightened.

Considering that the majority of Singaporeans use their CPF to finance their homes, this is A SERIOUS PROBLEM.

Long story short, unless your property is the next Bidadari and practically sells itself, you’re going to have to find a buyer who is willing to jump through quite a few hoops to buy your flat.

Remember that 5-room Boon Keng HDB flat which sold for $1.2 million which I mentioned earlier?

That could be an outlier because the prices of resale flats have been falling steadily in recent years.

This is all thanks to cooling measures introduced since July 2018 like higher Additional Buyer Stamp Duty rates and tighter loan-to-value (LTV) limits on residential property purchases, amongst many other things.

However, resale prices for HDB flats have slightly picked up since 3Q 2019. 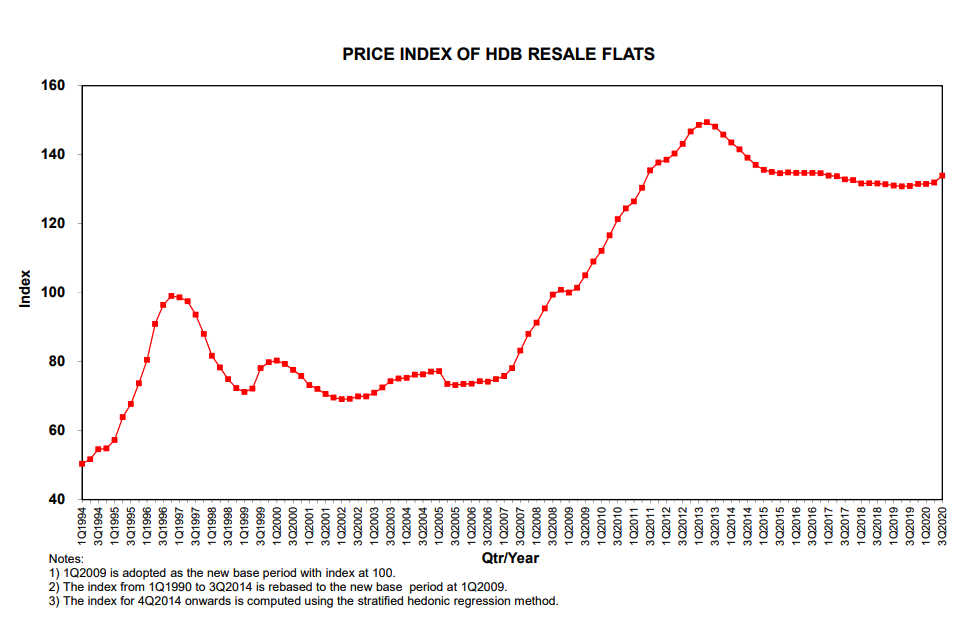 Cash Over Valuation And Resale Levy

The Cash Over Valuation (COV) would be the difference of $50,000 which the buyer has to pay in cash. And that is the premium which you stand to pocket from the sale of your flat.

As of March 2014, COVs were banished from the negotiation process because COV prices were reaching ridiculous highs.

Buyers and sellers must now agree on a price before seeking official valuation. The difference between the offered price and the actual valuation then becomes the COV.

So let’s say you managed to sell your flat.

You’re probably going to need to look for another place to call home.

If you’re going with a cheaper HDB resale flat, then you’re safe – sort of – because you’d only have to contend with the COV and the whims of the resale market.

Meaning if resale prices are high, then you siao liao.

But many of us might also be thinking, “Hmmm… Why not apply for another BTO? That way it’s another 99-year lease that even my children can potentially benefit from! And that will definitely be an investment since the price of a flat where the BTO is currently located is definitely going to be way higher when they eventually choose to buy one.”

The problem with going for a cheaper option like a subsidised flat, another BTO for example, then you’ll have to contend with a little something called the Resale Levy which looks like this:

Ultimately, this means that you’re probably getting less money than you wanted from the sale of your flat.

What About The Selective En Bloc Redevelopment Scheme (SERS)?

More commonly known as “En Bloc”, some of you might be thinking, “Aiya… The government will en bloc our HDB before the lease runs out what.”

But like what PM Lee shared during the NDP Rally 2018, “HDB estimates that only around 5% of flats are suitable for SERS“.

Statistically, it means that there’s an exceedingly high chance that your flat will not be picked for en bloc.

For BTO owners, this shouldn’t affect you too much unless you somehow manage to outlive the 99-year lease. For context, assuming you buy your BTO at age 30, you’d have to live till 129 years old for this to be a REAL problem…

You might want to check how long your lease is and start making plans.