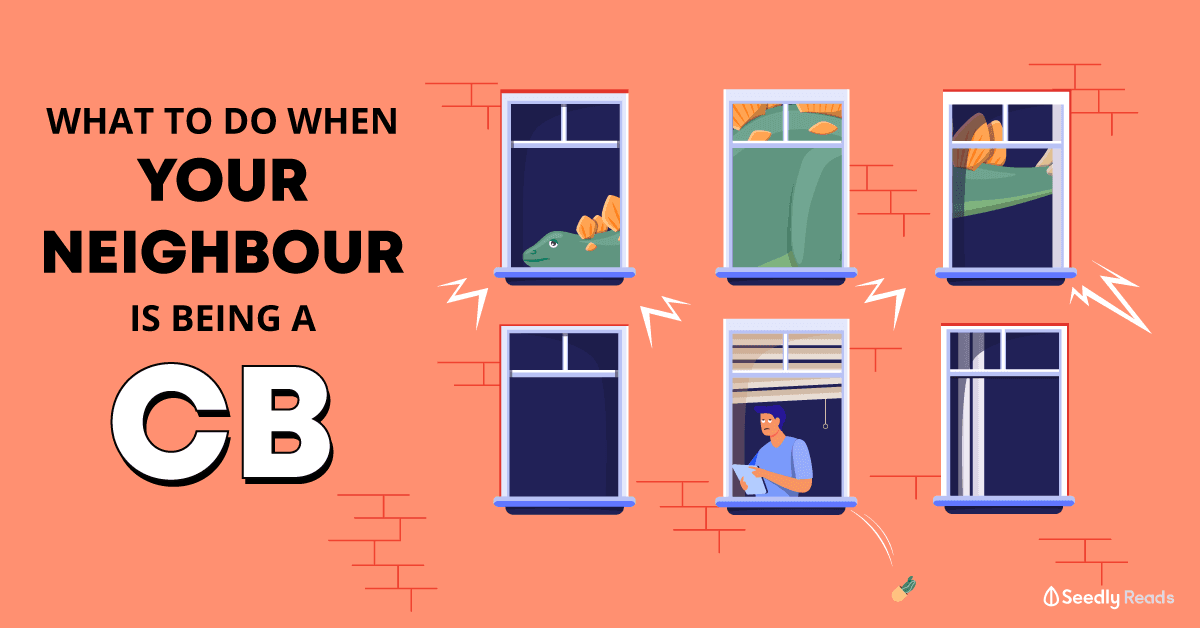 I’ve always thought that my HDB estate is pretty quiet.

Since I leave for work really early in the mornings, I have absolutely no idea if the neighbourhood comes alive with the sound of family fights and stay-at-home moms shouting at screaming kids.

Or if Asian Koel birds “sing” non-stop throughout the day.

Thanks to COVID-19 and the Circuit Breaker Period, which has been extended till 1 June 2020, I’m at home all the time now.

While I haven’t heard any fights or screams — I do hear those bloody birds though — I’m beginning to suspect that a herd of elephants live in the apartment directly above mine.

Oh, and by the way, the family is REALLY committed to learning how to stepdance or something.

Because every day at 10am, 2pm, 5pm, and 7pm, it sounds like the entire cast of Riverdance is in rehearsal. I’ve shared my earlier conjecture that the family living upstairs is a herd of elephants.

But I’d like to think that I’m a rational man and that there has GOT to be a more plausible explanation.

Since the kids are at home right now and parents need to find ways to entertain while educating them.

What if the parents were a little too overzealous with their science experiments, and somehow managed to clone their own dinosaur?

I mean, they would have to find ways to keep the Tyrannosaurus entertained or risk getting eaten right?

Alright, so dinosaurs are a bit far-fetched.

We’ve talked about turning your hobbies into a side hustle before.

So maybe… they’ve got so much rice lying around after the panic buying that they’re trying out mochi making?

Or perhaps they’ve gone old school and are using the traditional method of grape-stomping to produce their own homemade wine?

Either way, that WOULD explain the periodic pounding and stomping.

Or they could just be trying to stay active with online exercise classes and virtual workouts.

I’d imagine that a HIIT session with plenty of tuck jumps and burpees might be the culprit.

And since it’s recommended that going outside to exercise should be a solo affair, maybe they’re trying to be extra safe by exercising indoors as much as possible.

Well… I did a little research into managing noisy neighbours and here are a couple of approaches recommended by HDB.

(Who am I kidding, I’ve never lived in one.)

Instead of calling each other names or calling the Police.

You can try building good relations and talking to each other amicably about the problem.

Maybe the young ones really love running around while playing hide and seek?

(And unfortunately, get a little rowdy and stomp a bit when they’re having fun.)

Basically, find an opportunity to talk to each other and FOCUS on resolving the conflict at hand.

If you can’t talk it out with your neighbours.

You can seek help from a neutral third party like your grassroots leaders or the Community Mediation Centre (CMC).

Alternatively, you could seek legal recourse.

But this is only for the worst-case scenario where your neighbours are completely unreasonable and all attempts at mediation have failed.

In fact, in January 2020, the Community Disputes Resolution Tribunal issued Singapore’s first-ever Exclusion Order, where a Bukit Panjang family was banned from their home for a month.

Apparently, the family was being a nuisance to their neighbour and ignored all earlier attempts at mediation (which involved the Police, the Town Council, HDB, and even their MP).

Oh, besides the exclusion order, the court can also impose a maximum $5,000 fine on each member of the household or three-month imprisonment. Or in some cases, both.

P.S. filing for the Exclusion Order is not cheap as there is a myriad of court fees to contend with.

That being said, a lady in Ang Mo Kio received a cake from her conscientious neighbours upstairs for ‘bearing with their kids’ during this Circuit Breaker Period.

I guess where I’m going with this, is this: the Circuit Breaker Period is a little trying on everyone since we’re all holed up at home.

But while we discover new hobbies, indulge in our favourite distractions or try to stay active by exercising at home, we can all afford to be a little considerate of our neighbours.

Especially if what we’re doing sounds like a pack of dinosaurs are collectively doing The Great(er) Singapore Workout.

You confirm know lor, just try to minimise the noise as much as possible or maybe work out a schedule with your neighbours so they’re prepared for it.

I’m sure they’ll appreciate the heads-up and consideration.

Before penning this, I’ve thought about going upstairs to ascertain if my neighbours are, indeed, elephants.

But I’ve learnt to take a deep breath.

And have made my peace that at least the noise they make isn’t sustained for a prolonged period of time.

I’m also especially grateful that they aren’t tap dancing in the quiet hours of 10:30pm to 7am either.

I just need to remind myself that they’re just being CBs.

Note: to my massive international fanbase of two readers in Swaziland, the Singapore government decided to call the imposing of stricter movement controls and measures a Circuit Breaker. The idea here is that if we stayed at home as much as possible and only stepped out for the essentials, we’re (figuratively) ‘Circuit Breakers’ that will interrupt the spread of COVID-19. This helps protect our community at large and prevents our healthcare systems from being overloaded.