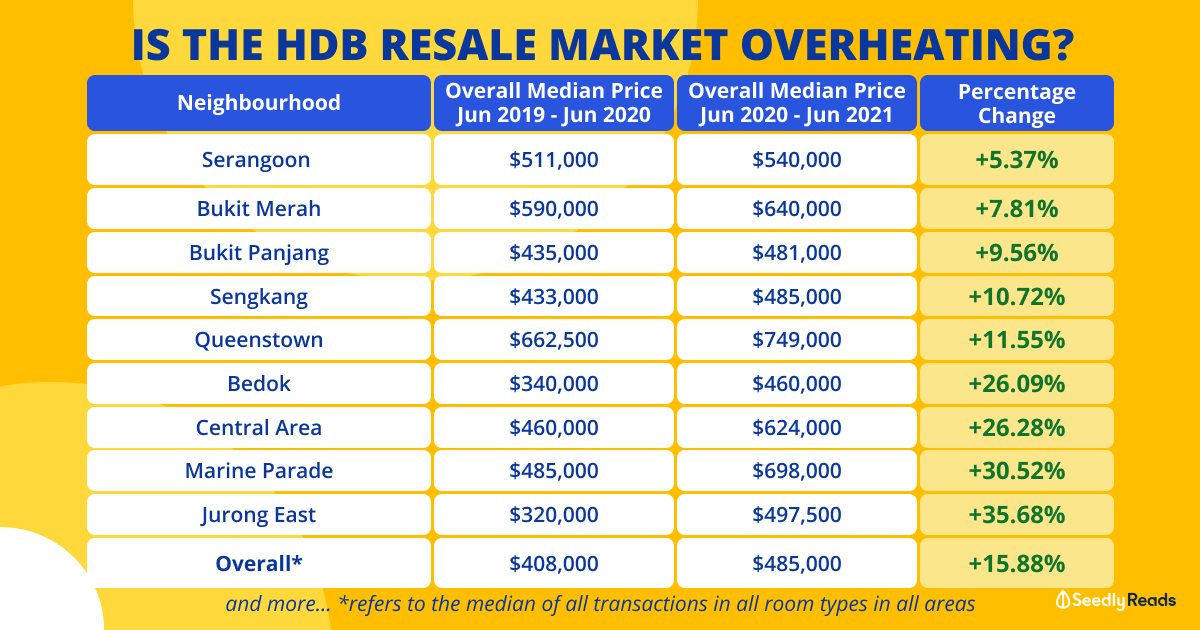 HDB Resale Flat Prices Have Risen Continuously For The Past 12 Months!

Despite the COVID-19 pandemic and a recession, HDB resale flat prices have been going up and up.

In fact, HDB resale flat prices have been rising continuously for the last 12 months before June 2021.

But by how much exactly?

Let’s do a deep dive so we can understand better.

*Overall price refers to the median resale price of all 3-, 4-, 5-, Exec- room type transactions in a neighbourhood.

**Overall represents the median of all HDB resale transactions in all room types and in all areas.

To track resale flat prices, the first thing we can look at is the HDB Resale Price Index (RPI).

According to HDB, this is how the RPI works:

This index can be used to compare the overall price movements of HDB resale flats.

It is calculated using resale transactions registered across towns, flat types, and models.

For example, if the index increases from 100 to 108 in one year, that means that on the whole, HDB resale flat prices increased by about 8% over that year.

This means that housing prices have increased about 42.2 per cent since Q1 2009.

So do save this article as we will be updating it once new information is released.

According to the SRX Property Price Index (SPI) for HDB Resale: 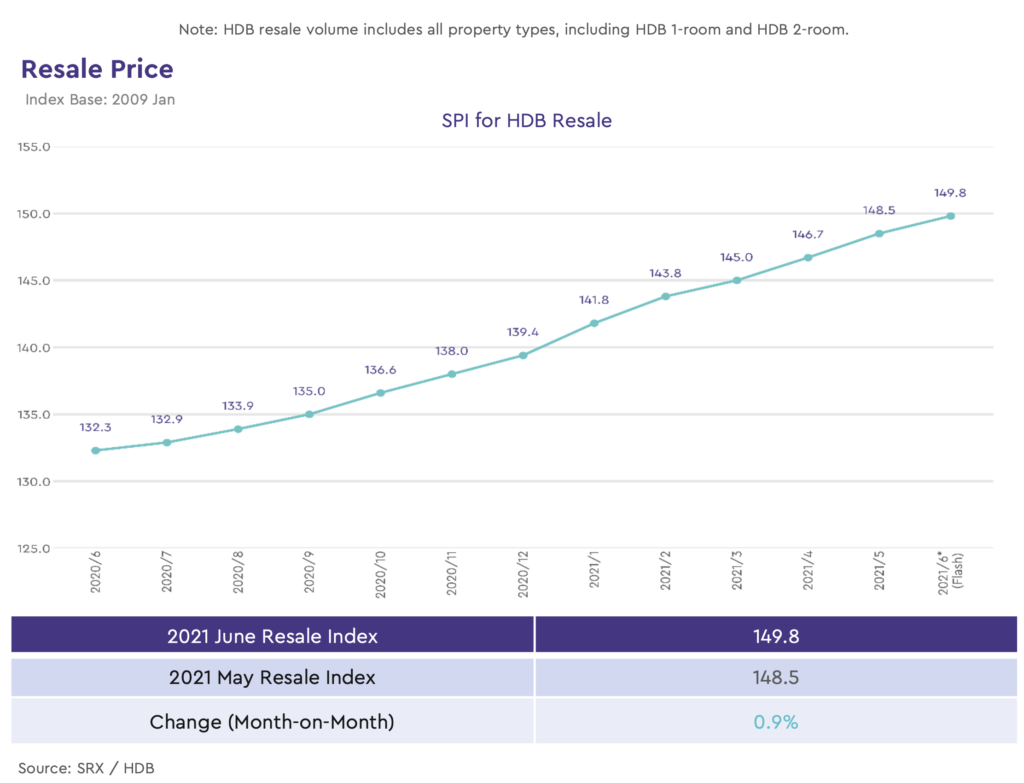 To break it down a bit more here’s how much the price increased according to the size of the flats within the same time period.:

Now let’s break it down by neighbourhood. 
*Figures derived from fewer than 10 transactions.

From last year till now, the overall median price of HDB resale flats has increased by about 15.88%.

Surprisingly, a mature estate like Serangoon has seen the smallest increase of only about 5.37%

Whereas another mature estate Jurong East is the biggest gainer as prices went up by about 35.68%.

This is a pretty substantial amount as you will be looking at paying about $177,000 more for a resale flat in Jurong East.

According to SRX, a total of 106 HDB resale flats were sold for more than $1 million in the first half of 2021. In other words, the number of million-dollar flats sold this year has hit an all-time high and we are only halfway through the year.

Granted the number of million-dollar flats sold made up 0.8% of the total resale volume of the 2,311 HDB resale transactions in June 2021.

But the number is growing.

The common denominator between these million-dollar HDB flats is that all 106 of them are located in mature estates like Bishan, Bukit Merah, the Central Area, Kallang/Whampoa and Queenstown.

There’s no telling if more million-dollar flats will be sold in the second half of 2021.

But the data indicates that there is an increasing trend of HDB resale flats being sold for $1 million and above.

Another indicator of the HDB resale market overheating is the increase in the number of people paying Cash Over Valuation (COV). 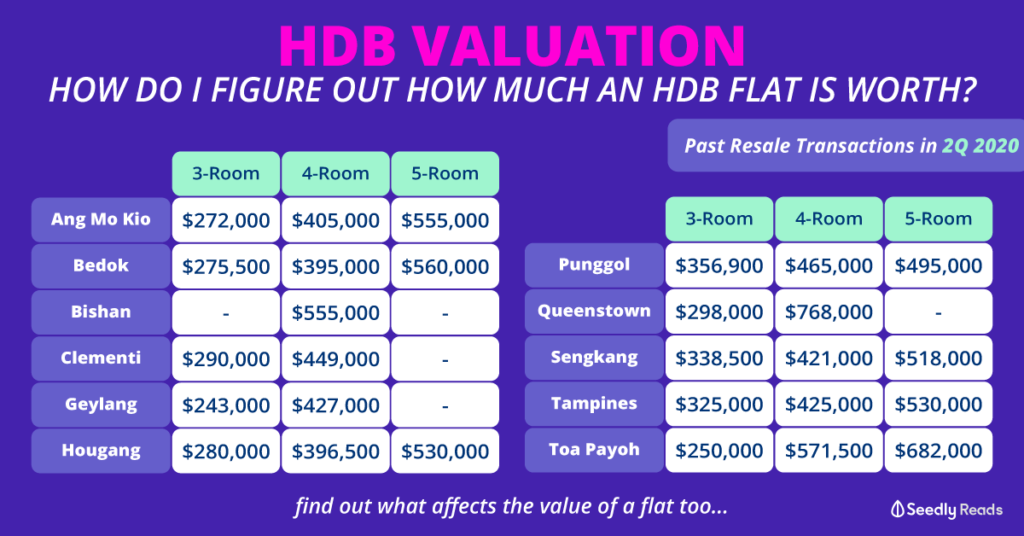 Here is what the COV is about as explained by my colleague Kenneth:

Prior to 2014, a seller and buyer would decide on the selling price of the flat AFTER HDB’s valuation of the flat.

Since the valuation is pretty much fixed by HDB.

The seller and the buyer would then decide how much cash-over-valuation (COV) will be paid on top of this valuation.

Usually, this is based on past COV prices which were posted online by HDB.

Which technically could be anything between $1 to infinity and beyond.

Buyers who had cash flowing out the wazoo would have no problems paying whatever the seller is asking for especially if they die die also want that flat.

See how this quickly became a problem?

After HDB decided to stop publishing the COV prices, sellers could not use the COV as a way to jack up the selling price.

So now… the only way for buyers and sellers to agree on a price is by basing it on the prices of past resale transactions.

Once the selling price is agreed, the buyer will then request for HDB to carry out a valuation to figure out how much COV has to be paid.

And the HDB appointed valuer values the flat at $600,000 after physically inspecting the flat…

In other words, the COV is the difference between the transacted price of the flat and its official valuation by the HDB. This difference must be completely paid for in cash.

In a written reply to parliament last Monday (5 Jul 2021), the Ministry of National Development (MND) stated that:

This reflects the current broad-based demand for housing, including in the private housing market, supported by the low interest rate environment.

Notwithstanding this, the majority of buyers did not have to pay any COV, and the median COV each year has remained at $0.

This is a 65% increase in the number of people paying COV compared to last year.

In general, more people will pay COV when the market is overheated and buyers are fighting over limited supply in the HDB resale market.

Clearly, all these indicators are saying that the HDB resale flat market is overheated.

Is This a Problem?

On the surface, rising HDB flat prices are great for the Singaporeans who managed to buy heavily subsidised HDB flats with generous HDB grants early on.

But clearly, the rising HDB resale flat prices are not great for first-time homeowners who cannot buy an HDB BTO flat for one reason or another.

If HDB resale prices keep increasing, this puts a spanner in the works of HDB’s mission to ‘provide affordable, quality housing and a great living environment where communities thrive.’

That is the million-dollar question.

There’s no telling whether HDB resale prices will continue going up in the next few years.

Or whether the Government will step in to implement some cooling measures when the resale market gets overheated.

After all the Monetary Authority of Singapore (MAS) announced and implemented new cooling measure measures on 12 January 2013 before the RPI hit an all-time high of 149.4 in Q2 2013.

These measures MAS implemented include:

I do not envy the policymakers who will have to maintain a delicate balance between:

It also appears the Government is keeping a close eye on rising resale flat prices:

In March 2021, Minister for National Development Desmond Lee spoke at the Committee of Supply debate of the need to ensure that public housing remains ‘affordable and inclusive over time.’

This was in response to his concern that future developments like the Greater Southern Waterfront an estate located in a prime location will become exclusive to the rich and wealthy stating that:

If it’s going to be sold and transacted at high resale prices, then there is a risk that only well-off Singaporeans can buy (flats in) those estates. And then of course, the character of the estates will change and it may be priced beyond the reach of ordinary Singaporeans.

He added that ‘In short, as a social policy, we have to act against the instinct of the market.’

At the speech he also talked about suggestions like imposing a longer minimum occupation period and limiting the pool of HDB resale flat buyers.