Are These Healthcare Stocks In "Good Health"? 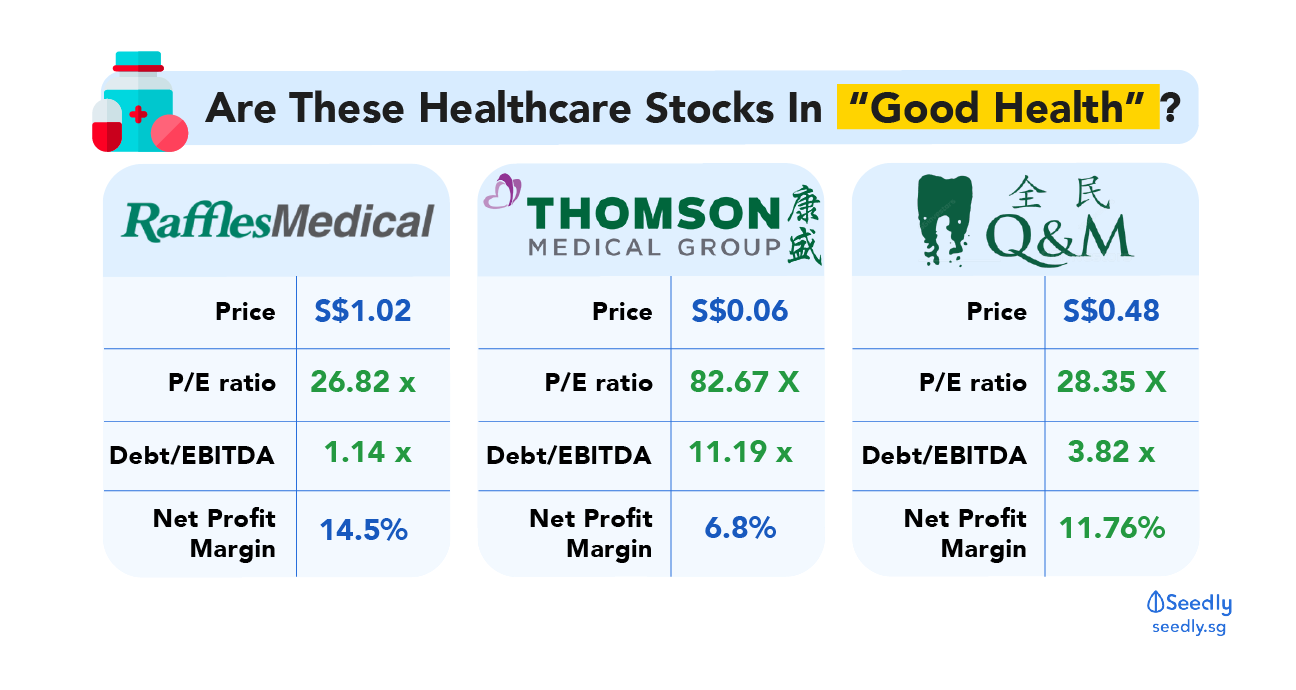 Are These Healthcare Stocks In "Good Health"?

A few weeks ago, my sister got admitted to medical school at an Australian university.

I’m really happy for her as it is notoriously difficult to study medicine and dentistry in Singapore – due to the intense demand here to major in either field. It’s a good measure of how essential healthcare is to the country and her future is pretty much set because she’ll be in a highly sought after industry that pays well.

This got me thinking about perhaps investing in Singapore’s healthcare stocks to safeguard my future. And when it comes to healthcare, three of the biggest names in the industry came to mind: Raffles Medical Group (SGX: BSL), Thomson Medical (SGX: A50), and Q&M Dental Group (SGX: QC7).

Before diving into the comparison, it will be good to understand their respective business models.

Raffles Medical is one of the most famous healthcare brands in Singapore, and some might say it is a more “atas” provider of healthcare.

Apart from being a private healthcare provider in Singapore, they also operate medical facilities in 12 other cities which include Cambodia, China, Japan, and Vietnam. They also own Raffles Hospital, a tertiary care hospital in Singapore that is extremely well-known too.

The business was started in 1979 and the company is known for its focus in Obstetrics & Gynaecology and Paediatrics with 35 specialist clinics in Singapore.

Q&M Dental is a brand which probably needs little explaining too, as most of us would be familiar with their dental outlets across Singapore.

They were first established in 1996 and have grown very quickly over the last few years. Currently, the group has more than 70 outlets in Singapore and 14 dental outlets in Malaysia, and one in China. They have also received quite a number of awards over the years.

EBITDA stands for Earnings Before Interest, Taxes, Depreciation and Amortisation. This just means earnings without these associated costs.

From the table, it is clear that Raffles Medical generates the most amount of revenue, and has one of the best profitability margins. Q&M is probably the next most profitable, as it has a much higher net profit margin than Thomson Medical, despite smaller revenues.

To get an in-depth analysis of Raffles Medical Group, click here.

The current ratio is a figure used to represent short-term liquidity, which is just how well a business can fulfil their short-term financial obligations.

The higher the ratio, the better.

Debt/Current Assets is a measure of how much debt there is relative to a company’s short-term assets. Typically, the lower the ratio, the better position the company should be in when paying off debt.

Debt/EBITDA measures how much debt is there relative to earnings. The lower the ratio, the better.

Interest Coverage Ratio, on the other hand, represents how much earnings there is relative to interests payments. Again, the lower the ratio the better.

When it comes to short-term liquidity, it seems that Q&M is the best based on their current ratio, followed by Thomson Medical and Raffles Medical.

To find out if Q&M Dental Group shares could be a good buy, click here.

For debt and interest costs profile, Raffles Medical seems to be the best, followed by Q&M and Thomson Medical. This is because relative to their earnings, Thomson Medical has a large amount of debt which requires servicing.

Market Cap refers to the market value of a listed company’s outstanding shares.

It is calculated by taking the total number of shares outstanding multiplied by the share price. This is a common metric used to determine the size of a company.

P/E, P/B, and P/S ratios are all different metrics used to value a company. These ratios represent how much you are willing to pay through the purchase of shares for a certain portion of a company’s performance.

The higher these ratios are, the more “expensive” the stock is.

From the table, we can see that Raffles Medical has the largest market capitalisation, followed by Thomson Medical and Q&M. In fact, Q&M is much smaller than the other two companies based on market cap.

So… Which Stock Should I Invest In?

I believe my analysis so far might not be sufficient for such a decision.

If you’re interested, I have given a much more in-depth analysis of each of these three stocks on the Seedly Q&A platform:

Which healthcare stock would you pick and why? Share with us in the comments below!