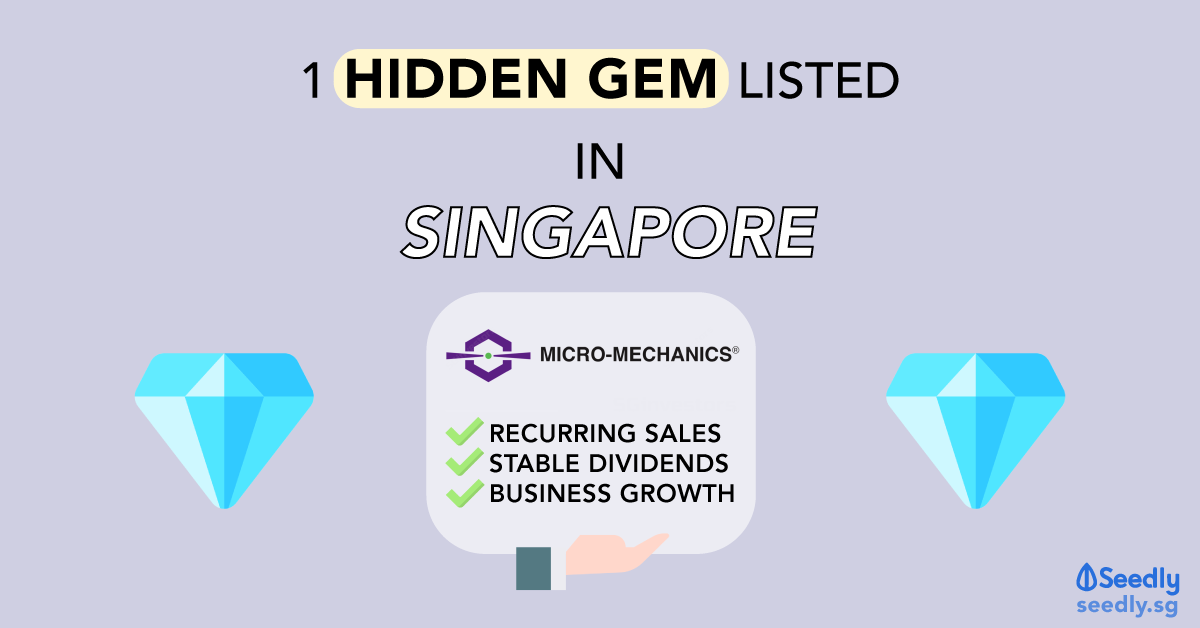 Investors who are searching for an under-the-radar company in Singapore can look no further than Micro-Mechanics (Holdings) Ltd (SGX: 5DD). The company is involved in the semiconductor industry and is also not extensively covered by brokers.

Here, let’s look at Micro-Mechanics in detail, including what its business is about, its financial highlights, future prospects, and the valuation. Micro-Mechanics is also featured as one of the 30 Singapore shares to watch in 2020.

TL;DR: Is Micro-Mechanics A Stock To Hold For The Long-Term?

Some investment merits of Micro-Mechanics:

What Does Micro-Mechanics Do?

Micro-Mechanics is involved in designing, manufacturing, and marketing of consumables and precision tools that are used in the semiconductor industry.

Some of the products the company produces can be found on its website.

The company serves a worldwide base of customers from its five manufacturing facilities located in Singapore, Malaysia, China, the Philippines and the US. It also has a direct sales presence in Taiwan and Europe. Micro-Mechanics’ customers include nearly all of the American, European, Japanese and Asian semiconductor makers. 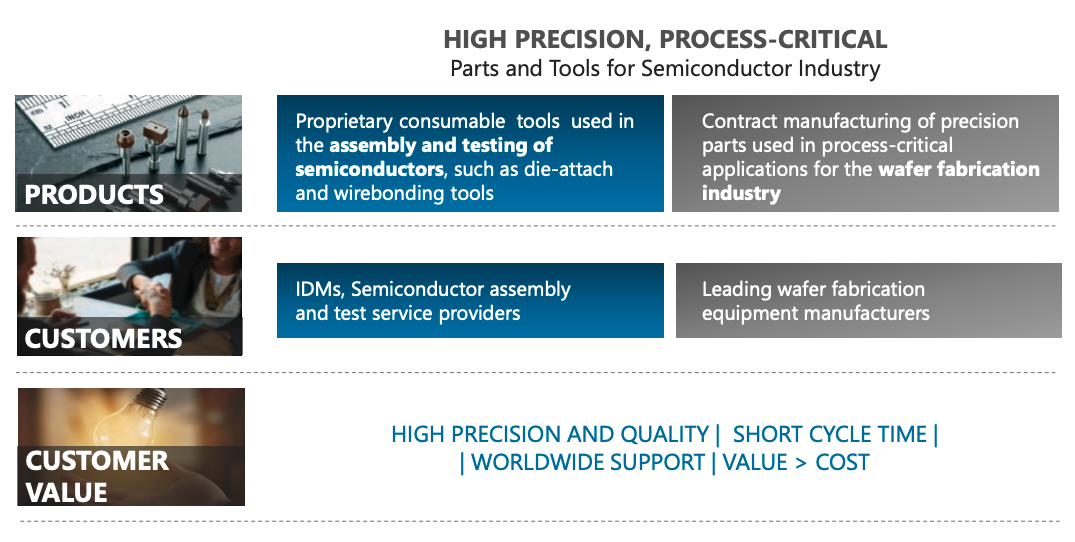 What Gives Micro-Mechanics Its Competitive Advantage?

Since the parts that Micro-Mechanics produces are consumables, they are required to be replaced frequently by its customers. This gives the company recurring revenues, which is great. This key feature makes Micro-Mechanics less susceptible to the semiconductor industry cycle than an equipment supplier, for example.

Micro-Mechanics also doesn’t have any single direct rival which competes on its full range of products and technical services in its current geographical markets. There are only companies that compete with Micro-Mechanics in certain ranges of its product offerings. There are small machine workshops that can produce precision tools, but they don’t have the resources and scale of Micro-Mechanics. The breadth of services offered by Micro-Mechanics makes it a one-stop shop for its clients.

Micro-Mechanics relentless focus on quality, cost and cycle time are also valued by its customers.

The company’s competitive advantage also shows up in its financials.

In terms of return on equity (ROE), which is a measure of how efficient management allocates capital and also an indicator of a company with a durable competitive advantage, was at 22% in FY2019. Any figure above 15% is high in my books.

How Has Micro-Mechanics Performed Financially?

For FY2019, revenue declined by 7.3% to S$60.3 million due to a slowdown in the global semiconductor industry. This fall in the top-line, together with higher depreciation costs from capital investments, caused the company’s earnings to plummet 24.5% to S$12.9 million. It should be noted, however, that the revenue decrease was not as bad compared to the 14% fall in global chip sales.

Things seem to be turning around lately.

As of 30 September 2019, Micro-Mechanics had a cash balance of S$24.3 million with no borrowings. The strong balance sheet, coupled with a healthy free cash flow generation, will enable the company to tide through the slowdown in the semiconductor industry.

How Have Shareholders Been Rewarded All These Years?

Despite the slowdown in the semiconductor industry, Micro-Mechanics maintained its total dividend in FY2019 at S$0.10 per share.

Micro-Mechanics said that the stable dividend payout is in the spirit of “keeping with its long-held practice of rewarding shareholders”.

It also added that maintaining the dividend was a show of confidence in both the company’s and the semiconductor market’s long-term prospects.

From FY2003 to FY2019, Micro-Mechanics increased its dividend by a whopping 1,150%, delighting long-term shareholders in the process.

As of 30 August 2019, Micro-Mechanics’ founder and chief executive officer, Christopher Reid Borch, owned around 52% of Micro-Mechanics, either directly or indirectly.

The high insider ownership shows that the company’s top leader has plenty of skin in the game, and his interests would be aligned with those of Micro-Mechanics’ minority shareholders.

What Are Micro-Mechanics’ Future Prospects?

Cyclicality is typical in the semiconductor industry.

According to The World Semiconductor Trade Statistics (WSTS), worldwide chip sales during the first eight months of 2019 fell by 14.6%. As a result, WSTS now expects chip sales to contract 13.3% in 2019 to US$406.6 billion.

However, over the long run, the semiconductor sector has a high probability of doing well since there’s continued demand from technologies and devices that require chips, such as mobile phones, artificial intelligence (AI), and fifth-generation (5G) cellular communication.

In its latest earnings release, Micro-Mechanics said the following about the semiconductor sector’s prospects (emphasis is mine):

“Due to the cyclical nature of the semiconductor industry, we prefer to focus on the industry’s long term trends and try not to get preoccupied by short-term variations. We believe the semiconductor industry is poised for a prolonged period of solid growth as chips are becoming increasingly embedded in nearly every aspect of modern life from today’s smart phones to tomorrow’s driverless cars. Hence, the key to the Group’s success lies in our continuing ability to seize long-term opportunities and correctly identify the initiatives and investments that bring value to our customers.”

Is Micro-Mechanics Cheap or Expensive?

At Micro-Mechanics’ share price of S$1.80 at the time of writing, it has a trailing price-to-earnings ratio of 19 and a dividend yield of 5.6%. In my opinion, the valuation is undemanding given the quality business and its favourable long-term prospects.

What Are Some Risks With Micro-Mechanics?

The main risk with Micro-Mechanics right now is that the semiconductor industry does not recover. If that happens, Micro-Mechanics’ business could be hit even further.

Another risk I can think of is that of customer concentration.

For FY2019, around 35% of total revenue came from its major customers. That figure has increased from about 30% each from FY2013 to FY2018. I’ll be concerned if the customer concentration figure continues to go up in the years ahead. The reason being, if any of the customers pull out for any reason, Micro-Mechanics’ business is likely to be harmed.

Some investors may wonder if the US-China trade war affects Micro-Mechanics’ business in China. You can put your worry to rest as the company’s factory in Suzhou mainly serves the domestic market and not the export market. Therefore, Micro-Mechanics’ China sales remained relatively steady for FY2019 in spite of the ongoing trade tensions.

I discussed the above and more in my podcast with Value Invest Asia (#notsponsored). If you are keen, you can check out my interview here or directly from:

Why not check out Seedly’s QnA and participate in the discussion surrounding stocks like Micro-Mechanics (Holdings) Ltd (SGX: 5DD) and many more!