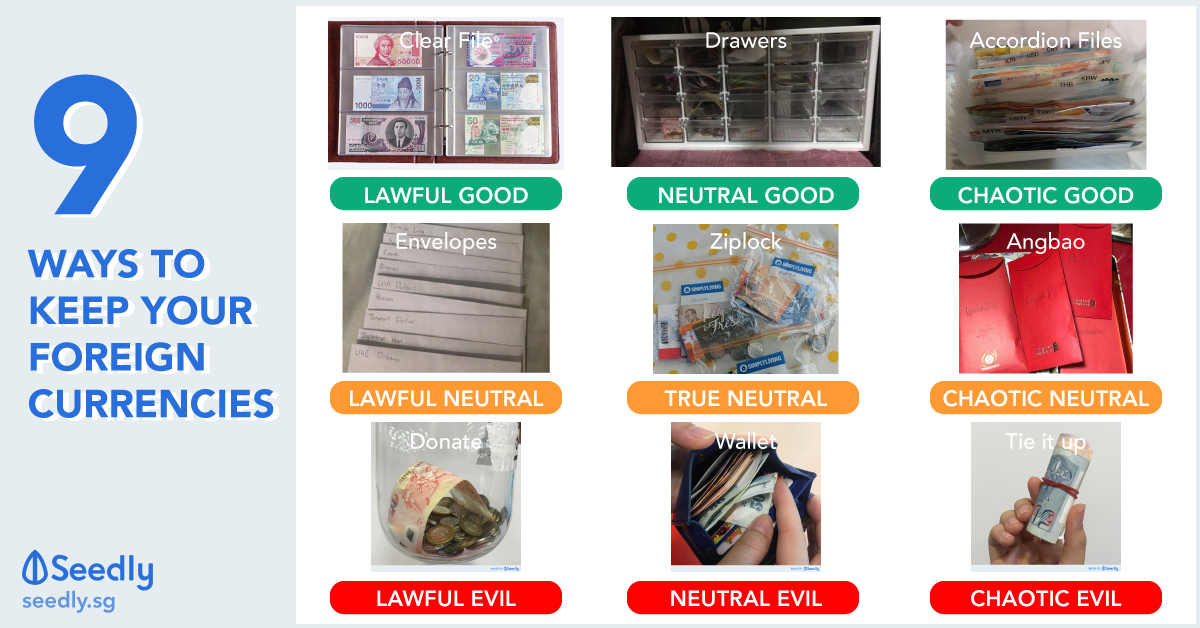 Oh yes, the dreaded reality-check once you’re back from your holiday. Time to unpack your travel-hauls, maybe showcase them to your Instagram followers too.

If you have unused foreign currencies left, you would either keep them for a future visit or maybe just change back to the Singapore Dollar.

Some ways that the community has shared, nicely CATegorised into 9 different types of people:

1. Categorising them in Envelopes

“I usually keep those that I think I will go back again, and put them into envelopes sealed with the amount and exchange rate written, as a reference when I eventually do go back to compare how exchange rates have changed.”
– Kuek Jinhua

“Envelopes, because usually when I come home I’m left with small notes only ?”
– Shawn Lee

“I use (free) envelope, those you get from CC or other types of bills.”
– Bang Hong

You can also recycle your angbaos (red packet) to store your leftover foreign currencies. Now you can put that super chio (pretty in hokkien) angbao to good use. We know you have been secretly collecting them! ?

“Angbao, and put them in country alphabetical order in a recycled case/box.”
– Queenie Wong

Very similar to using envelopes but ziplock bags allow you to see everything that you have in them, from cards to coins!

“I use zip lock bags to keep each currency so that I can clearly see the currency and store the coins as well.”
– Jeff Yeo

“I just put them in ziplock bags hahaha! Usually I do keep other momentos or transportation cards etc from my trip as well ?”
– Mitsueki Ademaro

An alternative to ziplock bags would be this transparent file-bags from Taobao!

“I bought pouches from Taobao – keeps them nice and neat!”
– Jessica Quek

Jessica had so kindly provided the link to her alternative to ziplock bags.

4. Filing them with Clear Files

If you are really sentimental and would sometimes love to look back at the countries you’ve once touched foot on, using filing your currencies in a clear file would make your reminiscing easier. Just an idea.

“I keep it~ some as collection in clear folder for both notes & coins (similar to the image but this is not my collection; google image)
– Soon Xiaohui

Somebody give this guy a prize!! With the highest number of reactions to his idea, I am pretty sure almost everyone who saw his idea was instantly SOLD.

An accordion file from DAISO would cost you S$2, and save you tons of trouble!

“I keep mine in small accordion files from DAISO. Coins, cards from each country too”
– Xiaowei Chen

6. Categorise them in a drawer

This brings perfectionist to a whole new level. Though not the most convenient idea, but it is so pleasing to see especially if you have filled up all the drawers.

“Been there with many envelopes, wallets, bags..until I found this suitable drawer that fits all my notes!”
– Benson Tay 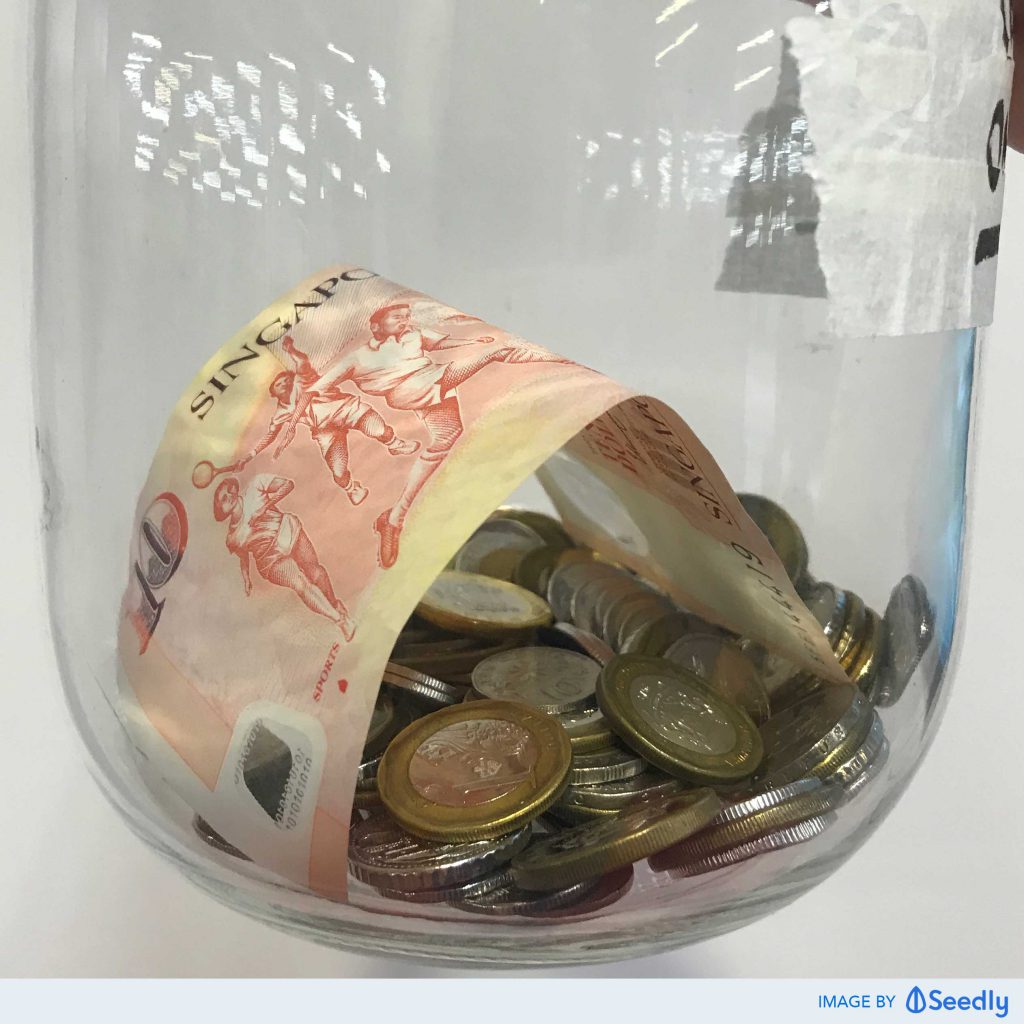 7. Donate them before leaving the country

Especially coins. I do try as much as possible to donate the remaining coins that I still have with me before leaving for the airport.

“I keep those that we would commonly spend. For currencies left after a trip overseas, I will change back. For coins, I will throw all into those com chest box at airport to donate.”
– Kiki Cantabile 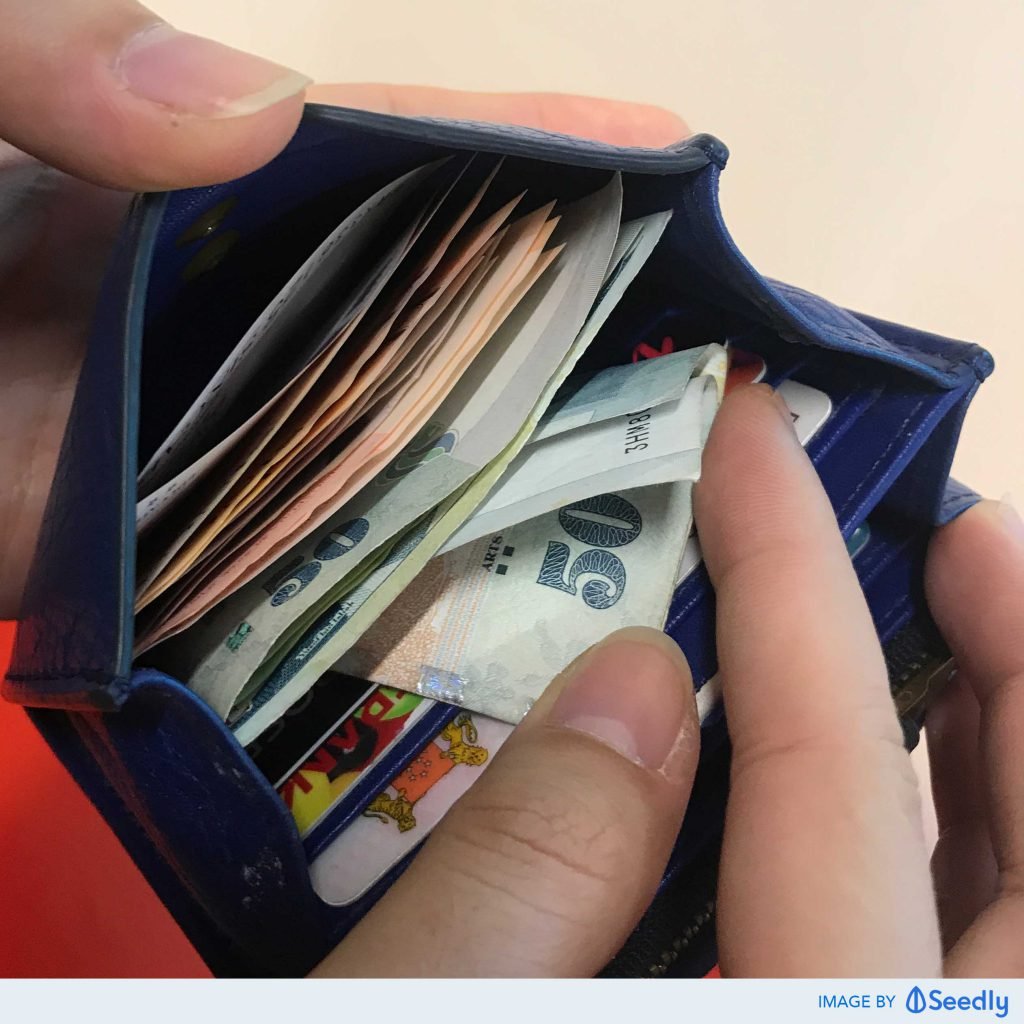 8. Leave it in your wallet

Know of that one friend that has a Benjamin Franklin note in his wallet and occasionally flashes them whenever he gets the opportunity to?

Sometimes with that few dollars left, you might feel categorising them would be

“I squeeze my unspent ringgit into my wallet.”
– Nicholes Wong 9.  Tie them up with a rubber band

And we shall end with the ultimatum, the chaotic evil.

Lastly, change back to the Singapore Dollar.

If you do not want to keep the foreign currency and be exposed to forex risk, change it back to the Singapore dollar. Everyone tells me that by doing this you are losing money, for sure. But it really depends on the market condition as well.