Singapore is a beautiful country to live in and we are extremely lucky that we are well protected but many of us have a secret wish that if we could emigrate, we would (especially somewhere colder!).

Some of us may not completely agree with this and are happy with staying in Singapore but for those of us out there who think “what if?”, now is your chance to see if you might just be one step closer to migrating.

Comparison Between Salary/Wages And Cost Of Living 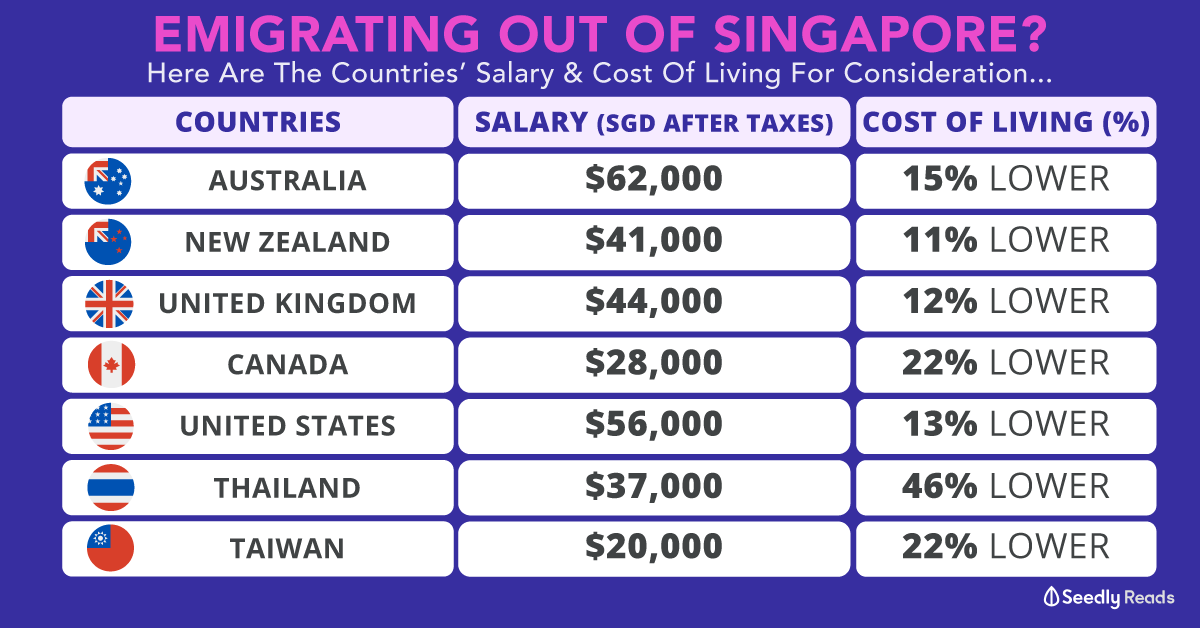 As stated by Dr Leong to Straits Times, the population statistics of Singaporeans living abroad has increased to 213,000 which is a 24% increase from 10 years ago!

We’ll take a look at the most common countries that Singaporeans are moving to as well as the cost breakdown!

Let’s start with the most popular country Singaporeans aim to move to… With 67,000 Singaporeans as of 2015, it’s no surprise that it’s… Australia.

Many Singaporeans aim to move here because of its great opportunities to study but also because of how it is somewhat similar to Singapore, with it being a multi-cultural society!

Based on their average weekly earnings as reported by the Australia Bureau of Statistics, the average Australian earns $88,150.40 AUD annually. With the current exchange rate of S$1 = $1.08 AUF, you’ll approximately be earning S$81,000 annually.

Given that you have chosen to reside permanently in Australia, you’ll be subject to their Resident income tax rates:

Data by Expatistan shows the cost of living in Australia is 15% cheaper than Singapore. I suppose the handy tip to keep your expenses low hold true regardless of where you are at, is to cook at home since the cost of food in Australia is slightly higher!

Australia’s neighbour that is starting to rope in Singaporeans due to our language and educational similarities. Those of you who have seen the campaigns posted by the New Zealand government, we know why some of the reasons to consider this country would be the wide-open spaces where there are more sheep than people as well as the wonderful climate.

New Zealand has a few skill shortages which they classified as long-term shortages, immediate shortages, and Construction and Infrastructure shortages.

Here is the list of occupational shortages New Zealand is experiencing :

Based on Stats NZ’s data on their average weekly salary, the average salary in New Zealand currently sits at $55,780.92 NZD. With the current exchange rate of S$1 = 1.12 NZD, you can expect an annual salary of approximately S$49,000.

Personal income tax rates for individuals are as follows:

While the GST for New Zealand is way higher at 15% on most goods and services, the cost of living still remains relatively low.

Another multi-cultural society that is also known for having densely populated cities, moving there would be no problem especially with there being no language barriers as well as our academic certification following theirs, finding a job will be made slightly easier.

Here is the list of occupational shortages in the United Kingdom:

Based on their average weekly earnings by the Office of National Statistics, the average earnings are projected to be £28,288 annually. With the current exchange rate of S$1 = $0.56 pounds, you should be earning approximately $50,000 annually.

One interesting fact is that the United Kingdom provides a tax-free personal allowance of £12,500 which means, instead of having to pay tax for the full £30,420, you will only have to pay tax for £17,920.

Individuals are subjected to the following income tax rates:

Looking good so far? One thing to take note of though, the equivalent of GST in the United Kingdom, VAT is currently at 20%.

The second-largest nation in the world with more lenient regulations, Canada would give Singaporeans chance to full citizenship easily due to their low population growth rate. This gives you and your family access to healthcare and public education which will allow adjustment into Canada easier.

Canada has a pretty long list of occupational shortages you can take a look at:

Now, good luck with calculating your federal tax rates since there are different tiers:

While the base GST in Canada is considerably lower at 5%, some provinces are subjected to regional provincial sales taxes, bringing the total sales tax (HST) to 13%.

Good news is, the cost of living in Canda is 22% cheaper! While personal care can be more expensive, major expenses like housing and transportation are significantly lower.

Canada’s neighbour as well as the country where many people move to live the ‘American Dream’. This dream may or may not be achievable especially with the tightening of immigration policies. It doesn’t hurt to try though!

Here are the occupational shortages the United States is experiencing:

Projecting with the weekly median earnings as of the fourth quarter of 2019, a good gauge for your yearly income will be approximately $48,672. With the current exchange rate of S$1 = $0.74 USD, you’re likely to draw an annual income of S$65,000.

Assuming you are an individual taxpayer, your income tax rates are broken down into different brackets:

The United States does not have a standard sales tax and Americans generally pay between 2.9% to 7.5% across different states, individual governments can also charge their own sales tax of 1% – 5%.

Thankfully, the cost of living in the United States is still lower in general as compared to Singapore, the largest bulk of your expense may be going to your personal care. Of course, this highly depends on the state you chose to move to.

Thailand is easily one of the most popular travel destinations amongst Singaporeans since it’s nearby and affordable.

However, while we are happily enjoying the street food and culture in Thailand, we don’t notice the big problem that they face: labour shortage.

Similarly, Thailand faces a low birth rate and an ageing population, but another factor explaining the labour shortage is the large proportion of the unskilled workforce in Thailand.

Amongst other occupations, here are some of the top occupational shortages that Thailand is facing:

As an individual taxpayer in Thailand, you will also be subjected to various tax rates:

Thailand currently has the same sales tax rate as Singapore, at 7%.

Thailand has the lowest cost of living compared to Singapore in this list, so even if you are earning the minimum salary, you should still be okay!

Known for its street foods and night market, it’s no wonder why Taiwan is one of the most popular travel destinations for Singaporeans.

With a rather worrying labour shortage, Taiwan has also opened up more to attract foreign talents to help meet the demands of the economy.

Some of the occupational shortages in Taiwan include:

The sales tax in Taiwan is slightly lower as well, at 5% on most goods and services.

While the cost of living is lower in Taiwan overall, do be mindful of your daily expenses on food as it is slightly higher compared to Singapore and small amounts add up over time.

What Do I Do Now?

The most commonly sought after occupational sectors that the countries above are looking for are in Finance, Engineering and IT. If you have found an ideal country that suits your occupation, here are a few things you will need to consider before packing everything and moving out of the country:

Also, be sure you have an emergency fund saved up to tide you over bad times.