Ever Wondered How A Thai Disco Worker (Siam Bu) Makes Money? They Can Make More Than $6,620 per Month!
2512
shares Ever Wondered How A Thai Disco Worker (Siam Bu) Makes Money? They Can Make More Than $6,620 per Month!

I have a problem.

I am spending way too much time on my latest addiction.

Met with a tight editorial deadline and having spent way too much time on the Gong Tao Help Desk, it is only fair that I dedicate an article to this topic.

All You Need To Know About Siam Diu (Thai Disco) 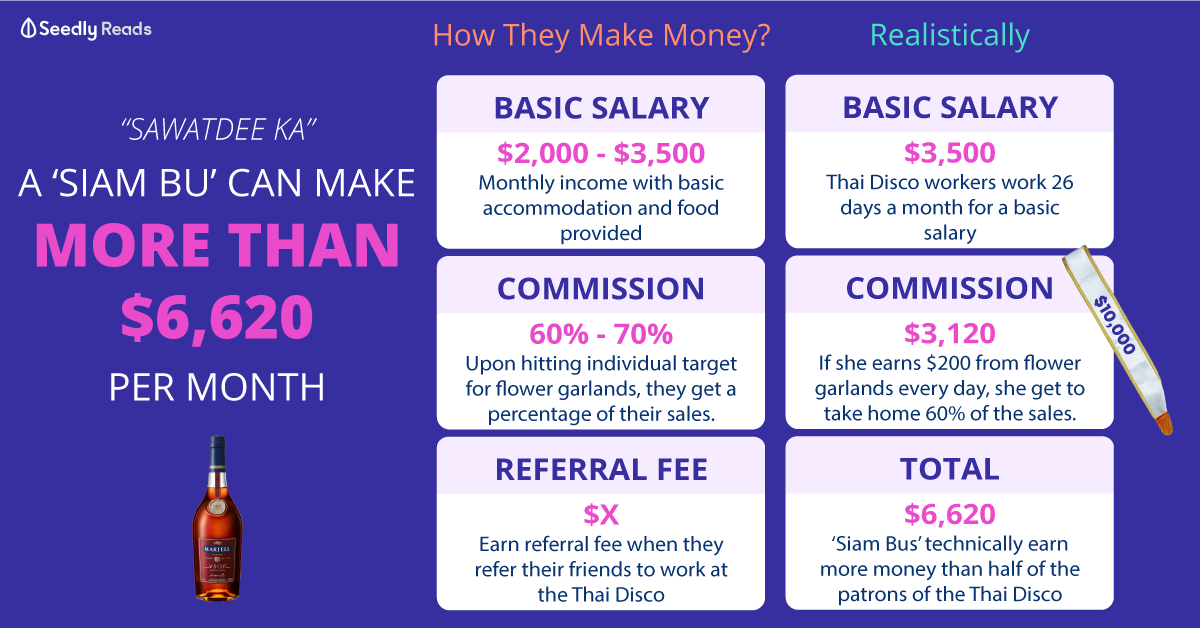 You see, most of the content available painted Thai Discos or Siam Dius in the same light.

Step into a different world, a murky underground Thai-themed night club, where Singaporean men take a break from life to seek “love”.

Have a casual drink from the beer tower you ordered, challenge the Siam Bus to a game of dice while experiencing “girlfriend experience” at its finest.

Some may argue that this paid “girlfriend experience” is not true love, but frequent patrons of Siam Dius encompass the ideology of a Chinese saying “不在乎天长地久, 只在乎曾经拥有” (translation: Everlasting love does not matter to me, as long as I once had you).

At a Siam Diu, there are ladies (usually from neighbouring countries) who work at the club to sing and dance at intervals. When they are not performing, they mingle with guests, play drinking games and accompany them.

If the guest likes any of the Siam Bus, they can buy her garlands and sashes. This is also the same reason why some people label Siam Diu as Flower Joint.

The extent some of these men decorate their favourite Siam Bu with Garlands and sashes is insane. With each garland and sash ranging from $10 to $10,000, some spend thousands a night just to impress.

That got us thinking.

How do Siam Bus and Thai Disco performers make money? How much do they make from these garlands?

How Do Siam Bus and Thai Disco Performers Make Money?

Truth is, most of these girls are here on a working visa, which means they are only here for a maximum of six months. We have also heard of the frequent Police raids at these flower joints to arrest girls working illegally without a work pass.

What motivates these girls to take that risky leap of faith in a foreign land can only be explained, as we break down the potential amount of money they can make.

We did a little bit of research and “user interview” to find out how they make money.

We gathered that they are usually paid a basic salary, commissions and referral fee.

Out of the total commission that they receive, their respective agent will take a cut and receive a portion of it.

As most of the Thai Disco workers come from our foreign neighbouring countries, the amount is actually pretty lucrative when we factor in the exchange rate.

We draw a comparison of this basic salary with the median income of the respective countries these workers came from.

If they were from Taiwan or South Korea, the basic salary is indifferent.

This is until we add in the possible commission they will receive.

Each Thai Disco worker is actually given an individual target to meet.

This is the target amount they need to earn from the flower garlands that the customers purchase for them.

From what we understand, upon hitting a certain individual target, they will get 60% to 70% of their target sales. Their agents will receive the rest of the 30% to 40%.

We managed to get our hands on an example of a remuneration package sent to interested applicants to work at a Thai Disco.

It can be translated into

Imagine attracting a wealthy customer that buys his eye-candy a $10,000 flower garland. She hits her monthly target in one night.

As mentioned earlier, most of the Thai Disco workers are here on a short-term working visa, which means that they will only be working for the Siam Diu for six months. For those that are working without a working visa (illegally), their stay can be as short as one month.

This means that there is a constant demand for manpower to replace those girls that are leaving.

The third source of income will be from the referral fees when they refer their friends to work in Singapore as a Thai Disco workers.

Here’s an example of what an advertisement looks like:

A Realistic Example of How Much Siam Bu Makes per Month

To give a realistic estimation, assuming that a Siam Bu

They are probably earning more than half of the patrons of the Thai Disco, given that Singapore’s median income is at $5,596 per month.

All that glitters is not gold.

Behind the short stint of a possible fat paycheque, the fighting spirit of these Thai Disco workers is worth commemorating.

Back against the wall, at a young age, they gathered enough courage to work in a foreign land in hope of a better future. I have also come to realise that some of their living condition may not be the best.

Usually cramped up in a shared apartment, these girls are given the bare minimum to survive.

Given that they are working 26 days a week, accommodation is merely to serve the basic needs of resting for the next day’s work. A basic supply of food such as Maggie noodle, eggs and rice is provided, and that’s about it. For anything more palatable, these girls turn to the temporary love they found here in Singapore.