From S$354 Million to S$306 Billion: 5 Lessons From How Temasek Invests From S$354 Million to S$306 Billion: 5 Lessons From How Temasek Invests

You have to hand it to Temasek Holdings.

For the uninitiated, Temasek is a global investment company based in Singapore.

However, it is managed like a commercial company and aims to and deliver sustainable long-term value for its stakeholders.

Like a commercial company, Temasek owns the assets it manages in its portfolio, is required to pay taxes, issues international bonds and is credited rated with Moody’s Investors Service (Moody’s) rates Temasek at Aaa while the S&P Global Ratings (S&P) rates them at AAA.

As an investor, there is a lot we can or cannot learn from their investment strategy and success that can be applied to your investment portfolio.

Here is what you need to know!

TL;DR: What You Can or (Cannot) Learn From How Temasek Invests We will be exploring Temasek’s history, performance investment philosophy, and delving into what you can learn from how they invest.

This includes an explanation of why it is important to have a clear investment strategy and philosophy.

The importance of a long term investment strategy.

And staying calm and when it may be good to cut your losses.

In addition, we will cover why you cannot invest blindly in the companies Temasek is investing in as well.

But, we understand that it is impossible for retail investors to adopt Temasek’s portfolio since 48% of its portfolio represents holdings in privately held companies (or unlisted assets).

Also, the views expressed in this article are our own and do not represent Temasek.

Temasek’s first and only investors are the Singapore Government.

Back in 1959, the Minister for Finance Incorporated (MFF Inc), a statutory board set up by the People’s Action Party to invest government funds.

Over the years MFF Inc had accumulated a portfolio of share in 35 companies worth about S$354 million. This initial portfolio was transferred to Temasek in 1975 in exchange for 21 million shares.

Contrary to popular belief, Temasek does not manage our CPF, the official foreign reserves or even the Singapore Government reserves.

Temasek uses the Total Shareholder Return (TSR) metric, which measures the annualised performance of a company’s investment portfolio over time.

It accounts for the appreciation in stock prices as well as the dividends paid out to shareholders and is conveyed as a percentage as the compound annual growth rate. The Total Shareholder Return (TSR) is a compounded and annualised measure, which includes dividends paid to Temasek’s shareholder, who is the Minister for Finance and excludes capital injections from its shareholder.

Do note that this metric excludes the capital injections from Temasek’s shareholders obtained from borrowings and debt financings like the Temasek Bonds and Euro-commercial Paper Programme.

If you look at Temasek’s TSR over the long term, Temasek has delivered 14% since its inception in 1974.

Over the medium-term (10 years), the is cut as Temasek’s TSR dropped with a 5% compounded TSR. The 20-year return to shareholder is at 6%.

Whereas for the short term, Temasek has performed respectably as its one year TSR stands at about -2.28% despite the fallout from COVID-19.

In comparison, these market indices in Asia and the world performed worse over the same time period:

Overall, Temasek has performed well over the long term, decently in the medium term and has only suffered a small drop in the short term.

How did they achieve this? Let’s look into their investment philosophy!

What is Temasek’s Investment Philosophy?

Essentially, Temasek is an active equity investor owner with long term strategic goals. The company invests for the long term and aims to achieve sustainable value for its shareholders.

Over the years, Temasek has diversified its portfolio, moving from investing in Singapore to investing all around the world.

This gives you an idea of where they invest.

As for how they invest, Temasek engages in thematic investing as their investment philosophy revolves around four basic investment themes:

Temasek aims to build a forward-looking and resilient portfolio of companies, through our Environmental, Social and Governance framework, that contributes to the progress of society and achieves a better world for this and future generations.

The resilience of the portfolio in times of crisis is something investors can look at too!

Based on these themes, Temasek extrapolates this further with these six structural trends that direct where they invest their capital.

1. Have a Clear Investment Strategy and Philosophy

Having a clear investment strategy and philosophy is something we can adapt from Temasek.

For example, Temasek invests in disruptive growth companies as it aligns with their long term investing approach. Temasek stated that they:

In the last year or so, Temasek has stepped up its investments into non-banking financial services such as Sheng Ye Capital, a supply chain finance company.

Sheng Ye has teamed up with PhillipCapital and fintech firm Advance.AI to compete for a wholesale digital banking license in Singapore.

Temasek has also invested in Ant Financial, a leading Chinese FinTech platform that is the backbone of the Alibaba groups payments.

Technology is also another sector that Temasek believes in. This led to investments in DoorDash, an online food delivery marketplace; Zomato, restaurant aggregator and food delivery startup headquartered in India; and Tokopedia, an Indonesia-based e-commerce company.

You also do not necessarily have to invest around themes.

Personally, my investment strategy revolves around investing for the long run, invest in companies and causes that you believe in.

And diversify your portfolio both among companies and market sectors.

2. Invest for the Long Term and Stay Calm

More recently, the Black Monday stock market crash in March 2020 affected some of its major portfolio positions like DBS, Singtel and Singapore Airlines.

In contrast, this rate of growth pales in comparison to the 12% increase in its net portfolio value from FY2017 to FY2018.

We should expect the full report to be released in September 2020, as the COVID-19 pandemic had affected the financial reporting for many of its portfolio companies.

Similarly, if our own investment portfolios suffer a dip in the short term, stay calm and concentrate on the long term.

Having a long-term investment strategy means that you focus on performance over time. In that regard, there is something we can learn from Temasek.

This applies to our own investments as we need to determine our financial goals before starting to invest.

Some questions you can ask yourself include:

3. Do Not Hold on to Investments Forever

As investors, we should be investing for the long term and pursue long term returns over short term gains

But, this does not mean you can invest in some stocks and hold them for 20 to 30 years without doing anything.

Even though this may seem kind of obvious, it is more difficult to do in practice.

As humans, even though we might think that we are rational investors, we are still susceptible to the sunk cost fallacy which is defined as the fallacy of using costs that have already been incurred to make decisions.

When a stock from our portfolio’s value falls off a cliff, we tend to soothe ourselves and rationalise that the stock can only go up.

In contrast, Temasek makes this hard choice quite often.

Back in 2015, Temasek divested about S$19 billion, a record amount.

FYI: Divestment is defined as the action or process of selling off subsidiary business interests or investments. Often this is done when the investment is not performing well.

Temasek stated that they were taking the opportunity presented by a “liquidity-driven market rally” to reform their investment portfolio and reduce exposure to industries like the semiconductor manufacturing industry that might not have a bright future.

The key thing to take note of is that Temasek used the proceeds to fund S$30 billion of new investments in growth industries like the technology sectors and financial services which have paid dividends over the years.

When it comes to making investment decisions, the stock price is the first thing investors look at.

Although stock price and capital gains are a factor when it comes to your investing strategy, you cannot discount other factors like dividends when investing too.

Dividend investing offers investors a way to draw a recurring income from their investments and can sometimes be more important than the value of the asset.

As a long-term investor, Temasek benefits from dividends.

Less we forget, dividends from stocks still represent profit for the investor who can choose to reinvest the dividend in other stocks or let it accumulate so you can get the sweet sweet compound interest.

5. Don’t Invest Blindly in Companies That Temasek Invests in

As an institutional investor, Temasek has exclusive investment access to private companies way before they are listed. Temasek also has strategic goals it has to meet as well.

After reading this, you might be tempted to replicate Temasek’s portfolio and invest in the same companies that are so-called ‘state-backed.’ This might not work out too well for you.

This momentous event was called as the COVID-19 pandemic has brought the global airline industry to its knees.

Temasek who owns a 55.46% stake in SIA voted in favour of the Rights Issue and the MCBs Issue. They are also taking up any unsubscribed Rights Shares and Rights MCBs.

This is my personal opinion, but Temasek’s swooping in and committing to provide funding for our national carrier could be done for more than investment-related reasons.

You might want to look at why my colleague Sudhan will not be buying SIA shares despite the Singapore Airlines share price being cheap. 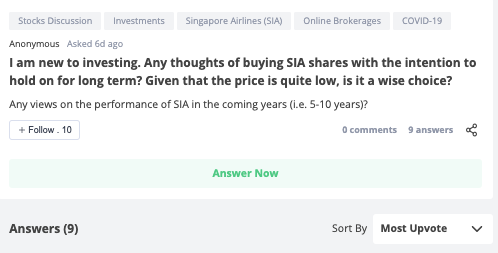 As always, do your own due diligence on the company you are investing in.

The fund manager or investment company may have different investment goals from you. What works for them might not work for you.