How to 6X an Investment Portfolio: Lessons From How Temasek Invests
1576
shares 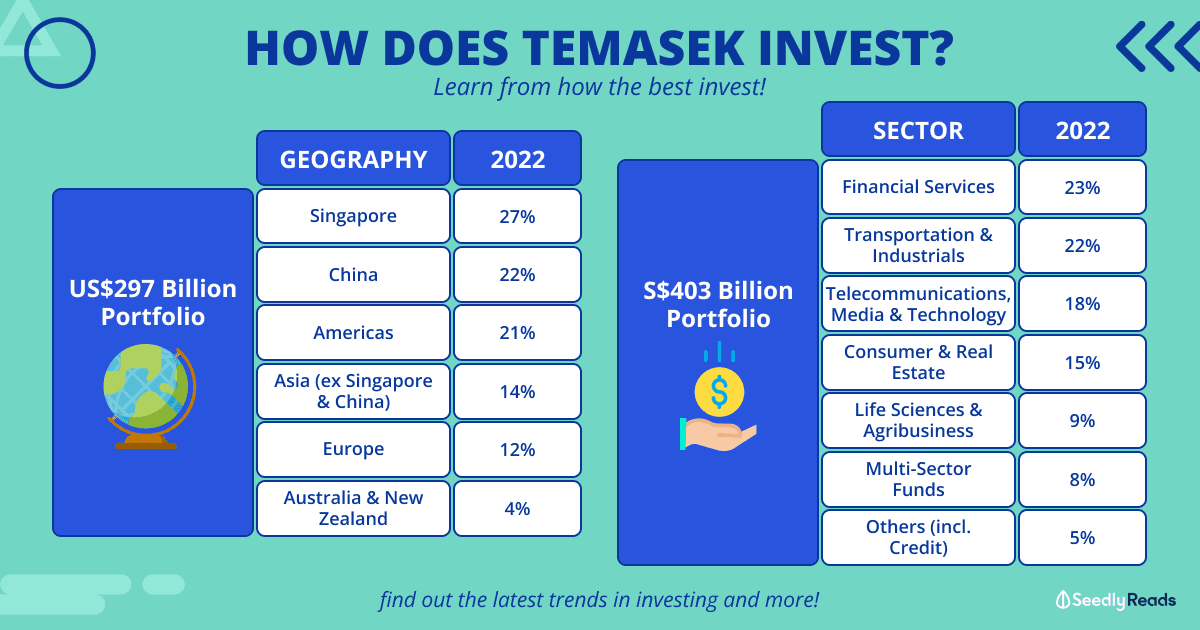 How to 6X an Investment Portfolio: Lessons From How Temasek Invests

You have to hand it to Temasek Holdings.

That is more than a six-fold increase!

For the uninitiated, Temasek is a global investment company based in Singapore.

However, it is managed like a commercial company and aims to deliver sustainable long-term value for its stakeholders.

Like a commercial company, Temasek owns the assets it manages in its portfolio, is required to pay taxes, issues international bonds and is credited rated with Moody’s Investors Service (Moody’s) rates Temasek at Aaa while the S&P Global Ratings (S&P) rates them at AAA.

As retail investors, there is a lot that we can take away from their investment strategy so we can invest wisely too.

TL;DR: What You Can Learn From How Temasek Invests

Disclaimer: The views expressed in this article are our own and do not represent Temasek. The information provided by Seedly serves as an educational piece and is not intended to be personalised investment advice. ​Readers should always do their own due diligence and consider their financial goals before investing in any stock. The writer may have a vested interest in some of the companies mentioned.

Temasek’s first and only investor is the Singapore Government.

Back in 1959, the Minister for Finance Incorporated (MFF Inc), a statutory board, was set up by the People’s Action Party to invest government funds.

Over the years, MFF Inc had accumulated a portfolio of shares in 35 companies worth about S$354 million. This initial portfolio was transferred to Temasek in 1975 in exchange for 21 million shares.

Since then, Temasek has grown this investment portfolio and its assets mainly through capital from its own balance sheet, such as proceeds from divestments, the dividends and other cash distributions it receives from its portfolio and the capital gains from its investments.

Contrary to popular belief, Temasek does not manage our CPF, the official foreign reserves or even the Singapore Government reserves.

Temasek uses the Total Shareholder Return (TSR) metric, which measures the annualised performance of a company’s investment portfolio over time.

It accounts for the appreciation in stock prices as well as the dividends paid out to shareholders and is conveyed as a percentage of the compound annual growth rate. The Total Shareholder Return (TSR) is a compounded and annualised measure, which includes dividends paid to Temasek’s shareholder, who is the Minister for Finance and excludes capital injections from its shareholder.

Do note that this metric excludes the capital injections from Temasek’s shareholders obtained from borrowings and debt financings like the Temasek Bonds and Euro-commercial Paper Programme.

If you look at Temasek’s TSR over the long term, Temasek has delivered 14% since its inception in 1974.

Whereas for the short term, Temasek has performed respectably as its one-year TSR stands at about 5.81% despite the fallout from a US bear market, supply chain disruptions and geopolitical conflicts.

Overall, Temasek has performed well over the long term, decently in the medium term and has only suffered a small drop in the short term.

How did they achieve this? Let’s look into their investment philosophy!

What is Temasek’s Investment Philosophy?

Temasek aims to build a forward-looking and resilient portfolio of companies, centred around intrinsic value and their risk-return framework.

They do this by conducting a bottom-up intrinsic value analysis, with expected returns evaluated against a risk-adjusted cost of capital that is derived using the capital asset pricing model.

Temasek’s investment posture is to ride out short-term market volatility and focus on generating sustainable returns over the long term.

Moreover, they deploy capital to catalyse solutions that can enable the transition to a low carbon economy, and tap on opportunities to build future growth sectors and leading enterprises through efforts in innovation.

The resilience of the portfolio in times of crisis is something investors can look at too!

Over the years, Temasek has diversified its portfolio, moving from investing in Singapore to investing all around the world.

This gives you an idea of where they invest.

For those curious about the reduction in the portfolio allocation of China equities, Temasek has revealed that they remain confident in China and that the portfolio movement is due to price market movements. They have also highlighted that China still has attractive investment opportunities in areas such as Deep Tech.

Have a Clear Investment Philosophy and Strategy

Having a clear investment strategy and philosophy is something we can adapt from Temasek.

They place a strong emphasis on the intrinsic value of a company and use a bottom-up analysis.

Temasek has also stated that they are “happy to sit on cash” and that there is no pressure to buy or sell.

They will deploy cash when a company looks attractive and will hold cash depending on market volatility.

Likewise, as retail investors, we must ensure that the companies we invest in have strong fundamentals, and practice Dollar Cost Averaging (DCA) or even Enhanced DCA (EDCA) to ride out short-term market volatility. 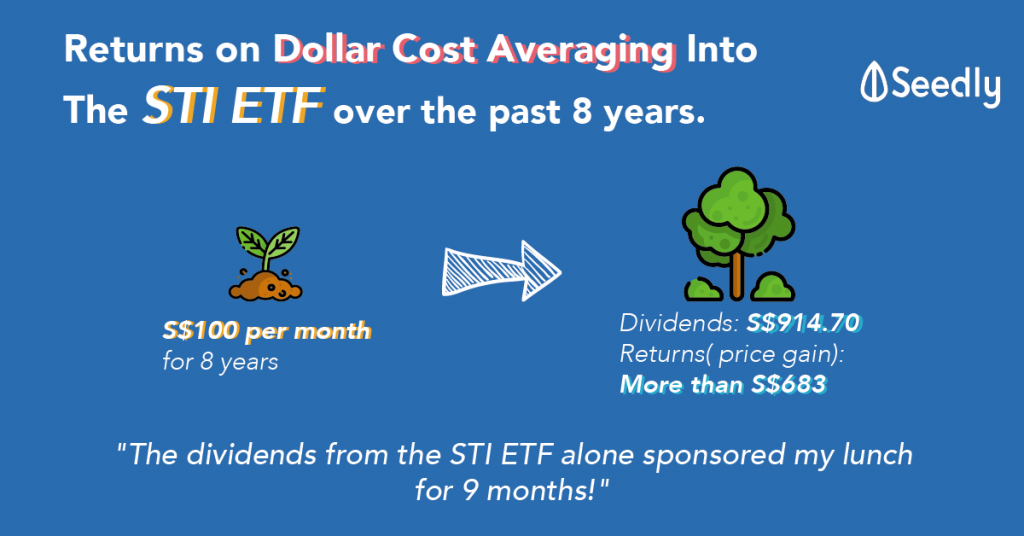 Invest for the Long Term

As any investor would know, the US stock market is in a bear market and things aren’t looking too good right now.

But while they are more cautious compared to a year ago, Temasek continues to invest with the future in mind.

They look at investment horizons of five years or more instead of just 12 months.

Similarly, we should look toward investing for the long term to ride out market volatilities.

Invest When Appropriate, Divest When Needed

That said, it doesn’t mean we should hold onto stocks forever.

According to Temasek, they divest when the investment thesis of a company is played out.

FYI: Divestment is defined as the action or process of selling off subsidiary business interests or investments. Often this is done when the investment is not performing well. 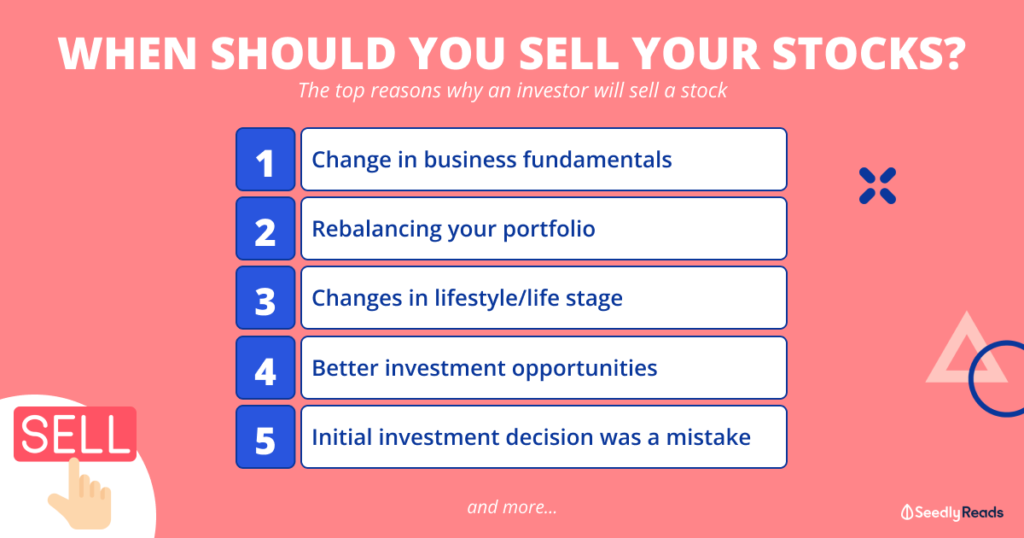 Even though this may seem kind of obvious, it is more difficult to do in practice.

As humans, even though we might think that we are rational investors, we are still susceptible to the sunk cost fallacy which is defined as the fallacy of using costs that have already been incurred to make decisions.

When stock from our portfolio’s value falls off a cliff, we tend to soothe ourselves and rationalise that the stock can only go up.

In contrast, Temasek makes this hard choice quite often.

This financial year, Temasek divested about S$37 billion, the second-highest amount since its inception.

On the flip side, they have also made a record S$61 billion in investments.

This emphasises the importance of portfolio reallocation and how we should also take an active investment approach.

Don’t Be Resistant to Changes

With the rise of blockchain technology and the trend of sustainable living, Temasek has also invested in these sectors.

With new technologies and a rapidly developing world, we must adapt as trends and disruptive technology take shape. However, we must be able to identify what will actually impact the economy.

For example, Temasek has invested in FTX, a cryptocurrency derivatives exchange. You might be wondering…why would they invest in a company that facilitates cryptocurrency trading given the crashing crypto market now?

To answer that question, we need to know that Temasek recognises blockchain as an important technology that will touch businesses and the economy. As a result, they see the opportunity in investing in blockchain-enabled solutions, with an exchange being an example of that.

And while cryptocurrencies have been a hot topic, Temasek says that its crypto exposure has been minimal and that they are exposed through venture funds.

As mentioned before in our articles, we wouldn’t shy away from promising technology, however, we need to be careful when it comes to allocating our investment funds to emerging growth companies. 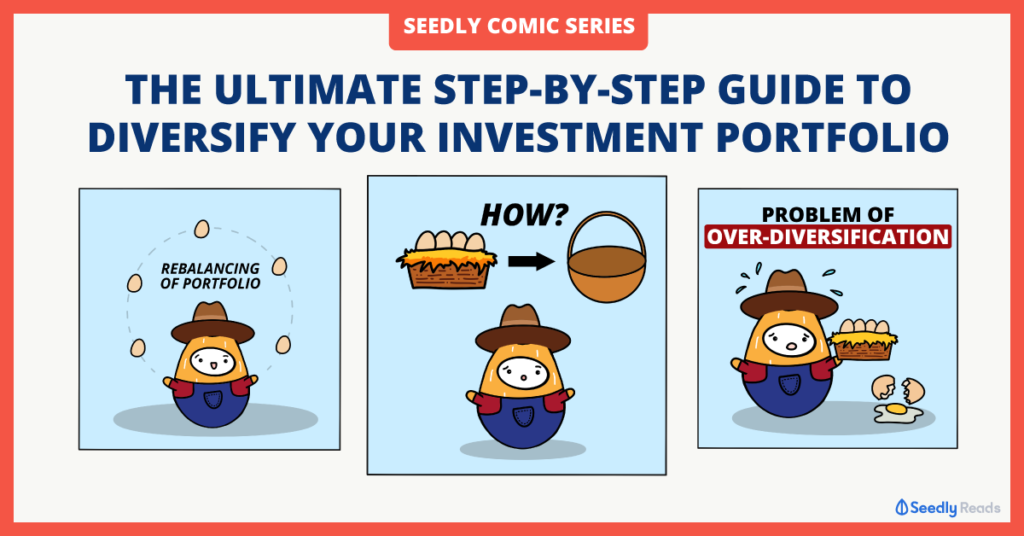