Shiba Inu Coins (SHIB): How To Buy and Should You? Shiba Inu Coins (SHIB): How To Buy and Should You?

Even today, Cryptocurrencies as a whole are still wild volatile, speculative investments.

Many experts warn that you should only invest money that you can afford to lose with good reason.

According to the Bitcoin Volatility Index, an index that measures the standard deviation of the daily returns for the preceding 30- and 60-day time periods for Bitcoin and other assets; Bitcoin is still highly volatile.

FYI: When it comes to investing, standard deviation is often applied to the rate of return of an investment product over a time period. This shines a light on the investment’s historical volatility. The higher the standard deviation, the larger the variance between the price and the mean which is indicative of a broader price range.

Generally, a higher standard deviation indicates that an asset is highly volatile. This means that you bear a lot of risk holding the asset as its price may go higher or lower significantly any other day. The more volatile the asset, the more people will want to avoid it altogether, limit their exposure to it or reduce their risk of holding it by hedging.

In the past 30 days, Bitcoin had a standard deviation of 5.86%. In comparison, gold’s volatility averages around 1.2%, while other major currencies average between 0.5% and 1.0%.

But if you thought holding Bitcoin was risky, wait till you see memecoins like Shiba Inu (SHIB). In the past 30 days, SHIB had a standard deviation of about 400%!

I’ll just be frank. Buying a meme coin like the SHIB is straight-up gambling as the coin does almost nothing fundamentally while its price is largely driven by speculators.

But, there’s more than to this token than meets the eye. Here’s all you need to know about SHIB!

Disclaimer: The information provided by Seedly serves as an educational piece and is not intended to be personalised investment advice. ​Readers should always do their own due diligence and consider their financial goals before investing in any investment product. The writer may have a vested interest in the investments products mentioned. 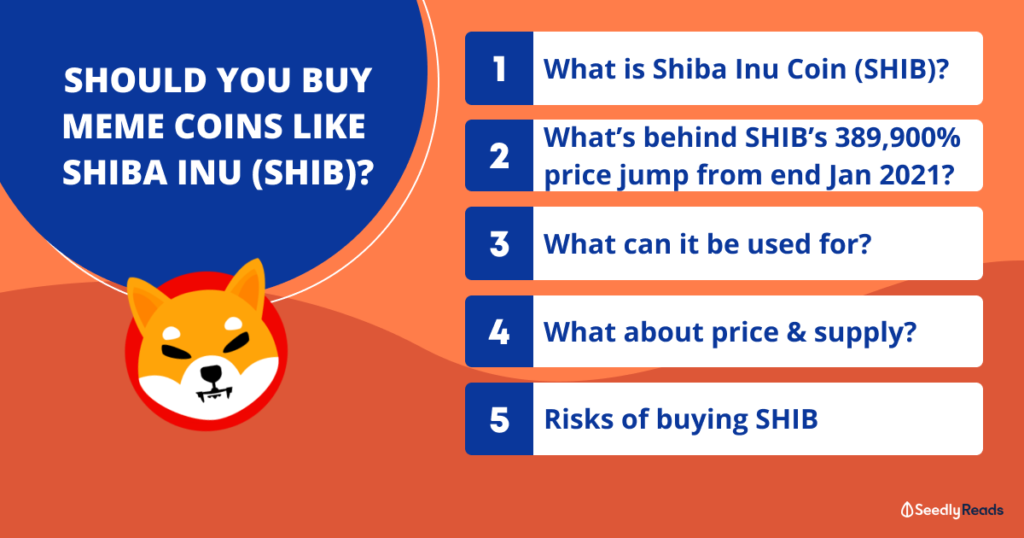 What is The Shiba Inu Coin?

The SHIB token was created back in August 2020 on the Etherereum blockchain by an anonymous individual or group who go by the name Ryohshi.

This is in contrast to Non-Fungible Tokens which utilise the ERC-721 token standard.

As the token is on the Ethereum network, SHIB can actually use smart contracts to make decentralised finance (DeFi) products.

The SHIB token is actually an example of meme-ception as it is a memecoin based on the memecoin Dogecoin. It has also been dubbed the Dogecoin killer.

Currently, there is little to no utility for SHIB.

But, the creators of SHIB have some lofty goals for the future.

According to its ‘Woofpaper’ (Whitepaper) which was updated on 29 Apr 2021, the blockchain project aims to create a DeFi ecosystem consisting of:

In addition, the creators of SHIB also created the LEASH token, a sister token for SHIB which was originally set to be a rebase token pegged to the price of Dogecoin.

But, the coin was subsequently unleashed and will not be pegged to Dogecoin. Unlike SHIB, LEASH has only a tiny supply of 100,000 tokens.

The second token incentivized on the swap offers special rewards for those who provide liquidity.

Once ShibaSwap is launched, owners of SHIB will be able to stake their SHIB tokens to ‘dig’ for ‘BONE.’

In other words, those who stake their SHIB will receive interest in the form of unreleased BONE tokens.

These BONE tokens are special as they are only available on ShibaSwap and are actually governance tokens that will allow holders to vote for proposals for the SHIB ecosystem in 2022.

Another decidedly more wholesome aspect of SHIB is that the SHIB community has launched an initiative to rescue real Shiba Inu dogs.

The community utilised the built-in Amazon Smile feature to donate to this cause.

A percentage of your purchases go to support automatically at no cost to you.

The Tokenomics of Shiba Inu Coin

An interesting feature of SHIB is that every time someone buys SHIB tokens, a percentage of the purchase amount is burned via a transaction fee

This means that the supply of SHIB will drop over time the more it is traded.

The developers of SHIB locked 50% of all SHIB tokens to the decentralised cryptocurrency exchange Uniswap.

This means that the creators of SHIB do no own any SHIB tokens unless they bought them themselves on Uniswap or other cryptocurrency exchanges. This means they cannot dump tokens on the community.

The other 50% of the total supply was donated to Ethereum creator Vitalik Buterin.

What Vitalik did with it was interesting.

Last Wednesday (12 May 2021), Buterin donated 50 trillion SHIB tokens (worth around S$1.6 billion at the time) to the India COVID-Crypto Relief Fund.

A few days later, it was widely reported that Buterin sent about 410 trillion SHIB to a burn address on 16 May 2021, removing about 41% of the total circulating supply of SHIB from the market.

He also included a statement stating that he:

decided to burn 90% of the remaining shiba tokens in my wallet. The remaining 10% will be sent to a (not yet decided) charity with similar values to cryptorelief (preventing large-scale loss of life) but with a more long-term orientation.

By my estimates, Buterin is still holding onto about 40 trillion SHIB tokens now.

Also, there are about 497 trillion SHIB tokens circulating on the market which grants the coin a market cap of about US$4.6 billion.

Not to mention that the SHIB is currently the 26th biggest cryptocurrency by market cap.

At the present moment, SHIB has little to no underlying value or use cases.

SHIB is also not unique as cryptocurrencies are very easy to create, with thousands being minted every day.

The price of it is driven by hype and speculators pumping money into SHIB.

According to BscScan a Binance Smart Chain explorer built by team EtherScan that provides APIs that returns information about accounts, token, contracts and a lot of other analytics; a majority of SHIB tokens are being held by a few individuals.

The top hundred holders of SHIB hold about 78.1% of the total circulating supply of SHIB tokens.

This holder has actually sent them to an address to ensure that no one can have the private key.  This is ensured with addresses with special string called vanities.

As such, the top 99 holders collectively own about 47.6% of the total circulating supply of SHIB tokens.

If you take away what the top holder has burnt, only 69.5% of the total supply of circulating SHIB tokens can still be accessed.

This means that the top 99 holders collectively own about 68% (46.6/69.5) of the total supply of circulating SHIB tokens that can still be accessed.

The existence of these large holders, also known as ‘whales’ in the crypto world poses a risk to the value of SHIB tokens.

This means that SHIB is very susceptible to pump and dump schemes.

Pump and dump schemes are where people organise together on apps like Discord, Slack or Telegram to illegally promote and ‘pump certain coins’ to drive up demand.

This will often result in the coin going up in value temporarily as a result of this promotion.

Next, the people who are pumping the coin will ‘dump’ the coin and sell without warning.

Be very wary of such schemes as more often than not, you are being manipulated by the pumpers of the coin who will sell when the coin reaches their pre-determined price.

Generally, the smaller altcoins are more susceptible to pump and dump schemes due to their smaller market caps and low liquidity which makes it easier to move the price of the coin.

SHIB is one such coin due to its tiny market cap of about US$4.6 billion and low liquidity.

The price could crash any time if a whale decides to dump his/her’s supply of SHIB onto the market.

So if you buy SHIB, there is a very big chance that you could LOSE almost all your capital.

Got More Questions About SHIB and Cryptocurrency?

Sign up or log-in to your FREE Seedly account and claim your free Seedly Crypto Investment Guide under Seedly Rewards. 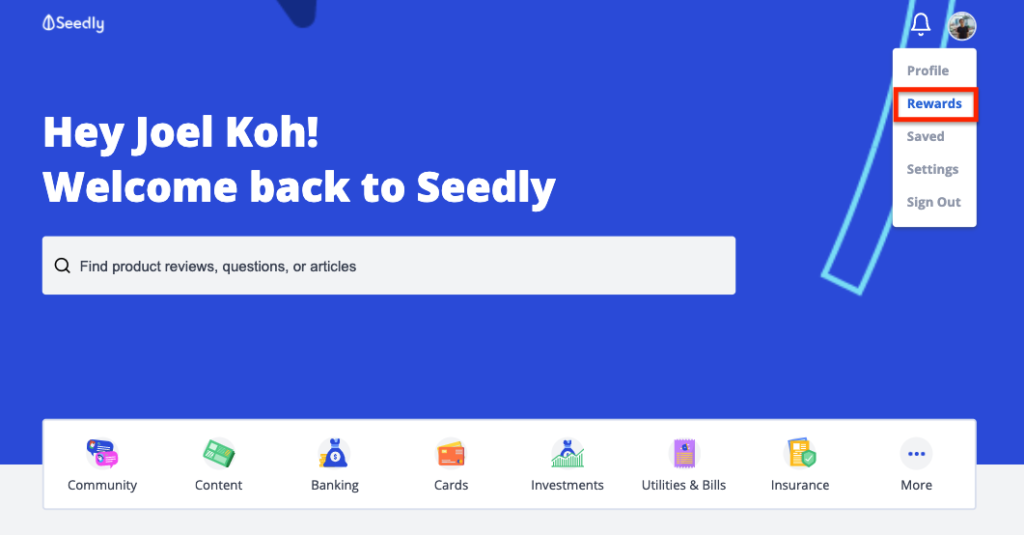