GE2020 Singapore: A First-Time Voter's Guide on How to Vote [With Seedly Comic!]
560
shares 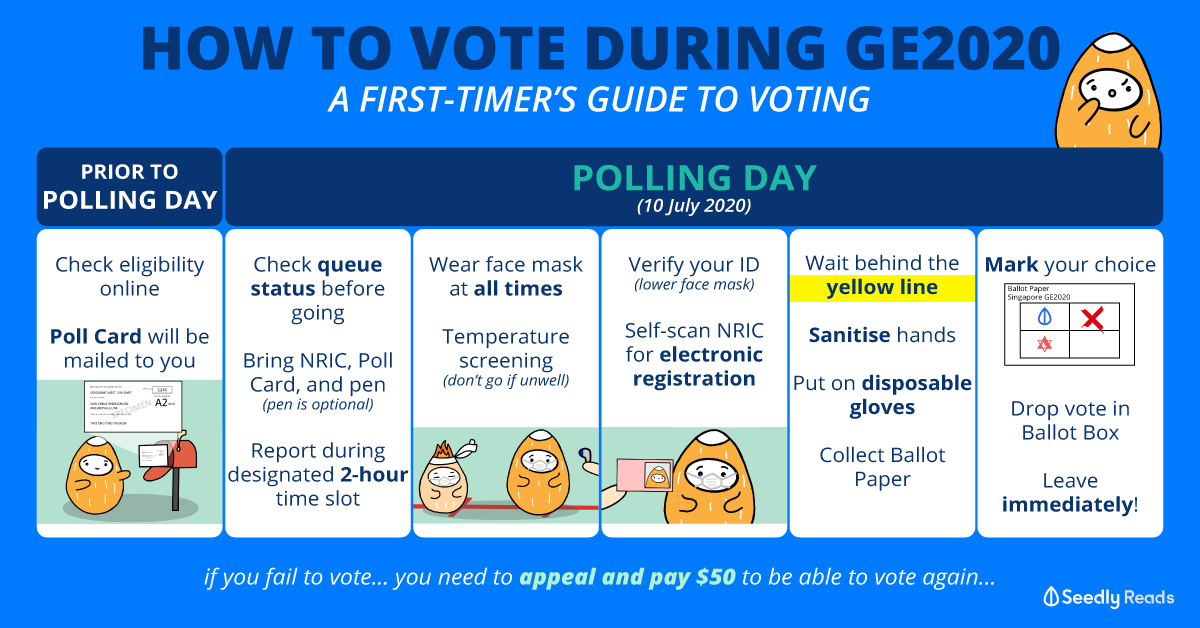 It will be a public holiday…

If this is your first time voting.

Or if you’re curious how Polling Day will be different from the others that you’ve voted at before — coz confirm have COVID-19 safety measures in place.

Then step right up. 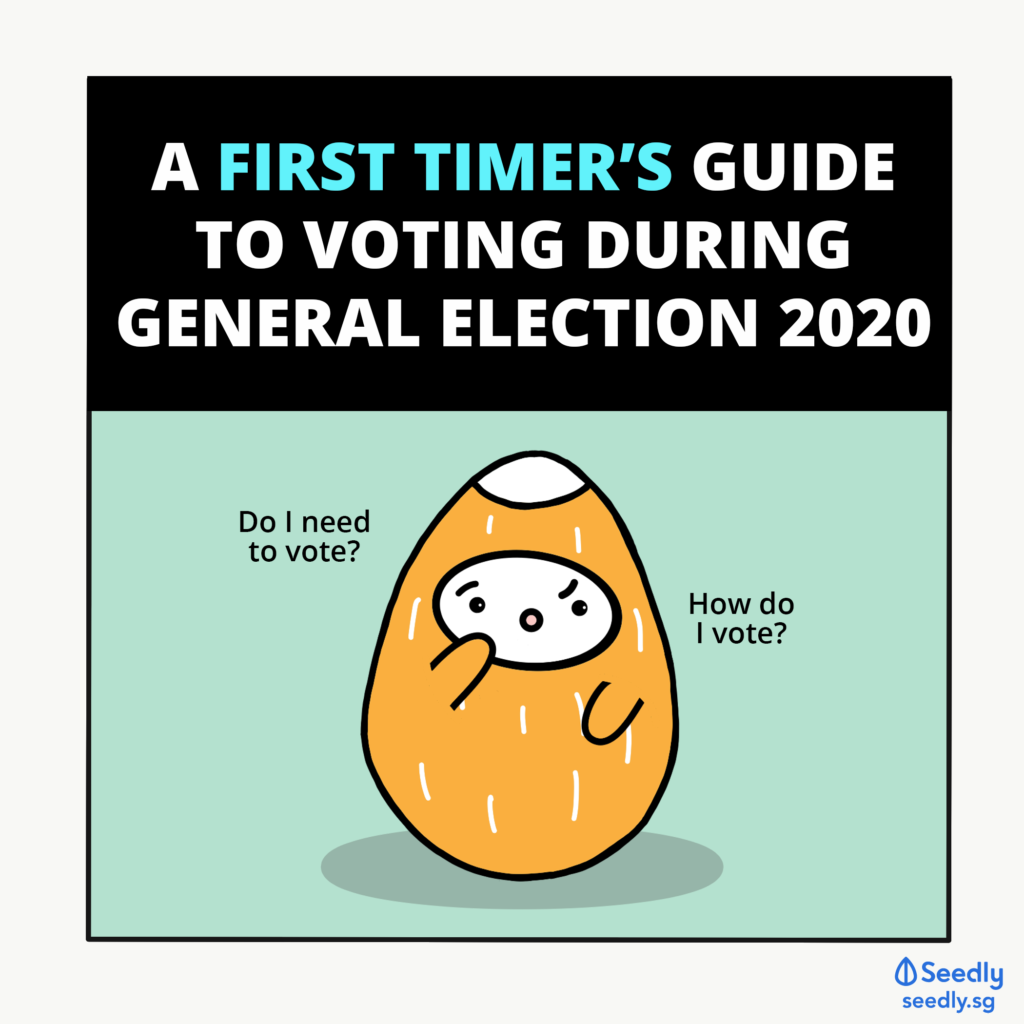 Do I Have To Vote?

Just vote already then go do whatever you want lah. 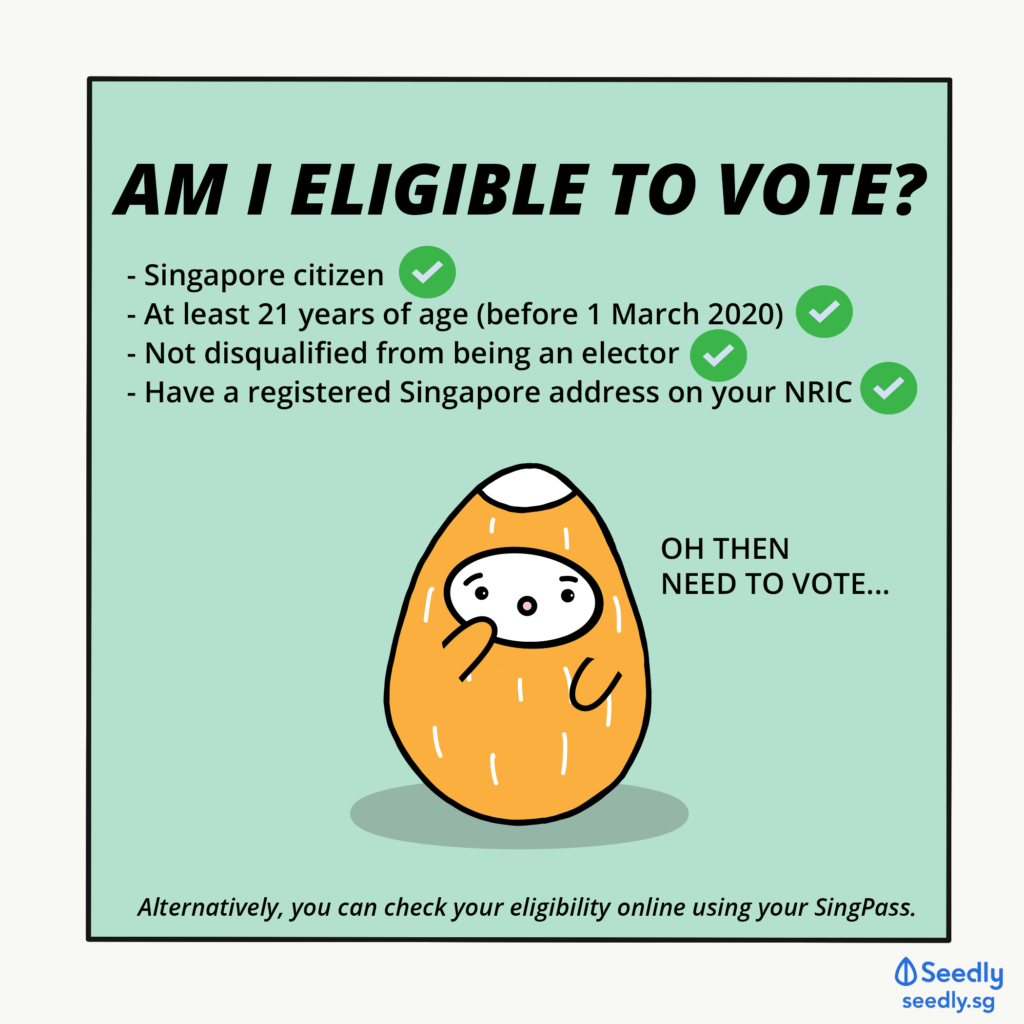 For the official criteria, you’re eligible if you:

Note: the list of voters for this GE2020 was based on the Registers of Electors prepared on 1 March 2020, hence the cut-off date

If you’re not sure and wanna check.

You can do so online at the Elections Department Singapore (ELD) website with your SingPass.

And in case you’re wondering, permanent residents are not eligible to vote.

Voting is a right that is only accorded to Singapore citizens.

What Happens If I Don’t Vote? 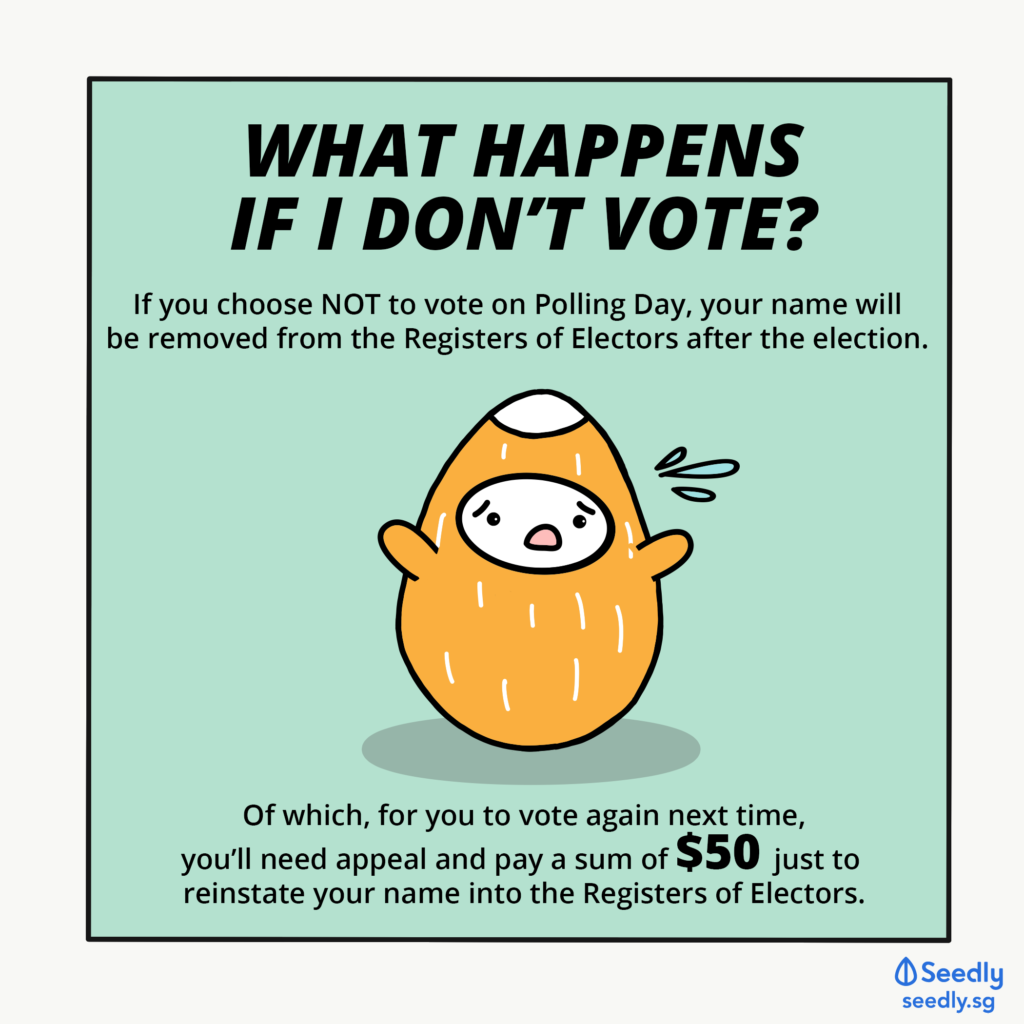 If you choose NOT to vote on Polling Day, your name will be removed from the Registers of Electors after the election.

And if you did not vote in the previous election (eg. during the 2015 Singaporean General Election) your name will also have been removed from the register.

Either way, this means that you cannot vote at the upcoming or subsequent presidential or parliamentary elections.

Now, you could have your name restored in the register…

BUT you’ll need to cough up $50 if you do not have a valid reason for not voting.

Some valid reasons for not voting include:

But personally, that $50 could be better put into Regular Shares Savings Plan or something else that’ll earn you high interest till the next general election.

As though we have places to go now in Phase 2…

It’s a huge hassle to get your name restored too.

You’ll need to submit an online appeal using your SingPass.

Or go down physically to a community centre, club, or the Elections Department to get this sorted out.

Oh, and by the way, no restorations can be made once the Writ of Election has been issued.

FYI: President Halimah Yacob issued the Writ of Election on 23 June 2020, so if you aren’t on the register by now… tough.

Here’s what to expect.

1) Prior to Polling Day 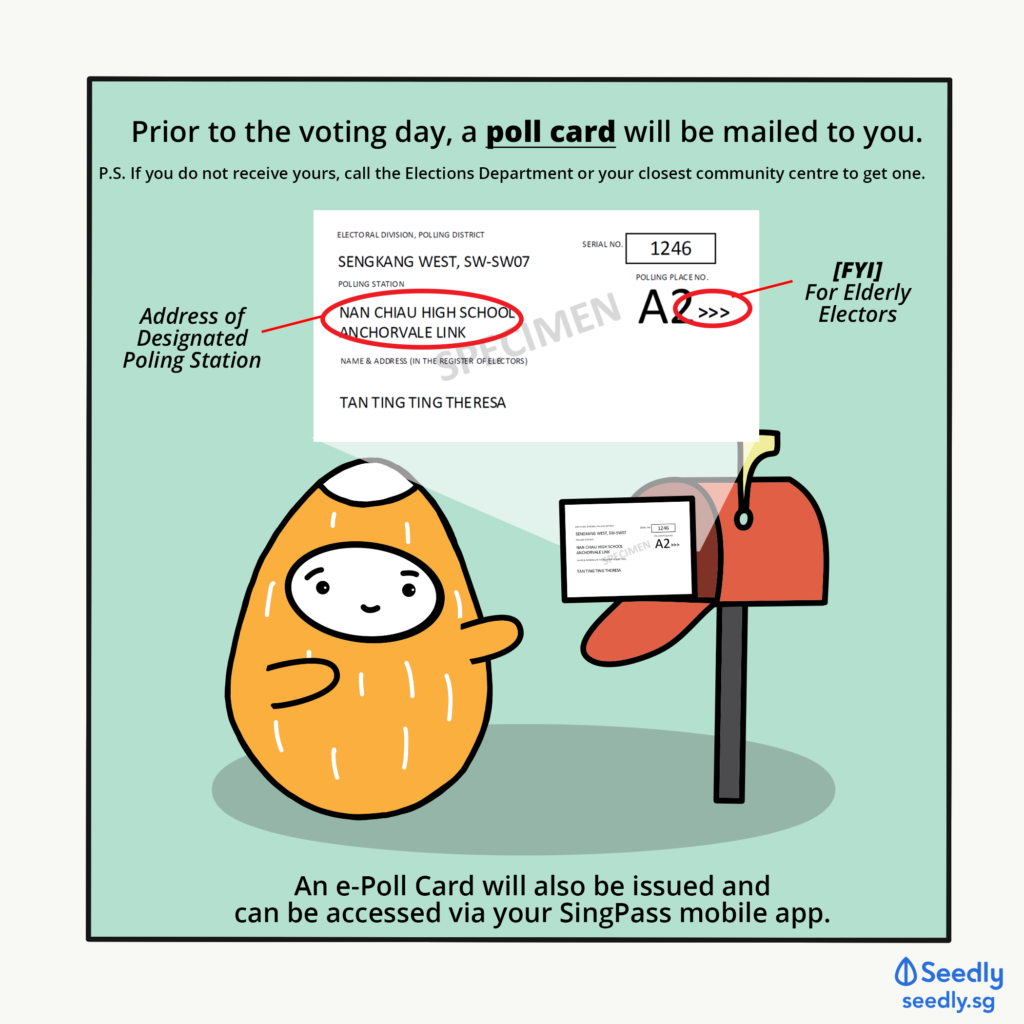 A Poll Card will be mailed to you with the address of your designated polling station.

FYI: the (“>>>”) is for elderly electors (65 years and above) and it means that they are scheduled to vote between 8am to 12pm OR can choose to go later and join the express queue.

If you do not receive your poll card, call the Elections Department or your closest community centre to get one.

For GE2020, an e-Poll Card will also be issued — this can be accessed via your SingPass mobile app.

While official polling hours are from 8am to 8pm.

You’ll also be allotted a 2-hour time-slot to prevent crowding at the polling station.

If you’ve missed your designated time-slot, you can still head down anytime between 12pm to 8pm to cast your vote. 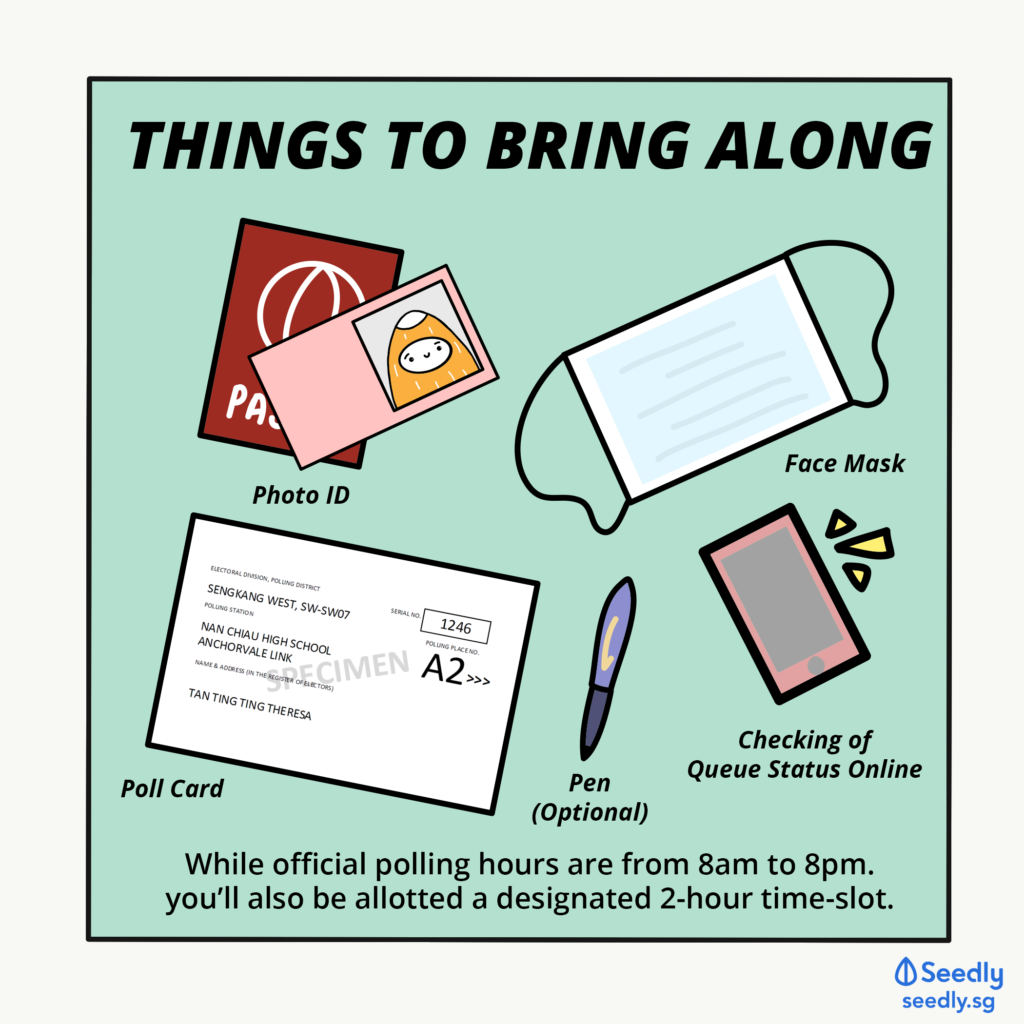 Remember to put on your face mask!

And bring along an original, official form of photo identification:

As well as your Poll Card and a pen if you’d like (more on this in a bit).

Report to the polling station during your designated time-slot. The election officials will screen for voters with temperatures above 37.5°C.

If you’re unwell and cannot vote, you do not need to produce an MC for this.

FYI: you cannot get someone to vote on your behalf, so just remember to restore your name if you’d like to vote in future elections 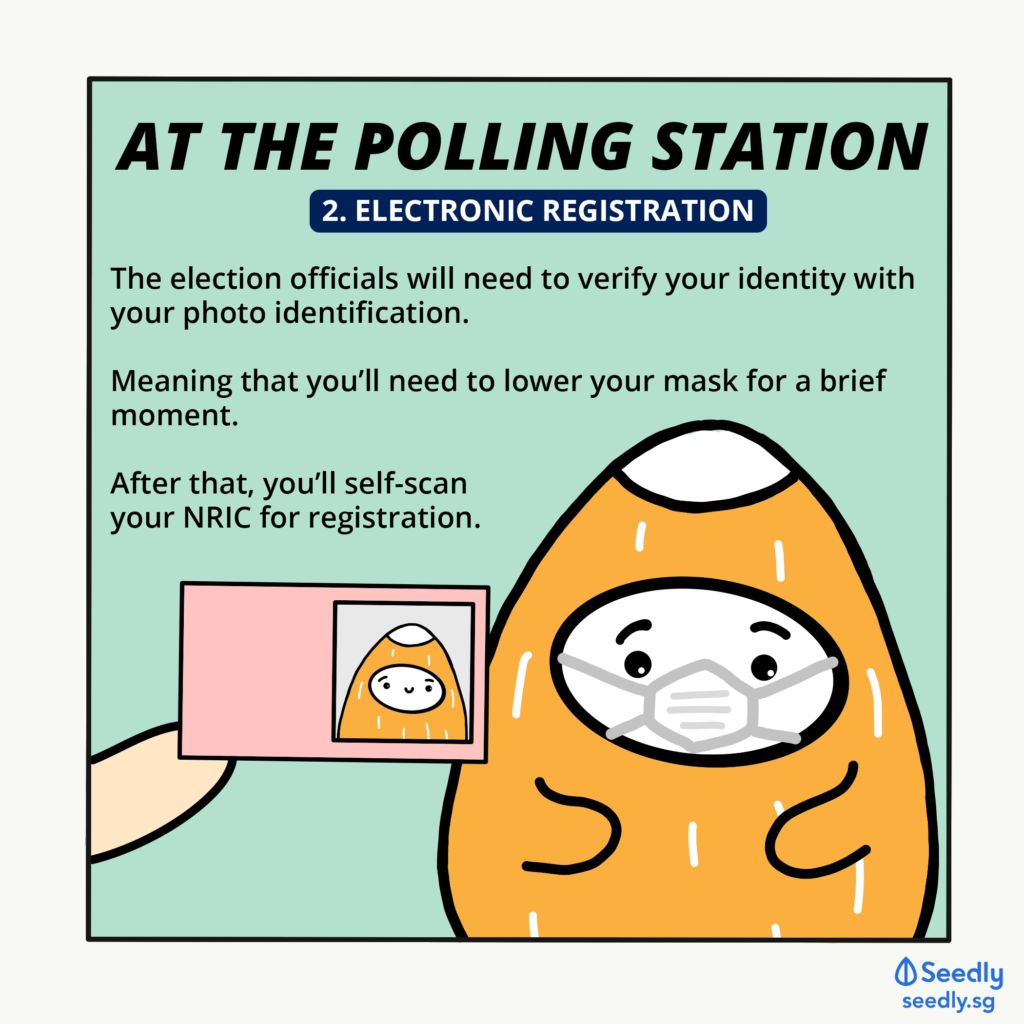 With your photo identification in hand, the election officials will need to verify your identity.

Meaning you’ll need to lower your mask for a brief moment.

After that, you’ll self-scan your NRIC for registration.

Note: as the registration system records the time you register at the polling station, you don’t need to check-in via the SafeEntry app. 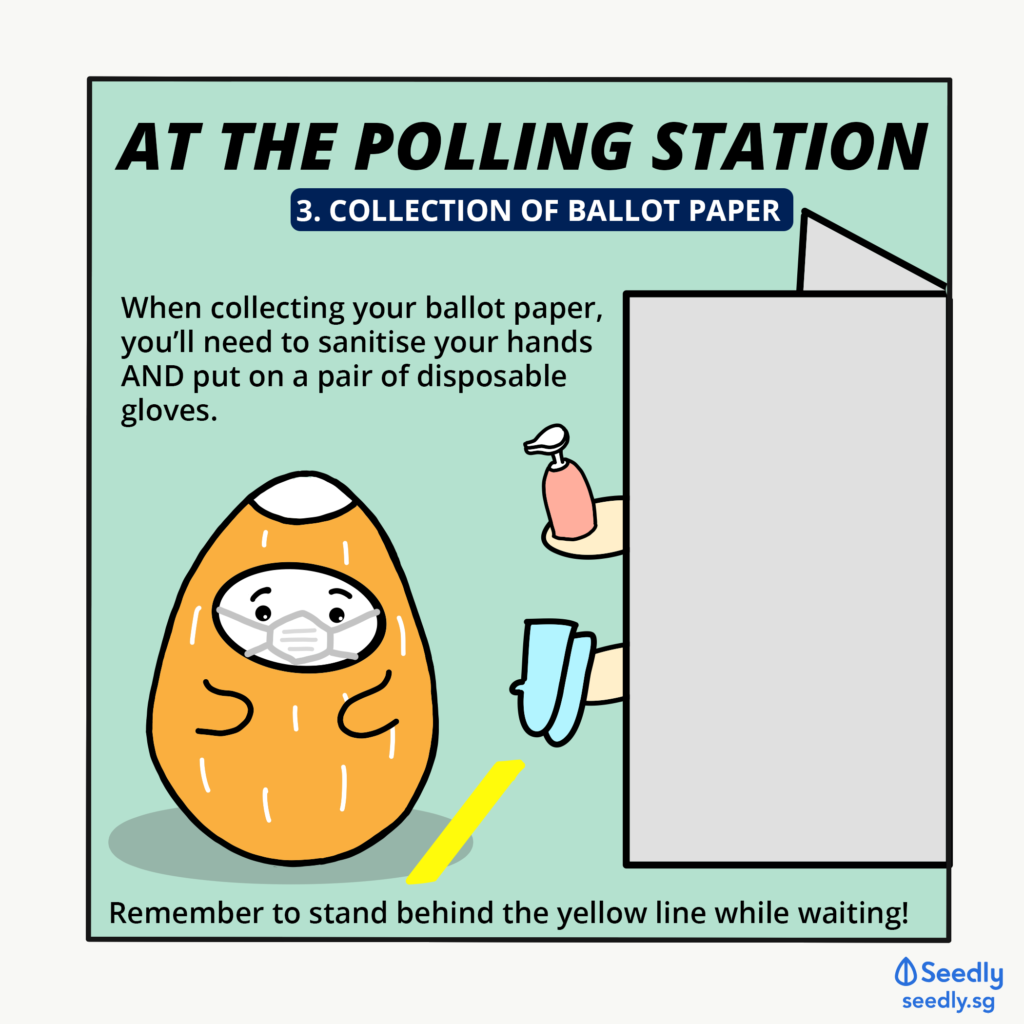 Next, you’ll leave the station and have to stand behind the yellow line while waiting to collect your ballot paper.

Once you get there, you’ll need to sanitise your hands AND put on a pair of disposable gloves.

Note: this is to minimise the risk of contaminating the pen provided at the polling booth and the ballot slips

The election official will then hand you your ballot paper. 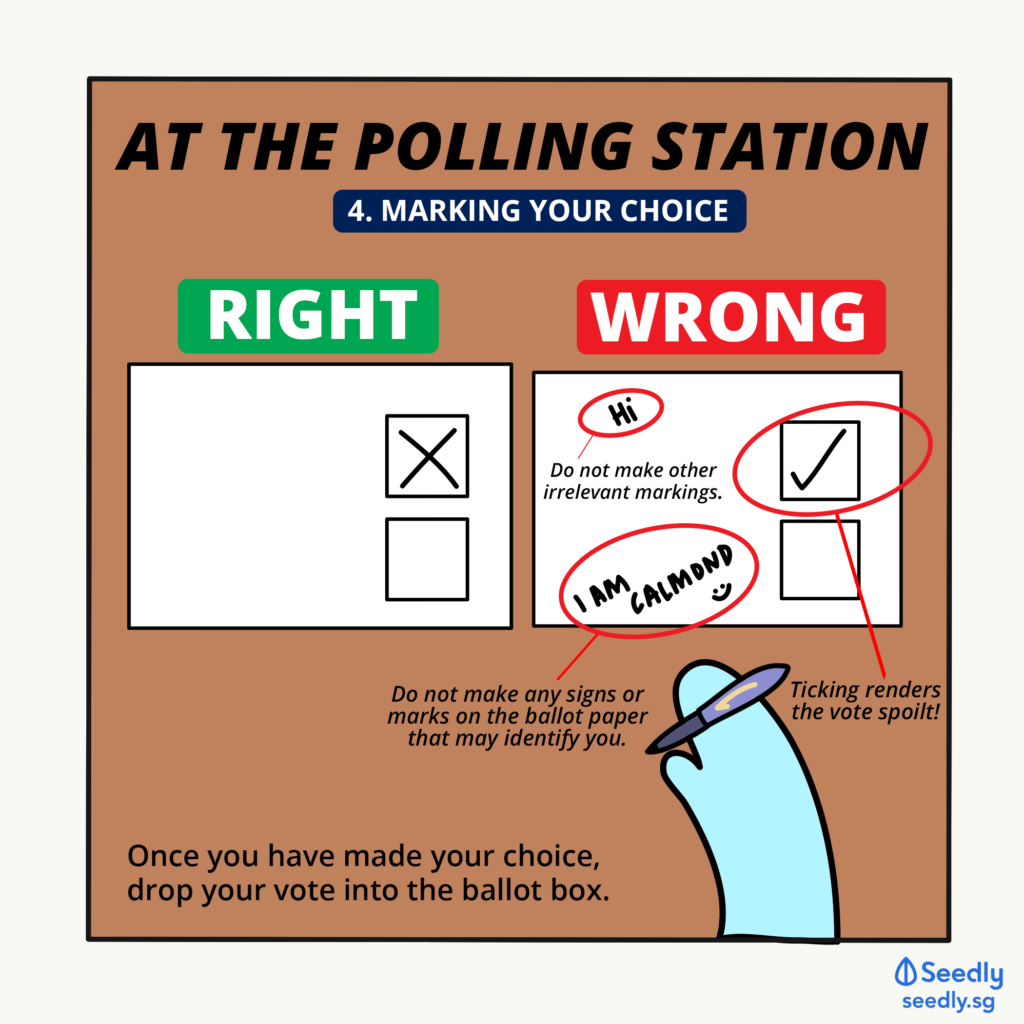 Vote by marking your choice on the ballot paper with an ‘X’ in one of the empty boxes.

FYI: drawing a tick will render your vote spoilt.

You may either use the pen provided at the polling booth.

Or use your own personal pen.

Do not make any signs or marks on the ballot paper that may identify you.

And do not show your ballot paper to anyone else.

Once done, drop your vote into the ballot box. 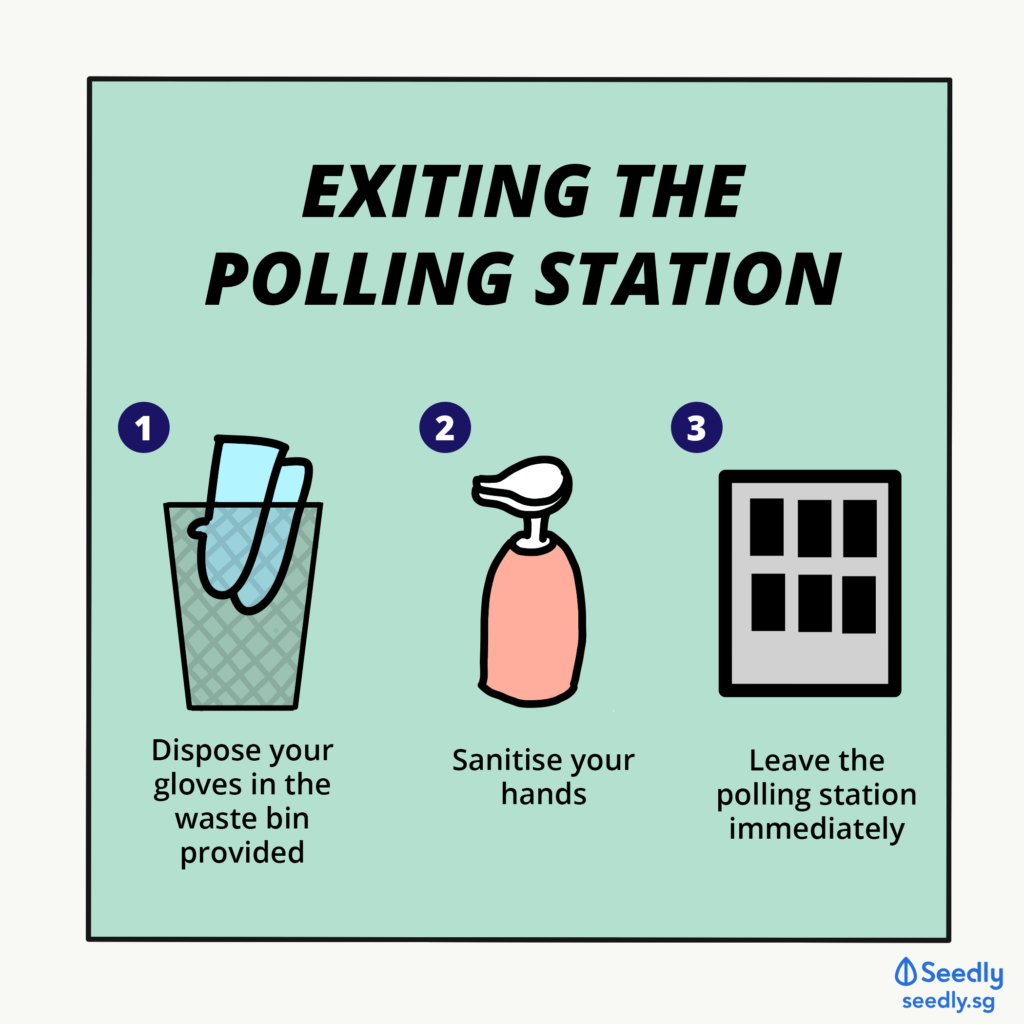 Dispose of your gloves in the waste bin.

And leave the polling station immediately.

How Long Will The Entire Process Take?

Even with the safety measures in place.

ELD estimates that the total time spent by a voter — including registering, sanitising, and voting — will take about 5 minutes.

What If I’m Serving My Stay-Home Notice?

A polling station — that is away from other voters — will be set up for you to use.