How Do Visa And Mastercard Make Money?
178
shares 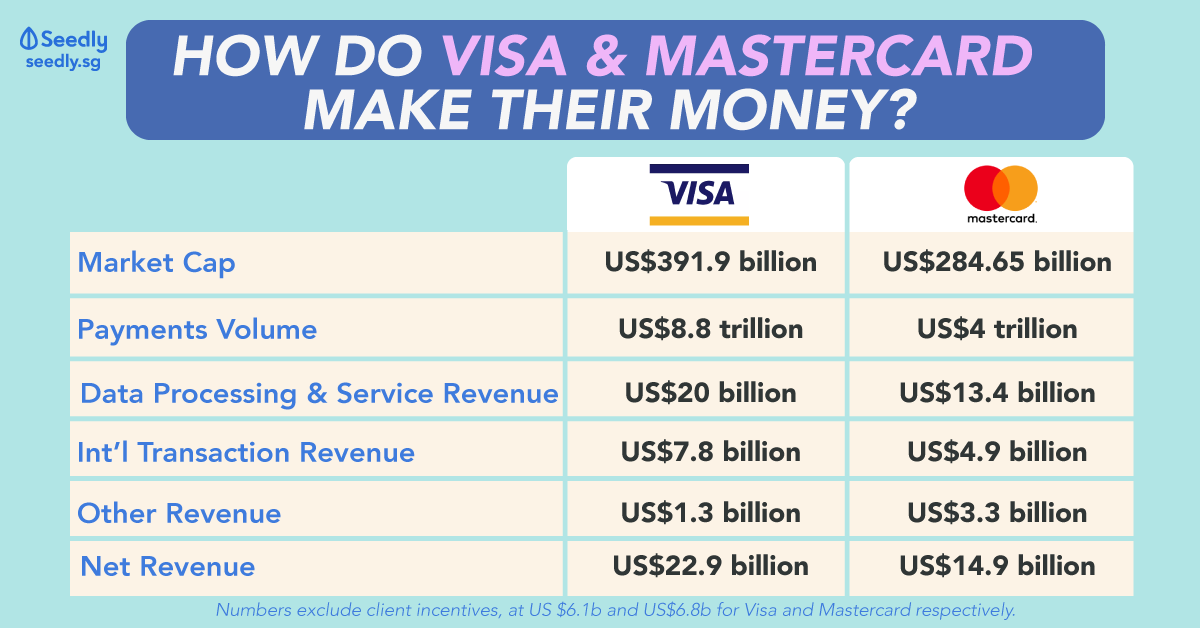 Did you know Visa and Mastercard don’t issue debit or credit cards?

The multibillion-dollar companies are in fact digital payment intermediaries that process global transactions while ensuring our information remains secure.

It seems almost obvious – except I’d never paid it much thought prior to covering the multi-currency wars.

Sure, challenger banks like Revolut and YouTrip have shaken up the game with greater transparency and by cutting out hidden fees – but their physical cards, too, are powered by Visa and Mastercard respectively.

All the bells and whistles – rewards, cashback and dreaded interest rates – are offered by the issuing financial institutions, and not Visa or Mastercard.

TL;DR: Why Visa And Mastercard Are Rollin’ In Cash

Before delving into how the digital payment giants make their money, though, here’s an overview of the numbers behind Visa’s and Mastercard’s success.

That’s a lot of numbers, so let’s break things down in slightly technical terms. Visa and Mastercard run on a payment model that involves the following parties:

Let’s assume Brenda (the consumer) wants body moisturiser from beauty chain Sephora (the merchant). For this, she opts to pay with her Visa-powered DBS debit card. In this case, DBS is the card-issuer, and Visa the intermediary.

Sephora sends Brenda’s account information over a secure network to its bank (the acquirer), Amex – which then requests permission from Visa to transact with Brenda’s DBS card.

Upon DBS’ authorisation, the transaction is made and response issued to Sephora. Of course, all of this happens at light speed thanks to Visa’s ultra-fast and secure payment network.

In simpler terms, without digital payment middlemen like Visa and Mastercard, we’d probably be at far higher risk of fraud.

But here’s where things get interesting: Visa and Mastercard don’t profit directly from Sephora’s sale of lipstick to Brenda.

And that applies to every purchase made, really.

For instance, card issuers like Amex, DBS and OCBC earn the full sum of interest on credit card purchases.

So, nope – your money sits with neither Visa nor Mastercard, since they’re merely middlemen that aren’t capable of loaning money. That altogether eliminates the companies’ default risk, meaning Visa and Mastercard enjoy higher overall valuation than, say, American Express.

(At time of writing, Visa’s market capitalisation stood at almost US$392 billion – and Mastercard’s at $284.7 billion.*)

Which brings us to:

The Profit Drivers Behind Visa And Mastercard’s Success

There’re three ways in which fees are collected – service revenue, data processing revenue and international transaction revenue – and they form the pillars of both companies’ success.

Service revenue is pegged to something called payment volume – meaning that more a product costs, the more Mastercard or Visa earn, albeit in small amounts.

It sounds nanoscopic at best, but every bit really does count.

In the fiscal year ended 30 Sep 2019, Visa processed US$8.8 trillion in transactions; Mastercard, meantime, processed around US$4 trillion for the year ended 2018.

Then there’s the fact that both companies will never be impacted negatively by inflation.

It isn’t that they’re resistant to inflation; rather, inflation only boosts their growth.

So if a kitchen mixer that cost $300 is now $500 as a result of consumer inflation, Visa and Mastercard earn more off it than before.

Data processing revenue refers to the fees collected based on the number of transactions made, rather than the value of each transaction.

These transactions could include transferring money to another bank account (think PayNow, or Mastercard’s own Mastercard Send), or approving a purchase between consumer and merchant – as in the case of Brenda successfully purchasing lipstick from Sephora.

At every step of the process, both companies collect a small fee – from authorising a transaction or transmitting transaction information between the issuer (e.g. Brenda’s bank-issued card) and acquirer (e.g. Sephora’s bank).

It’s only fair, given card-issuing entities are using these digital payment intermediaries’ brand and services.

We mentioned earlier Visa and Mastercard are resistant to inflation.

The irony, though, is the averse impact that a recession or a large-scale terrorist attack – anything that’d affect the global economy, really – would have on the digital payment giants.

To put things into perspective, these amounts made up roughly one-third of both companies’ revenue. It’s clear the two companies rely heavily on tourism to boost their cross-border and currency conversion revenue.

Sure, the likes of new-fangled multi-currency cards have eradicated needless conversion fees while youre on holiday, but they’re still powered by Visa and Mastercard.

The Future Of Visa And Mastercard

I’ve rambled a fair bit now – hey, education takes time – but is either company attempting to innovate, and how?

Expanding into untapped or underdeveloped markets is an avenue Mastercard’s begun exploring; many parts of Africa and India, for instance, don’t yet offer electronic modes of payment.

Naturally, (my guess is) the move would begin in tourist-heavy spots, given the sizeable revenue Mastercard generates from overseas transactions.

Then there’s Visa, whose country-specific plans to strengthen payment security are detailed in the so-called Future of Security Roadmap.

Among its initiatives are to devalue data by i) rendering stolen account details useless, and ii) better protecting personal data, such as bank account details.

Tokenisation sounds like a bit of a confuzzling term, but it simply means that your account information – like your 16-digit account number – is replaced with a digital identifier. How’s that for a neat way of reducing the risk of fraud?

How do you think the future of digital payments will evolve? Tell us on our Seedly Personal Finance Facebook Community page!