According to the latest We Are Social Digital 2020 Singapore Report, Facebook-owned WhatsApp is the most popular messaging app in Singapore as it has the most monthly active users throughout 2019.

You might have also heard the news that WhatsApp has issued an ultimatum to users outside Europe and the UK: either agree to share your data with Facebook Inc (NASDAQ: FB) as detailed in their new terms of service or risk losing access to WhatsApp.

The messaging app has been sending a pop-up notice to its users, warning that they will “need to accept these updates to continue using WhatsApp” by 8 Feb 2021 – or delete their accounts.

This move by WhatsApp has raised a series of concerns about user privacy, what Facebook plans to do with the data from WhatsApp and how it may benefit Facebook financially or otherwise.

Should you be concerned about these developments?

TL;DR: WhatsApp Privacy Concerns And Why You Should Care 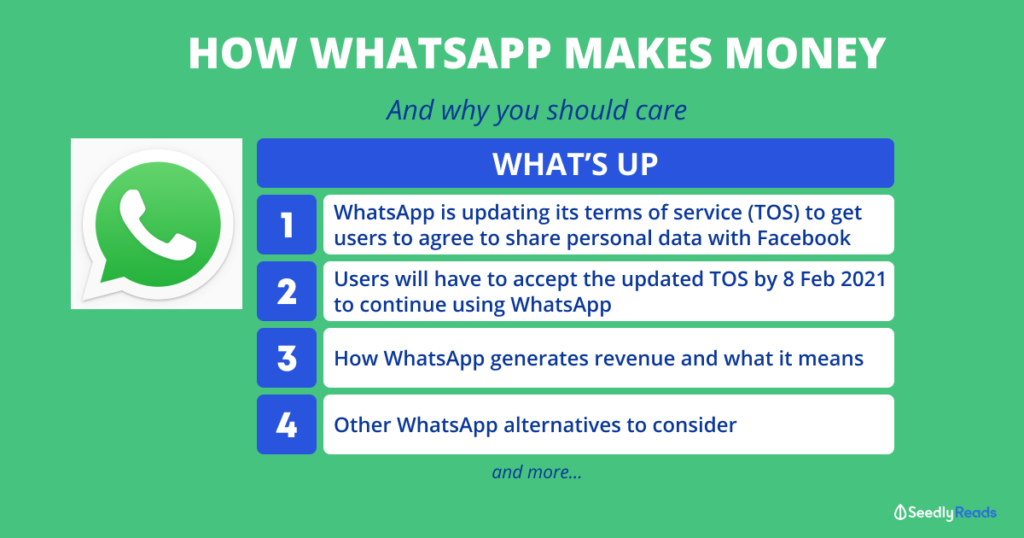 However, there is one massive difference.

For last year’s update, the company gave its users the choice to opt-out and “not have your WhatsApp account information shared with Facebook.”

This means that if chose to opt-out, your WhatsApp account data is currently NOT being shared with Facebook.

But what data is being shared you might ask?

Well according to the company’s FAQ page, here is the extent of the user information WhatsApp shares with other Facebook companies:

However, Will Cathcart, head of Whatsapp, has shared his thoughts on the matter via Twitter.

On a superficial level, this should not be too concerning as the sacred cow of the content of user conversations remains untouched due to the company’s commitment to end to end encryption (E2EE) in the app.

In other words, no one, including WhatsApp, knows what users are saying to each other, nor can they easily find out.

Based on the above information, you should not be too worried about using WhatsApp for now.

But for the longer term, the answer is more complex and has to be understood by how WhatsApp makes its money.

How Does WhatsApp Make Money?

In the early 2010s, WhatsApp experimented with a subscription model.

However, this experiment was short-lived as WhatsApp announced on Jan 2016 that it will no longer charge subscription fees for WhatsApp; citing that this strategy might not ‘generate meaningful revenue in the long term.’

In 2017, WhatsApp Business was launched in the UK, Indonesia, Italy, Mexico, and the US.

The following year, WhatsApp launched the WhatsApp Business API. The service operates on a freemium model that allows companies to contact its customers, provided the customer contacts the business first.

If a company replies within 24 hours from the last message, they will not be charged. But, if they reply after that they will be charged at a fixed rate per message.

The company also launched the catalogue function for WhatsApp Businesses as well as WhatsApp Pay in India and Brazil in 2020.

As Facebook does not reveal revenue breakdowns by company, WhatsApp’s financials are not public.

However, Forbes speculates that potential revenue would range from $5 billion to $15 billion in the years ahead, with average revenue per user (ARPU) ranging from $4 to $12.

Also, WhatsApp announced in mid-February 2020 in a blog post that the messaging app is now actively used by over 2 billion people worldwide.

You do the math.

How Does WhatsApp Plan to Make More Money?

Apparently, this is nowhere near enough revenue for Facebook and its broader goal to integrate the backends of WhatsApp, Messenger, and Instagram.

As such, WhatsApp seems to be stepping up its efforts to better monetise its users.

Even though your messages are secure (at a level of encryption is allowed by governments worldwide) for now, your data is up for grabs.

To improve the revenue of its commercial offerings, the company might be tempted to further monetise your data.

Thus, this move could be constructed as the company using your data and engagement with WhatsApp to enable shopping and other business services to create a platform where WhatsApp can charge businesses to contact you and sell to you.

These labels tell you how iOS apps use your data and is classified under three categories:

I would like to highlight the ‘data linked to you’ category which refers to any data collected that can be used to identify you.

This is data collected from using the app, having an account with the service or platform, and/or any data extracted from your device that could potentially be used to create a personalised advertising profile.

*Do note that the only personal data that Signal collects is your phone number and it does not link that to your identity.

No matter your views on the upcoming change to WhatsApp, it will be likely that further changes will be made in the future

I am reminded of this quote:

And since users of WhatsApp are not paying customers, I would think that Facebook and WhatsApp’s priority will be to monetise the app and make use of all avenues (including user data) to generate revenue.

But, if you would like to move away from WhatsApp, here are some alternatives.

Here is a quick comparison of WhatsApp, Signal and Telegram from the Indian Express: 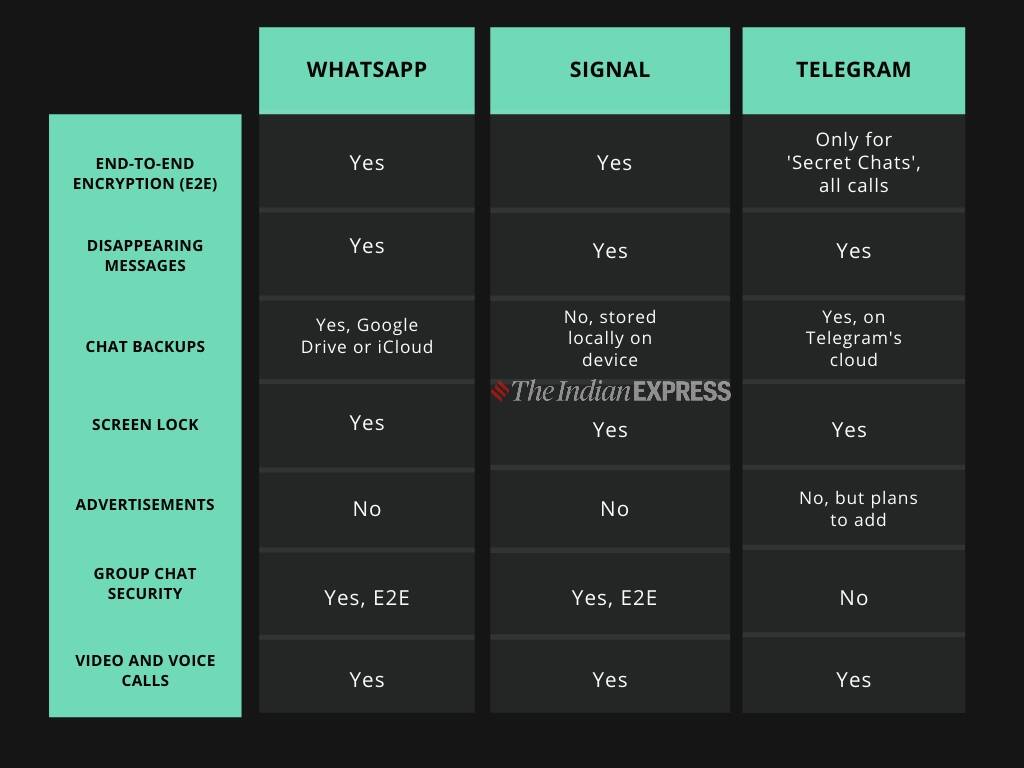 Although Telegram is privacy-focused as seen with its privacy label, its security is not as airtight as WhatsApp or Signal as it uses server-client encryption instead of E2EE for its normal chats.

Generally, E2EE is better for privacy and security as, during the message sending process, the server which sends the encrypted data between one “end” and the other “end” in the conversation is unable to decrypt and read the data it transfers.

For telegram chat, its server-client encryption which means that the data is encrypted by the server then sent out to the party based on their cypher unique to their id.

In response to this encryption issue, Telegram CEO Pavel Durov stated that:

“We rely on our own distributed cross-jurisdictional encrypted cloud storage which we believe is much more protected, compared to say Apple or Google.”

But, if you want E2EE, you will need to create a Secret Chat on Telegram. This Secret Chat is also designed for privacy as it is not stored on Telegram’s services and will disappear after a period of time.

The app is available on Android, iOS, Mac and Windows.

As the app runs its own cloud backup, all your chat data is retained even if you set up the app on a different device. 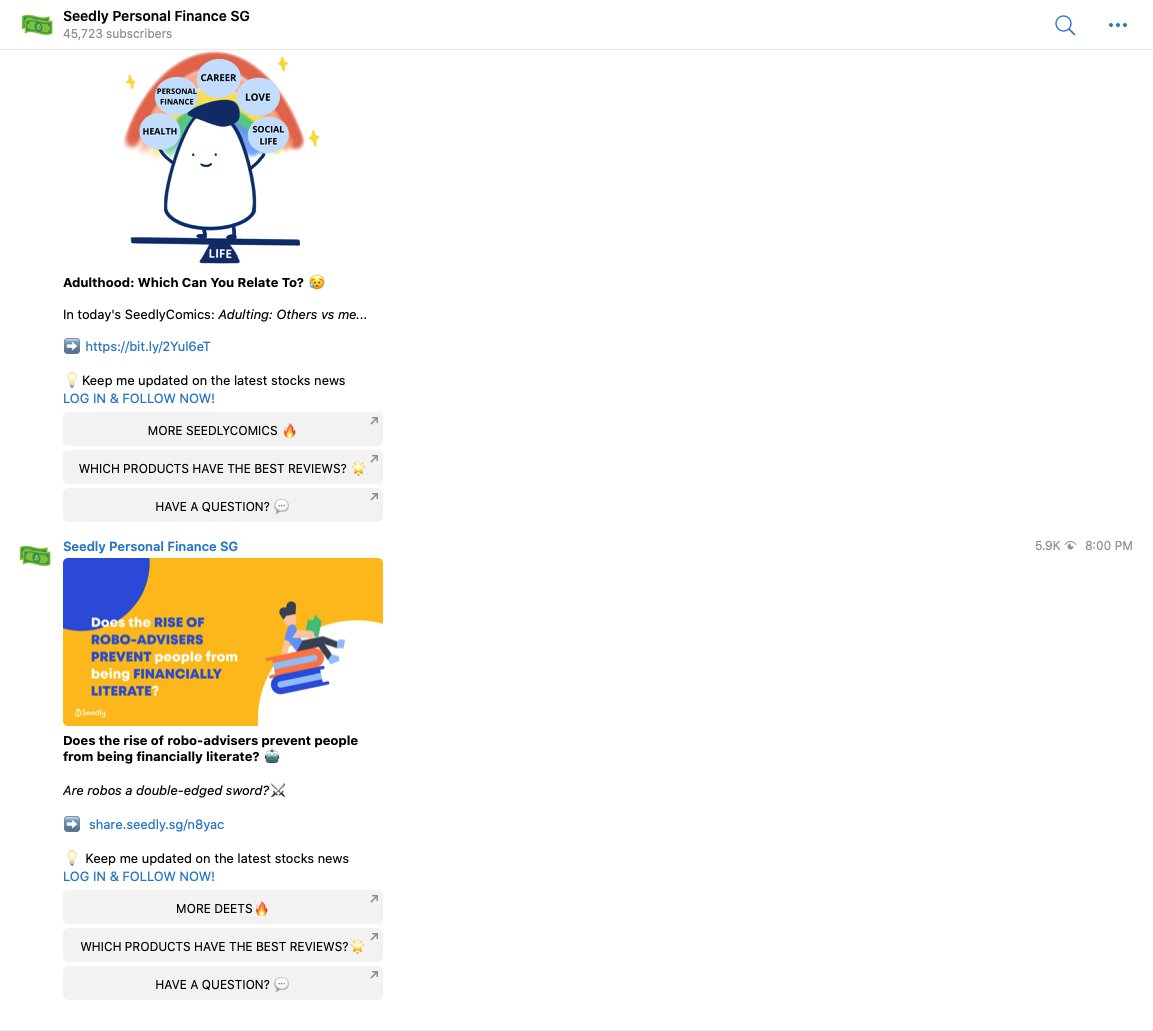 FYI: We have a telegram channel. Follow us on Telegram, to keep up with the fun on Personal Finance!

How Telegram Plans to Monetise

In Dec 2020, Telegram co-founder Pavel Durov announced the company’s plan to monetise on his telegram channel.

The plan has two main parts:

First, Telegram will launch new premium features for its enterprise and power users.

But, all current features of Telegram will be free to use.

This means that the paid features will be optional.

Second, the company will launch ads within the app’s public channels.

These channels will start displaying ads via the company’s ad network and will be visually different from regular posts.

Signal is a simple free app that is available on all major platforms, counting Tesla CEO Elon Musk as one of its supporters.

The app has E2EE for all chats built by American cryptographer, security researcher and the co-founder and CEO of Signal, Moxie Marlinspike.

This E2EE ensures that no third-party or even Signal can read your messages.

But unlike WhatsApp and Telegram, Signal uses open-source encryption, which means security developers can test it for flaws and find bugs.

Although it does not have as many features as WhatsApp and Telegram, Singal is arguably the most secure and collects the least data.

Also, the app does not support third-party backups which means your data is secured and stored locally on your device. But, if you lose your device, your previous chat history will be lost too.

Yes, the private messaging app can be used across platforms from Android, iOS, iPad, Mac, Windows and Linux as well.

How Signal Plans to Monetise

This reassuring thing about Signal is that the company behind it the Singal Foundation: a non-profit founded in Feb 2018 by Moxie Marlinspike and WhatsApp co-founder Brian Acton

The foundation was started with an initial US$50 million loan from Acton after he left Facebook in Sep 2017.

Towards the end of 2018, the loan amount had increased to about US$105 million.