The 'Wealth Coaching Guru' Bingo: Common Tactics Used to Lure You In
488
shares 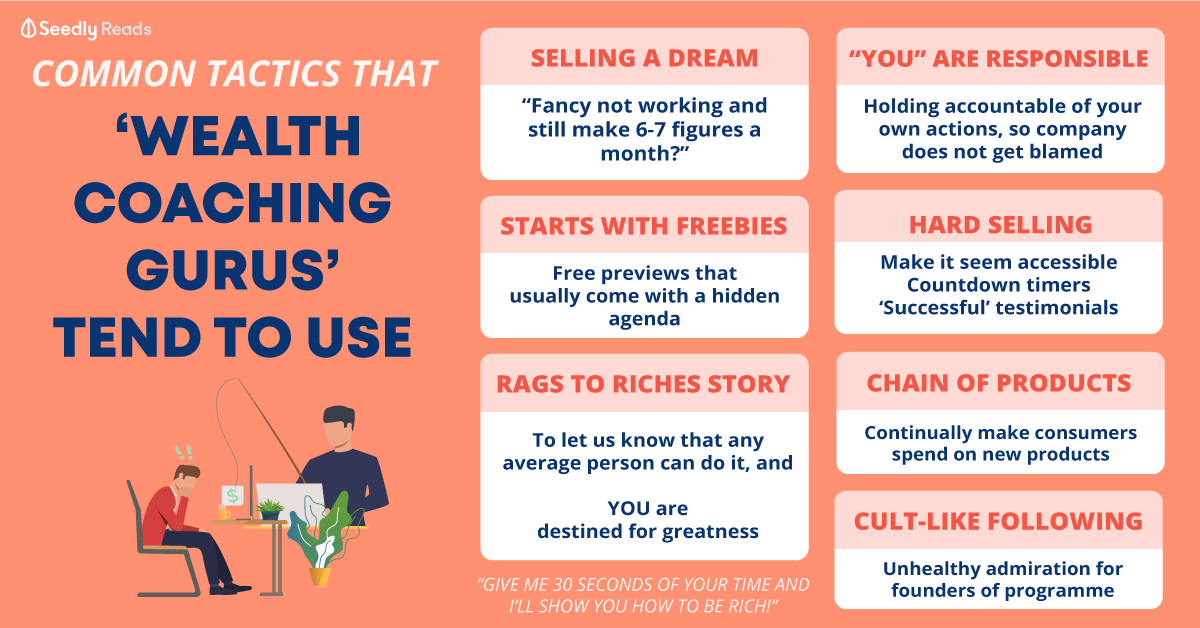 The 'Wealth Coaching Guru' Bingo: Common Tactics Used to Lure You In

During this period of financial uncertainty, I’ve been looking for ways to save more money.

To do that, I’ve turned to the encyclopedia of our times – YouTube.

While surfing my favourite personal finance channels, I’m often interrupted by ads featuring someone telling me that I can quit my job today, live my dreams and earn $XX,XXX in a week.

Feeling partly intrigued, annoyed and also amused, I decided to take a deeper look into these ‘internet marketing gurus’.

I found that there were jarringly similar traits amongst these ‘experts’.

So if you’re also one who has had your videos interrupted by a:

“Just give me 30 seconds of your time, and I’ll show you the best way to become rich!”

Here are some of the common tactics used by these businesses to lure individuals with lofty dreams.

Disclaimer: We are not sh*tting on online education. Online education has allowed us to access knowledge at the tip of our fingers. We, however, are not fans of this method of marketing, with these ‘gurus’ shelving out psychological tactics to lure people in, and making money off people’s naivety.

With this, we are hoping to raise awareness and also remind people to do their due diligence before signing up for any expensive courses.

If you’ve come across a business promoting their ideas and courses using these steps below, you’ve completed the ‘Wealth Coaching Guru’ bingo, which also means:

These ‘gurus’ often sell a dream.

They would find something that targets our insecurities and dreams, letting us know that it is possible to break out of what we currently do not enjoy.

You can quit it immediately!

Wanna make 6-7 figures a month, just by sitting at home?

You can do it!

This is no longer impossible!

They would usually target people who would love to break out of their usual jobs.

It usually comes with promises of being able to earn a living without ‘working a job’.

By selling a dream, they can attract individuals who would wish to take charge of their own lives, and leave the conventional way of living.

One of the first things that would be offered during their introductory video would be the promise of something free.

It could be a free training, a free live event, or free webinar.

The agenda of this freebie is the first step of hooking new customers in.

To a regular person, signing up for something free has no implications.

Well, it might seem harmless to us, but is something essential for them to bait us in.

Once you’re enrolled in their free preview, they start to throw in more tactics to hook you further in.

Some of this include flashing ‘testimonials’ of ‘regular folks’ like you and me, showing what they have successfully achieved in this course thus far.

If it’s a webinar, a common tactic used is to hold a lengthy one.

By keeping it lengthy, it gives time for viewers to build their trust towards these presenters.

Also, they might ask you put your phones away for the next hour because they want your full, undivided attention.

These webinars usually don’t exactly add value, but would serve as an introduction to how great they really are.

They would usually include words such as ‘bootcamp’ or ‘shortcut to success’.

If you’re itching to find out more, you can only do so by subscribing to their programme.

3) Telling You Their Rags to Riches Story

One crucial part of this whole system is them telling you their rags to riches story.

Letting you know that they are also average people, who started off with nothing special.

Why are they doing this?

This is to let you know that they are just like you, and they were able to succeed.

They were also once office desk haters, and were desperate to leave these jobs behind.

They were also from families that were not well-to-do, with humble backgrounds and no silver spoons in their mouths.

They made it on their own.

And you being just like them, most definitely can do it too!

THat YOU are destined for greatness.

Sadly, this is just part of their trick to rewire your mindset.

Being suckered into such a thought process makes it more likely for you to think that this course that they are selling (at the end of their webinar) would get you there.

4) Telling You That YOU Are the One Responsible

To make sure that you are responsible for your own decisions, these ‘gurus’ would mention that:

“This is only for people who are dedicated and focused.”

While being responsible for your own career and actions is a good thing to do, this point is usually emphasised here for a different reason.

One reason is that these businesses hope that you would hold yourself accountable for the things that you do, after embarking on their courses.

This includes shoving the finger at your boss before leaving your day job, to focus on your new ‘business’.

This is because by being responsible for your own actions, you would take it as your own fault if this business idea of yours eventually falls through.

You might not have slogged hard enough to be successful (yet).

That you chose to quit your job yourself.

(Even if it was something that has been preached over and over again during their talks.)

During the hard-selling portion, a number of tactics start to roll in.

I mean, it’s understandable because that’s the beginning of everything for these businesses.

During this segment, they might start to share the testimonials of past clients once again, showcasing their successes after joining the program.

“I didn’t have to think about returning to my office job anymore!”

To make sure that this business decision is non-intimidating, some of these courses promise that you don’t need to have existing skill sets to be successful.

You don’t need to be a tech expert.

You don’t need a huge budget.

You don’t need to know how to do sales.

It might also be positioned as a ‘not-a-get-rich-quick‘ scheme.

Perhaps to make it more believable.

And also to dissociate themselves from the usual bad impression we have for ‘get-rich-quick’ schemes.

Which is funny because it’s exactly what they are promising too, an easy method to… get rich.

As part of their selling process, a countdown timer will be parked on the product site.

This gives the consumers a sense of urgency.

That if you were to spend time thinking about it, you’ll miss out on it.

If you wanna be part of the exclusive group, you got to join NOW.

6) Creating a Chain of Paid Products

Think it stops at just one product?

Such internet marketing courses are packaged such that in order to get more, you gotta pay more.

While you’re enrolled in your current course, it would end with the promotion of another better, upgraded course.

This might come in forms of added bonuses for signing up for another upgraded programme.

Or monthly subscriptions to get included in the inner circle.

Leveling up through the different tiers of these courses would provide you opportunities to and attend coveted black-tie events, and mingle with the ‘big names’ of the industry.

By creating a chain of paid products, their goal is to keep you hooked on their products.

It reprogrammes your mind such that it makes you keep wanting more, and always thinking that you need the next thing.

7) Having a Cult-Like Following

Live events are a huge part of these businesses.

By holding these events, course participants are now able to congregate and get all pumped up together.

With everyone sharing similar goals and ideals, it creates an atmosphere of exclusivity too.

Some of these events are positioned as black tie events, where individuals would don on suits and gowns – making it seem like everyone’s already successful.

What disturbs me the most is the cult-like admiration these participants have for the founders of such programmes.

To me, it’s a very telling sign if people start to blankly worshipping these ‘gurus’.

Came across this video of a past participant of such a programme mentioning that these ‘gurus’ would even pose questions like:

And would be met with a resounding ‘yes’.

But If It’s So Bad, Why Has Nobody Said Anything?

According to past participants, this is where your psychology is used against you.

As they are taught to be completely responsible for their own actions, many would be too ashamed to admit that they are not doing well in the programme.

Having built a community (which they would usually like to affectionately call each other ‘brothers’ and ‘sisters’), leaving such a programme also meant betrayal, or turning back against your own ‘entrepreneurial family’.

Also, it is common for people who have differing opinions of such programmes to be kicked out by the community.

In short, they are labelled as the ‘bad apples’.

All in all, it seems like peer pressure and shame are common factors that prevent people from leaving this spiral into darkness.

The reason why such businesses are still running today is because they know the way to people’s hearts and insecurities.

However, more often than not, these marketing gimmicks might paint too pretty a picture, while keeping some information hidden beneath the surface.

Besides that, there are so many resources out there, with some that might provide similar value at a lower cost.

So the next time you’re being sold a course, question its value and do your own due diligence.

Check whether you are able to find something similar online, at a lower cost.

If you need help in discerning information online, our SeedlyCommunity might be able to help you with that too!