Interview Preparations: The Hows, The Whys, The Whats
63
shares 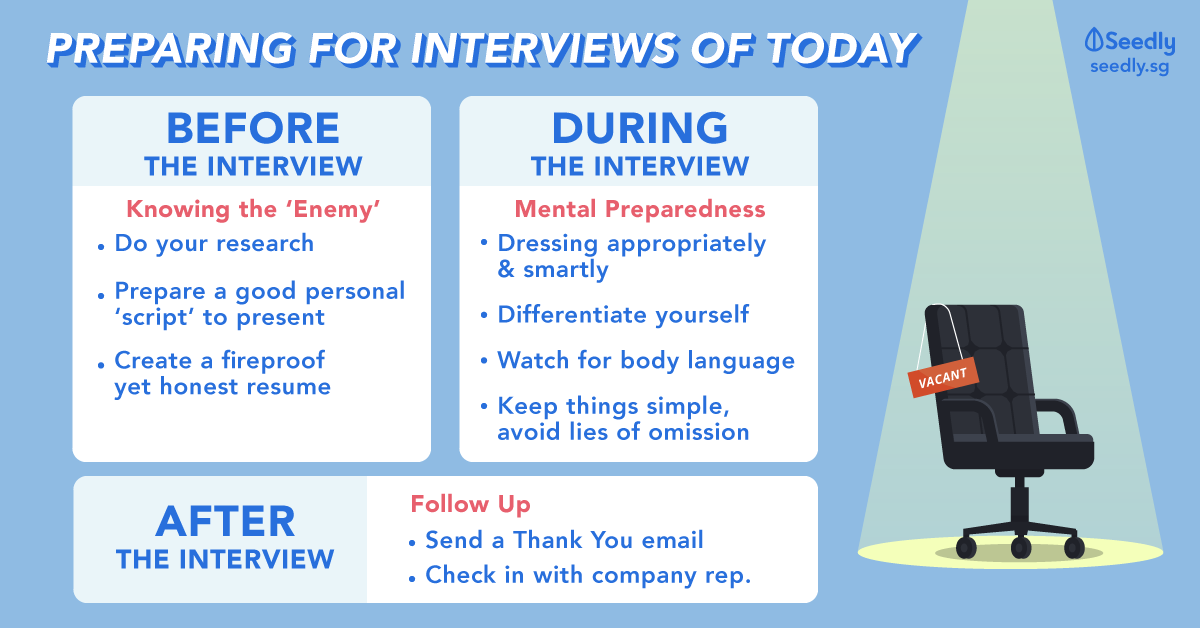 When it comes to interviews, no doubt you would have heard some of these familiar anecdotes by now:

TL;DR: Interviews – You can dread it, run from it, but destiny still arrives

Let’s face it, job applications are integral to our career paths – it’s here to stay. So, instead of running through the typical do’s & don’ts, I’ll give you a quick run-down of what you need to do before, what could happen during, what should happen after your interviews. I’ll also rationalise why and what interviewers value in today’s job market.

1. Stage Fright – Before The Interview

It’s no surprise that nervousness often gets the better of us before each interview.

Whilst it makes sense to do prior “investigations” on companies that you have made applications to, avoid introducing too much complications to your presumably already comprehensive interview preparations. Particularly, you don’t HAVE to know exactly who upper management are.

I reiterate, it’s 2018. Understanding the goals and values of upper management are notably far more important than memorising the names and positions of executives.

Interviewers often take notice when interviewees demonstrate both an in-depth comprehension and appreciation of a company’s core values. For example, what and how it has taken steps in executing these said values.

Both a tried-and-tested formula, the perks of developing a personal script before interviews cannot be understated. However, there are underlying flaws that should be addressed.

Stay clear of rode memorisations when it comes to interview scripts. Its execution during interviews are often times perceived as monotonous or robotic – a trait all interviewees should avoid. Instead, I personally recommend summarising keynotes into point forms.

Most of all, don’t be afraid of making on the spot changes to your script – a situation most of you would undoubtedly find yourself in.

As a rule of thumb, always assume the worst. Prepare for surprises such as further elaborations or requests for proof of actions.

Admittedly one of the trickier components to master, resumes are a tough nut to crack. Realistically, they can make or break your chances at securing an interview opportunity. Sounds intimidating? That’s its sole purpose.

Thankfully, you can still find a plethora of resume samples by doing a simple Google search. This is the part where a timely reminder is in store – DON’T BE LAZY.

Instead, here are some unique scenarios that employers are increasingly utilising in place of traditional resumes.

Further, don’t be pressured into including every.single.one of your previous job experiences.

Hiring managers are not interested in your 1-month stint as a baking assistant.

In fact, carelessly listing down unrelated job experiences often draws the ire of interviewers. Remember, quality over quantity. Having no related experience but substituting it with current personal projects or realistic plans for the company beats having nonsensical inputs.

2. Mental Preparedness – During the Interview

I cannot stress this enough – to make the most effective impression, dress appropriately rather than dressing to impress. You’re there for a job interview, not a date. To that end, the simplest act of dressing accordingly shows the basic “homework” done by applicants – observing the current dress code rather than simply over-dressing for the sake of enthusiasm.

Remember, human beings are visual creatures. No matter our positions in life, we tend to make split-second judgements based on first impressions. In fact, if the consensus among hiring managers is to be believed, the actual window of time to create a good impression is approximately only 3 seconds.

In a nutshell, your ability (as basic as it may seem) to dress appropriately displays the simplest but perhaps one of the most important qualities of a star applicant – an attention to detail.

A lie of omission is essentially still a lie. While some of you may be motivated to sing endless praises about a company’s products or services, note that false praise is still no praise.

Keeping things simple may ultimately work to your advantage.

Admittedly, most would opt for the latter and I don’t blame you. The fear of missing out, especially in stressful situations, can result in unintended consequences in that split second. That said, always remember, a good manager looks out for constructive criticism rather than mindless compliments.

With each interview, you’d sooner notice familiarities, a feeling of déjà vu, if you may. At the end of the day, there are only so many unique questions you could come across.

Whilst it’d be helpful to prepare standardized answers for common questions, a neat trick you could employ would be to notice the interviewer’s body language to your initial meeting.

Picking up on these subtle body languages could be the unique opportunity you may be looking for. Leveraging on their mannerisms and adapting your responses accordingly could pique their interest and ultimately distinguish yourself from the crowd.

And so, you’ve made it past the interview. Congratulations! The hardest part is over.

But, don’t just relax yet. It’s crucial to remember that a lasting impression goes beyond the actual interview.

Don’t be afraid of appearing over-eager. This is YOUR career, make the best of it.

Sending a follow-up email not only demonstrates initiative but also indicates an innate hunger for success.

Keep it simple, to the point and uncomplicated!

More often than not, applicants worry over the amount of time they should take to reply an acceptance email. Whilst a valid concern, don’t be afraid of asking the sender how long you would have to get back to them with a reply. Responding with a time to action showcases a level of responsibility and concern to one’s urgency.

On the flip-side, checking in with your interviewer or human resources if you haven’t received a reply within a stimulated get-back date is reasonable as well.

Of course, it doesn’t hurt to be politically correct when sending such emails.

All in all, think of an interview as a gateway, not the final destination. Don’t be too disheartened if you miss one, there are always more opportunities out there.

Read what our community has shared about their interview experiences:

“How do I tackle the question of “What is your expected salary?” in job interviews? How do I know what is too high or too low?”

One can find his answer or share his experience here.

“I went to a job interview specifically telling them that overtime is a dealbreaker for me.”  Read More.