Should You Invest In CapitaLand Mall Trust? 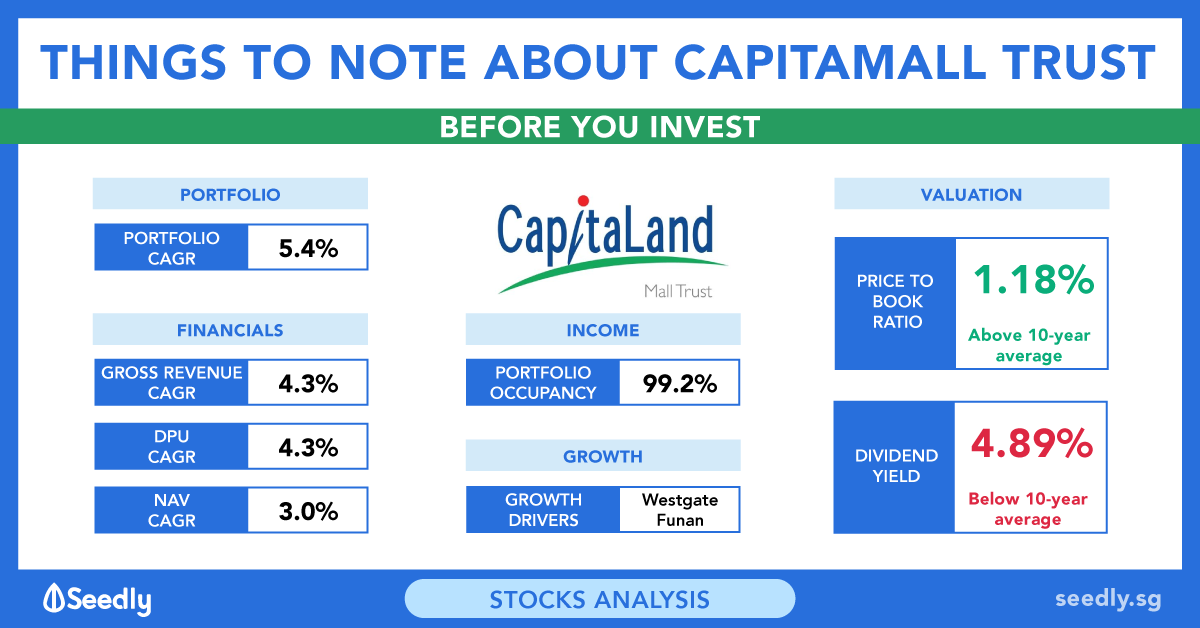 Should You Invest In CapitaLand Mall Trust?

Listed in July 2002, CapitaLand Mall Trust or CMT (SGX: C38U) is the first and the largest retail REIT to be listed on the SGX. It derives income from a portfolio of 15 retail malls worth S$11.1 billion located across Singapore.

I recently received its latest 2018 annual report and in this article, I’ll give an update on CMT’s latest financial results, growth plans, and valuation. Here are 15 things to know about CapitaLand Mall Trust before you invest.

1. CMT achieved a compound annual growth rate (CAGR) of 5.4% in its portfolio valuation for the last 10 years, from S$6.9 billion in 2009 to S$11.1 billion in 2018. This is due to the stable capital appreciation of its existing properties and acquisition of key assets such as Clarke Quay, Bugis+, Westgate, and Bedok Mall during the period.

6. Bugis Junction: In 2018, Bugis Junction has contributed S$84.9 million in gross revenue and S$61.4 million in NPI, which is at par with results achieved in 2017. The mall remains a popular retail spot; as at 31 December 2018, it recorded an occupancy rate of 99.8%, maintaining its track record of posting near 100% occupancy rates over the last 10 years.

8. Overall, CMT has achieved a CAGR of 4.3% in gross revenues, inclusive of joint venture properties, over the last 10 years, from S$552.7 million in 2009 to S$807.6 million in 2018. This is due to slow and stable growth from its properties and the acquisitions of Clarke Quay, Bugis+, Westgate, and Bedok Mall.

13. Funan mall, which has been undergoing redevelopment since 2016, is slated to reopen ahead of schedule by June 2019. The redevelopment will increase the mall’s gross floor area to 887,000 square feet upon completion, from 482,097 square feet previously. Presently, Funan mall has achieved more than 80% in lease commitments ahead of its opening.

CapitaLand Mall Trust has delivered slow and steady growth in revenue, NPI, and DPU to its unitholders for the last 10 years. Moving forward, Westgate and the reopening of Funan will serve as immediate growth drivers in the near term.

However, based on its current valuation, CMT looks slightly expensive compared to its historical averages. It should also be noted that at 4.89% per annum, CMT is also among the lowest yielding REITs compared to the rest of Singapore REITs.