Too Big to Fail? Should You be Investing in Companies That Received Large Bailouts? 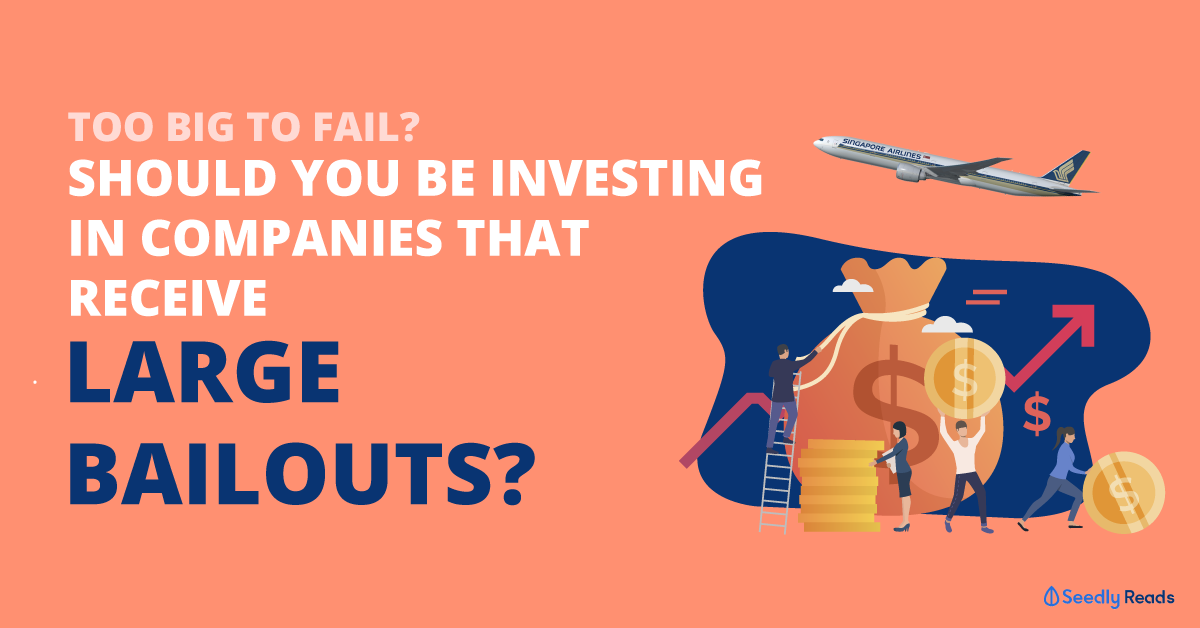 Too Big to Fail? Should You be Investing in Companies That Received Large Bailouts?

Recently I came across this question when researching about Singapore Airlines’ (SIA) $15 Billion Rescue Package (funded mainly by their main shareholder, the Singapore Government-owned Temasek Holdings).

And it got me thinking…

Is it ever a good idea to be investing in companies that need a large bailout from the government?

Although the word bailout may have a bad reputation, they are generally good for shareholders who are holding on to a company that is doing badly.

The injection of much-needed capital into a company can bring it back from the brink and shareholders will not have to worry about potential bankruptcies.

However, bailouts might also suggest that the company was managing its finances poorly and that the business might not be run well.

For the case of Singapore Airlines (SIA), the main reason why it needed a S$15 Billion Rescue Package was due to the fallout from the COVID-19 pandemic, which crushed demand for air travel.

But the airline was certainly not helped by its share buybacks in 2015, shaky balance sheet, and its negative cash flow for the past few years.

To get a good grasp on what is happening, you might want to look at why my colleague, Sudhan will not be buying SIA shares even though the share price is cheap.

While it’s sad to see our nation’s carrier in this state, as SIA has been supporting our efforts to fight COVID-19 by flying in essential supplies and bringing Singaporeans home with evacuation flights.

Not to mention their cabin crew who are serving as care ambassadors and safe distancing ambassadors.

“The government is determined that SIA will see through this crisis. SIA has always flown Singapore’s flag high all over the world and made us proud. We will spare no effort to enable it to do so again.”

But personal feelings aside, I will attempt to objectively evaluate if it is a good idea to invest in a company that needs a government bailout.

What is a Falling Knife?

This is the airline’s worse showing since 1990 when it declined to S$3.2509 on a rights-adjusted basis.

Even accounting for the ex-rights issue on 6 May 2020, this price drop is shocking due to the historical lows it reached.

If we took a step back and looked from the start of January till today, SIA’s share price has dropped by about 40.03%!

Thus, SIA has all the characteristics of a ‘falling knife’ stock.

In investing, a security is colloquially known as a falling knife stock if there is a steep drop in its price.

However, there are no specific indicators for the drop before it is considered as a falling knife.

Typically, a company that requires a bailout is in financial distress and might see its share price drop steeply.

What a Falling Knife Tells You

Like trying to catch a literal falling knife, buying into a security that is in freefall is exceedingly risky.

However, a falling knife can sometimes be a good buying opportunity for investors.

Provided that they have a strong fundamental case for owning the stock.

On the other hand, there is also a real risk that bad timing will result in substantial loses before you can reap any gains.

Why it is Tempting to Buy Falling Knife Stocks

Many people are drawn to buying falling knife stocks for a couple of reasons.

When the share prices of these companies drop steeply, the stock seems to be undervalued.

Many investors might consider this is an opportunity to buy the stock before it bounces back to its previous price — in order to turn a profit.

Another common psychological bias people have when investing is that they will anchor the current price of the company with its original price before the drop.

By doing so, they will tend to believe that the stock is cheap.

But what they’re actually doing is downplaying the significance of recent events, which caused the decline of the prices in the first place.

Even with the government bailouts, there is no telling if a company can rebound.

As such, you should consider buying these stocks if have done your homework on the company and have fundamental reasons to back them.

Speaking of things you shouldn’t be doing, you might want to look at our guide to the 10 Don’ts of Stock Market Investing during this COVID-19 crash.

Although SIA shares are trading at a historic low right now and seem to be a bargain, what investors tend to forget is that we need to invest in strong businesses with good long term prospects.

If you are investing in a company with weak prospects, it is like buying a ticket for a sinking ship.

Sure the price of admission might be cheap, but remember that you are still buying into a company that still has weak fundamentals.

Instead, you should be looking at a company’s fundamentals.

Our friends, The Fifth Person, have written a great piece on the topic of choosing strong businesses.

Such strong businesses tend to have these qualities:

Strong companies with the characteristics listed above may also take a hit during a downturn, but they usually bounce back quickly when things clear up.

What About SIA’s Long Term Prospects

Unfortunately, things are not looking too good for SIA in the long term as SIA have not been doing well even before the COVID-19 outbreak.

SIA has been struggling to grow its business in the past decade or so.

For example between 2012 and 2018, the airline’s revenues went up ever so slightly from S$15 billion to S$15.81 billion despite the launch of their new budget airline, Scoot.

For three of those six years, the profits attributable to group shareholders ranged from S$229 million to S$410 million.

This reflects the slim margins SIA has over its large asset and revenue bases.

Airlines have to renew fleets, cope with the fluctuating price of expensive jet fuel and many other expenses like the storage and maintenance of aeroplanes.

Not to mention the strong competition from budget carriers.

There’s a reason why Warren Buffett one of the most successful investors in the 21st century, has dumped all of his Berkshire Hathaway airline stocks with the company making a US$49.7 billion (S$70.64 billion) quarterly loss.

The travel industry has been hard by the COVID-19 outbreak and there’s no telling how long it will take to recover considering that the situation is unprecedented and still unfolding.

However, for some context, it took about six months for air travel to recover after the peaks of SARS and Ebola.

Even though bailouts can save a company, these are special one-off scenarios and investors should not be relying on them to get them out of trouble.

As these companies are in distress, they might be falling knife stocks which are very risky to be investing in, as it is next to impossible to predict the bottom.

Instead, you should be doing your homework on the fundamentals of the company, ensuring that it is a strong business and that its long term prospects are healthy.