10 Things To Know About Frasers Property (SGX: TQ5) Before You Invest 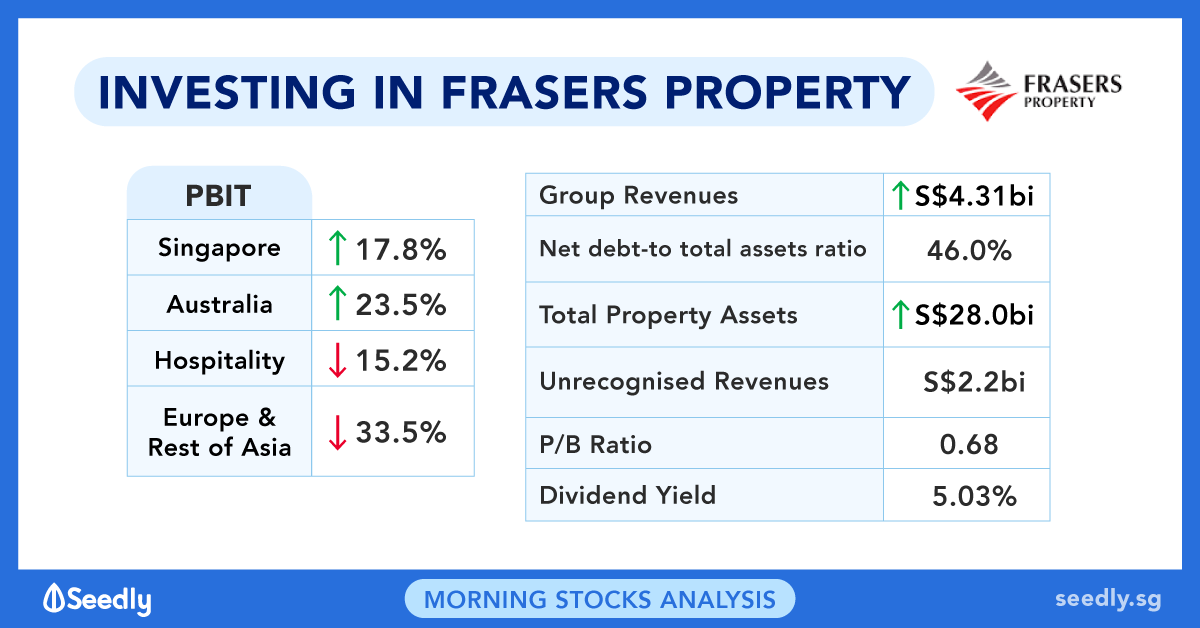 10 Things To Know About Frasers Property (SGX: TQ5) Before You Invest

Frasers Property Limited (formerly known as Frasers Centrepoint Limited) is a multinational integrated real estate conglomerate with assets located in Singapore, Australia, China, and Europe. Frasers Property is active in property development, management, REITs, and investments. As of 30 September 2018, Frasers Property has a total of S$32.4 billion in total assets.

In this article, I’ll revisit its fundamentals, provide an update on its latest results, and evaluate its valuation. Here are 10 things to know about Frasers Property before you invest.

This was due to an increase in development profits from key projects, namely: Park Life EC, North Park Residences, and Seaside Residences. This compensated for a slight reduction in distributions from Frasers Commercial Trust due to a drop in rental income from Alexandra Technopark and China Square Central in 2018. Frasers Centrepoint Trust continued to contribute stable distributions to Frasers Property’s Singapore segment.

This was mainly due to the completion of development projects, namely: Tailor’s Walk, Discovery Point, Fairwater, and other joint venture projects. This segment also saw improved financial results from its stake in Frasers Logistics Trust in 2018.

This was due to a soft performance from Frasers Hospitality Trust as a result of heightening competition in Sydney. The REIT also recorded lower demand at the Westin Kuala Lumpur, and ANA Crowne Plaza Kobe in 2018 — the latter due to Typhoon Jebi. Nevertheless, PBIT for this division has remained relatively stable over the last four years.

This was mainly due to a maiden contribution from its business park assets in the United Kingdom and the first full-year contributions from industrial and logistics properties in Germany and Holland. This segment also began recognising revenue from TICON, a Thai property developer, when it was reclassified from an associate to a subsidiary as a result of Frasers Property raising its stake from 41% in 2017 to 89.5% presently. These contributions more than offset a slight dip in development profits from China.

This is due to the management’s effort in expanding Frasers Property revenue base from predominantly Singapore to across Asia-Pacific and Europe.

8. As at 30 September 2018, Frasers Property has unrecognised revenues of S$2.2 billion from its development projects.

Over the last five years, Frasers Property has successfully transformed itself from a Singapore-centric company to one that now has a presence across Asia-Pacific and Europe. Frasers Property’s share of PBIT from Singapore fell from 87% in 2013 to just 31% in 2018. This is important to its long-term growth as the Singapore real estate market provides limited growth opportunities.

Moving on, Frasers Property has built itself a solid foundation where it will continue to earn continuous streams of recurring revenue from its portfolio of property assets. This stability allows the to be more resilient and ride through a slowdown in the property cycle.