5 Things To Know About SBS Transit Ltd (SGX: S61) Before You Invest 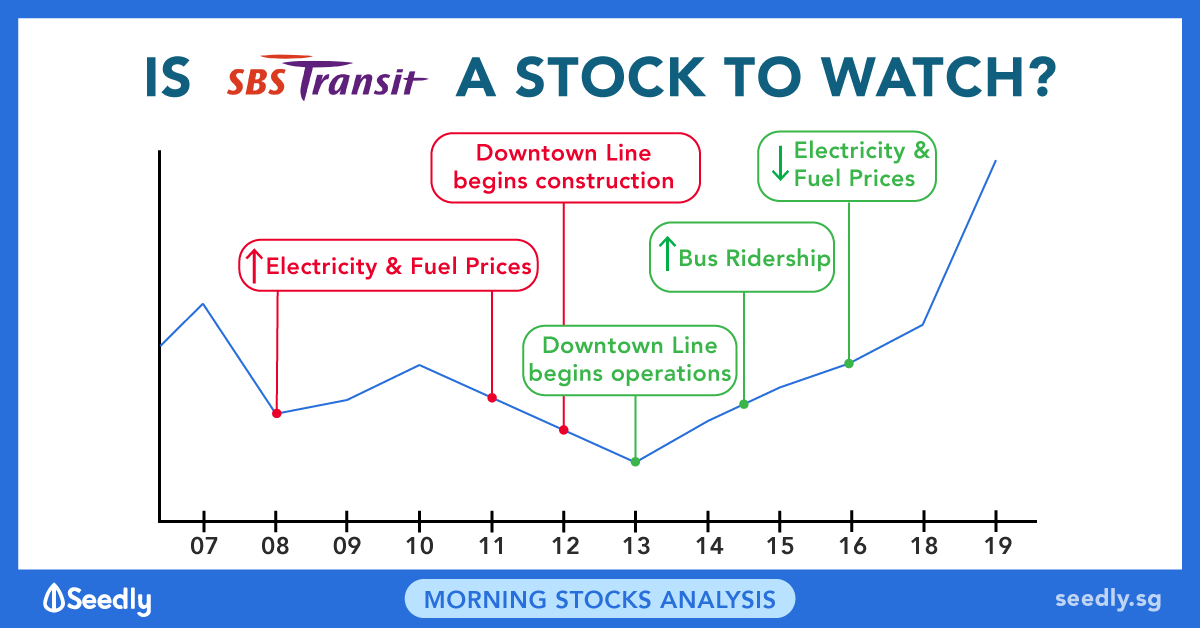 5 Things To Know About SBS Transit Ltd (SGX: S61) Before You Invest

Yup, the frenzy for SBS these recent months is evident from the sharp spike shown in the stock price chart below:

Are you excited to grab a couple of SBS’s shares in the stock market today?

If you are, please hold your horses and take a couple of minutes to read this article carefully before you decide to do anything.

Because in this article, I’ll expound the possible cause for its tumble in stock price in the past and its impressive recovery in the present. Finally, I’ll end my discussion by calculating its valuation figures based on SBS’s current stock price of S$4 per share (Editor’s note: this price is accurate only as of the time of writing).

So, without further ado, let us begin:

After some digging, I discovered that the following events could have potentially led to a tumble in SBS’s stock price between 2007 and 2014.

These significant rises in expenses outweighed SBS’s continuous rise in revenue during the 7-year period.

Consequently, it led to a drop in earnings per share (EPS) and dividends per share (DPS), causing its tumble in stock prices during the period.

2) The Introduction Of The Bus Contracting Model (BCM)

In 2016, SBS Transit entered into public bus services contracts with the Land Transport Authority (LTA) under the BCM. This was after its previous Bus Service Operating License expired on 31 August 2016.

Under BCM, SBS derives its revenue from:

SBS Transit Ltd also handles many of the new MRT lines. Side note: my family is a regular customer of the blue, DownTown Line as we live in the west.

3) Why Did SBS’s Stock Price Recover?

After it hit rock bottom of S$1.20 in mid-April 2014, SBS Transit stock has since rebounded and is somewhat the ‘comeback kid’ of SGX.

I believe its comeback was propelled by a few key factors:

SBS’s growth in revenue, in recent times, has finally outweighed its increase in costs of operations. Naturally, SBS has recorded a significant improvement in its operating profits after 2014.

And if I place SBS’s stock price chart against its chart on operating profits… We can very clearly see how the SBS Transit stock has fared in comparison to its profits.

This is exactly like what Warren Buffett says, “If a business does well, the stock eventually follows.”

I’ll be evaluating SBS Transit Ltd through a few figures:

As the SBS Transit stock price changes are in line with its operating profits, using the P/E ratio as a method of valuation will be a good gauge.

Looking at its P/E ratio for the past 10 years, it’s evident that SBS Transit Ltd was trading at an all-time low at the end of December 2018.

What this means is that even though SBS Transit Ltd’s profits have been rising, its share price has not moved in tandem. This resulted in a buyers’ frenzy which pushed up the share price by more than 40% within a short span of 3 months.

5) Our Verdict on SBS Transit Limited

With all that’s said, the next question that people will naturally ask is this: “Is SBS Transit a must buy at S$4?”

The long answer is… We would still have to look into its business model, risks involved, management team, and etc.

For some perspective, the STI Index is trading at a P/E of 13.6x currently and it usually dishes out a 3% dividend yield.

In SBS Transit’s case, it is trading at a reasonable valuation with a P/E of 15.5x and 3.2% yield. Which is not too far off from the STI Index’s numbers.

And based on the reports that I have read so far, there are no significant growth prospects or catalysts other than the following:

In our opinion, SBS Transit still has plenty of room to grow.

However, investors should take note that the fate and direction of the company are closely intertwined with government policies.

For our Stocks Analysis, the Seedly team worked closely with SmallCapAsia, who is an expert in the field, to curate unbiased, non-sponsored content to add value back to our readers.