SpaceX's Historic Launch: A Guide to Investing in the Commercial Space Industry
164
shares 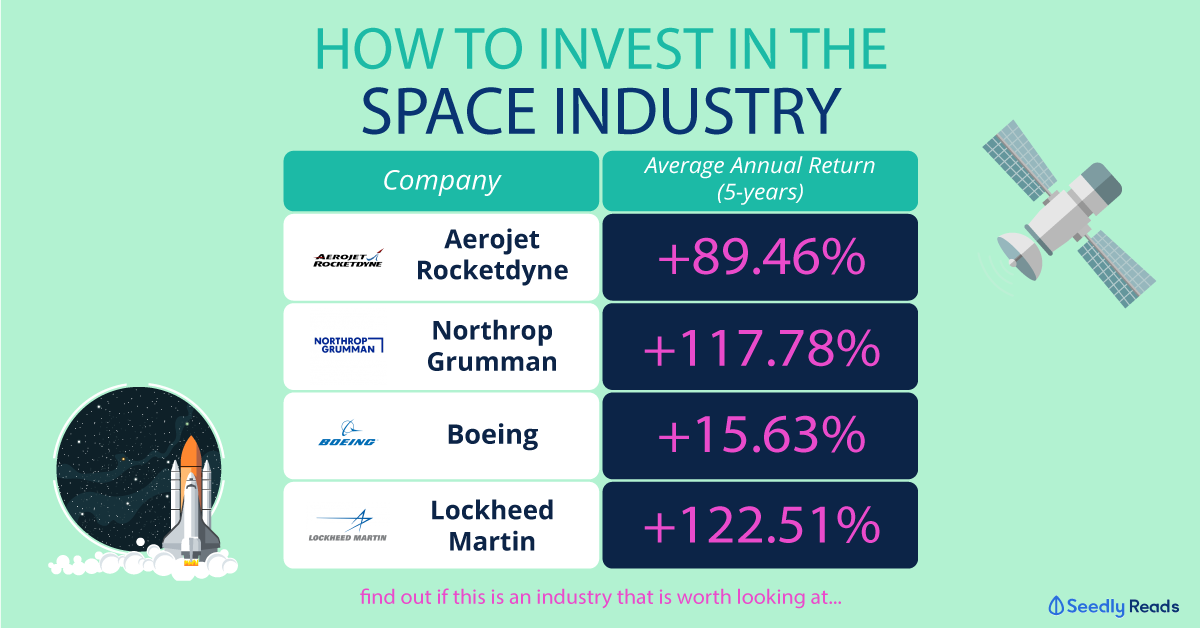 SpaceX became the first commercial company in all of human history to launch humans into space, more specifically, low earth orbit at an altitude of about 2,000 km.

FYI: Low earth orbit is also where the International Space Station (ISS) and many satellites are.

The crazy thing about this is that both the Crew Dragon Capsule and the Falcon 9 Rocket are reusable.

“what jet engines did for air transportation sixty years ago when people never imagined that more than 500 million passengers would travel by airplanes every year and that the cost could be reduced to the level it is—all because of passenger volume and reliable reusability.”

This historical event is a significant first step in the commercialisation of lower earth orbit and the wider space industry, which according to Morgan Stanley currently generates about US$350 billion in annual revenue and could generate up to US$1 trillion in revenue by 2040. 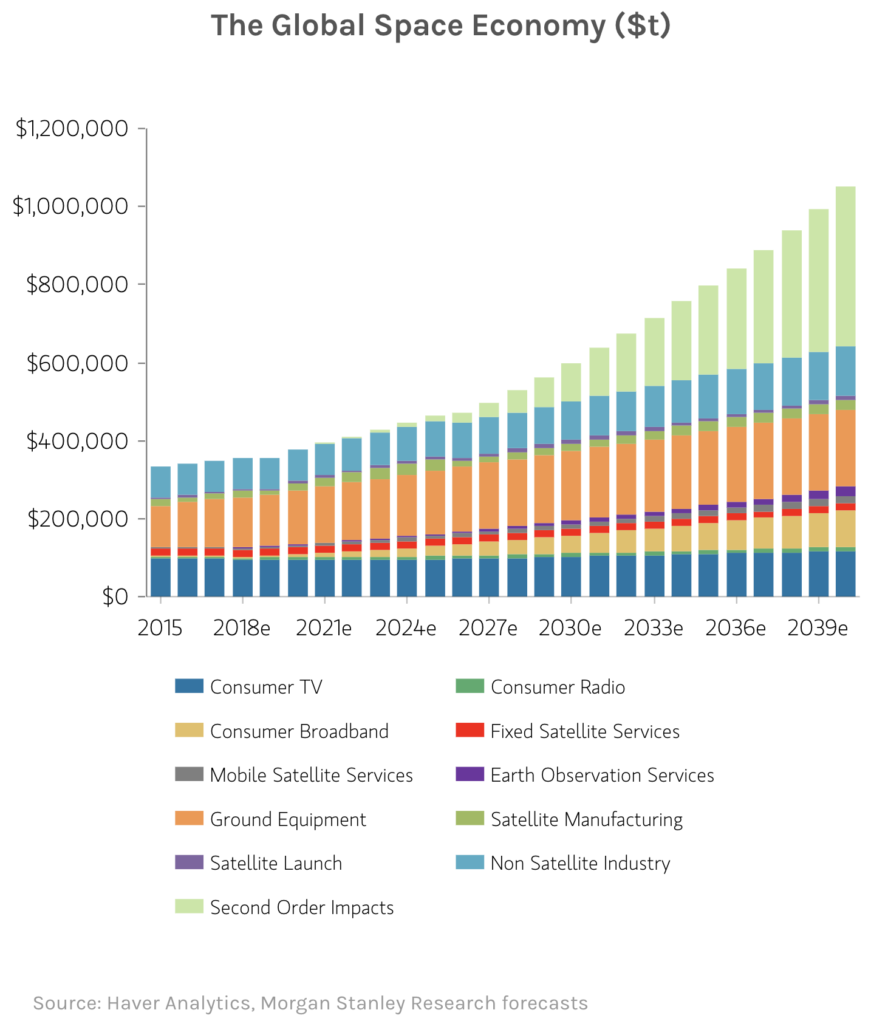 Naturally, the biggest group of customers of the commercial space industry would be national governments who would want to save money on their manned space programs.

For example, we have government customers like the National Aeronautics and Space Administration (NASA) which was paying Russia US$80 million per seat to send astronauts to the ISS.

The successful SpaceX launch vindicates NASA, who estimates that the six round trip missions contract it has with SpaceX will only cost US$55 million per seat.

Launch costs are also falling as SpaceX and other companies introduce reusable rockets and spacecraft. This will make the whole industry more commercially viable as it will bring the costs of production down.

However, when it comes to space investing, some of the most exciting companies like SpaceX, Blue Origin or Virgin Orbit are private companies owned by billionaires Elon Musk, Jeff Bezos and Richard Branson.

As such, here are the top publicly traded companies directly involved in the commercial space industry for those looking to start investing in space. List Includes a pure-play space ETF as well.

As always, we urge you to do you due diligence on these companies before investing.

However, as some companies are newer, they do not have historical data over a five year period. Instead, I will use all data available.

*Do note that this list is not meant to be exhaustive as there numerous companies involved in the space business.

Risks of Investing in The Space Industry

Before we begin, you will need to understand the risks involving in the space industry.

Think about what risks you are comfortable with and what expectations you have.

Even though the cost of space hardware is going down, businesses in this industry are faced with high capital costs and high risk and volatility.

When you are investing in companies with crazily ambitious plans to travel to space, you will naturally have shares that are more volatile as they are different from conventional businesses.

First up we have Aerojet Rocketdyne, a U.S. company that manufactures propulsion systems for rockets and missiles.

In other words, they build rockets engines that send spaceships up to space and missiles to their targets.

The company has steady clients in NASA, the American military and other companies in the defence industry

For example, the company supplies engines for NASA’s Space Launch System megarocket that will be used for the future Artemis moon missions with a targeted launch of 2024. In addition, they supply engines for America’s Minuteman intercontinental ballistic missiles and other missile contracts.

Plus, they also recently signed a new five year deal with Raytheon Technologies worth US$1B to provide engines for Raytheon’s missiles.

However, it has a strong competitor in Amazon founder Jeff Bezos’s company Blue Origin as it lost a contract to build next-generation engines for the United Launch Alliance in 2018.

Over the last five years, Aerojet Rocketdyne stock has produced a healthy average annual return of +89.46%.

With a market capitalisation of just US$3.42 billion, Aerojet Rocketdyne is one of the smaller companies on this list. But, it managed to generate US$368 million in gross profit last year a 6.05% increase from 2018.

The company is steadily growing and is increasing its gross profit as well.

Next up we have Northrop Grumman a U.S. aerospace and defence technology company that is also one of the world’s largest weapons manufacturers and military technology providers.

On top of that, they are also competing with other companies for a contract to build a launch system for the US Air Force.

Over the last five years, Northrop Grumman stock has produced a healthy average annual return of +117.78%.

As for its size and performance, the company has a market capitalisation of US$54.52 billion and generated a gross profit of about US$7.25 billion last year a 6.89% increase from 2018.

The company is growing at a faster rate than Aerojet and is steadily growing its gross profit as well.

The Boeing Company is a U.S. multinational corporation that produces and sells aeroplanes, rotorcraft, rockets, satellites, telecommunications equipment, internationally with a market capitalisation of US$86.51 billion. 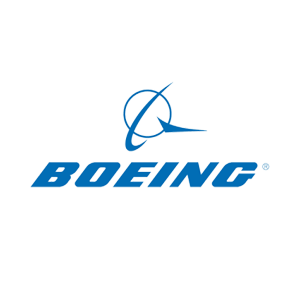 The company’s close competitor in the launch business is undoubtedly SpaceX.

It recently competed with SpaceX under the NASA Commerical Crew Program to build and design a reusable capsule to send NASA astronauts to the ISS and other private space stations.

NASA awarded Boeing US$4.2 billion to build the Boeing CST-100 Starliner capsule. Both companies were supposed to launch missions in May 2020 but Boeing’s launch has been delayed till 2020.

In addition, the company is the main contractor the NASA’s Space Launch System megarocket that will be used for the future Artemis moon missions.

Aside from their human spaceflight sector, Boeing has been hard hit by the COVID-19 pandemic which has brought the airline industry to its knees.

Over the last five years, Boeing stock has produced a comparatively modest average annual return of +15.63%.

Since the start of this year, Boeing’s stock has fallen –52.94% as they have been hard hit by the COVID-19 pandemic due to their exposure to the airline industry.

Also, Boeing and Lockheed Martin teamed up to set up the United Launch Alliance, a joint venture that was the sole supplier the U.S. airforce for years.

Lockheed Martin’s clients include the American government, the Department of Defence and NASA, providing them with satellites, rocket launch systems and ground systems.

They have also been awarded a contract worth at least US$4.6 billion to build six Orion spacecraft for NASA’s deep space missions. In the future, NASA is very likely to order more capsules from them.

With a market capitalisation of US$109.3 billion, the company is massive and has been holding steady this year despite COVID-19.

Next up we have Maxar Technologies a small company with a market capitalisation of just US$975.76 million. The company is a space technology that primarily builds satellites, satellite products and provides satellite services.

Despite their size, they have been marking waves as they were awarded a US$375 million contract to build the first components of NASA’s Lunar Gateway space station.

In addition, they were selected by NASA to support Dynetics to design and manufacturer a lunar lander for NASA’s Artemis moon missions.

Over the last three years, Maxar Technologies stock has produced a negative average annual return of -63.45%.

Next up we have the only publically listed company in the space tourism industry as its other competitors: SpaceX, Blue Origin, Orion Span are all private companies.

Virgin Galactic is a spaceflight company under the Virgin Group. The company is focused on providing commercialised spacecraft that brings space tourists on suborbital flight as well as suborbital launches for space science missions.

This company is the very definition of a risky growth stock with its valued tied to its potential for spectacular growth.

However, they have managed to prove that it can reach space with its suborbital SpaceShipTwo spaceplanes. However, during the test flights in 2014, one of the spaceplanes the VSS Enterprise crashed and killed one pilot and injured the other.

Despite this setback, they are somewhat on track.

In Virgin Galactic’s 2020 first-quarter results report, the company had earnings before interest, taxes, depreciation and amortization (EBITDA) loss of just $53 million which was lower than last quarter.

In addition, they have signed a “Space Act Agreement” with NASA, to assist with NASA’s long-distance hypersonic travel project.

It is unclear how much these business agreements are worth but investors must think that it is quite valuable.

Over the last year, Virgin Galactic stock has produced a return of +53.15%. They also have a market capitalisation of US3.329 billion.

Last but not least we have the Procure Space Exchange Traded Fund (ETF), a space economy themed ETF focusing on pure-play space companies. 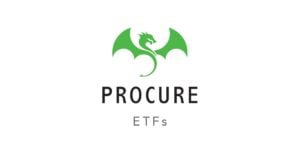 The ETF consists of 30 publicly traded companies that derive at least 50% of their income from space-related businesses.

These companies are involved in sectors like rocket manufacturing to satellite technologies and even GPS companies.

As always with ETFs be sure that you will invest in the top companies that make up the majority of the portfolio.

Do note that the ETF is not diversified.

Over the last year since its inception, this ETF has gone down by -19.54%. The fund is quite also quite small with net assets of just US$16.01 million.

There you have it! An introduction to investing in the space industry.

Got Any More Questions About Investing?

Why not head over to our friendly SeedlyCommunity to get some answers!