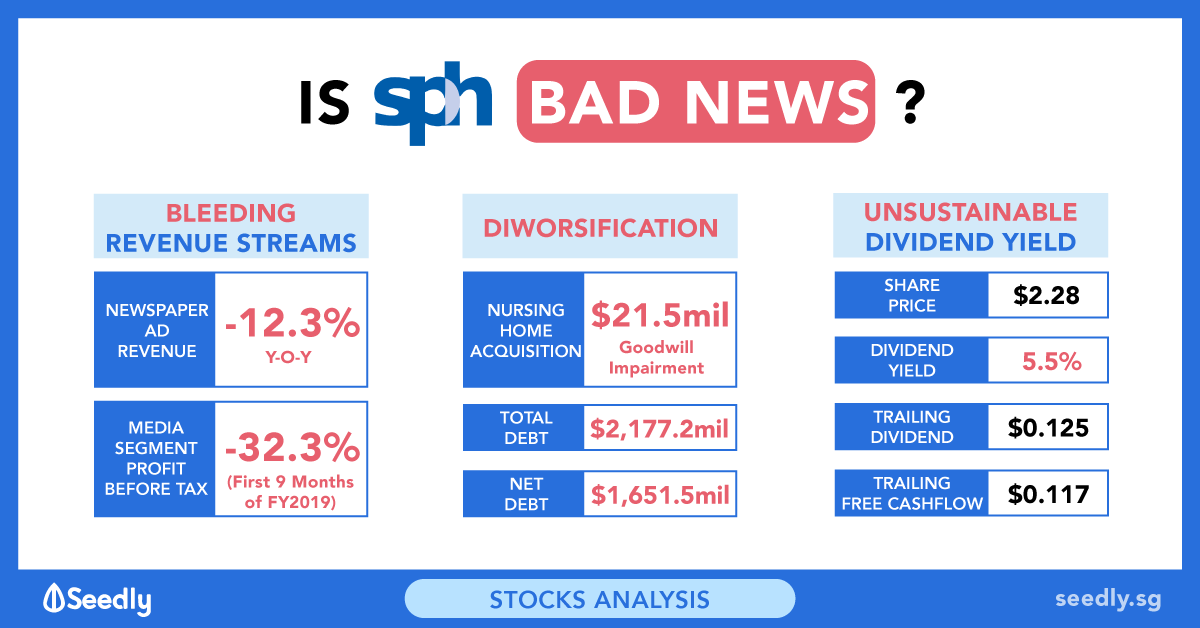 Newspaper publisher and property developer Singapore Press Holdings Limited (SGX: T39), also known as SPH, shares have delivered a loss of 35% to investors over the three years ended 17 July 2019, after adjusting for dividends.

The decline in the company’s share price to S$2.28 (as at the time of writing) may pique the interest of bargain-hunters since the dividend yield on the shares is high at 5.5%.

However,  I think that investors should stay away from the company’s shares.

SPH counts the Media Segment as its largest revenue contributor; in the first nine months of its financial year ending 31 August 2019 (FY2019), the segment, which houses the company’s newspaper publication business, accounted for 60.1% of SPH’s revenue. Unfortunately, the Media Segment has been under pressure for years. The table below shows how SPH’s newspaper ad revenue has declined in each year from FY2012 to FY2018.

The bleeding has not stopped, as the company’s newspaper ad revenue posted a 12.3% year-on-year decline in the first nine months of FY2019.

But the profit-picture still remains ugly.

In the first nine months of FY2019, the Media Segment’s profit before tax fell by 32.2% from S$76.8 million a year ago to S$52.1 million. If the Media Segment’s revenue continues to be dragged lower due to structural changes in the environment for SPH’s newspaper ad business, the company’s overall profit may struggle to grow – and that won’t be good for the company’s shareholders.

Diworsification And A Weakening Balance Sheet

SPH has been trying to build new income streams, but unfortunately, the results have been poor.

In April 2017, the company announced the acquisition of nursing home operator Orange Valley Healthcare for S$164 million. When the news first broke, I was critical of the acquisition, calling it an attempt by Singapore Press Holdings to “diworsify”.

Diworsification is a term introduced by fund manager Peter Lynch, and can be understood as the act of a company acquiring completely unrelated businesses, and in the process, causing its overall results to suffer.

In SPH’s latest earnings update, for the quarter ended 31 May 2019, a goodwill impairment of S$21.5 million for the Orange Valley business was charged. Goodwill arises when an acquirer pays a price that’s higher than the book value (assets less liabilities) of the acquired entity.

This goodwill then has to be tested regularly against the acquired entity’s business performance; if the entity’s business results are poorer than expected, then impairment of the goodwill will be made – this is what happened to SPH.

The company determined that Orange Valley’s business environment looked poorer than originally projected because of an increase in the supply of nursing home bed capacity. If Orange Valley’s results don’t improve, more impairments could be on the way.

In September 2018, SPH started another diversification attempt, this time into 14 purpose-built student-accommodation (PBSA) assets in the UK for S$321 million. Since then, SPH has enlarged its PBSA portfolio to a total of 20 properties with a collective asset value of more than S$600 million.

It’s still too early to tell whether these acquisitions are sensible, but SPH is off to a good start. In the first nine months of FY2019, the PBSA portfolio delivered a pre-tax profit of S$13.8 million, which is over 8% of SPH’s total pre-tax profit of S$164.2 million for the same period.

It’s also worth noting that SPH’s entry into student-accommodations assets was made under the watch of current CEO Ng Yat Chung, who assumed the role on 1 September 2017, whereas the Orange Valley acquisition was made during the tenure of the previous CEO Alan Chan Heng Loon. So, things may be different with SPH’s entry into PBSA assets. But, SPH’s balance sheet has weakened severely since Ng’s appointment, as shown in the table below.

So, SPH’s room for error with the PBSA portfolio is a lot smaller than with the Orange Valley acquisition.

Unfortunately, this yield does not look sustainable – the company’s trailing free cash flow per share is just S$0.117, according to S&P Global Market Intelligence.

(Note: SPH reports operating cash flow after the deduction of dividends paid to shareholders whereas S&P Global Market Intelligence does not.)

Further exacerbating the problem is that SPH’s free cash flow has declined dramatically over time as the table above illustrates.

If SPH’s free cash flow can’t grow in the years ahead – bearing in mind that its largest revenue generator, the Media business, is under severe pressure, and the company’s balance sheet is now much weaker than in the past – the dividend has to fall.

To sum up, here are the negatives I see in SPH and why I think investors should stay away from the company’s shares:

I may be wrong about SPH as an investment opportunity, but at the very least, I hope prospective and current investors in the company will pay attention to the risks I highlighted above.

Why not check out Seedly’s QnA and participate in the lively discussion surrounding stocks like Singapore Press Holdings Limited and many more!