IRAS Tax in Singapore & Revenue Explained: Find Out How Much Tax Was Collected in FY2021/22 & Where It Was Spent!
165
shares 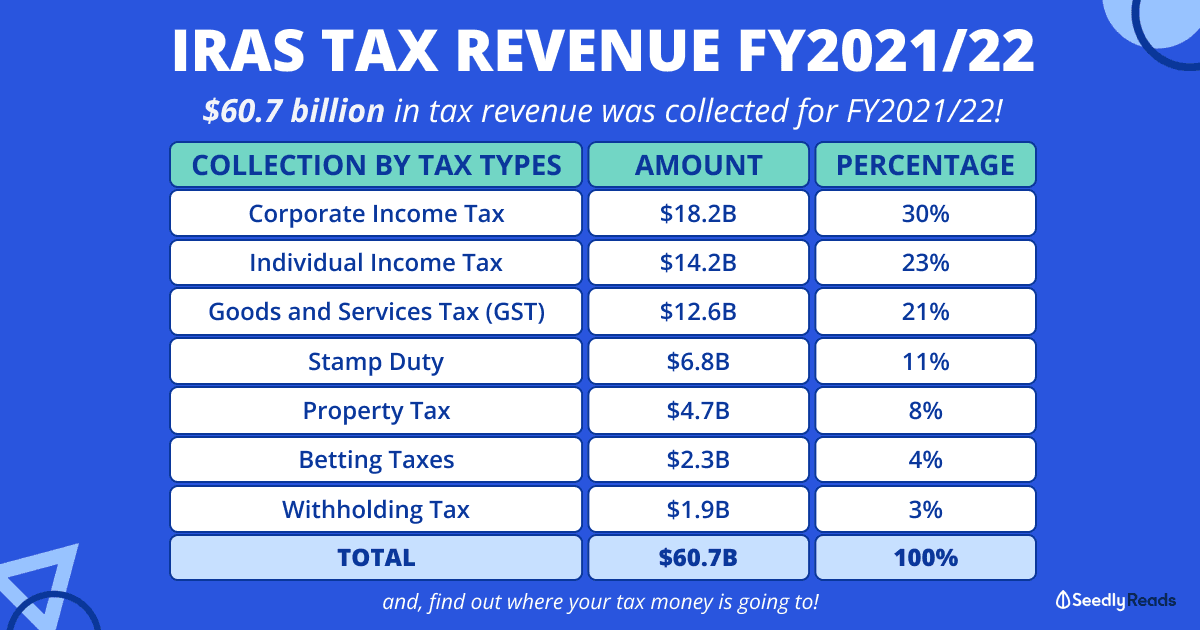 IRAS Tax in Singapore & Revenue Explained: Find Out How Much Tax Was Collected in FY2021/22 & Where It Was Spent!

“I hate paying taxes. But I love the civilization they give me”
― Oliver Wendell. Holmes

As much as I hate paying taxes, I can’t deny that Singapore and other Singaporeans like me have benefitted from tax money being spent:

P.S. Check out these tips to reduce your income taxes if you hate paying taxes as much as I do.

But, I would think that as law-abiding, tax-paying people who live in Singapore, you would want to know how much taxes the Inland Revenue Authority of Singapore (IRAS) collects and where the money is going.

TL;DR: IRAS Singapore Tax Revenue Guide — Here’s How Much Tax Was Collected in Singapore for FY2021/22 & Where It Was Spent! 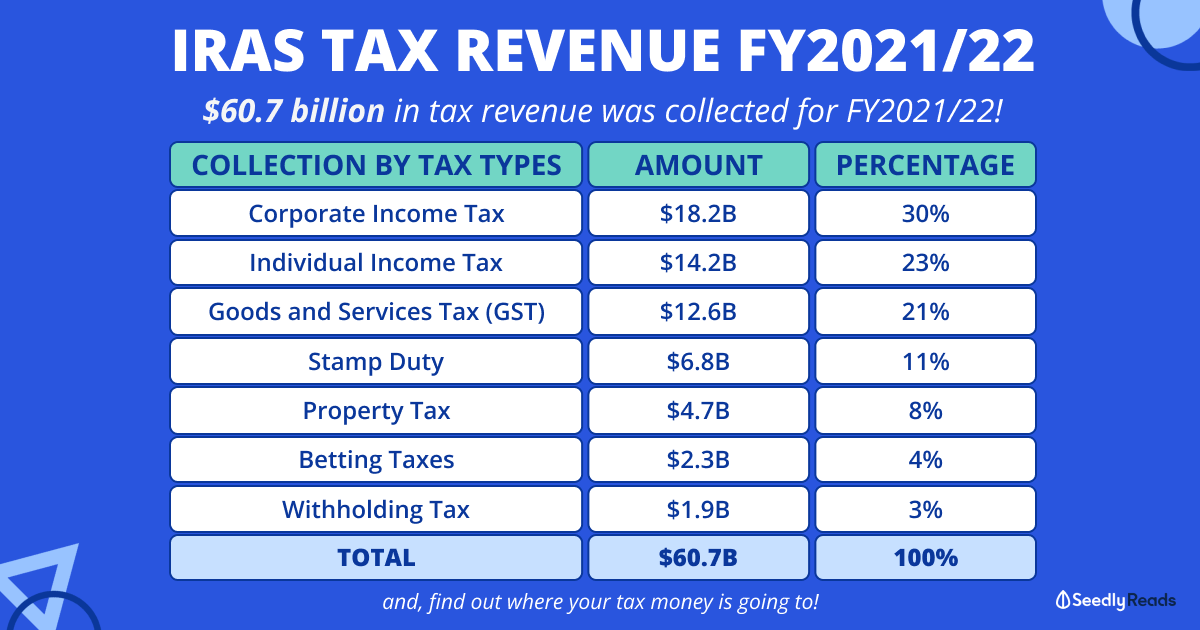 According to the latest IRAS Annual Report FY2021/22, the statutory board collected $60.7 billion in tax revenue for FY2021/22 or $11.1 billion more than the previous financial year.

This is an increase of 22.4 per cent increase in tax revenue collection as Singapore’s economy recovered after COIVD-19 restrictions were considerably eased from 26 April 2022.

For context, this substantial percentage increase was because less tax was collected in FY2020/21 due to the pandemic, where the amount of tax collected fell by as much as 7.3 per cent, from $53.5 billion to $49.6 billion.

So you might wonder, does the Government only get money from taxes?

That’s not the case as the Government’s Overall Revenue comprises of Government’s Operating Revenue and the Net Investment Returns Contribution (NIRC).

According to the Ministry of Finance (MOF), NIRC consists of:

In addition, the amount of tax collected in FY2021/22 makes up 73.6 per cent of the Government’s operating revenue or 11.4 per cent of Singapore’s Gross Domestic Product (GDP).

The second biggest share of tax revenue comes from individual income tax, which increased to $14.2 billion, up from $12.8 billion last year. Interestingly enough, a majority or 80 per cent of individual income tax was contributed by taxpayers who earn more than $150,000 a year.

The third biggest share of tax revenue was derived from Goods and Services Tax (GST), with IRAS collecting $12.6 billion worth of GST.

IRAS mentioned in the report that this increase in stamp duty revenue could be attributed to the red hot property market and an increase in the number of property transactions.

Where Did The Tax Money Go?

With so much tax revenue, you might wonder where the money is going.

Unsurprisingly, most of Government spending is on healthcare, Singapore’s defence and Education.

According to the MOF, FY2021 saw the Government spending on the following areas:

In addition to transfers from the Government’s operating expenditure and spending from Government Endowment Funds and Trust Funds, households will receive special transfers amounting to $0.5 billion in Budget 2022. These include $252 million for GST Voucher Special
Payment and $241 million for Others, including some components of the Household Support Package. In total, special transfers to businesses will amount to $1.7 billion, comprising an estimated $1,600 million under the Jobs Support Scheme (JSS) and $99 million for other transfers

Top-ups to Endowment and Trust Funds ($4.1 billion)
In Budget 2022, the Government will top up the new Progressive Wage Credit Scheme Fund by $2,000 million to co-fund wage increases of lower-wage workers to provide transitional support for employers for the Progressive Wage moves. The Government will also inject $1,000 million into the GST Voucher Fund to fund additional measures to cushion the impact of a GST rate increase. 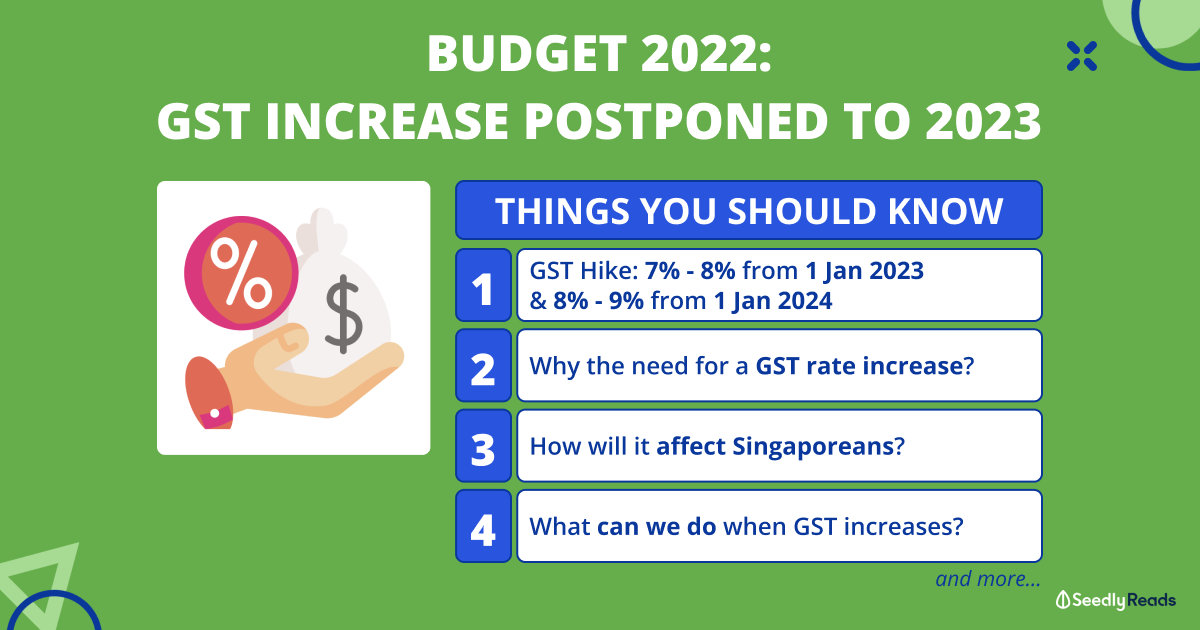 Other fund top-ups are to the National Research Fund ($900 million) and the Cultural Matching Fund ($150 million). In total, $4.1 billion will be committed to funding top-ups.