Will Tengah Property Prices See The Same Rise As Punggol? 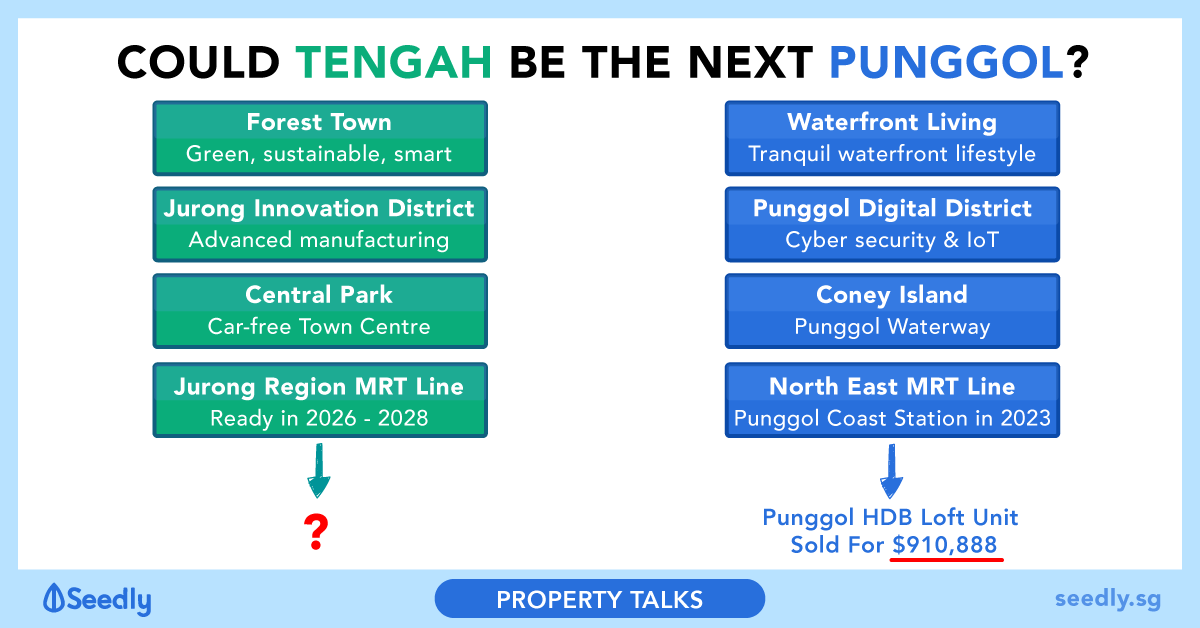 Will Tengah Property Prices See The Same Rise As Punggol?

As compared to Punggol today, the upcoming Tengah Town will take some years to build infrastructure, amenities and transport connectivity to make it a Punggol equivalent. For reference, Punggol was unveiled in 1996, and underwent the Remaking Our Heartland (ROH) programme in 2007, before its housing reached record prices in 2019.

At a glance, Tengah will:

If you’re a young couple looking at BTO options, there is little doubt that you would have heard of the new Tengah – Singapore’s first new HDB town in over 20 years since Punggol.

Located within the West Region, Tengah is bounded by Choa Chu Kang to the Northeast, and Jurong East and Jurong West to the South, Bukit Batok to the East, and the Western Water Catchment to its West and North. It was formerly a military restricted area since villagers there were resettled in the 1980s and 1990s.

The estate stretches for over 700ha, roughly the size of Bishan. HDB envisioned Tengah as a “Forest Town”, to be designed with green, sustainable and smart features, and will also feature the country’s first car-free town centre.

The first BTO project in Tengah, Plantation Grove, is the first of five housing districts to be developed in Tengah. Along with the other housing districts – Park, Garden, Brickland and Forest Hill, each Tengah district will be designed to correspond with a facet of the town’s identity.

Already, Tengah is being hailed as the next Punggol – but is it really?

The blueprint for Punggol 21 was first unveiled in 1996 by former Prime Minister, Goh Chok Tong, with the vision of developing Punggol 21 as “A Waterfront Town of the 21st Century”.

Subsequently, in September 2007, Prime Minister Lee Hsien Loong unveiled new plans under the Remaking Our Heartland (ROH) programme. Punggol was selected as one of the pilot towns under the ROH programme, with new strategies and plans formulated to reinforce and realise the vision of Punggol as a waterfront town.

Among the plans was to dam up Sungei Serangoon and Sungei Punggol, and introduce a 4.2km-long man-made waterway through the town to connect these two reservoirs, opening up opportunities for waterfront living and water-based activities.

Fast forward to 2019, Punggol HDB flats are hitting record prices, with a 149 sq m (1,604 sq ft), five-room, loft unit in Punggol Sapphire sold for $910,888 in January. The transaction marked a new high for an HDB flat in the suburban public housing estate in the northeast region.

As a whole, the average price of standard resale flats in Punggol rose by 16% between 2008 and 2018. Over the same period, prices of 4-room flats rose 39%, while prices of 5-room flats rose 21.4%, according to data from OrangeTee & Tie Research & Consultancy.

“Tengah has a very distinct feature that is different from Punggol. It appeals more to buyers who like nature and lush greenery. However, it may take some years before Tengah can reach the capital appreciation that we are seeing in Punggol,” says Christine Sun, head of research & consultancy at OrangeTee & Tie.

She explains that the completion of amenities such as the Waterway Point mega mall, transport connectivity, new private residential properties, as well as plans to make Punggol the next digital district, has contributed to the area’s growth.

“Of course, it took a number of years to build up Punggol town and it may also take some years to build the infrastructure, amenities and transport connectivity in Tengah to achieve the kind of potential that we are seeing in Punggol now,” says OrangeTee & Tie’s Sun.

Meanwhile, Alice Tan, director of residential project marketing at Knight Frank opines that Tengah presents various demand drivers for new residential properties in the future, contributed by the government’s plans to inject commercial and business park spaces in Bulim industrial estate which will be within a short drive to Tengah.

“Additionally, the Jurong Region Line will substantially increase the rail connectivity of Tengah to other parts of Singapore, potentially raising the prospects of capital appreciation in the long term future when the Line is complete by 2026 onwards,” says Alice.

“Starting from a ‘clean slate’ greenfield zone, designing new lifestyle and recreational amenities to establish a unique and liveable ecosystem in Tengah are compelling features to boost home demand,” she concluded.