8 Things I Learnt From The 2019 BreadTalk AGM 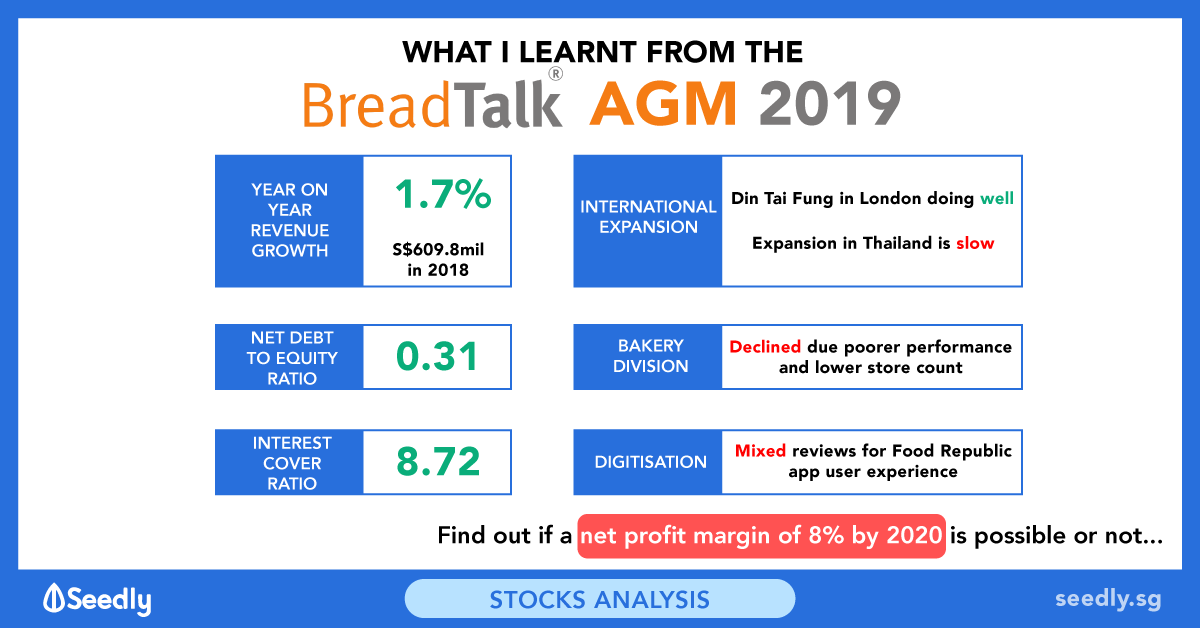 8 Things I Learnt From The 2019 BreadTalk AGM

A couple of years ago, I wrote that BreadTalk (SGX: CTN) aimed to achieve a net profit margin of 8% by 2020. Yet so far, its net profit margin (2.1% in FY2018) is still far below its intended target. This prompted a shareholder at this year’s AGM to ask the management whether their target still remained valid.

The answer was ‘yes’.

But the bad news is that BreadTalk only has two years left to hit its target. Can they really achieve it?

It looks like a far-fetched goal at this point in time. But I gained a few insights on what caused BreadTalk’s current depressed margins and how it plans to achieve its 8% target by 2020 when I attended the AGM.

Here are eight things I learned from the 2019 BreadTalk AGM.

On a segmental basis, the Bakery division was a drag with revenue and EBITDA falling in FY2018. The lower EDITBA for the 4orth and Restaurant divisions were mainly due to start-up costs for new outlets. Despite a challenging year, BreadTalk generated positive free cash flow of S$17 million.

2. The Bakery division declined in 2018 due to poorer performance and a lower store count – a decrease of eight outlets from a year ago to 863 outlets.

Group CEO Henry Chu is directly overseeing the bakery division to turn around results and margins are expected to recover this year. A shareholder wanted to know whether the division was still a viable business in spite of competition.

Chairman George Quek said that the bakery business in Singapore is still performing well on a standalone basis; it recorded same-store sales growth in the last two years.

He acknowledged that the current space was competitive and it’s important to be innovative to stay ahead. BreadTalk is also increasing automation by moving some front-line production to its back-end central kitchen to improve efficiency and margins.

3. The balance sheet remains healthy with a low net-debt-to-equity ratio of 0.31 and an interest cover ratio of 8.72 in FY2018. An analyst noted that BreadTalk had S$185 million in cash and asked why some of it wasn’t used to pay down the company’s loans of S$227 million.

CFO Chan Ying Jian explained that there are some legacy investment assets tied to these loans which can only be freed up upon divestment. The company needs a cash buffer for working capital and expansion of new outlets.

The good performance didn’t flow through to the bottom-line due to start-up losses as pre-opening costs for large restaurants are high in London. To operate profitably in London, the management figures it needs at least five operating restaurants and a centralised kitchen. It remains to be seen if BreadTalk’s investment in London will work out in the long run.

5. The 4orth food concepts division was also a big drag to the bottom-line mainly due to pre-opening costs of new outlets.

The management intends to open three new Wu Pao Chun outlets and 15 new Song Fa Bak Kut Teh outlets in 2019. The CEO expects these new stores to achieve a 10% net profit margin on average. Barring unforeseen circumstances, net margins for the Restaurant and Food Atrium divisions should also be around 10%.

Along with the recovery from the Bakery division in 2019, the CEO is confident that the overall net profit margin target of 8% is still achievable by 2020.

6. BreadTalk has been trying to expand in Thailand but progress has been slow. Previously, the management was confident that its joint venture with Minor Food Group would help BreadTalk’s growth in Thailand, but the partnership hasn’t worked out as planned. BreadTalk has since fully taken over their joint venture and will navigate the Thai market on its own moving forward.

7. BreadTalk acquired a 20% stake in NPPG (Thailand), a flexible plastic packaging producer, for around S$24 million. This worked out to a three times sales multiple for the loss-making acquisition. The Fifth Person investment analyst, Ong Kang Wei, questioned the rationale behind the transaction. The CEO explained the acquisition is a strategic one as NPPG produces a lot of food packaging and would be able to fulfil BreadTalk’s flexible packaging needs across its various food chains. BreadTalk could also potentially work with Charoen Pokphand Group (CP), who is an anchor investor of NPPG, including:

The CEO added that although NPPG made a loss in 2018, results should improve this year as CP Group sent their turnaround specialist who has successfully turned around three companies before.

8. FR Rewards, a loyalty and payment app, was launched last year which allows users to pay for meals at all Food Republic outlets and earn points for every transaction.

I actually tried signing up for it when it first launched but I faced issues with my registration and ended deleting the app from my phone. This year, I decided to give the app another shot after seeing an advertisement for it at Food Republic.

However, to my surprise, the food stall operator didn’t know how to use the app and a manager had to be summoned to help me out. On another visit, the app didn’t list the stall I was buying from and so I wasn’t able to use it.

It’s great that BreadTalk is pushing digitisation and rewarding loyal customers. At the same time, there’s a lack of staff knowledge about the app and it still seems like a work-in-progress.