Your Job Does Not Define You: Life Lessons From My Mother, a Domestic Cleaner 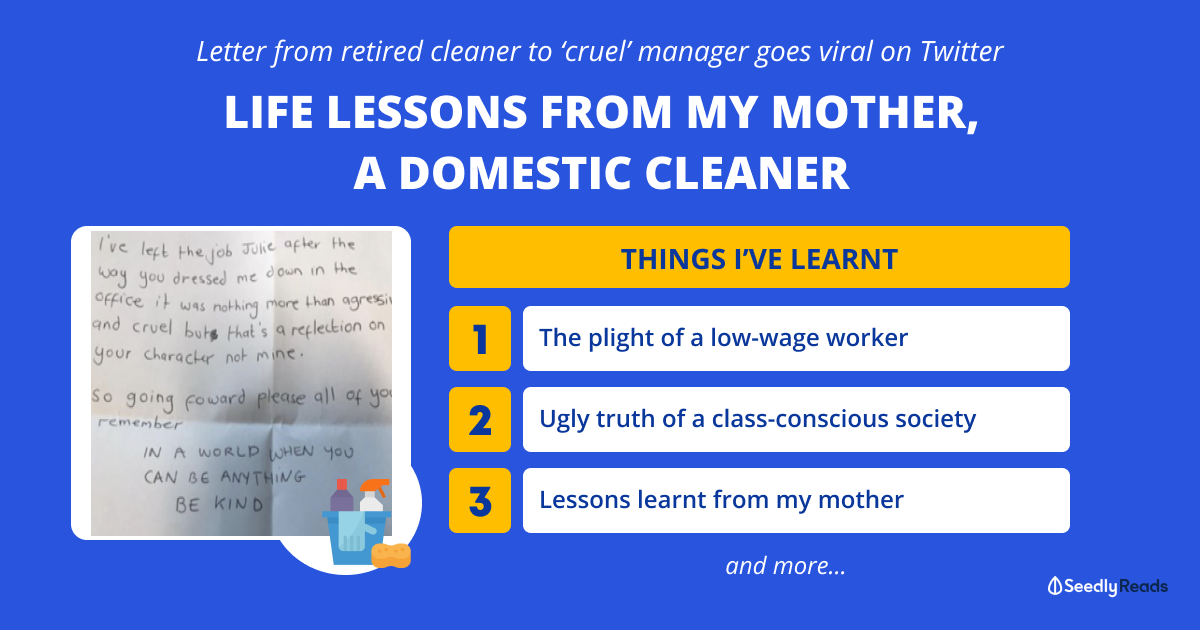 Your Job Does Not Define You: Life Lessons From My Mother, a Domestic Cleaner

Recently, a letter by a retired cleaning lady got viral on Twitter.

The lady’s son tweeted a letter that was written on her last day of work, and it spoke about how she is leaving the job after 35 years, after getting reprimanded in the office by the manager.

In the letter, she mentioned how ‘awful’ the manager was, and how the manager’s actions clearly reflected his/her own character.

She also urged everyone to remember to be kind towards everyone, regardless of status.

This tweet received tremendous support from strangers, who sent in kind words and also shared their own experiences.

Reading this really hit home because my own mother is a domestic cleaner.

And this tweet is a painful reminder of the things she has been through as well.

The Plight of a Low-Wage Worker 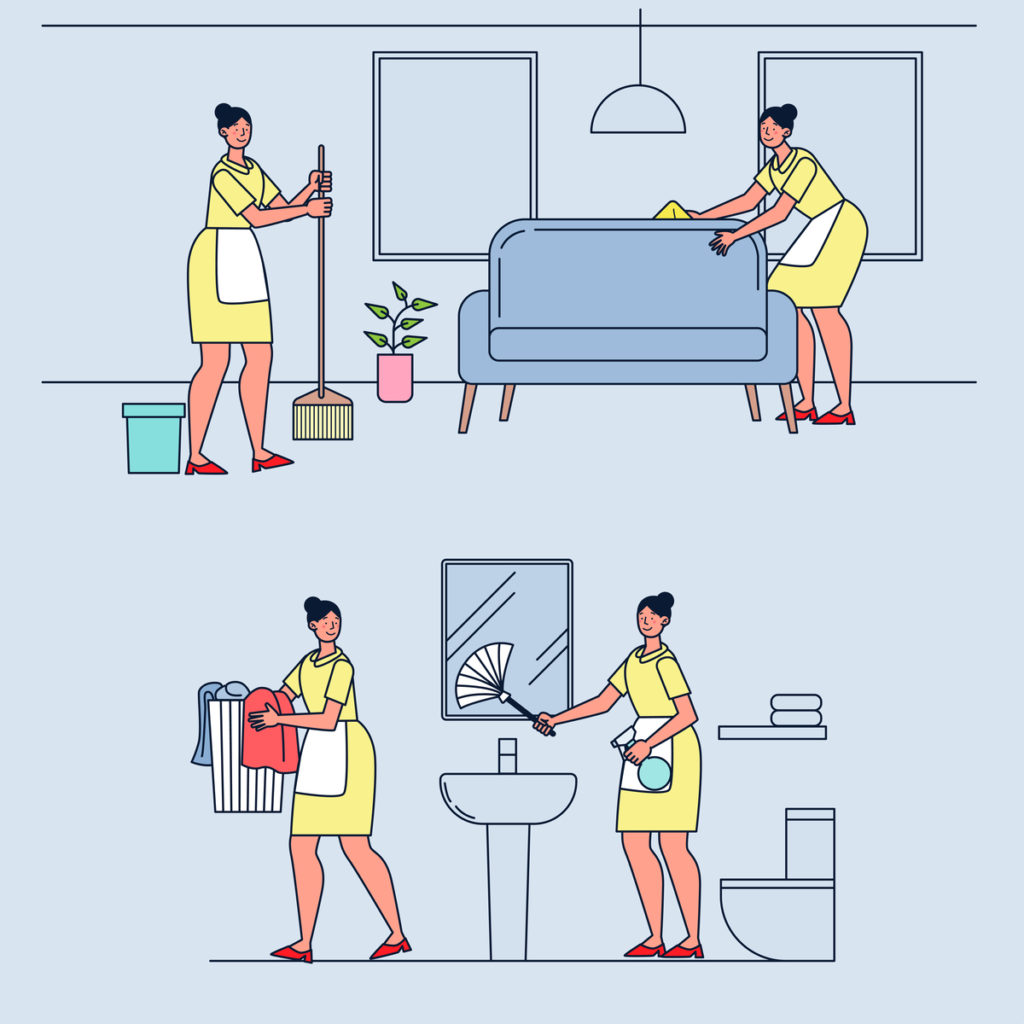 My mother has been a domestic cleaner for more than ten years.

Or housekeeper, as some would call it.

If you’re wondering what’s that, she’s the one who heads to your place to help with your house chores, which includes ironing your clothes, washing the toilets, and mopping the floor.

Armed with just a primary school certificate, my mother started working since she was 18.

After giving birth to me and my siblings, she stayed home to be a housewife for a couple of years before stepping back into the workforce, in a bid to provide more financial support for the family.

However, her education qualifications meant having limited options for her career.

As such, she dabbled with various blue-collar jobs, which includes being a bakery assistant, sushi chain assistant, or even a factory production worker where she had to pull long night shifts.

It was only in my older years that I realised the amount of disrespect and humiliation she had experienced over the years as she held these positions at work.

And it was simply because of her status and how it was viewed by society.

It is a heartwrenching reminder of how common it is to tie an individual’s self-worth to their career.

(How do you determine if you’re ‘high-class’ or ‘low-class’? Here’s what the others think…)

The Ugly Truth of a Class-Conscious Society

While the cleaning lady on Twitter seems to be residing in the UK, this situation is not unique to their country.

My mother has her own share of difficult moments as a domestic cleaner in Singapore as well.

I remember how she would recount being treated differently by homeowners (aka her employers), often bearing the brunt of rude and dismissive remarks.

Feeling invisible has already become part and parcel of my mother’s daily life, as she takes on duties that are usually seen as a ‘dirty job’.

This shows that while the society we live in is modern and advanced today, it is unfortunately still largely hierarchical, where low-wage workers are still often looked down on.

And It is heartbreaking to know that they are often not treated with the respect and dignity that she deserves.

And the worst part is…

My mother has tied her own self-worth to her socioeconomic status, internalised such behaviour, and has taken it in her stride that she will always be looked down on by people ‘with higher education qualifications than her’.

And it’s sad to know that her situation is definitely not unique, given the number of articles we have seen on the abuse of low-wage workers, ranging from food court cleaners to security guards.

We Are More Than Our Jobs

In today’s society, we tend to measure success with the job title that we hold.

And what you do for a living seems to reflect your level of importance.

To her employers, my mother may just be a domestic cleaner.

And even though she herself pegs her value to her day job, she is so much more than that.

Due to her lack of education, she made sure that her children wouldn’t miss out on any opportunities.

This meant weekly trips to the library for her children, and even art, ballet, and piano lessons.

Despite being blue-collar workers, both she and my dad provided me with an opportunity to graduate from university debt-free, allowing me to have the privilege to focus on other goals as I stepped into the workforce.

She taught me that with grit and determination, you can reach your goals and achieve what you want.

Despite facing such negativity at work, she takes on each day with great positivity and gratitude.

She taught me that having the right attitude gives you power over your own circumstances.

Despite long hours of physically strenuous work, she never fails to show up as a mother, providing the biggest emotional pillar of support for her loved ones.

She taught me to prioritise what’s important to me, and to always make time for these things.

Reminder To Stay Humble and Kind as We Advance Our Careers

Many of us set goals to climb the career ladder, especially when we have our personal finance targets to achieve.

As we rise to positions of power, it is easy to be caught up in the status and money game.

May this be a reminder that while we focus on our career advancement, we shall not forget to stay humble and kind.

And more often than not, one can judge a person’s character by how they treat those with less power than themselves.

This is especially apt today, given how an interview question has recently been taken umbrage by someone who was once a SAF scholar and holds three Master’s degrees…

Or like how Twitter lady has put it across — the cruel and aggressive attitude is a reflection of your behaviour, not mine.

“Do to others as you would have them do to you. Speak to others in the way you’d like them to speak to you. Respect is a two-way street.”

In a World Where You Can Be Anything, Be Kind

“Everyone we cross paths with knows something we don’t.”

Always remember that we only see part of the story of the people we meet.

In this dollars-and-cents world, humility and kindness are the rarest currency that one can have.

Even the world’s richest man, Jeff Bezos has a little story of his own.

When he was 10, he showed his grandparents how smart he was, which upset his grandmother.

His grandfather pulled him aside, and told him:

“Jeff, one day you’ll understand that it’s harder to be kind than clever.’”

Perhaps by being kind to others is when you are truly wealthy.

If you’re enjoying such articles so far, you can now save it to your own feed!