Are Listed Football Clubs Worth Investing In? 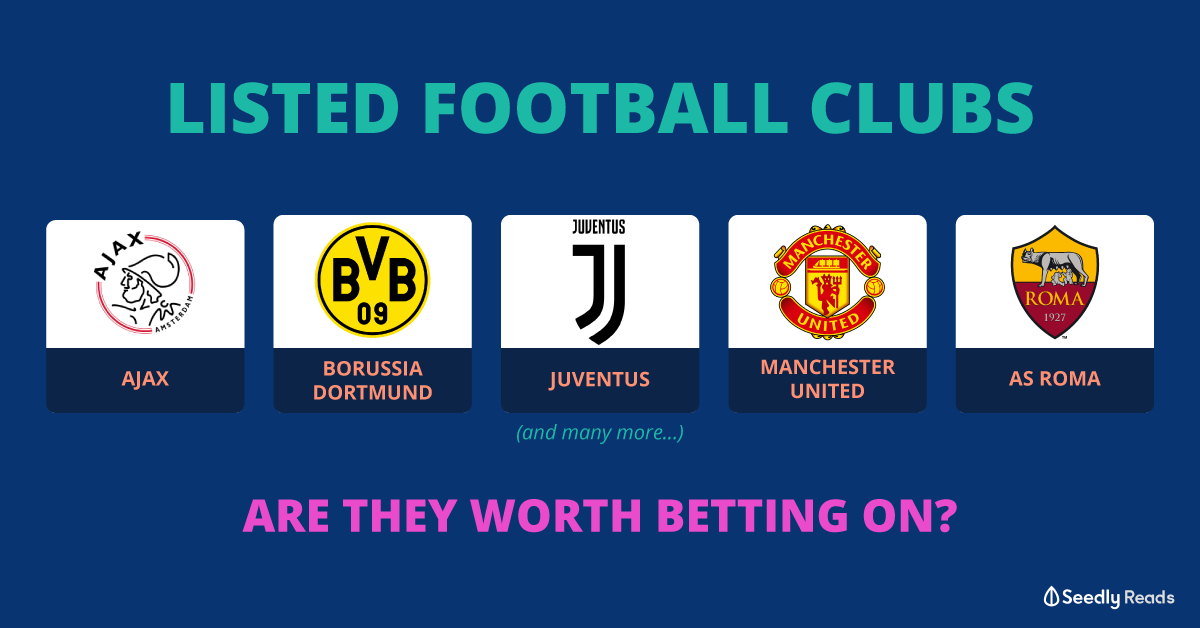 Are Listed Football Clubs Worth Investing In?

That was my reaction when I saw the ‘zig-zag’ third kit from Manchester United, a club I’ve been supporting since I was in Primary 3.

But I may start appreciating the kit after looking at it more and more (this has been the case for many of the past Man Utd jerseys that I thought were ugly initially).

Is it the same line of thought for Manchester United as a stock investment?

Before we dive further into the reasons why, let’s explore the various football clubs listed in the world and how they make money.

How Do Football Clubs Make Money?

Football is a popular sport with a huge following worldwide.

And it’s a major revenue driver in the world of sports.

According to HowMuch (as of 2016), football leagues generated the majority of sporting revenue out of the more popular sports such as American football, baseball and basketball.

Back then, the English Premier League (EPL), the most-watched football league in the world, raked in US$5.3 billion a year.

The money largely comes from TV broadcasting rights, just like many of the other sports.

Most of the money will be distributed evenly to the 20 clubs in England’s top league.

On top of the broadcasting fees from EPL and other competitions that the clubs take part in, football clubs also make money through other avenues such as sponsorship, merchandising, product licensing, and matchday ticketing.

According to Deloitte, the 20 highest-earning football clubs in the world generated a record €9.3 billion (US$11 billion) of combined revenue in 2018/19, an increase of 11% over the previous year.

Listed Football Clubs of the World

However, clubs such as Manchester United, Juventus (ranked 10th), and AS Roma (ranked 16th) are floated on stock exchanges the world over.

The biggest listed club, both in terms of market capitalisation and reach, is Manchester United.

It has a whopping 1.1 billion combined fans and followers worldwide! That means 14% of the world’s population is a Manchester United supporter.

In 2019, it received £627.1 million in total revenue, and most of it came from sponsorship, and retail, merchandising, apparel and products licensing (collectively Manchester United’s Commercial business segment).

Having said that, the segment that has shown growth over the years is the Broadcasting business, which increased by 24% in all since 2017.

Are Football Clubs Worth Putting Our Money Into?

Let’s explore this topic on two fronts: quantitatively and qualitatively.

When we invest in mature businesses, like football clubs, as opposed to growth companies, we want to see the company making profits. Surprisingly, most of the clubs are loss-making on a last twelve months basis. This could be due to the impact from COVID-19.

With football matches suspended from mid-March to mid-June for a couple of leagues, the broadcasting and matchday operations of clubs were likely hit.

For example, Manchester United explained in its 2020 fiscal third-quarter ended 31 March 2020 (emphases are mine):

“Operationally, the impact of the pandemic and measures to prevent further spread continues to disrupt its businesses in a number of ways, most significantly in Broadcasting and Matchday operations. Old Trafford and its flagship Megastore operations have been closed to visitors since 20 March 2020 and Museum, Stadium Tour and Red Café operations have been closed since 17 March 2020. Government imposed restrictions have also resulted in the postponement of the Premier League, UEFA competitions and FA Cup competition since 13 March 2020. Postponement of the Premier League and changes to match scheduling has resulted in a reduction in the total broadcasting revenue expected for the season and has impacted broadcasting revenue during the quarter for matches played to date.”

However, the impact from the coronavirus could be temporary and it would be interesting to watch how the clubs bounce back on this aspect.

Moving on, most of the listed clubs are also in a net debt position, which means that they have more debt than cash on their balance sheets. This is a risky proposition, especially given the economic headwinds that we are seeing.

Football clubs also need to spend huge amounts of cash buying and retaining players to have a shot at the bagging the trophies, unless they have a strong youth academy to nurture young players and have a steady stream of talent coming through.

To make things worse, the listed clubs are also not generating free cash flow, which seems like a widespread issue for them.

Free cash flow is what a company can use to reinvest into its own business, acquire other businesses, pay dividends to its shareholders, buy back its own shares, or pay off its borrowings.

With a lack of free cash flow, it’s not surprising that the clubs have to borrow money to fund their operations.

Looking at the financial metrics of the clubs alone, they don’t look like great investments.

Next, let’s investigate them qualitatively.

Most of a club’s fortunes hinge on it being popular and relevant among its legion of fans.

If a club doesn’t perform well in its league or at the top competitions like the UEFA Champions League or Europa League (if they qualify for them), its merchandising, broadcasting, and matchday revenues could be hit.

This is what Manchester United had to say about the risks surrounding its first team performance in its 2019 annual report (emphases are mine):

Overall, it’s very hard to forecast how football clubs will perform on the field over the long-term. The tides can turn anytime, just look at what happened to Manchester United after Sir Alex Ferguson left the club as manager.

In contrast, it’s easier to understand how companies involved in the digital economy, for example, would fare over the long run.

It’s a very simplistic comparison, but when it comes to investing, we have to ensure that the stocks we invest in have a long runway for growth, on top of having growing financials and predictable businesses.

To sum it all up, let’s look at Manchester United’s share price performance over the long-term.

It returned just 17% in all over the last eight-plus years. Comparatively, the S&P 500 index rose 137% during the same time frame.

Therefore, there seem to be better investment opportunities outside of football clubs, than within.

Why not check out SeedlyCommunity and participate in the lively discussion regarding stocks!