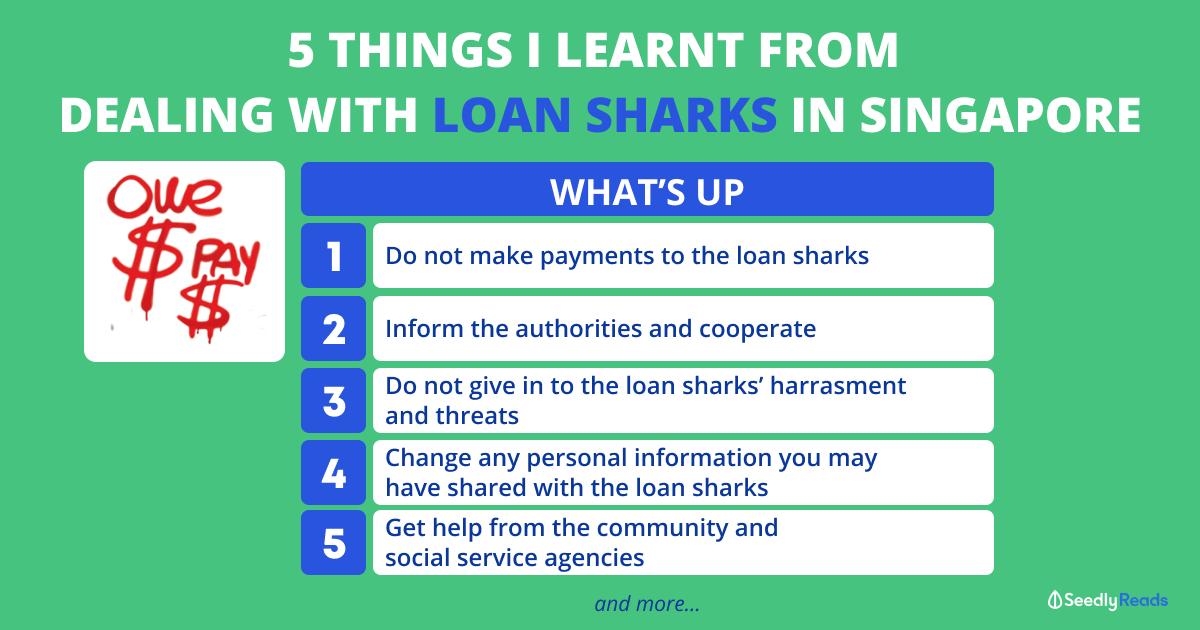 Recently, I reconnected with an old friend of mine over a hearty mookata dinner.

During the conversation, my friend recounted how he and his family were the victims of loan shark harassment recently.

This sent my Seedly writer sense tingling, and I began asking him more and more questions about his ordeal.

With his blessing, I am now writing this guide based on his personal experience and wisdom from the experts to help you, or any others you might know the deal with loan shark harassment.

Here are five things you need to know about dealing with loan shark harassment.

TL;DR: How to Solve Loan Shark Problems in Singapore

However, if find yourself this situation, know that you are not alone.

According to Channel News Asia (CNA), almost 300 people were arrested for loan shark/unlicensed moneylender activities in Singapore in early September this year.

About two months earlier, 237 people, aged 13 to 77, were arrested for their involvement in loan shark activities.

Even during Circuit Breaker, the loan sharks got creative, sending their debtors unwanted food delivery orders worth hundreds of dollars. They even had their runners pose as stay-home notice enforcers to continue harassing their debtors.

From the above incidents and arrests, you can see that the loan shark problem is very prevalent in Singapore.

So this is what happened with my friend and his father, who I shall call Xiao Feng and Uncle Feng.

A ‘friend’ of his father’s (let’s call him John) had betrayed Uncle Feng’s trust and made his Uncle Feng an unwilling guarantor for his loan shark loan, with Uncle Feng’s National Registration Identity Card (NRIC) and handphone number.

Thankfully, the amount borrowed was not too astronomical as this John only borrowed $5,000 in total.

But, this was how the nightmare started, as John had borrowed $1,000 from five different loan sharks.

Pro-Tip: All licensed moneylenders are regulated by the Ministry of Law and are issued licenses. If the moneylender you are borrowing from does not turn up in this register, has no license number and/or businesses address, almost ten times out of ten you are dealing with a loan shark.

These moneylenders also use SMS, messaging platforms like WhatsApp, flyers and emails to advertise their services.

These advertisements are more often than not sent by loan sharks. Do not ever reply to these messages. Instead, you should block and report the number as spam.

Also, another important thing you can do is to be very careful with giving out personal information like your NRIC, SingPass or bank account details to anyone.

1. Do Not Make Payments to The Loan Shark

Xiao Feng recounted that he and Uncle Feng made a big mistake.

After a week of not responding to the loan sharks, they actually sent them pictures of their house door and informed them that the total loan amount had gone up from $5,000 to $7,500.

Tired with the constant harassment over SMS and WhatsApp, they paid off the loan sharks by transferring money into their bank accounts.

After paying off the loan sharks, Uncle Feng did not hear from them for a while.

But, it was the calm before the storm, as barely a week later, the loan sharks claimed that they have not received any money and begin harassing them again.

Throughout, Uncle Feng was also receiving messages from other loan sharks offering loans. This is because these loan sharks tend to share victims’ numbers with a network of loan sharks.

This often creates a vicious cycle, as the desperate victims may borrow from one shark to pay off another and end up being ‘eaten’ by a whole bunch of sharks.

As the harassment did not stop, Uncle Feng went to the police.

2. Inform The Authorities And Cooperate

Uncle Feng went to the police and reported the case of loan-shark harassment at a nearby neighbourhood police post. 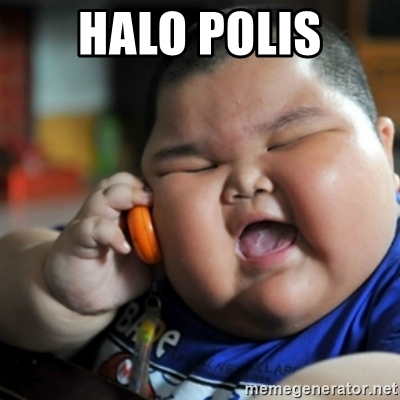 Another option will be to report the loan shark on the Singapore Police Force i-Witness reporting page.

Upon making the report, the police advised them to stop making further payments to the loan sharks and reassured them that they would patrol the block more frequently.

In addition, you should cooperate with the police fully and do not in any circumstances agree to do anything for the loan sharks.

There are two main offences you might commit if you work for loan sharks under the Moneylenders’ Act (Revised Edition 2010):

For assisting in the business of UML:

This includes activities like using your bank account or ATM card to facilitate the business of unlicensed moneylending (UML) carried out by the loan sharks,

For acting on behalf of an UML to commit harassment:

This includes activities like working for loan sharks as a runner to harass people with the tactics detailed below.

To play safe, just do not agree to doing anything for loan sharks as you might be unwittingly committing a crime.

3. Do Not Give In To The Loan Sharks’ Harassment and Threats

Now that you have reported to the authorities, you should not respond to their harassment or threats.

But, I would think that this is easier said that done. The loan sharks in Singapore employ a range of scare tactics to instil fear, shame and guilt into their victims.

Also, they will not easily give up and will try and squeeze as much money as possible from their victims.

The tactics loan sharks employ include but are not limited to:

Another thing that might help will be to install a security camera at your house to monitor any suspicious loan shark activity and possibly help the police in their investigation.

You might also want to buy a bolt cutter to place in your home to cut locks just in case.

It is not going to be easy but know this. Since the loan sharks are carrying out illegal money lending, they do not have any right to receive payments or lend money.

Thus, I would recommend you to stay strong and ride out the harassment and threats.

You should also cooperate with the police fully for you and your family’s safety.

If possible, you can consider moving out of your house temporarily.

Xiao Feng and Uncle Feng moved out of their house and stayed with their relatives for about two months.

Luckily, the loan sharks gave up and left them alone. But as I said, it could be just luck.

The next thing to do will be to change all your personal information and passwords that might have been compromised.

This is for your own safety and prevents further harassment on your home.

5. Get Help From The Community And Social Service Agencies

You can like pages like the Facebook page Singapore Anti Loanshark, or ask a question anonymously on the Seedly Community if you have any questions or need support. 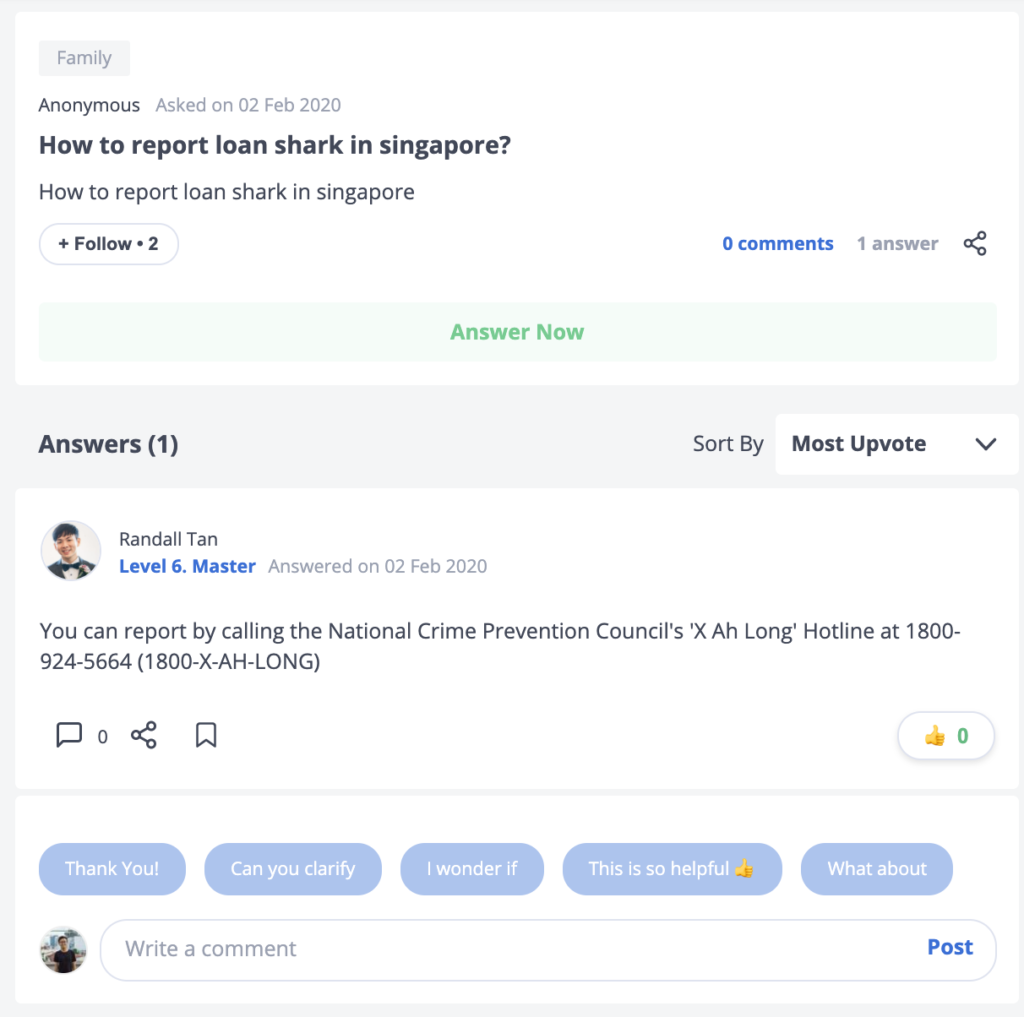 There are also many social service organisations that provide credit counselling and can help you with your loan shark problems.