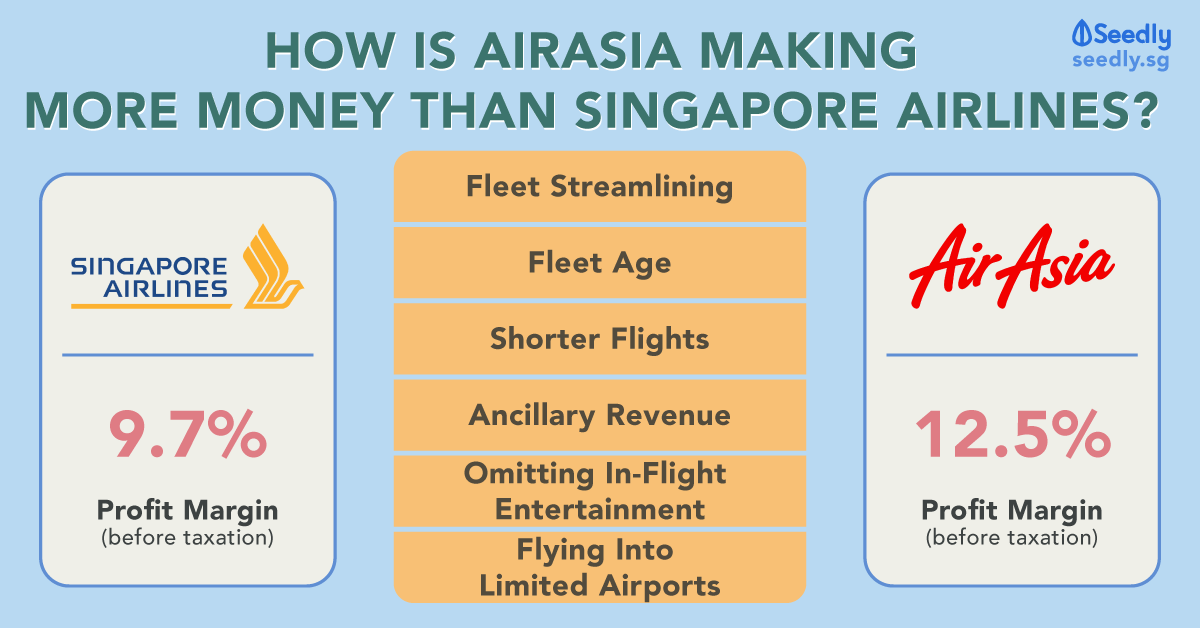 To be honest, I’ve never really had a lot of experience flying with full service carriers (FSC) like Singapore Airlines.

On the few occasions I did, I really enjoyed the facilities, but I’m sure my bank account was going to kill me.

And you must be thinking why low cost carriers (LCC), a.k.a budget airlines are making more profit than their full service counterparts?

I mean their flights are constantly so expensive, so shouldn’t they be making a lot more money?

We’re about to find out more, but let’s first compare the financial statements of AirAsia Group and Singapore Airlines to get a clearer picture.

How Much Are AirAsia and Singapore Airlines Earning?

You’re not wrong to say that Singapore Airlines definitely make more money, but don’t forget, every business will have expenditure well.

Also, a common question you’ll hear when discussing businesses is whether it’s profitable.

Drawing figures from both carriers financial statements, we’ve compared their revenue and profits for the most recent financial year.

Do note that the figures for AirAsia were converted from Malaysian Ringgit, with SGD 1 : MYR 3.

Sorry, aerophiles and aviation enthusiasts, this might upset you a little.

Like many low cost carriers (LCC), AirAsia chose to limit its fleet to a certain family of aeroplanes only, namely the Airbus A320 and the Boeing 737.

On the other hand, Singapore Airlines has more than 5 different families of aircraft in its fleet.

Apart from the obvious acquisition cost, there are also other costs involved in having different aeroplanes to make up an impressive fleet.

By streamlining its fleet, AirAsia saves a significant amount of money on training costs, which contributes to their profit margin.

Another reason why LCCs can generate more profits is the length of use for their aircraft.

Singapore Airlines has one of the youngest fleets in the world, with a fleet age of 6.9 years.

That’s even faster than how fast we change cars, guys.

I know, the table above shows that AirAsia’s and Scoot’s fleets are actually younger than Singapore Airlines.

But it’s important to note that both airlines were expanding rapidly in the recent year, which means they’ll have to acquire new aeroplanes, therefore, lowering the fleet age.

Even though LCCs having older fleets used to be the general trend, they seem to be moving towards younger fleets to improve efficiencies and reliability.

I’m not sure about you, but sometimes I get disappointed when an LCC doesn’t fly to the destination I have in mind.

Yea, I’m greedy and I want the best of everything…

Even though it’s not something you’ll observe directly, fuel costs make up one of the biggest expenditure for any carrier.

For example, a long haul flight from Los Angeles to Tokyo is estimated to cost an airline $19,000 for fuel while a short flight from Chicago O’Hare to Miami will likely cost the airlines $4,000 instead.

The rest is quite simple, really.

With shorter flights, LCCs like AirAsia, reduce their fuel cost, hence providing them with a higher profit margin.

You know how we always get excited when we see flight promotions boasting super cheap flights, but then once you’ve added your baggage fees and whatnot, it’s actually not that cheap?

These add-ons contribute to the airlines’ ancillary revenue, coming from everything except the flight ticket prices.

Just look at the top airlines for ancillary revenue, a whopping 27% – 46% of their total revenue!

I remember requesting for a blanket on a trip to Zhengzhou and it was going to cost me $15! Not surprisingly, I chose to freeze.

So all the add-ons you have, like baggage fees, in-flight meals and beverages, seat selections contribute to bringing more revenue for LCCs.

Yes, even insurance, car and hotel bookings are part of it!

The lack of in-flight entertainment never really bothered me since I can easily be reading on my Kindle or watching shows using my phone.

That’s a good thing for LCCs since it means there is one less facility that they need to run and maintain!

It never occurred to you that there is a team responsible for curating the programmes available in your in-flight entertainment system, right?

Not just that, FSCs will also have to pay for the respective licenses to provide you with the latest or popular movies and show.

Airlines have been found to spend upwards of $20 million per year on the content for their in-flight entertainment alone.

Can you begin to imagine how much money LCCs like AirAsia save just by omitting in-flight entertainment?

I believe another source of frustration when booking with LCCs come from the limited airports that they fly to.

Typically, LCCs fly into low cost or secondary airports that are not as busy as the major primary airports, and this greatly reduces the carriers’ operating cost.

With secondary airports being less congested, LCCs potentially have a shorter turnaround time, which means they might be able to squeeze in one more flight!

Clearly, running an airline doesn’t seem to be that profitable after all.

Like Sir Richard Branson once said, if you want to be a Millionaire, start with a billion dollars and launch a new airline!