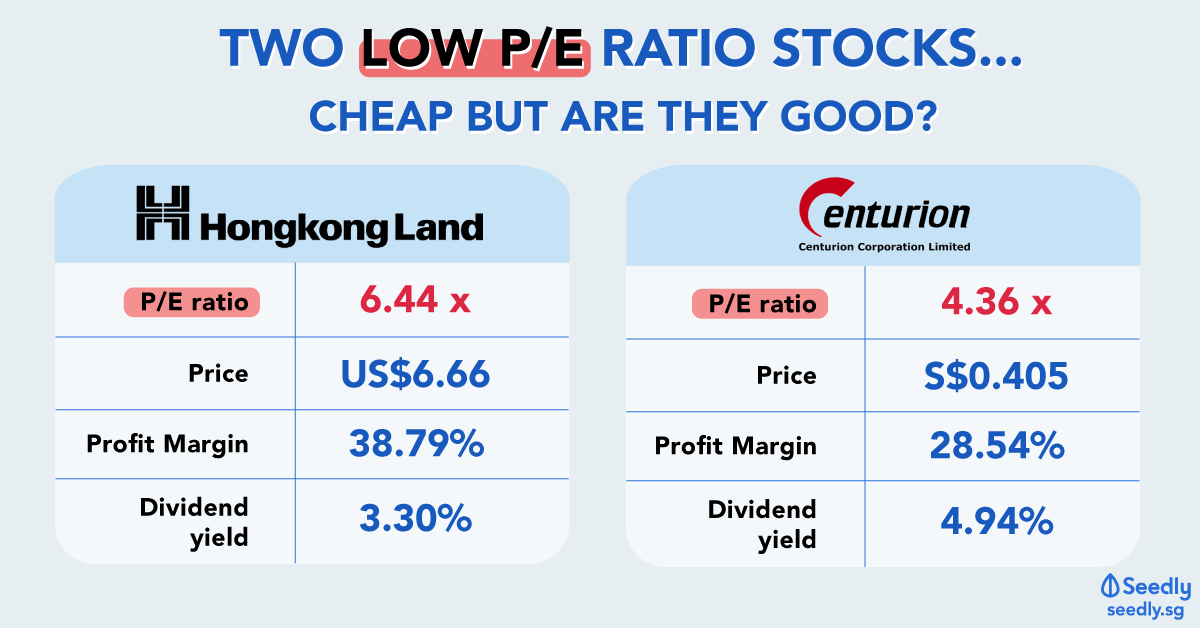 I was looking through the STI component stocks and I stumbled upon a stock that has a P/E ratio of only 6.4, which got me like,

“Whoa, a low P/E ratio stock on the Straits Times Index… Should I buy?”

Questions like “What is a low P/E ratio?” may ensue. It’s dependent on the industry, but also on your own take as well. What is low to me may not be for you. But as a benchmark, I am comparing it with the Straits Times Index. According to Bloomberg, the STI stocks is at a P/E ratio of 13.7 now.

The P/E Ratio or Price-to-Earnings Ratio is a way to value a company using its share price relative to every $1 of earnings the company generates.

Simply put, a low P/E ratio means that a company’s stocks are “cheaper“. More on that below.

It piqued my interest and I went to read on more about the stock in question: Hongkong Land Holdings Limited (SGX: H78). To take it even further, I decided to compare it with another company with a low P/E ratio in the property development sector to see how they are faring. That company would be Centurion Corporation Limited (SGX: OU8).

Hongkong Land’s properties are mainly in Hong Kong, with some percentage of properties in Singapore and other parts of Southeast Asia.

Some of their properties which you may be familiar with include Marina Bay Financial Centre, One Raffles Quay, and One Raffles Link.

“It’s not just about providing a roof and four walls for our residents – it’s about people management with a heart.” — Centurion CEO Kong Chee Min

Centurion’s assets are in Singapore, Australia, the United Kingdom, the United States, and South Korea. As of 2018, the company has a portfolio of 28 assets.

Their accommodation assets are managed under the brands: Westlite and dwell.

It’s worth noting that even though both companies develop and manage properties, their focus are in different sectors.

Market Capitalisation refers to the total market value of a listed company’s outstanding shares. These two companies have different market caps – Hongkong Land is around 45x as big as Centurion.

P/E and P/B ratios are metrics to value a company. They are based on market sentiments and show how much the market is willing to pay for the company’s shares.

Based on the P/E ratio, Centurion Corp seems like the cheaper company to purchase as the current prices are lower for each dollar they generate.

However, if we look at the P/B ratio, Hongkong Land seems cheaper as the current prices are lower for each dollar of their equity value.

The P/E ratios of these two companies are indeed low… But more importantly, are they undervalued?

Using the P/E ratio in my initial evaluation, the stock of both companies seem to be cheap. BUT a low or high P/E ratio is not conclusive of whether a stock is a good or a bad buy. We always look at the other aspects of the company as well as the other financial metrics in order to get a better picture.

Interested to find out more about P/B and P/E ratios? Check out – How To Read Financial Ratios: P/B, P/E Ratio and Liquidity Ratios

*I used the companies’ underlying profit rather than total profit.

That’s because underlying profit is derived from business performance, and not from changes in fair value of their investment properties. Revaluation gains/losses can fluctuate a lot yearly, and looking at the underlying profit can better show the profits earned from their core business.

The underlying profit margin for Hongkong Land Holdings is higher than Centurion Corp. This means that they are better at reducing their expenses, which allows them to keep a higher percentage of their revenue.

The Debt/Equity (D/E) Ratio of Centurion Corp is astonishingly high due to their long-term borrowings amounting to $695,403,000. This is higher than their total equity, which naturally pushed the ratio up. They are highly leveraged, which means it is more dangerous than that of Hongkong Land as a high D/E ratio would bring about the concerns that the company may not be able to pay off its debts in time.

Interest Coverage Ratio shows how the company’s earnings (EBIT) is able to meet its interest expenses.

Overall for these financial ratios, Hongkong Land is doing better in all the above-discussed aspects.

Interested to find out more about Quick Ratio, D/E and Interest Coverage Ratios? Check out – How To Read Financial Ratios: P/B, P/E Ratio and Liquidity Ratios

Comparing between both companies, Centurion Corp is doing better than Hongkong Land in terms of efficiency.

However, the overall efficiency ratios are below 10%, which are still pretty bad. The returns they are getting are low which means that they are inefficient in utilising their equity, assets and invested capital.

This is something which investors are very concerned about, right?

As an investor, it’s obvious that you’ll want a high dividend yield. In this aspect, at the current share prices, Centurion Corp seems to be giving a higher percentage of dividends at 4.94%.

The Dividend Payout Ratio shows you how much of the profits are being paid out as dividends. This is also an indication of how much is paid out to shareholders and how much is reinvested back into the company, which also shows the sustainability of dividends paid in the longer term.

Centurion Corp has a lower dividend payout ratio, which means they reinvest more into growing their company, making their dividends paid more sustainable.

Interested to find out more about profitability ratios and dividend yields? Check out – How To Read Financial Ratios: Profitability & Returns

Hongkong Land‘s profit margin is significantly higher than Centurion’s. Their payout ratio is higher too (good and bad). Good, because as investors we get higher dividends. But bad, because higher dividends paid out means less are reinvested back to the company. I mean you can’t have the pie and eat it, and the payout ratio is sustainable still. Furthermore, Hongkong Land also has many projects scheduled to be completed this year and subsequent years which would mean greater revenue too.

Centurion Corp: In Singapore and the other parts of Asia that they have assets in, there is a high reliance on foreign workers and this will drive the demand for such accommodations. For the front of student accommodation, UK is a key market for Centurion as they are facing an undersupply of beds, with full-time students outnumbering bed space by a ratio of 3:1. Their 2019 first-quarter profits dropped 13.7% because they are unable to cut costs. Despite the high demand, however, I am critical of the 140% D/E ratio, although most of it is from long term loans rather than short term (i.e they have more time to pay them off). That depends on whether you feel the risk is justified by the higher dividend yield (here I am just comparing dividends and not capital gains).

If you’re interested in understanding more about each of these companies, we have a more in-depth analysis of these stocks too.

Or if you have other stocks that you’re interested in, or any personal finance related questions really, you can ask the community on Seedly Q&A!