How to Make Money on YouTube: Could It Replace Your Full-Time Job? 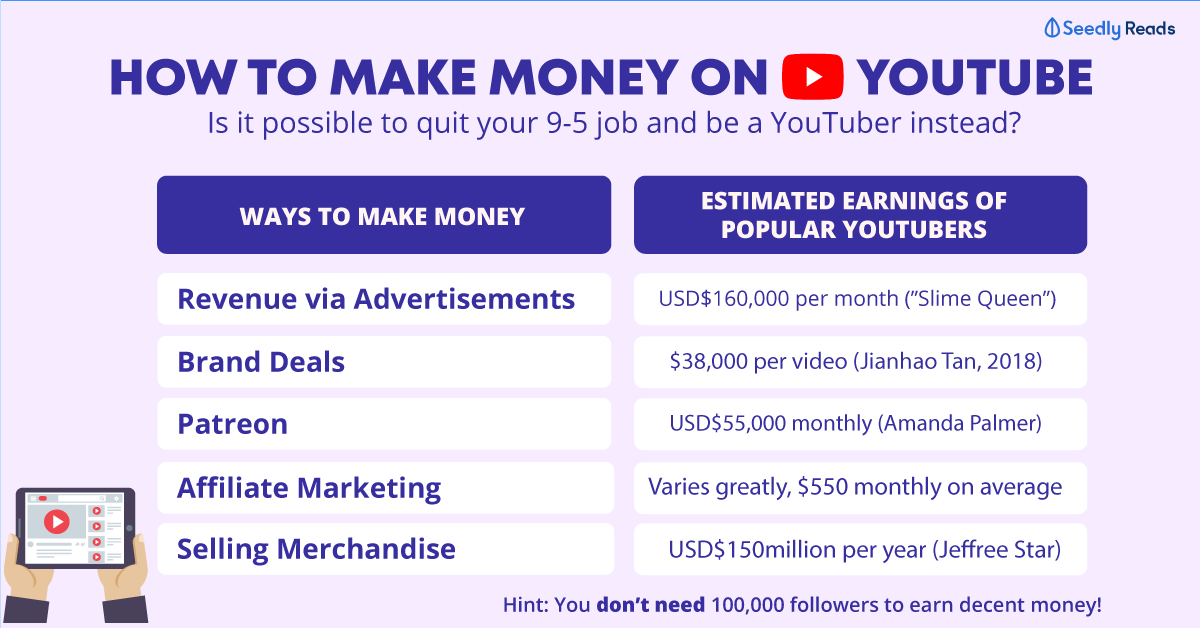 How to Make Money on YouTube: Could It Replace Your Full-Time Job?

They started devouring the first dish, while commenting on how good the food was.

What seemed like a video of a regular food review could rake up hundreds and thousands of views.

In this day and age, Youtube has been a platform that is on the rise, where some have even turned it into lucrative businesses.

Just in Singapore, homegrown brands have been raking millions in yearly revenue in this field.

JianHao Tan (otherwise known as Titan Digital Media) has been coined as one of the ‘Big Fours‘ of Singapore Youtube scene (which also consists of Night Owl Cinematics, Wah! Banana, and Clicknetwork), and has 4.19million subscribers on Youtube.

Popular channels like his are known to have advertising and marketing rates of $30,000 or more for a branded video.

This means that the production of one video like this could be an annual salary of a regular salaryman. 🤯

With many popular YouTube channels centering topics which seem like usual, everyday events (unboxing purchases, reviewing food, lifestyle vlogs), it almost seemed effortless for some of these channels to be raking big money.

It almost feels like the only thing one needed to do was to pick up the camera and start recording daily activities and events.

Is it possible for a regular person like you or me to make a living out of YouTube?

How do Youtubers even… make money?

Someone who was interested asked this question on Seedly, and there were great answers to it.

We did a general breakdown of how money could be earned on YouTube.

TL;DR How to Make Money on YouTube: Could It Replace Your Full-Time Job?

Huge Disclaimer: There is no hard and fast rule when it comes to how much you could earn from YouTube.

The amount of money that could be earned by each method varies greatly based on the type of content the YouTube channel creates, the length of videos, types of brand sponsorships, etc.

To qualify and even begin to start earning money on YouTube, you’re required to join the YouTube Partner Program (YPP), which lets creators monetize their videos.

In order to qualify for the YPP, creators need to have at least 4,000 valid watch hours, and at least 1,000 subscribers in the past 12 months.

This means that you have to start by building an audience first.

To gain an audience, you need to produce consistent content that people enjoy.

It is therefore important to find your area of interest, and build your audience from there.

The first revenue stream that is the most common would be through viewership.

After joining the YPP and becoming a YouTube Partner, you can start monetizing videos through Google Adsense.

This is through the ads which we commonly see before, or during videos.

Cost per thousand impressions (CPM), as its name suggests, is an advertisement fee based on the number of impressions.

For YouTube, CPM is calculated based on an algorithm, which could vary based on different factors – such as the geographical location of your viewers, your viewers’ age group, or genre of your videos.

If you could see above, you would be able to see that the amount of money you could earn from a video is not solely based on your view count.

The video on the left with 370,000 views paid more than the one on the right which had 2.2million views, because the left had a higher CPM.

In short, the amount of money you can make from a video is:

Also, YouTube also takes almost half (~45%) of your CPM revenue.

In short, it is difficult to determine EXACTLY how much you could earn with 100,000 views, as there is no real ‘right’ answer.

However, a rough, reasonable estimate (as seen from a few YouTubers) could be in the ranges of low hundreds.

In addition, with the advent of ad blockers, it is getting more difficult to earn revenue from this aspect.

One area that most YouTubers with a decent following earn from is through brand deals or sponsorships.

Brand deals are usually what pays well, allowing these YouTubers to have a more decent and sustainable income.

Today, with a following of more than 4 million subscribers, you can imagine how much these creators are raking from brand deals.

“What if I’m not thaaat popular?”

For someone with a relatively smaller following, not all hope is lost.

If you have a channel that focuses on certain niches (such as gaming, technology, art, or lifestyle) and have a sizeable following, it is a possibility for endorsements to come streaming in.

In general, brand deals are usually charged higher for niche skills, as compared to a general one.

In addition, there is a Social Bluebook website that allows creators to get an estimated price valuation (in USD) of different brand deals.

For smaller YouTube channels, another option to look into for earning money would be through Patreon.

Patreon is a site that offers fans to pay a monthly subscription fee, to receive extras from their favourite creators.

For instance, YouTubers can offer different tiers of subscriptions, such as $5 for early access to videos, $10 for early access and behind-the-scenes clips, and $15 for additional fan-exclusive videos.

Another common technique used to make money would be through affiliate marketing.

Affiliate marketing is a type of marketing where an online retailer pays a commission to an external website for sales generated from this referral.

For YouTube, some common online retailers that Singapore creators work with for affiliate marketing would be Amazon and Qoo10.

With the huge range of products these sites offer, creators would be able to choose any products which are in line with their channel and add them into their video descriptions, while maintaining coherence to their content.

For instance, a YouTuber who frequently reviews technological products have the potential to make money through affiliate marketing, by leaving links of new tech products in the description box.

One thing to note is that each successful referral doesn’t earn much, usually below $1.

However, it could potentially be a source of recurring income, where only a one-time effort is required.

Once you have garnered your following, another option to have is to start your own product line.

Karina Garcia, a 25-year-old YouTuber who is known as the internet’s “Slime Queen” was a former waitress who became a millionaire through her slime-making business which started from YouTube.

After gaining a substantial following on YouTube, she has since branched out to having her own slime product line, with her business earning her more than USD$2million per year.

In the local context, Night Owl Cinematics has recently launched their merchandise too.

Making Money on YouTube: Could It Replace Your Full-Time Job?

As you could already tell, being a YouTuber is more than just taking spontaneous videos and uploading them.

For YouTube to be a sustainable career, it is important to constantly ideate and regularly come up with refreshing content to continually engage and retain audiences.

It is evident that being a successful YouTuber is no longer just about the number of views, but the other income streams that could arise from having a substantial following that has been built and grown over the years.

That being said, the beauty of YouTube is the low entry point it requires.

Literally anyone with an idea could start a channel.

Therefore, if you’re someone looking to turn your hobby into a side hustle and have creative ideas that could possibly lead somewhere, you might just have the opportunity to be your own version of “Slime Queen”.