On March 30, the Monetary Authority of Singapore (MAS) dropped its Monday’s Monetary Policy Statement (MPS) announcing an easing of monetary policy in light of the impact of the global COVID-19 pandemic.

This MPS which is usually announced two times a year in April and October was announced ahead of time this year.

MAS will make adjustments to S$NEER in a bid to manage the Singapore Dollar (SGD) and stabilise prices.

If all this sounds like Greek to you, you’re not alone.

We will be breaking down everything the jargon to help you gain a better understanding of this situation and its impact on Singaporeans and the economy.

TL;DR: All You Need to Know About S$NEER, Why it Matters to Singapore’s Economy and MAS’ Latest Measures

This rate is an unadjusted weighted average rate at which the Singapore dollar exchanges for a basket of currencies from Singapore’s major trading partners and competitors.

The composition of the currencies in this basket is weighted according to Singapore’s trade with that country.

MAS revises the basket of currencies is regularly to keep up with the changes in trade patterns.

However, the exact composition of this is undisclosed.

Why Does Singapore Use S$NEER  as a Monetary Policy Tool?

When it comes to monetary policy, most countries around the world utilise an interest rate based policy; adjusting their interest rate up or down based on their economic outlook.

On the other hand, MAS uses S$NEER and manages the currency rate as a monetary policy tool instead.

This is due to the fact that Singapore’s economy is small and open.

The country’s exports of goods and services account for more than 300% of her Gross Domestic Product (GDP) with about 40 cents of every dollar spent in Singapore on imports.

Thus, it is a far more efficient tool for maintaining price stability which is in turn crucial to our economic growth.

The S$NEER, directly and indirectly, impacts inflation and a broad range of prices in Singapore’s economy.

How MAS Manages The S$NEER

The SGD is managed by MAS, Singapore’s central bank and financial regulatory authority.

MAS uses a managed float system for the Singapore dollar called the S$NEER.

This trade-weighted exchange rate of the SGD is allowed to go up and down within a policy band that reviewed twice a year in April and October.

The rate is allowed to appreciate (go up) or depreciate (go down) within this band based on factors such as global inflation and domestic price pressures.

MAS will intervene by buying up or selling SGD when the value of SGD exceeds this band.

For the S$NEER, the SGD will be indicated in blue and the policy band in red.

The policy band consisting of two parallel lines that are sloping upwards.

Changing the Slope of The Band The diagram above represents MAS reducing the slope to make the SGD depreciate when our economy weakens to increase the competitiveness of our exports.

When our economy is doing well, MAS will allow SGD to appreciate every year to combat imported inflation.

Shifting The Centre of the Band 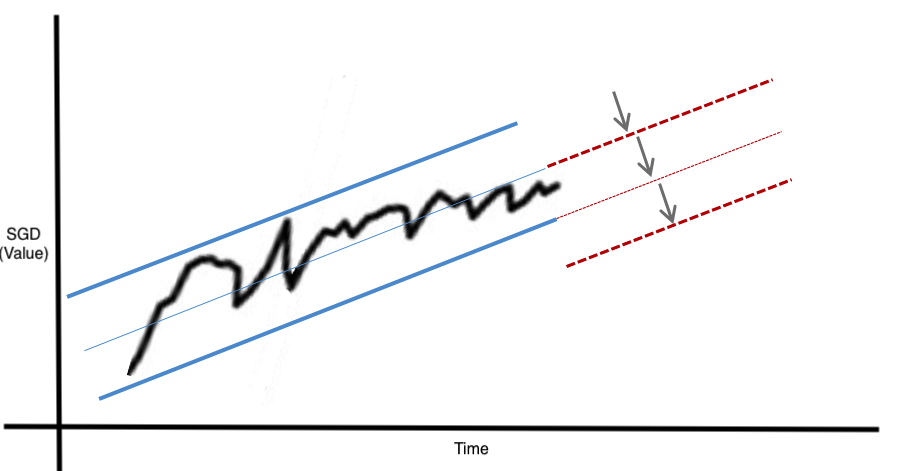 This is the go-to SGD devaluation method used by MAS when faced with tough economic challenges.

MAS will buy up SGD so that the currency will depreciate and make our exports more price competitive (i.e. cheaper to the world).

This was last done during the Global Financial Crisis in 2009.

Changing The Width of the Band

The last method that MAS uses to manage the exchange rate is to widen the width of the band to accommodate the increased volatility in the Foreign Exchange (FX) market. This is to ensure that MAS does not need to intervene so much to manage the S$NEER when markets fluctuate wildly due to world events.

On Monday (30 Mar) MAS announced that they will ‘“MAS will adopt a zero per cent per annum rate of appreciation of the policy band starting at the lower prevailing level of the S$NEER.”

MAS will flatten the slope of the S$NEER to zero. They have not done this since Oct 2017

They will also lower the mid-point of the policy band, an action not seen since the global financial crisis in April 2009.

The width of the band was left untouched.

MAS is also forecasting that Singapore’s economy will enter a recession this year with GDP growth projected at −4% to −1%. This new forecast is worse than the previously held predicted range of -0.5% to 1.5%

Core inflation, headline or all-items inflation forecast is slashed to between -1% and 0.

In other words, MAS is taking steps to keep domestic inflation in check by affirming the S$NEER at the current depreciated levels.

MAS is also looking to ensure that there isn’t excessive volatility in the value of SGD with the S$NEER.

How This Will Impact Singaporeans

Effect of SGD Depreciation on Investments

Singaporeans holding foreign stocks will have to take note of this and currency conversion when they receive dividends and sell their shares in foreign currency.

This is also based on the assumption that the SGD continues depreciating more than the foreign currency.

With a weaker SGD, the cost of imported manufacturing inputs and consumer goods will be more expensive.

Singapore’s exports will then become more affordable for other countries making them more price competitive.

MAS latest decision acts as a complement to fiscal policy like the Resilience Budget. to which will remain the key form of support for the economy during this difficult time.

This was after it went up to 1.4217 following MAS’ announcement.

There you have it all you need to know about S$NEER and MAS Exchange Rate Monetary Policy.

If you have any questions about this or the Resilience Budget, feel free to ask our friendly and knowledgable Seedly Community!