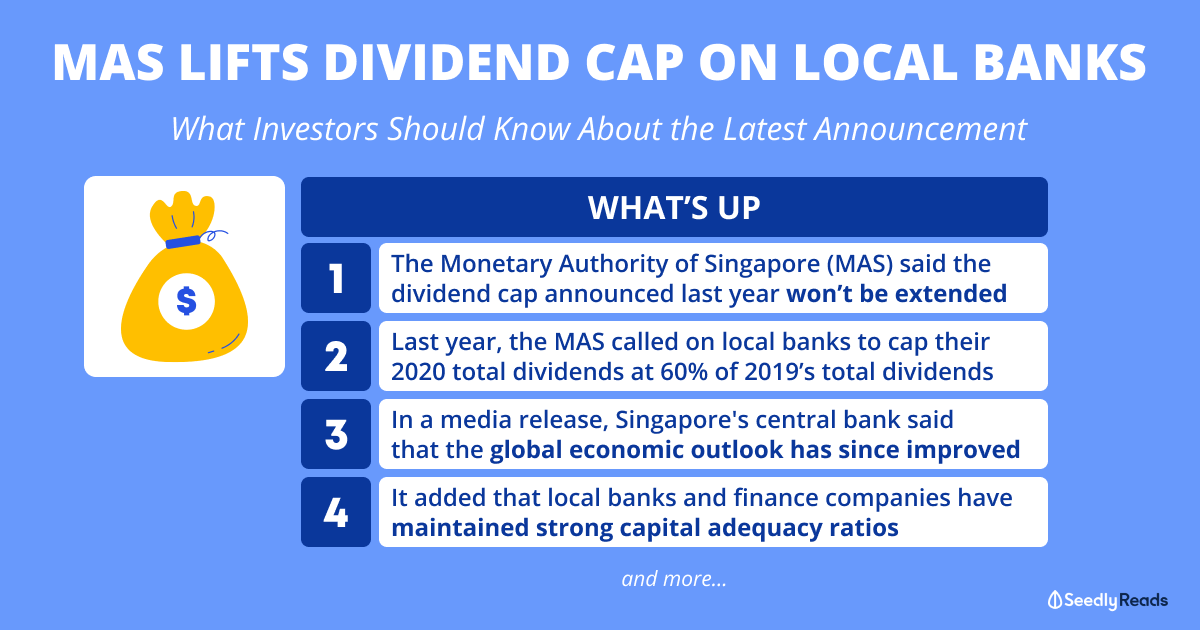 The Monetary Authority of Singapore (MAS) announced on 28 July that the dividend restrictions on banks and finance companies headquartered in Singapore will not be extended.

Around a year ago, the MAS called on Singapore-listed banks and finance companies to cap their 2020 total dividends per share at 60% of 2019’s total dividends (more about that announcement in the original article below).

In a media release, Singapore’s central bank said that the global economic outlook has since improved.

Even though some uncertainties remain, Singapore’s economy is expected to continue recovering, given strengthening global demand and progress in our vaccination programme.

MAS further added that local banks and finance companies have maintained strong capital adequacy ratios and continued to meet the credit needs of individuals and businesses, despite higher levels of provisioning made during the pandemic.

According to the central bank’s latest stress tests, the ratios are projected to “remain resilient even under an adverse macroeconomic scenario”.

(Note: The article below was originally published on 30 July 2020)

It looks like the market is reacting to an announcement made by the Monetary Authority of Singapore (MAS) yesterday.

But was the announcement about?

More importantly, are there any implications for investors? 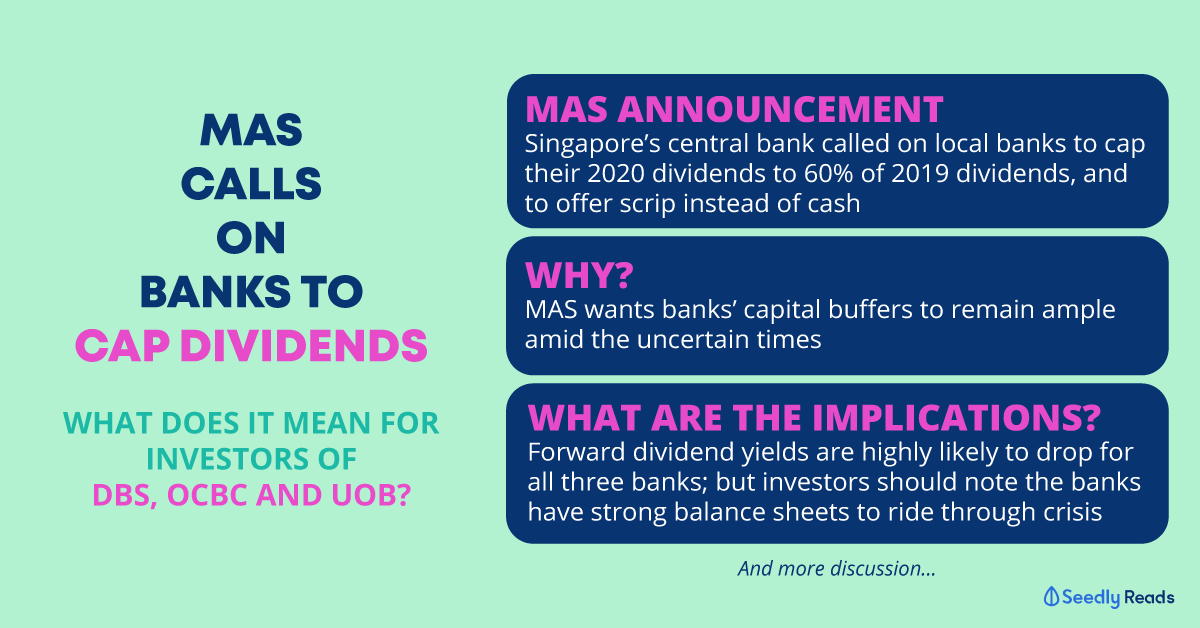 Here’s a summary of the article for you:

What Did MAS Announce?

In a somewhat unexpected move, Singapore’s central bank has called on banks headquartered here to cap their total dividends per share for 2020 at 60% of last year’s dividends.

It has also asked the banks to offer shareholders the option of receiving their 2020 dividends in scrip (in the form of shares) instead of cash.

If a bank has already paid out interim dividends for the 2020 first-quarter, the 60% dividend restriction and the offering of dividends in scrip will be extended for an additional quarter until the 2021 first-quarter.

The MAS explained that even though the capital positions of the local banks are strong, the dividend restrictions are a “pre-emptive measure to bolster their resilience and capacity to support lending to businesses and individuals through an uncertain period ahead for our economy”.

In a media release, Ravi Menon, MAS’ managing director, commented (emphases are mine):

“We are fortunate that banks in Singapore entered the COVID-19 pandemic with strong capital positions. All the same, MAS wants to ensure the banks’ capital buffers remain ample in the face of significant uncertainties ahead, so that they can sustain lending to the economy. We have carefully calibrated the restriction on dividends, taking into account the needs of investors who may rely on this income.”

According to a news report by TODAYOnline, all three banks have said that they will follow MAS’ directive.

Only DBS has made an official announcement to the Singapore Exchange following the MAS call, as of the time of writing.

What Did DBS Say?

Singapore’s largest bank DBS said that it views MAS’ restriction as a pre-emptive measure that is consistent with its well-known customary prudence.

However, MAS also recognises the interests of shareholders as the restriction is not as drastic as some other countries.

DBS revealed that the cap restricts its cumulative dividends to 72 cents per share for the next four quarters starting from the 2020 second-quarter, or 18 cents per quarter.

The dividends will be subject to its board’s approval, as usual.

DBS ended by saying its capital and liquidity are well above regulatory requirements and its balance sheet is also robust.

For its 2020 first-quarter, DBS has already paid out a dividend of 33 cents and is the only bank paying quarterly dividends.

How Would DBS, OCBC and UOB’s Dividends Look Like in 2020?

Here’s a table showing the three banks’ 2019 dividends and what their 2020 dividends will look like following MAS’ cap:

How About Their Dividend Yields At Current Share Prices?

Now, let’s look at how the dividend yields from DBS, OCBC, and UOB look like at the 60%-capped dividend for 2020:

Looking at it, the banks’ forward dividend yields don’t look that shabby after all.

Having said that, it’s worth mentioning again that OCBC and UOB have yet to announce how their dividend payments will look like, unlike DBS.

I’m not worried as an investor following MAS’ call.

All three banks are well-capitalised and have strong balance sheets.

For their 2020 first-quarter, DBS, OCBC, and UOB had Common Equity Tier 1 capital adequacy ratio, a key measure of a bank’s financial strength, well above the MAS regulatory limit of 6.5%.

In fact, the ratio stood above 13% for all the banks.

It’s also heartening to note that MAS has taken into consideration investors’ needs by not calling banks to totally scrap dividends, unlike other regulators such as the Bank of England (BoE).

At the end of March, the BoE told major UK lenders to suspend dividends and buybacks until the end of 2020 while also cancelling outstanding 2019 dividends.

Why not check out the SeedlyCommunity and participate in the lively discussion regarding Singapore bank stocks and more!