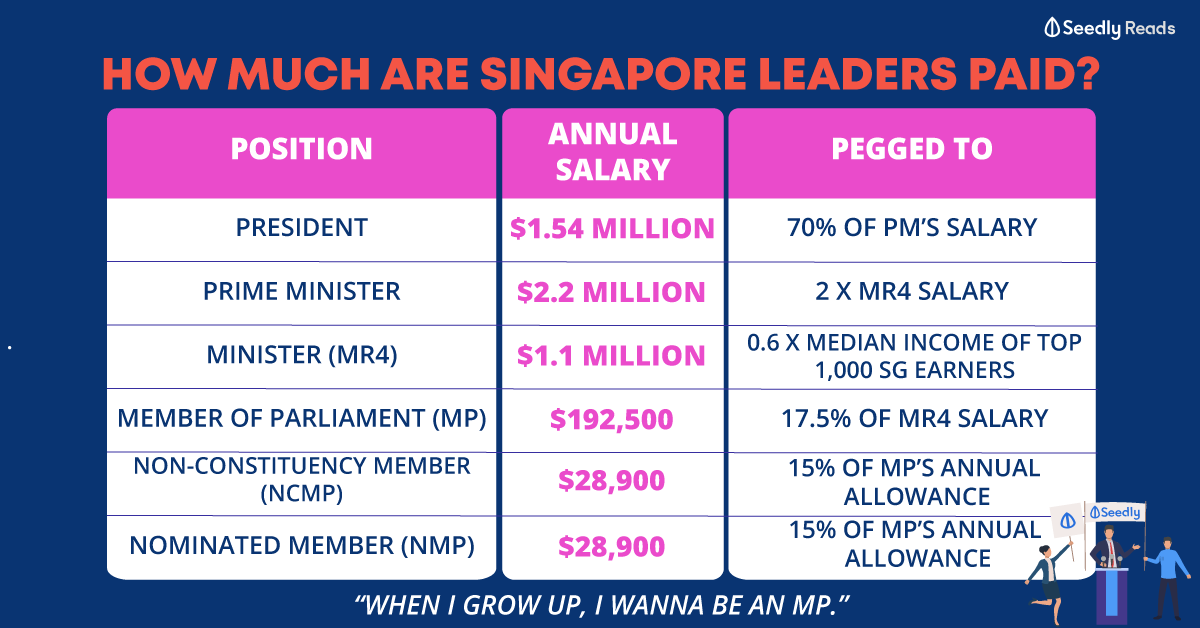 We are always curious about how much the government is being paid, as their big responsibilities do come with rather attractive salary packages.

The salaries of the country’s leaders are also always a hot topic among citizens.

We’ve heard a lot about the salaries of our Prime Minister.

We’ve also heard about the salaries of our President.

Now, what about our Members of Parliament (MPs)?

They are the ones whom we’ve seen most regularly, shaken hands with, and with photos taken together in our neighbourhoods.

TL;DR: Here’s How Much Our Members of Parliament (MPs) Are Paid

The main role of MPs is to act as a bridge between the community and the Government, ensuring that the concerns of their constituents are heard in Parliament.

This includes the Meet-The-People sessions, where weekly sessions are held at local constituency offices for the MPs to meet residents, to understand concerns on the ground level.

Elected MPs, as its name suggests, are elected during GE.

They have a dual role:

MPs are currently paid an allowance in a part-time manner, rather than a full-time role.

With the MPs’ role including political aspects, they should technically be pegged to the salary of political appointment holders, such as Ministers.

However, they do not have an executive role.

As such, they are given a monthly allowance, 13th-month bonus, and an Annual Variable Component (AVC).

This amount is pegged to 15% of the salary of the MR4 (Ministerial) benchmark.

This amount is based on the assumption of 1 month of AVC, with the annual MR4 benchmark salary to be $1.1 million.

In addition, MPs who are elected after 1 January 1995 are no longer eligible for pensions.

Note: The Prime Minister, Speaker, Deputy Speaker and political appointment holders will also receive MP allowances as they also hold the roles of being MPs.

NCMPs are members who were not voted in at a General Election but are voted seats in Parliament.

Up to 12 NCMPs from opposition parties can be appointed, to ensure a wide representation in the Parliament.

NMPs are appointed to ensure a wide representation of community views. They are not affiliated with any political party or constituency, and contribute to independent and non-partisan views in Parliament.

As compared to MPs, NMPs are not allowed to vote on matters which relates to the following:

NMPs represent varied interests of a wider group of Singaporeans, bringing up issues that might otherwise be not as prominent in the House.

For instance, they can provide a voice on topics like arts, environmental or social issues.

Allowances of NCMPs and NMPs

The allowances of NCMPs and NMPs are different from that of MPs, as they do not have community roles, due to not having constituents.

In addition, they also have a smaller legislative role due to the limitation in voting matters.

The annual allowance is structured the same way as an MP’s.

What It Takes to Be an MP

In case this article has sparked your interest and you’re like:

In short, you gotta be:

And of course, a sharp intellect and a likeable personality. 😉