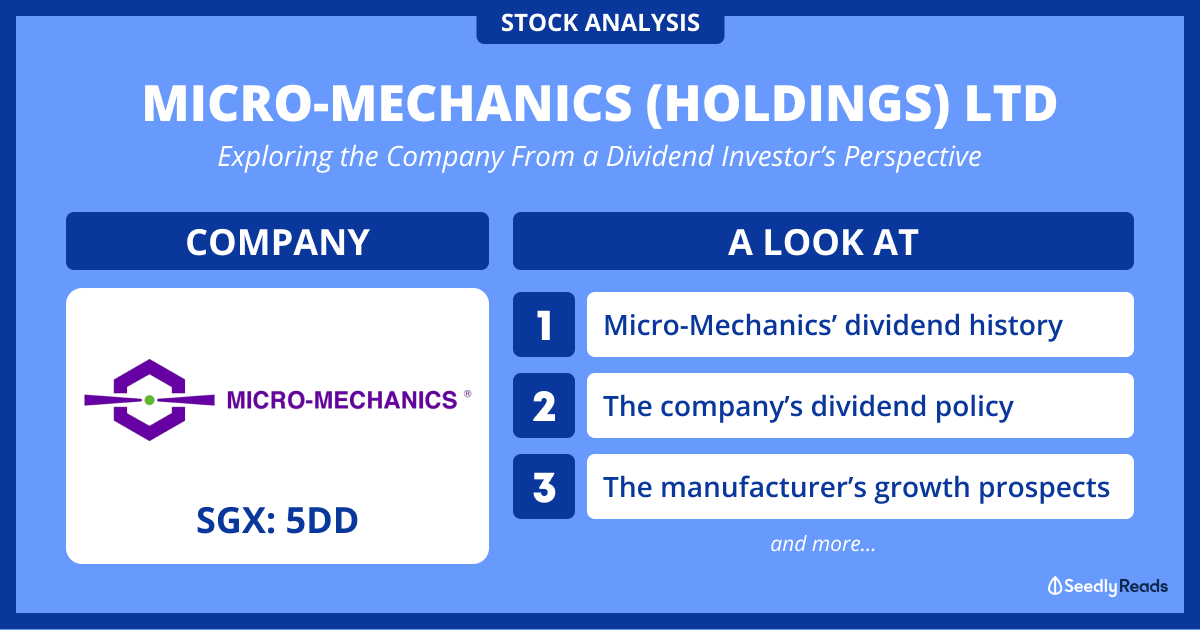 A trait income investors look out for is whether a company’s dividends have increased consistently over the long run.

One such firm that has been helping investors grow their passive income is Micro-Mechanics (Holdings) Ltd (SGX: 5DD), which is involved in the semiconductor industry.

In this article, let’s explore Micro-Mechanics from a dividend investor’s perspective, looking at its dividend yield, dividend history, and dividend sustainability.

We will also look at why the company has the potential to increase its dividends further for many years to come.

Micro-Mechanics last closed at S$3.21 per share on Friday.

At that share price, it has a trailing dividend yield of 4.4% (including special dividends, a regular feature since FY2015).

The SPDR STI ETF is an exchange-traded fund (ETF) that tracks the fundamentals of Singapore’s Straits Times Index (STI), and it can be taken as a proxy for the broader Singapore stock market.

For FY2021, Micro-Mechanics dished out a total dividend of 14.0 Singapore cents per share.

The following chart shows Micro-Mechanics’ dividend growth over the past 18 years:

Micro-Mechanics has a formal dividend policy, as stated in its annual report.

Since FY2016, its policy has been to declare 40% or more of its annual net profit as dividends.

Last but not the least, let’s look at whether Micro-Mechanics dividends are sustainable.

The dividend sustainability of a company is more important than its dividend yield.

Here’s how Micro-Mechanics’ dividend payout ratios have trended over the past five years.

The dividend payout ratio is the ratio of the total amount of dividends paid out to shareholders compared to the company’s earnings.

We can see that Micro-Mechanics’ dividend payouts have been over 100% of its earnings in recent years.

While I prefer companies to have dividend payout ratios of below 100% to be conservative, I believe that Micro-Mechanics will be able to sustain its dividends given its:

The following shows Micro-Mechanics’ financial highlights from FY2017 to FY2021:

Revenue, gross profit and net profit have all climbed in the past five financial years, apart from the dip in FY2019.

The company ended its latest financial year with a strong balance sheet of S$20.6 million in cash and zero debt.

It also clocked a commendable return on equity (ROE) of 31.2% in the same year.

Generally, a company with a history of generating strong ROE while having no debt has a high chance of possessing durable competitive advantages.

This competitive advantage allows Micro-Mechanics to continue growing its business over the long term.

According to VLSI Research, global chip sales could double to nearly US$1 trillion by 2030 from about US$450 billion in 2020.

Micro-Mechanics forecasts its total addressable market (TAM) for its business to be over US$500 million.

With the company’s revenue at around US$55 million in FY2021, Micro-Mechanics has plenty of room to grow its business in the coming years.

If Micro-Mechanics can capture more of its TAM and continue to have strict control over its operating expenses (which has been the case in the past), it should be able to raise its dividends for FY2022 and beyond.

Disclaimer: The information provided by Seedly serves as an educational piece and is not intended to be personalised investment advice. ​Readers should always do their own due diligence and consider their financial goals before investing in any stock. The writer owns shares in Micro-Mechanics.