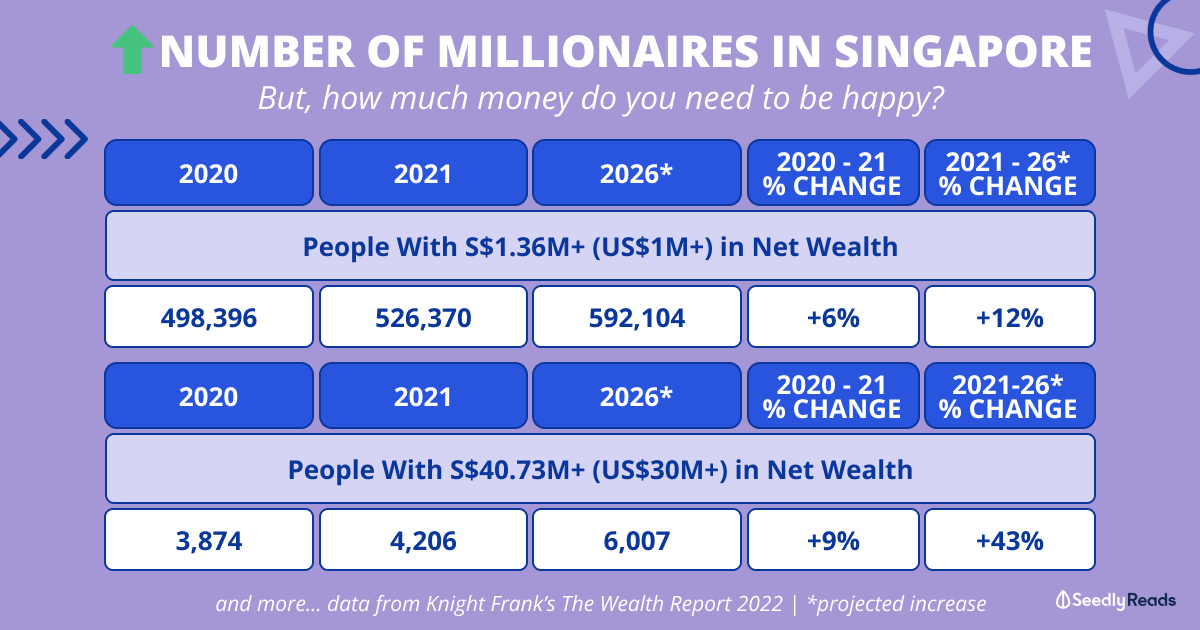 How Many Millionaires in Singapore Are There?

We all know that Singapore is the land of Crazy Rich Asians.

In fact, according to Knight Frank’s The Wealth Report 2022, there are a boatload of millionaires and billionaires in Singapore:

Note: Knight Frank estimates net wealth on a location-by-location basis using balance sheet data, where available, on households’ financial and non-financial wealth. Net wealth includes primary residences and second homes not owned primarily as investments, and it does not include Central Provident Fund (CPF) funds.
Also, Knight Frank defines a High-net-worth individual (HNWI) as someone with a net worth of US$1M (S$1.36M) or more, including their primary residence.
While an Ultra-high-net-worth individual (UHNWI) is someone with a net worth of US$30M (S$40.73M) or more, including their primary residence.

To put things into context, there are 4.5M people in Singapore as of end-June 2021 (via SingStat).

This means that ~12% of people in Singapore are at least millionaires.

That got me thinking.

Does having that much money buy happiness?

Here’s what the research says.

How Much Money Does The Average Person Need to Be Happy?

Although no single piece of research can answer this question definitively, this 2018 study published by Purdue University in the field of happiness research will be pretty helpful.

The researchers analysed data from the Gallup World Poll survey, where a representative sample of over 1.7 million individuals from 164 countries were surveyed.

They were then asked to rate their own current lives overall on that 0 to 10 scale.

FYI: This question is actually called the Cantril’s Self-Anchoring Striving Scale and is considered a more accurate and holistic method to measure happiness/subjective well-being/life satisfaction.

The researchers then studied the correlation between the Cantril ladder score and each individual’s income and found that people who earned more tend to be happier no matter which part of the world they are from.

However, the researchers also found that there was an income satiation point.

According to the APA Dictionary of Psychology, Satiation refers to:

As part of Southeast Asia, the income satiation point for the average person in Singapore is an annual income of ~S$93,000 (US$70,000).

This means that when people earned more than $93,000, their happiness levels tapered off.

This could possibly be the case where any increase in income beyond this income satiation point does not have too significant an effect on the person’s ability to lead a comfortable life.

In other words, for the average person, more income increases overall life satisfaction but with diminishing marginal returns.

But Millionaires Might Be Happier Than The Average Person

But, there are limits to the Purdue University study.

Although the Gallup survey can be considered statistically representative, millionaires like the top 1 per cent of the wealthiest people in Singapore are not as well-represented.

Also, the Gallup survey relies on the average person’s annual income, which generally has a more restricted range than people’s net worth, which can be accumulated over time and includes all assets in addition to income.

To examine this better, we will look at a study done by Economics Nobel Laureates Grant Donnelly and Micheal Norton and Emily Haisley at BlackRock and Tianyi Zheng at the University of Mannheim.

They surveyed about 4,000 millionaires about their wealth and happiness.

For wealth, the researchers asked the respondents about their current net worth.

For happiness, they were asked to rate their happiness on a 10 point scale.

More specifically, the US$10 million millionaires reported that they were about 0.25 points happier on a 10-point scale.

In other words, the research suggests that the more money both groups had, the happier they were.

How You Made The Wealth Matters

Also, the researchers found that when they controlled for total wealth, they found that the millionaires who were ‘self-made’ and earned their wealth through means like entrepreneurship, investing etc., were slightly happier than those who inherited the wealth.

Collectively, the two main findings and the results suggest that among millionaires, the increase in happiness benefits are only significant for the super-wealthy and when the wealth was earned rather than inherited.

The studies suggest that more income increases overall life satisfaction for the average person but with diminishing marginal returns.

But amongst millionaires who earn much more than S$93,000 a year, things might be a bit different, as Grant Donelly would attest:

“So, while we’ve believed before there is diminishing marginal utility, the curve doesn’t diminish as quickly as we once thought — and even when basic needs have been met, acquiring more wealth does increase happiness.”