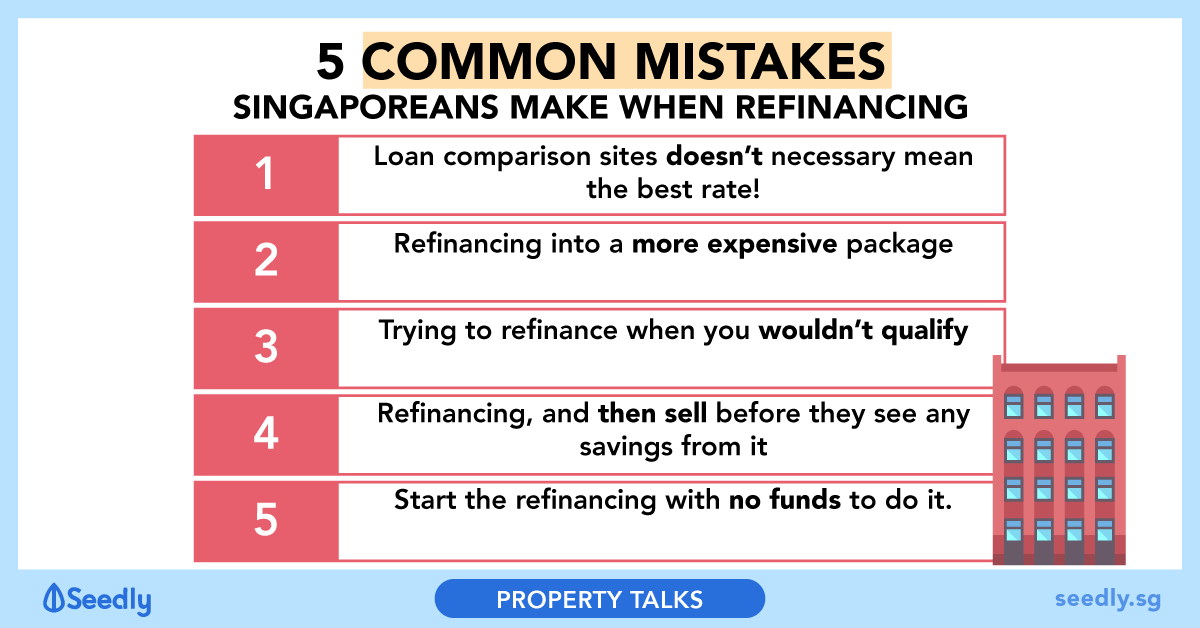 Okay be honest: how many of you switched off three minutes into the whole “why you should refinance” spiel by the mortgage broker/banker? Great, the three of you who paid attention can skip this article.

The rest of you, you might want to take note of how refinancing into a cheaper loan can go wrong:

1. Refinancing, And Then Selling Before They Really See Any Savings From It

Refinancing, like most things involving a bank, isn’t free. There’s a conveyancing fee of between $2,500 to $3,000, and some banks will stick you with other fees as well, like making you pay $500 for a valuation.

Now if you’re intending to sell, you want to make sure you make back the cost of refinancing, plus a little bit extra. So, say you have a loan for $1.125 million, at two per cent interest for 30 years. That means you’re paying $4,158 per month.

If you manage to refinance into a package that’s at 1.7 per cent interest, you’re only paying $3,991 per month. That’s a savings of $167 per month. Assuming your refinancing cost $2,500, you would take about 15 months just to break even. Your actual savings only start after that.

So if you intend to sell your house in, say, 24 months, you’re only really saving $1,503. You decide if that’s worth the effort of the paperwork (or get a mortgage broker to do the paperwork for free).

And if you refinance like this, while intending to sell your house in 12 months, email your old school and suggest they fire your maths teacher.

2. Refinancing Into A More Expensive Package

For SIBOR loans, rates are always lower in the first three years but jump on the fourth. But that’s not a problem right? You can always refinance on the fourth year or later…so you think.

But consider if your loan right now has a “fourth year and thereafter” rate of about 2.2 per cent. You refinance into another loan that’s at 1.7 per cent for the first three years, and 2.4 per cent on the fourth year (because you think when that times come, you’ll just refinance again).

But what if, when the time comes to refinance, you find out all the other rates are priced at way above 2.4 per cent? Remember, home loan rates have been at a record low for 10 years now, and it’s unlikely they’ll go in any direction other than up.

By switching to an apparently cheaper loan, you could find yourself stuck in a more expensive package. Think long term, rather than being too quick to jump on cheap teaser rates.

3. Trying To Refinance When You Wouldn’t Qualify Under The New Restrictions

There are a whole host of restrictions on how much you can borrow these days – such as the TDSR. Now if you got your home loan a long time ago – like in the 1990s or early 2000s, you weren’t subject to these restrictions. Heck! Back in the ’90s, a homeless man’s cat could walk into the bank and leave with a 30-year mortgage.

When you refinance your loan, however, you’ll be subject to all the new restrictions. This could mean your loan tenure will have to be shortened (thus causing monthly repayments to actually go up), or that you can’t even qualify for a home loan under the new rules.

Sometimes, it’s better not to rock the boat. You may want to leave your home loan as is, especially if you were a bit over-leveraged when you first bought the house.

4. Thinking You Found The Best Rate Because You Used A Loan Comparison Site

When you see a “cheapest flight ticket” online, do you really believe that’s the cheapest ticket? Because we have news for you: it’s 99 per cent likely that someone managed to get an even better deal than that, because their cousin/mother/blackmail victim works for the airline.

The same kind of goes for home loans. We hate to tell you this, but those “cheapest home loans” you find online probably aren’t. A mortgage broker can actually bargain the rates down even further, such as by convincing the mortgage banker to take less of a commission.

There are a lot of negotiations that can happen between a broker and a bank; so think about that before you decide to bypass the broker, and just call the bank yourself. (Sometimes, you may not even get the advertised rate if you call the bank directly – you may need to apply through a certain broker).

5. Start The Refinancing With No Funds To Do It

See point 1. You want to make sure you have about $3,000 or so in funds before you attempt to refinance. Because there really are people who try to refinance, find they don’t have enough to pay for the administrative costs, and then take a personal loan or credit card to pay the refinancing cost.

This is beyond ridiculous. What’s the point of refinancing from, say, 2 per cent to 1.7 per cent, when you’re going to a 6 per cent per annum loan to do it? That’s like selling $10 notes for $8.

So please, don’t end up using a credit card or something to pay valuation fees, etc. when refinancing. Unless you’re going to pay it off in full to avoid the interest, that would just defeat the entire purpose.